We drove. A lot. And had to keep stopping, because after yesterday’s unpleasant digestive issues, I was paranoid. I didn’t want a repeat of emergency pooping in a field somewhere.

Also, the dogs had run out of dog food, and the only pet food store we could find was in the middle of Cheyenne, which resulted in a lengthy diversion.

Also, I missed my window for breakfast, because with the antibiotics, I can’t eat for two hours before taking it or one hour after…

So by the time lunch rolled around, I was starving, and so were the dogs. We all had Wendy’s. After eating our meals, I hand-fed the dogs some junior cheeseburgers and chicken nuggets in the back seat while Kay drove. The dogs didn’t complain.

Wyoming continued to be pretty this morning, until we passed Cheyenne, at which point it got as boring as Kay remembered it from his trip around the US in 2009.

When we got to Nebraska, we stopped at the visitor center for a potty break, and the woman there was very interested in helping us. Being me, I couldn’t just pop in for a quick pee, so I ended up chatting her up. 20 minutes later, I had a bunch of recommendations for stuff to see – and we’ll probably miss every one of them – which I feel bad about after all the time she spent telling us about them, and they did sound cool, but we’re just so pressed for time at this point that we can’t really spend much time exploring.

Especially when my tummy is still insisting on being unhappy. Stupid antibiotics.

On the bright side, I was extra attentive to my digestive system today, which means I stopped frequently and discovered a new truck stop – Sapp Bros. I think it’s a chain that mostly exists in Nebraska – I encountered the first one on the outskirts of Wyoming – but one of their main things is that they have ‘amazing bathrooms.’

Now, as someone who needs a bathroom particularly direly at the moment, I was very interested in this claim. Especially after the first stop at Sapp Bros. turned up a Japanese-style toilet with a heated seat and a bidet! What?! In a travel plaza? Sign me up! 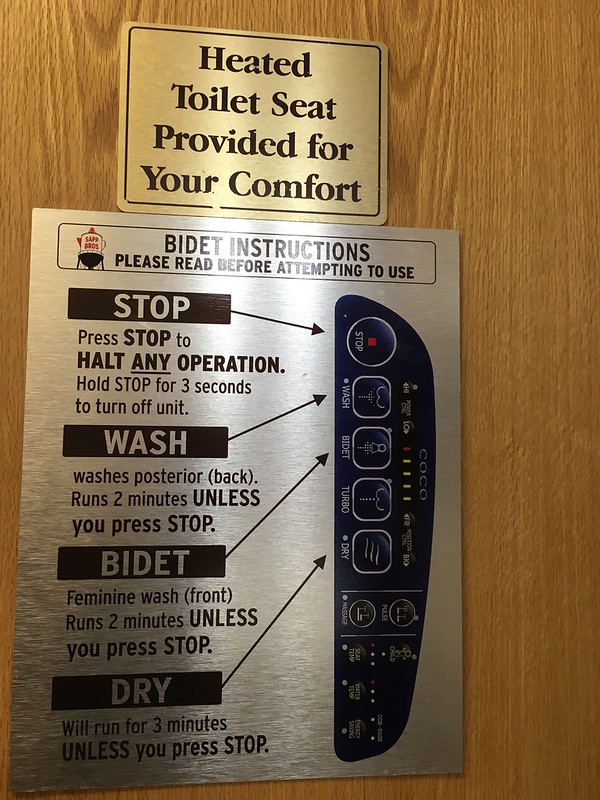 Thus began the next several hours of stopping when I encountered a Sapp Bros. to gather more data. Were they all this amazing? What exactly did the ‘amazing bathroom’ entail? And were the men’s bathrooms as amazing?

Now that I’ve checked three locations, I can confirm that the women’s bathrooms are pretty darn impressive. Each stall is an individual room, which contains its own sink, paper towel dispenser, trash can, and even a sharps disposal receptacle – presumably for traveling diabetics? The full floor-to-ceiling walls and doors give a measure of privacy you don’t get elsewhere. They all had nice coat hooks, and most had a place to put a purse or bag that wasn’t on the floor. And all of them had bidets and heated toilet seats.

After I explored the second one, Kay checked out the men’s room an discovered it wasn’t nearly as nice. Neither was the men’s room in the third location. He pointed out that it’s the women’s bathroom that matters. I guess, but I was still disappointed for him that they didn’t have heated toilet seats and bidets in the men’s room.

Overall, though, if I’m looking at where to use the bathroom in upcoming towns, I’ll choose a Sapp Bros. from now on when I can. 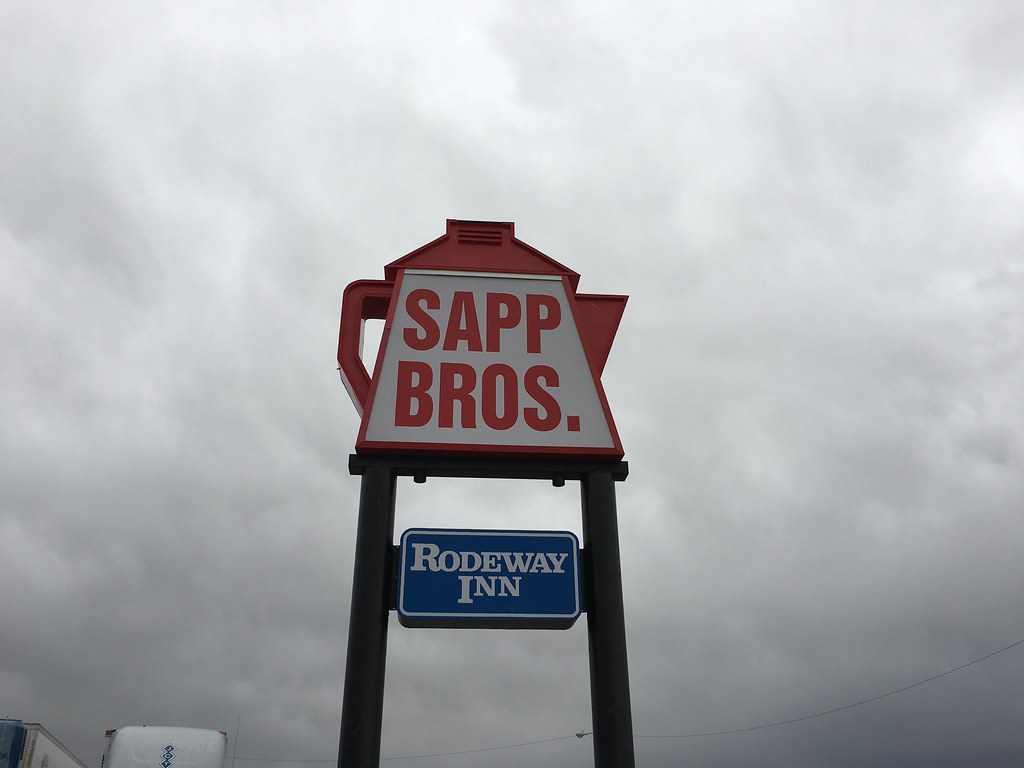 Also, I want to buy a fancy pants toilet for our house now. Or at least, a heated toilet seat.

The other note of interest is that as we drove on into Nebraska, we kept going into and out of thunderstorms. I grew up in Indiana, so I’m accustomed to the kind of storms we get in the Midwest, but the clear viewing distance in Nebraska made for some particularly impressive vistas. This storm was chasing us as we drove: 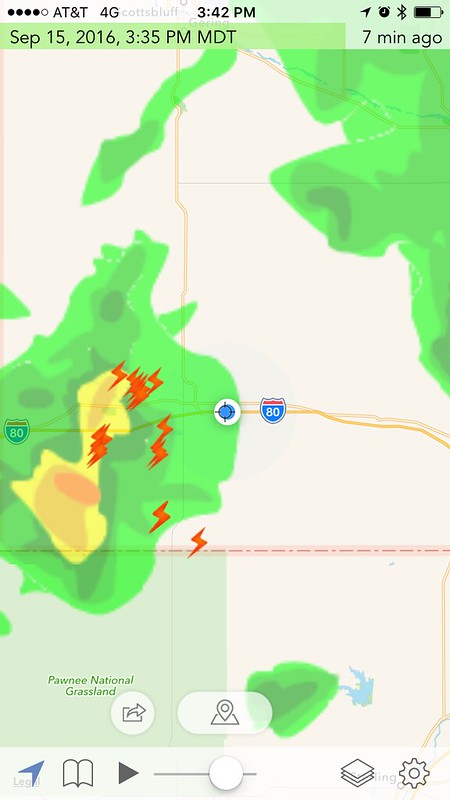 And this is what it looked liked in person (a lot more impressive): 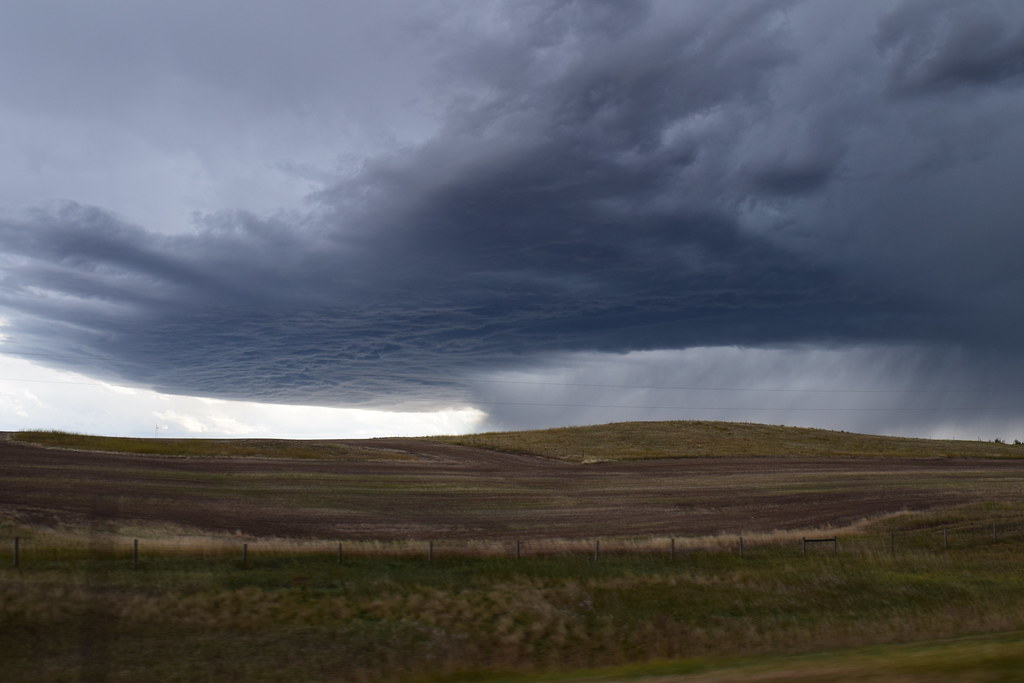 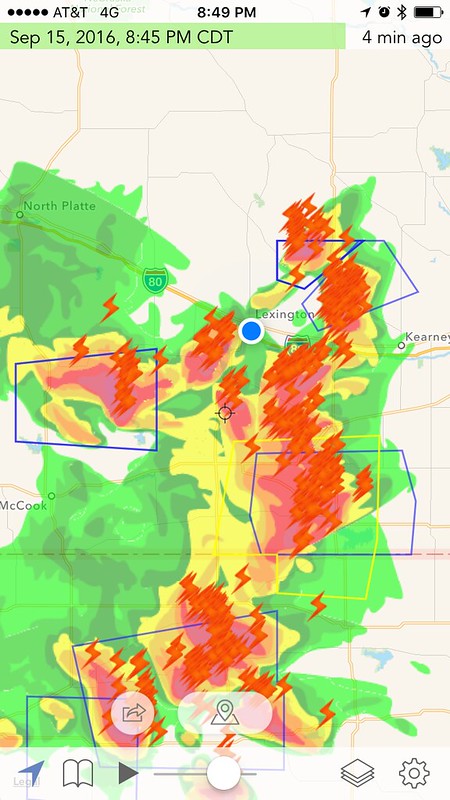 [Kay’s note] This was absolutely amazing to be driving towards. There was a constant series of intra-cloud strikes within perfect view as I drove. This was mind-blowing for me as I’d never lived in an area where this kind of thing happened. [end Kay’s note]

By the time we got to Lexington, NE, there was a constant stream of lightning from all areas of the sky. I checked Dark Sky, which is an app we LOVE for walking the dogs – it tells you to the minute what the rain is going to do – and saw that we had 9 minutes to check in, unload the car, walk the dogs and get everything into the hotel before we got soaked. Kay walked the dogs and started assembling our stuff while I checked us in, and then we drove the car around to the side of the hotel closest to our room and piled everyone into the building. We made it inside with a couple of minutes to spare. Yay, efficiency! 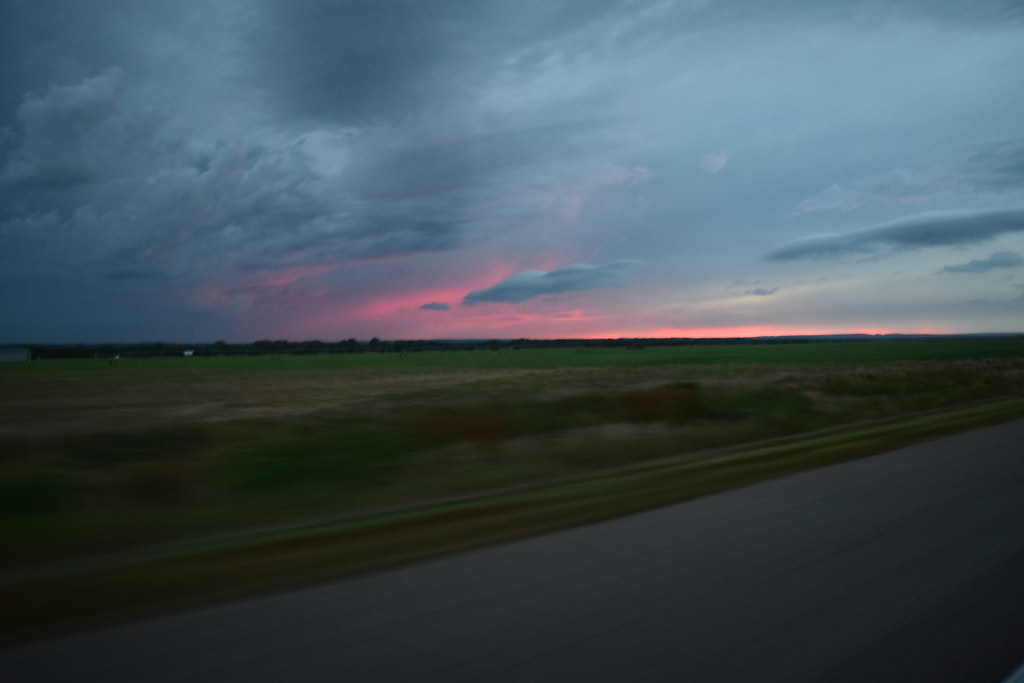 Kay went back out to try to get some pictures of the lightning in the dark, while I stayed and threw peanuts around our hotel room for the dogs to chase to keep them occupied. It’s one of their favorite games, and a good excuse to get them moving and stimulated after a day of being mostly cooped up in the car. 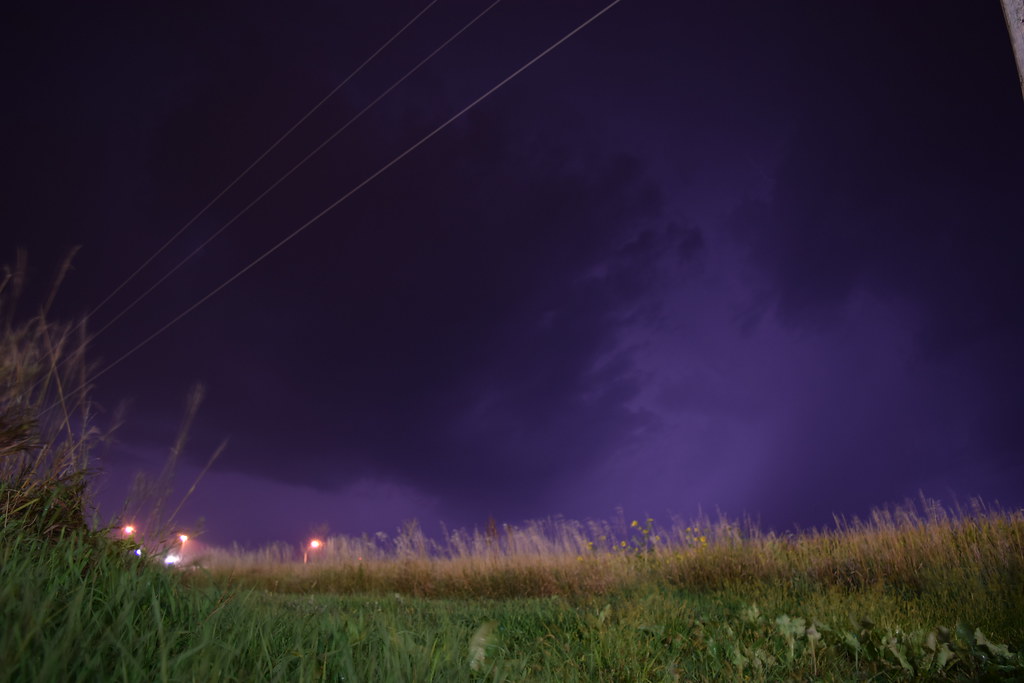 Alas, light pollution meant Kay only had one angle he could shoot. But he did enjoy the experience, as someone who didn’t grow up with this kind of weather.