We got up early today because we knew we would be crossing a time zone and loosing an hour today.
Just outside of town, we started commenting on the curious cloud that had been pushed down along the mountain range before us. Then, we found ourselves driving through it. 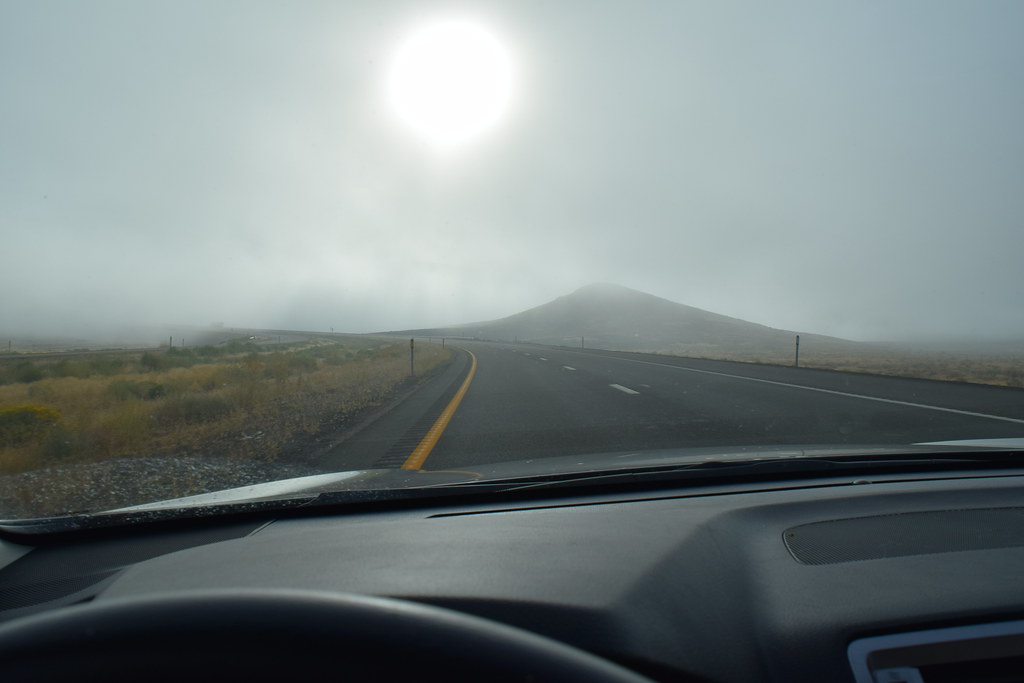 The landscape on the other side was pretty cool too… 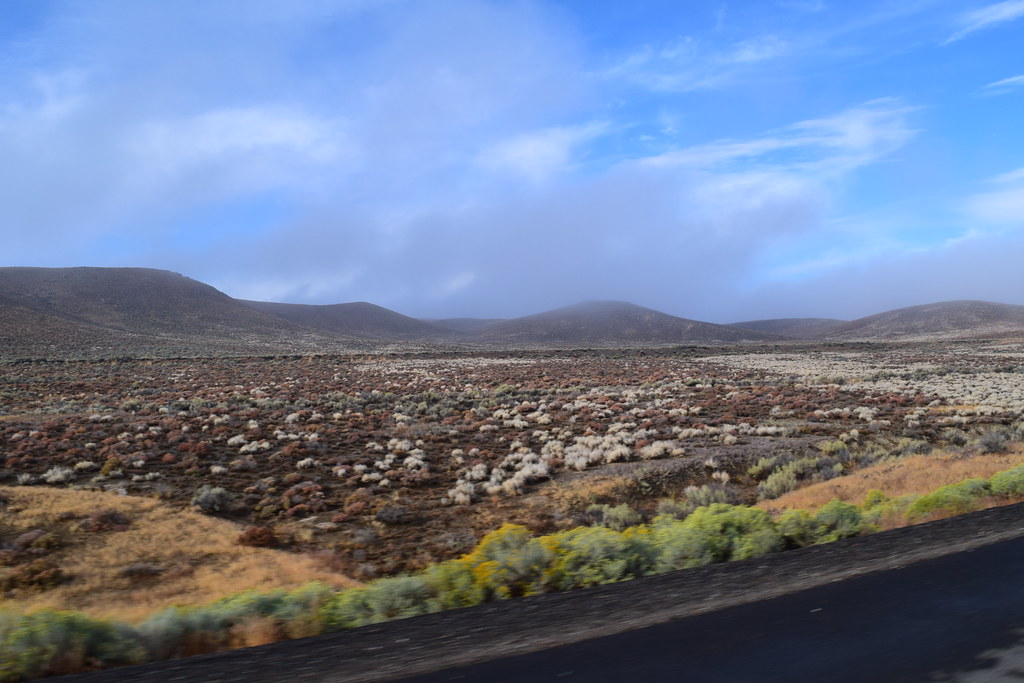 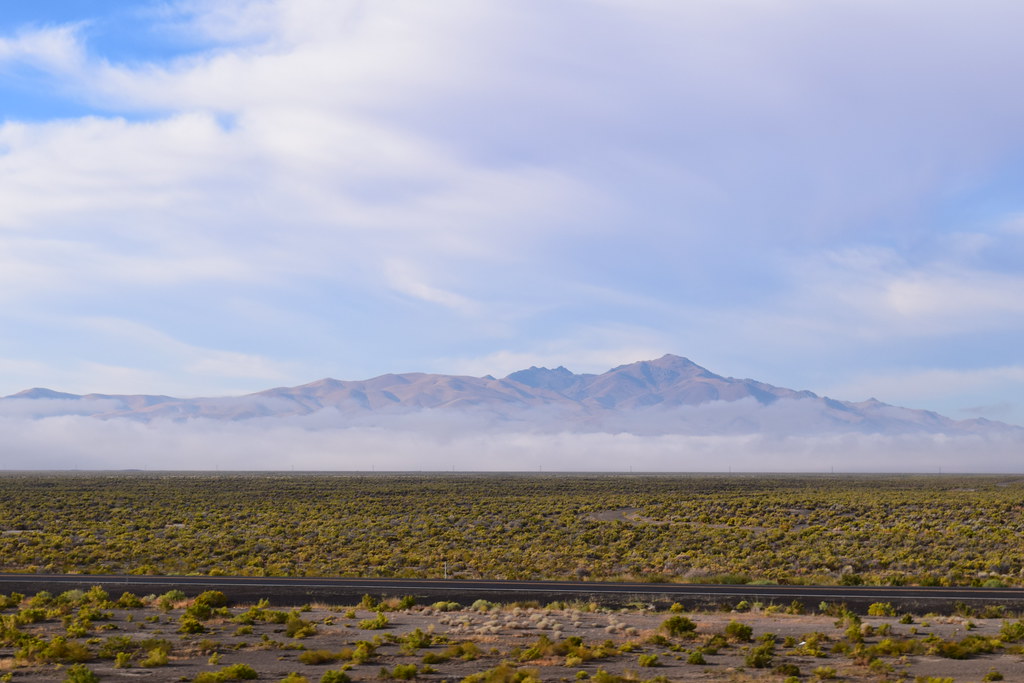 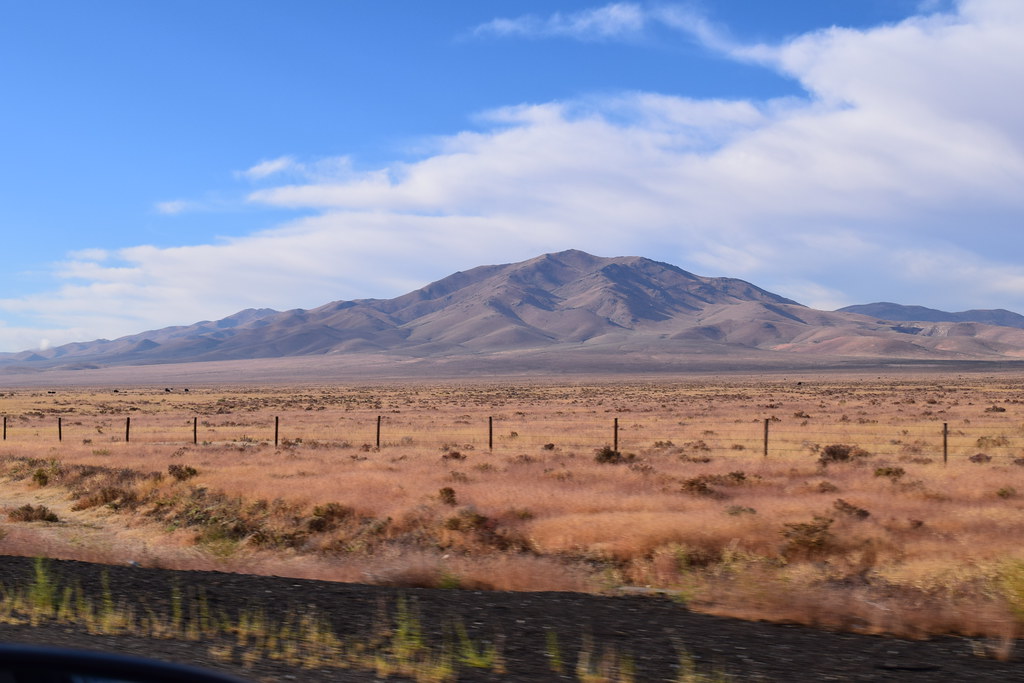 We’d stopped at a diner on the way out of town, because the previous night’s hotel, despite being awesome, didn’t offer a complimentary breakfast. Either the sunny-side-up eggs she received from there, or the penicillin she’s been taking, decided to have a dramatic effect around eleven, and Dachary, who was driving, informed me to find a place for her to use the bathroom now. There were none. There were only side roads with no services for the next twenty or thirty minutes. That would have to do.

We pulled off at the next one. As we’d approached I’d spotted a dirt road off of it, and figured we could turn down that and have some modicum of privacy. After turning off though Dachary said “where?!”

“Just ahead, on the right”. I noticed a little turn off / entry to a dirt road on the right just before us and said “or you could pull over there.” It was stupid. I should have kept my mouth shut. She was desperate. She pulled over. We angled the car, opened the door for a little cover, and she grabbed the emergency port-a-potty seat…. thing. It’s a toilet seat with a bag, but it’s better than pooping on your shoes. I’d completely forgotten about the thing. She had not.

Of course, the moment she sits on it a truck rolls by slowly. Then the truck comes back a minute later and I have to obscure her from its view. Then a car comes from that direction and honks at us. Dachary is muttering a constant stream of apologies. I’m feeling like a jerk for not just waiting the extra twenty seconds for the dirt road. The dogs are confused as to why we have stopped and not provided them with anything to bark at.

[Dachary] Oh my god, this was pretty much the worst thing EVAR. I’d had one really bad upset tummy emergency in Chile, which was probably brought on by bad water, but having this issue in the US seems so much worse. We’ve got such good infrastructure in general, and I thought I could push on until the next place to stop… but it became clear that I needed an immediate solution, or risk soiling myself and the car. At least in Chile, I was able to go find some bushes to hide behind… having to do this right in front of my hubby, with only the car for scant shelter, and then having two cars drive by whilst doing it… if I could have disappeared right into the ground, I would have. I love Kay, but I would rather have had him far away whilst having that kind of emergency… there are some things you just can’t unsee. And to be experiencing this kind of loss of dignity in front of total strangers? Wow. I basically have no hubris anymore. Can’t, after a moment like that.

Here’s the thing, though – this is the kind of thing that so few people talk about with extended traveling. Not every day is rainbows and puppy dogs (although we did have that a few days ago!) Shit happens, sometimes literally. And while it was mortifying, yes, we found a way to deal with it. And yes, it was unpleasant, but it didn’t ruin my day. Although if I hadn’t been able to pull off the interstate, it might have… I cringe to think of what I’d have had to do if it had been in one of the endless construction zones, or mountain passes, we drove through today…[/End Dachary Note]

The next hour is filled with a stream of bathroom visitations, and revisitations, along with a stop for food, gas, and more bathrooms.

During one of the stops I watched a concrete wall being built. It was pretty cool. The yellow machine is moving forwards at an almost imperceptibly slow pace, while 2 guys shove rebar into the “in” side, and 2 other guys take a trowel to the “out” side. It was pretty cool, until one of them smashed his foot with something and did the “I’m in too much pain to make a sound” walk, squat, grab head, stand up, and limp-around dance. 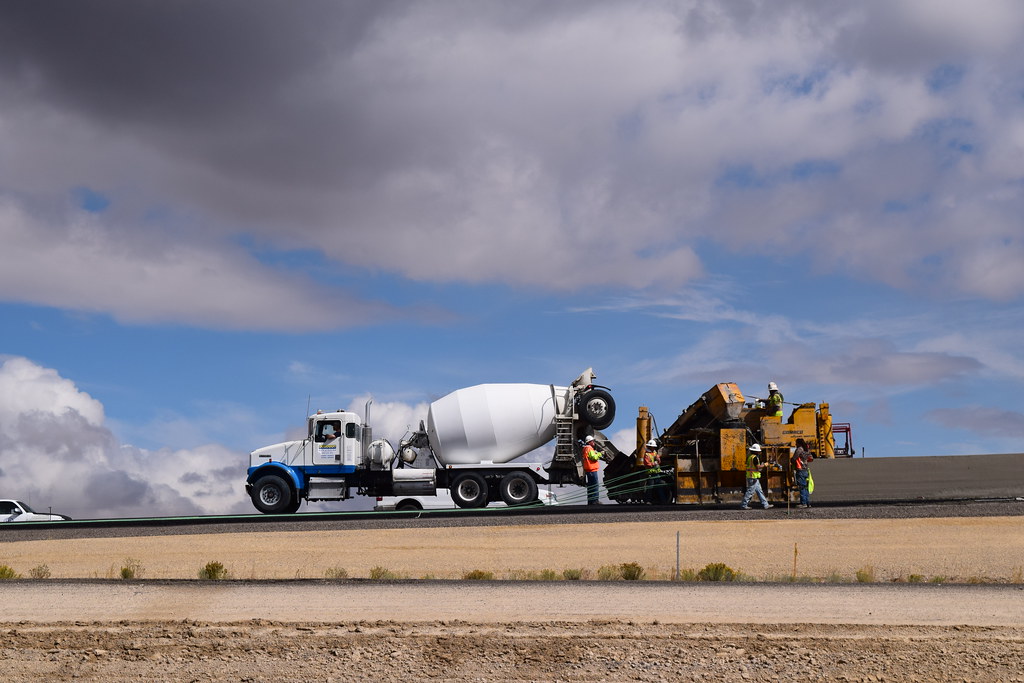 Eventually, the emergency passed, and we crossed into Utah, where the Bonneville Salt Flats lives. It’s literally up against I-80, and we couldn’t not take the short detour to the “viewing area” just off the highway. 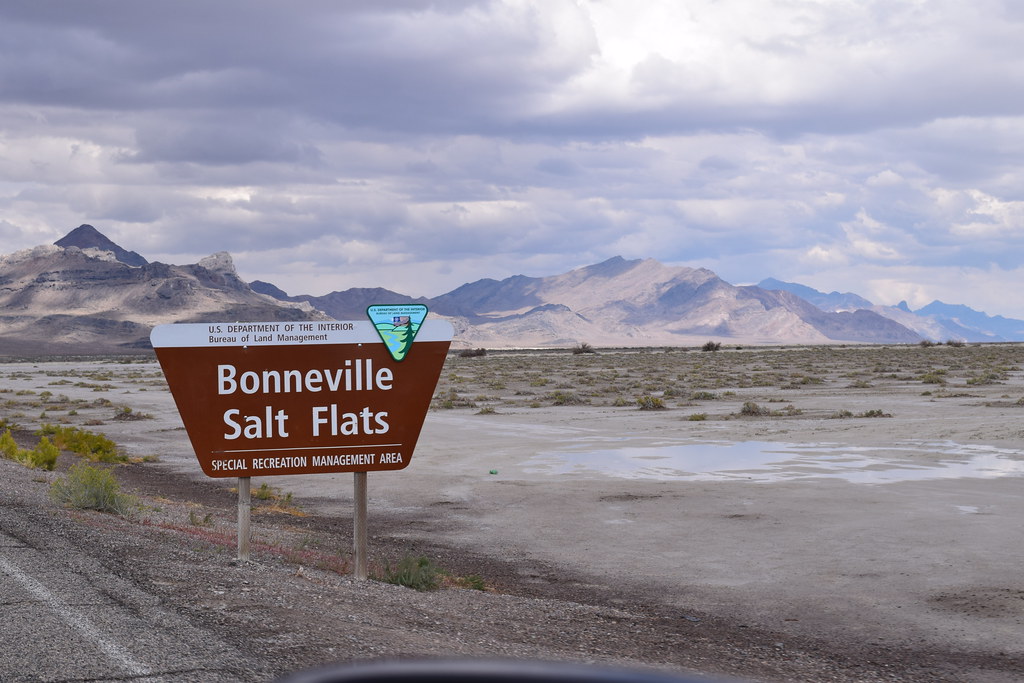 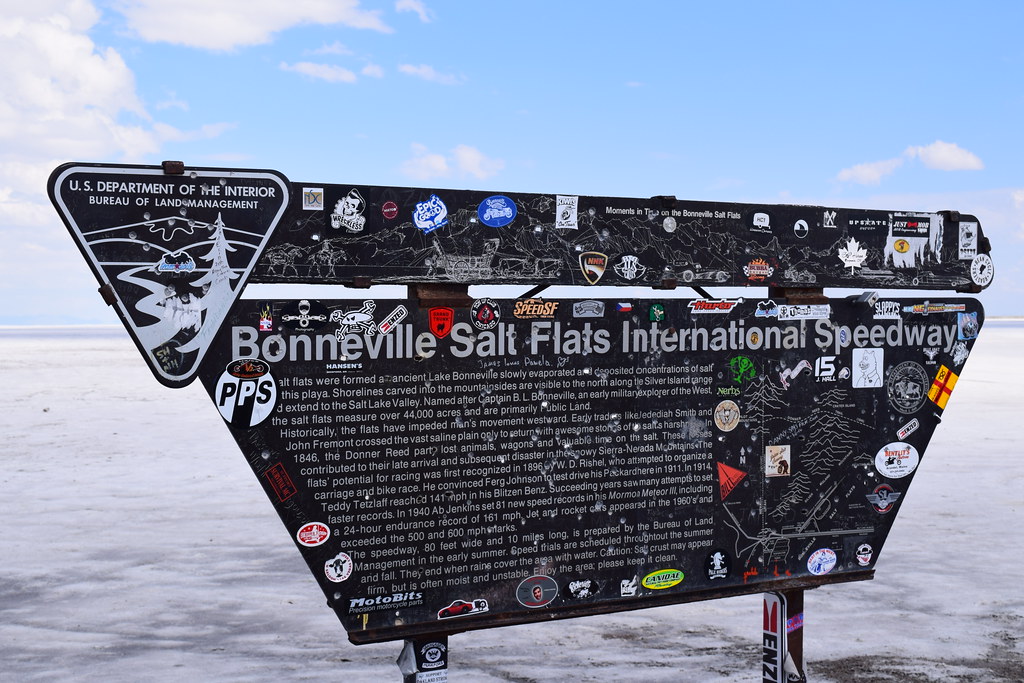 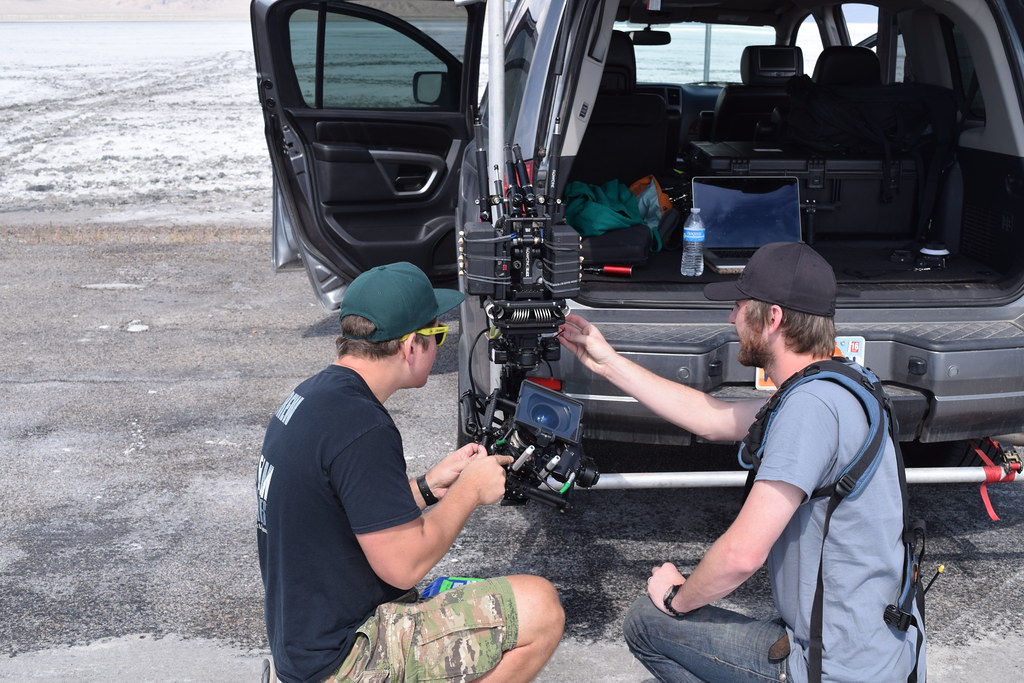 We’re pretty sure they were about t start shooting an ad for some new Volkswagens.

The rest of the day progressed pretty much without incident. Driving. Hunting for hotel. Driving. Etc.