Grants Pass, OR to Redding, CA

Leaving Grants Pass was uneventful. I tried stopping at one of the coffee shacks that seem to be so ubiquitous here out West (it got good reviews on Yelp, but I probably wouldn’t have picked it if I’d known it was a coffee shack) but the mocha turned out to be not drinkable – I trashed it at the first rest stop. Seattle and PDX, I miss you already.

Continuing along twisty roads, we made it to California! This trip has been my first time to the West Coast, so I’m glad I was able to hit all the coastal states. And Kay hasn’t been in California since he was a kid, and he’d never been to northern California, so we were both a little excited to reach the ultimate state on our trip. Everything else from here on out will be returning home.

We eventually hit Jedediah Smith Redwoods State Park visitor’s center, where Kay went to ask if there were any trails where we could take the dogs walking. (That’s the big drawback of visiting National Parks with dogs – dogs aren’t allowed on any of the trails, and can basically only be outside the vehicle anywhere a car can go. I.e. campgrounds, visitor’s centers, etc. – paved roads, or unpaved roads in *some* parks.) There weren’t any, but the helpful ranger did clue us in on a dirt road that took a nice loop through the state park, and a couple of other roads farther south.

Alas, by this point I was crashing due to lack of food, so I needed us to run the 15 minutes into Crescent City to find a soft food purveyor for me. I cannot state enough what a pain it is to have to find soft foods while on vacation. Happily for us, some careful Yelping turned up Vita Cucina Bakery & Gourmet Foods. I got soup, while Kay got quiche and a piece of delicious crusty bread – and we were both raving about the food while we sat in the car to enjoy lunch. Kay lamented that we didn’t live near the place, because he’d want to eat there often – and the outside of the store doesn’t do the food justice. I just enjoyed the tastiest meal I’ve had since my wisdom tooth went wonky. It was so tasty, in fact, that I went back inside and got a cup of the other soup of the day I could take with me for later snacking, since we’d be traveling through sparsely-populated areas and I might have a hard time finding more soft food. Kay had already gone back for a pesto and cheese covered bread that he’d taken a free sample of after placing our first order.

After refreshing ourselves with tasty food, we headed back past the Jedediah Smith Redwoods State Park visitor center and took the road to Stout Grove. After not long, the road turned into dirt… and became utterly beautiful. This was an amazing road. It twisted through the trees, only one lane wide in most places, and you crept through the forest dwarfed by these giant, ancient trees… it felt like being in Jurassic Park. I kept waiting to get a glimpse of dinosaurs off through the trees. I was so glad the ranger told Kay about this road, and that we’d backtracked to take it, because it was easily one of the highlights of the trip – if not the highlight. 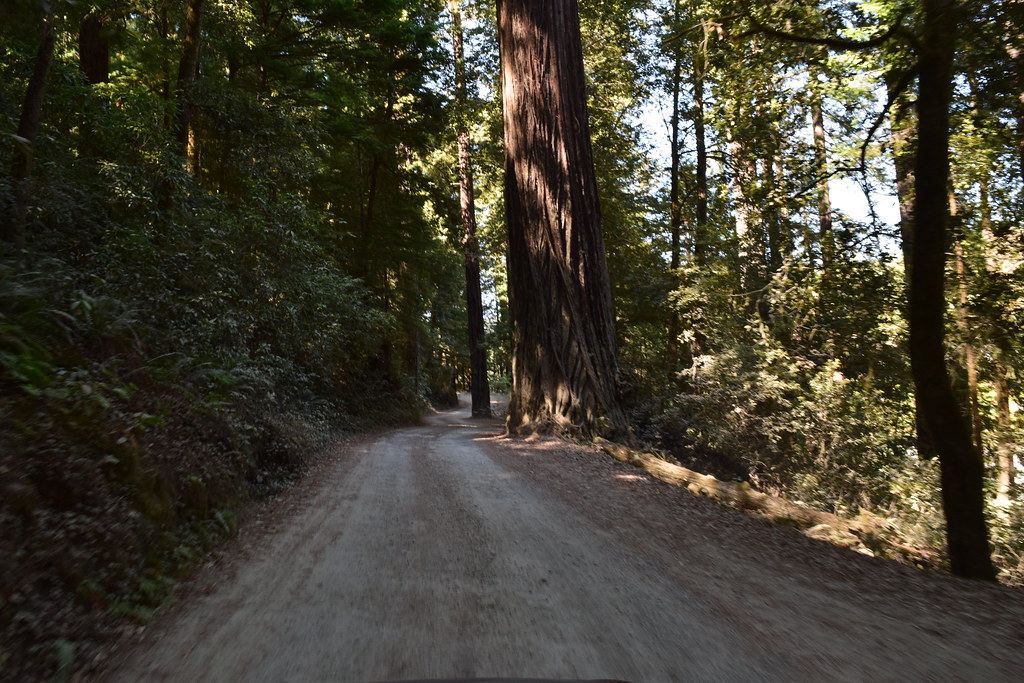 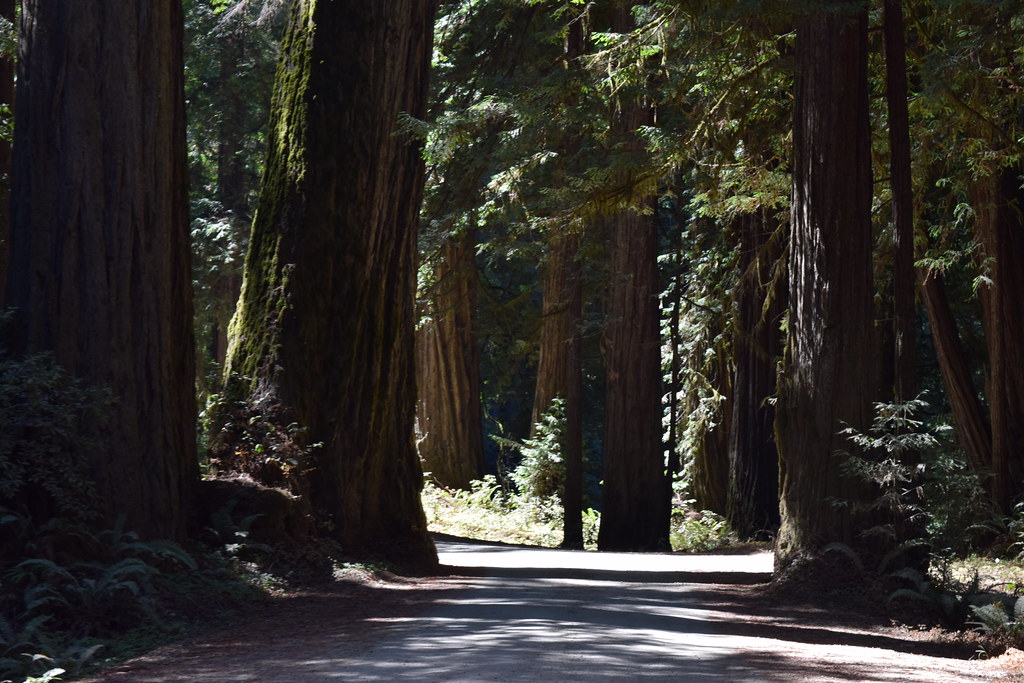 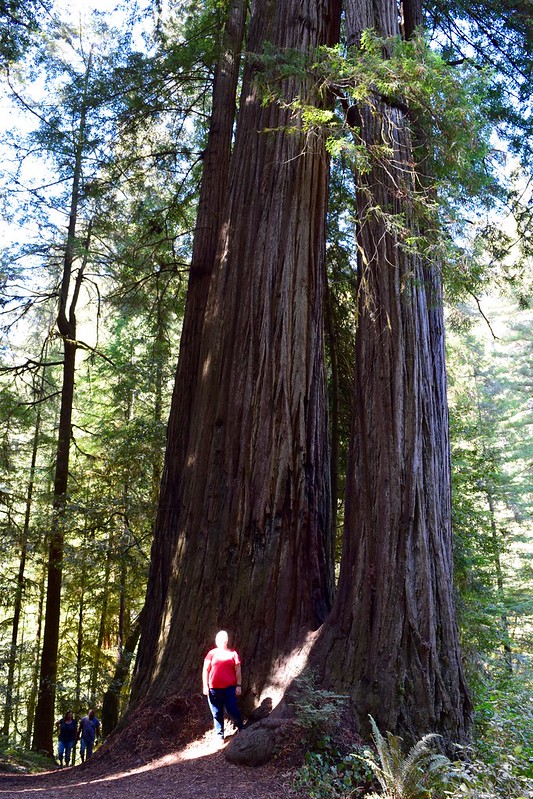 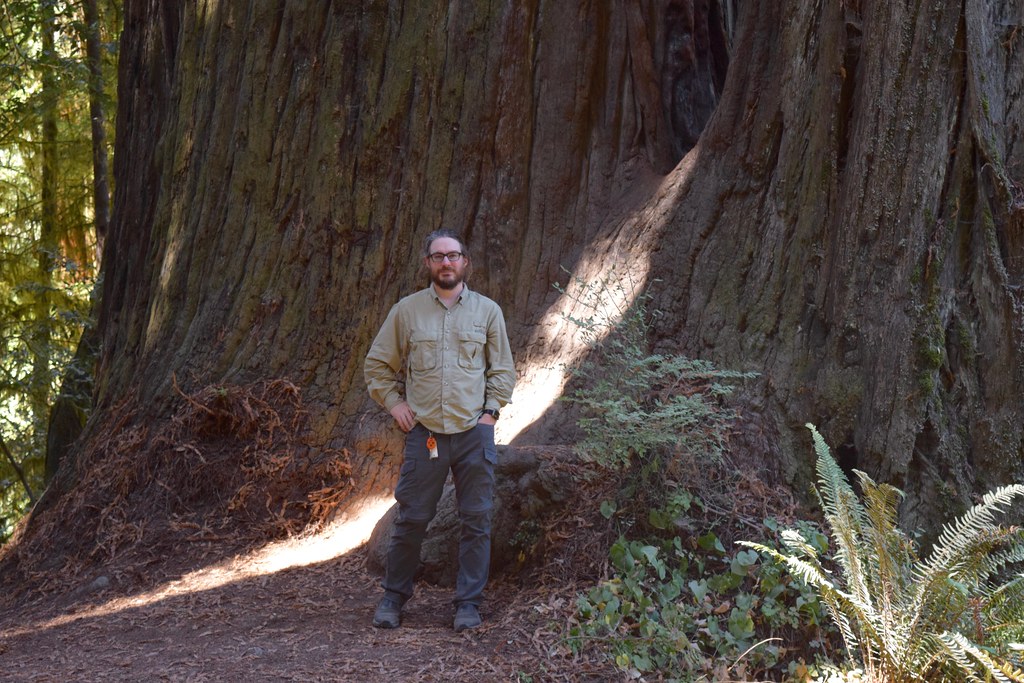 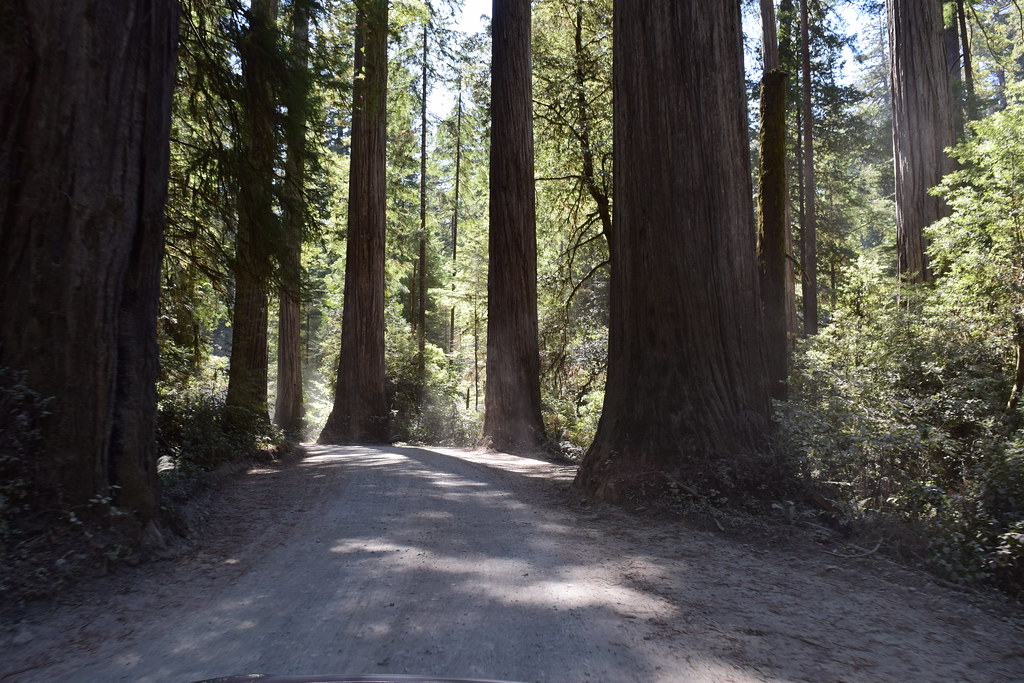 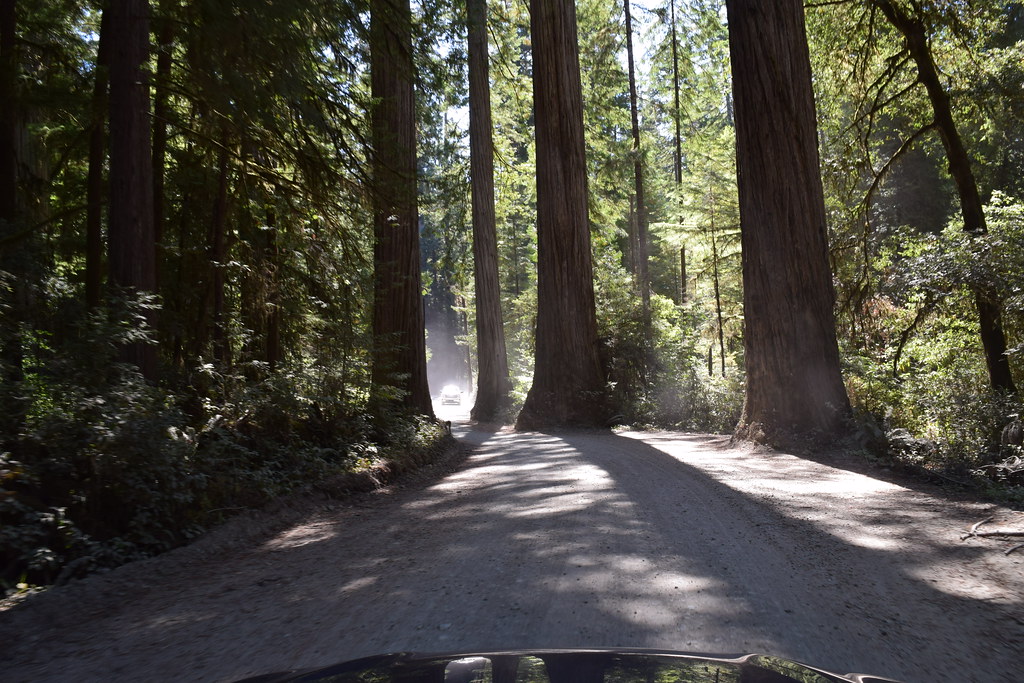 After rejoining the main road, we headed south, where we pulled off at the first dog-friendly beach so I could dip my feet in the Pacific Ocean! West coast, baby! It’s a lot warmer than the Atlantic in New England, let me tell you. Lita had fun zooming on the beach, too, until she decided to go hassle a local and we thought it best to depart. 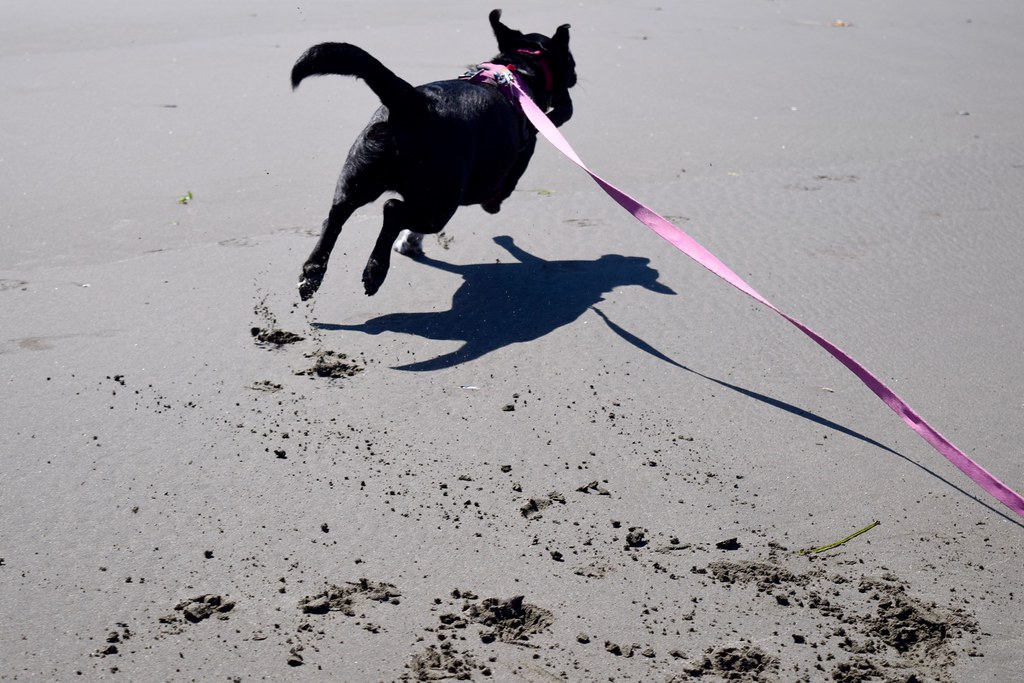 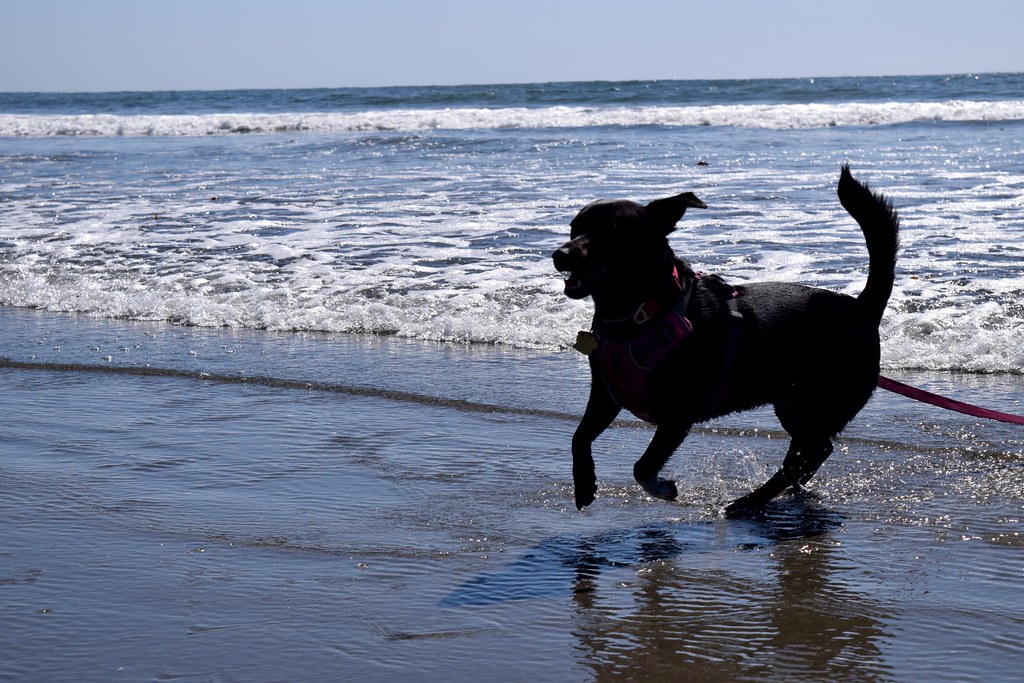 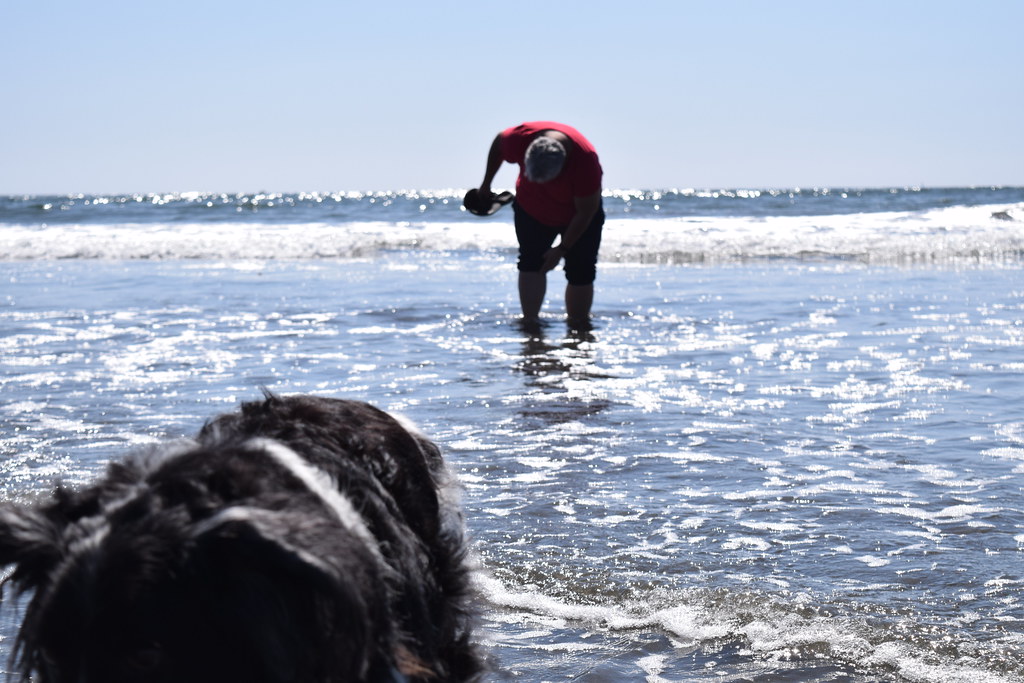 More driving south, we skipped an overlook that would take about an hour to view in order to have time to take another dirt road that Kay was dying to try. I know my hubby, and he would have been so disappointed to miss that road, so I mapped us a route that would get us to Redding via twisty back roads that would eventually join up with the ‘main’ scenic highway again. 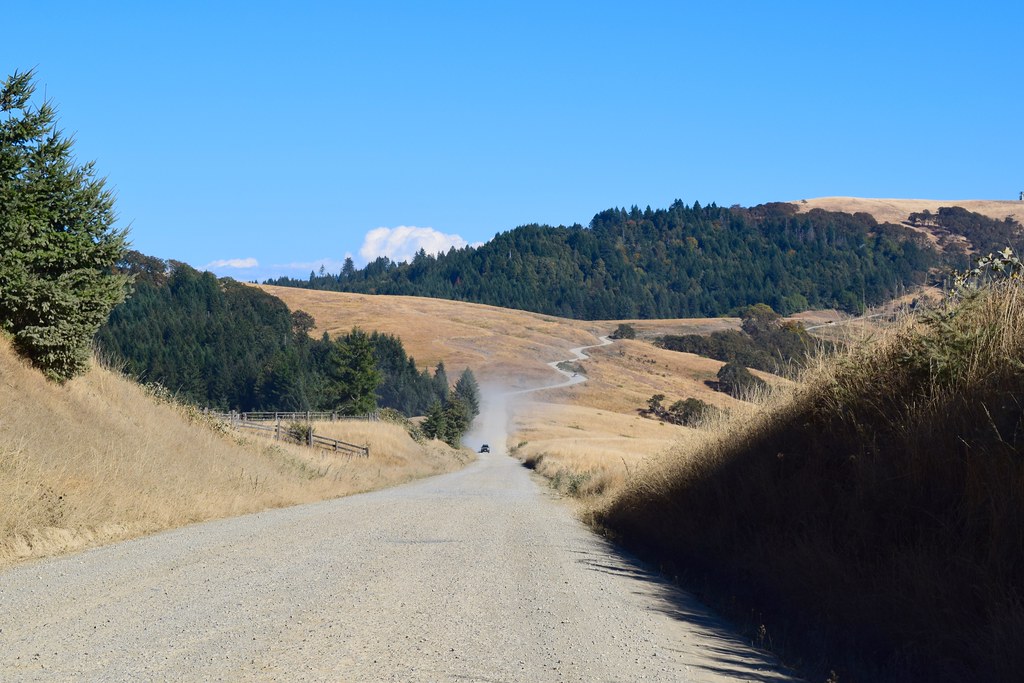 It was pretty, but not as good as the dirt road through the redwoods earlier in the day, I think.

On the way back to the main road, after the dirt ended, Kay fought for every mile along the twisty, mostly-one-lane back road that was inexplicably signed as 55MPH. NO WAY was that road 55MPH. We kept finding ourselves going 30, and having to give way to oncoming traffic that wasn’t nearly as concerned about speed (and did I mention the lack of guardrails along a twisty mountain road?) so it was more than a little stressful.

Eventually, we did rejoin the main scenic highway… which was a two-lane twisty mountain road. 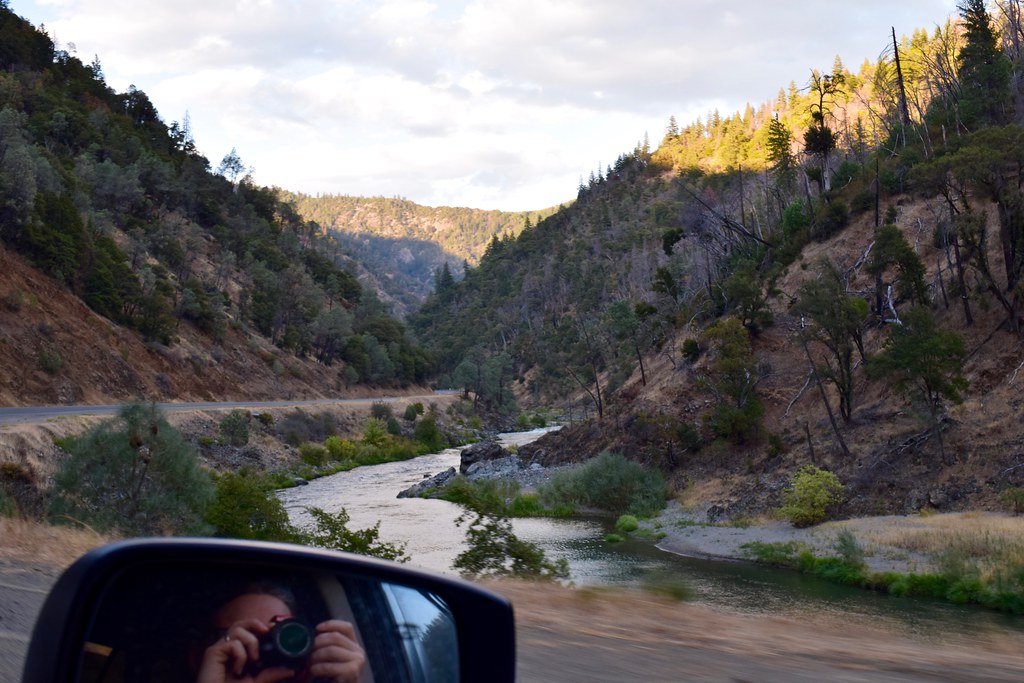 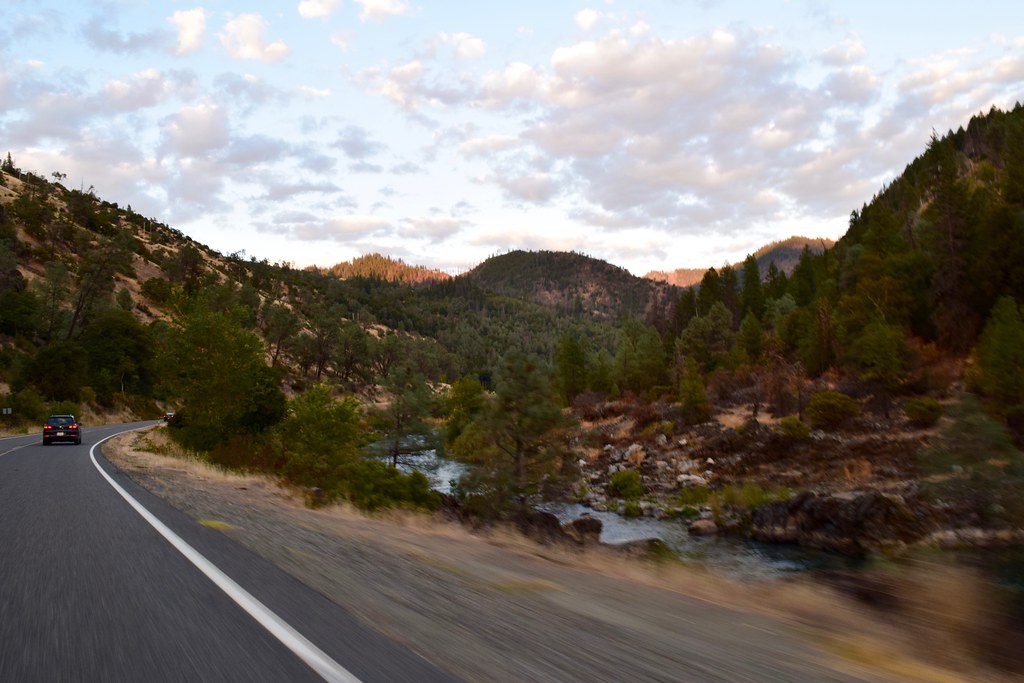 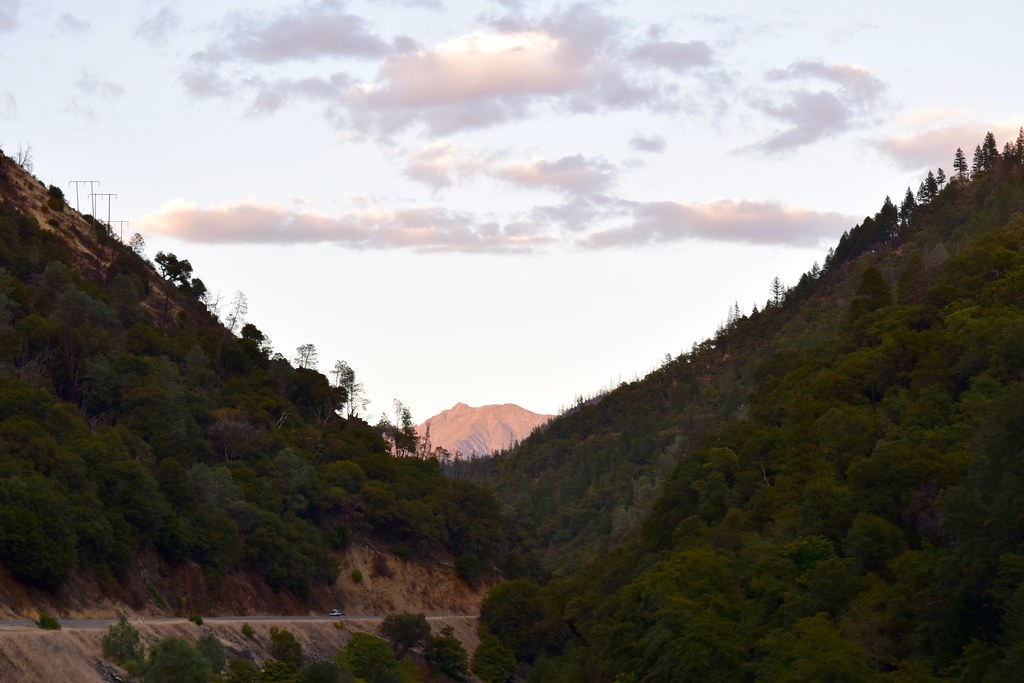 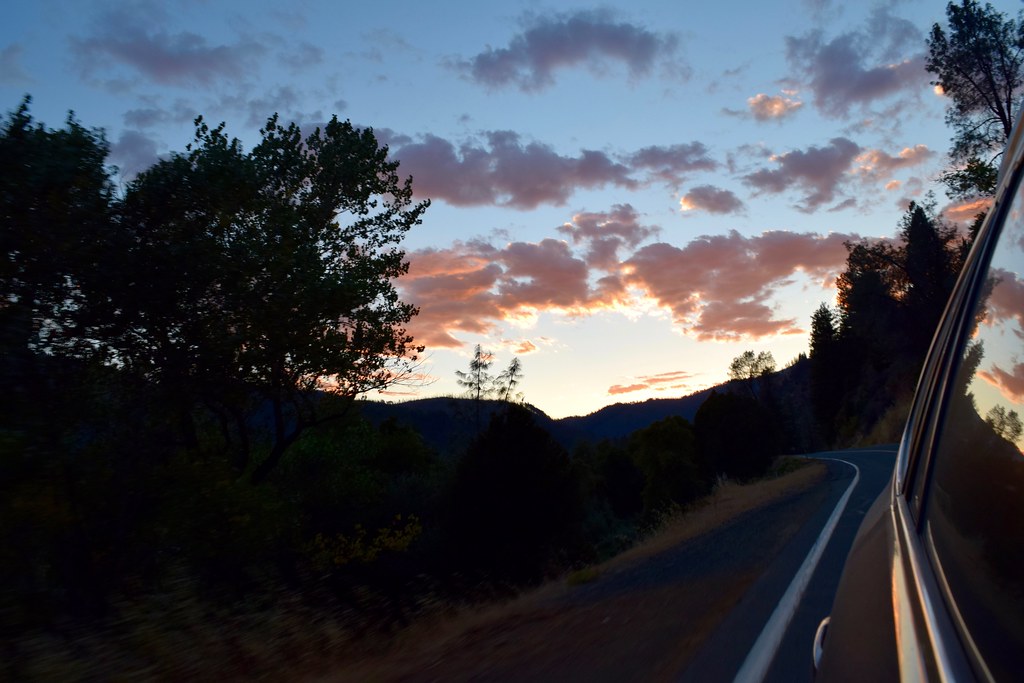 Don’t get me wrong, it was beautiful, but it was getting dark and I hadn’t found anyplace to have dinner and I was just ready to be done for the day. I managed to make it through the day without taking any pain pills, so I could help drive, but my tooth still isn’t healed and I was ready to rest.

In spite of that, though, Redwoods was a pretty amazing experience. I definitely want to come back again when we have more time. The pictures can’t do it justice. 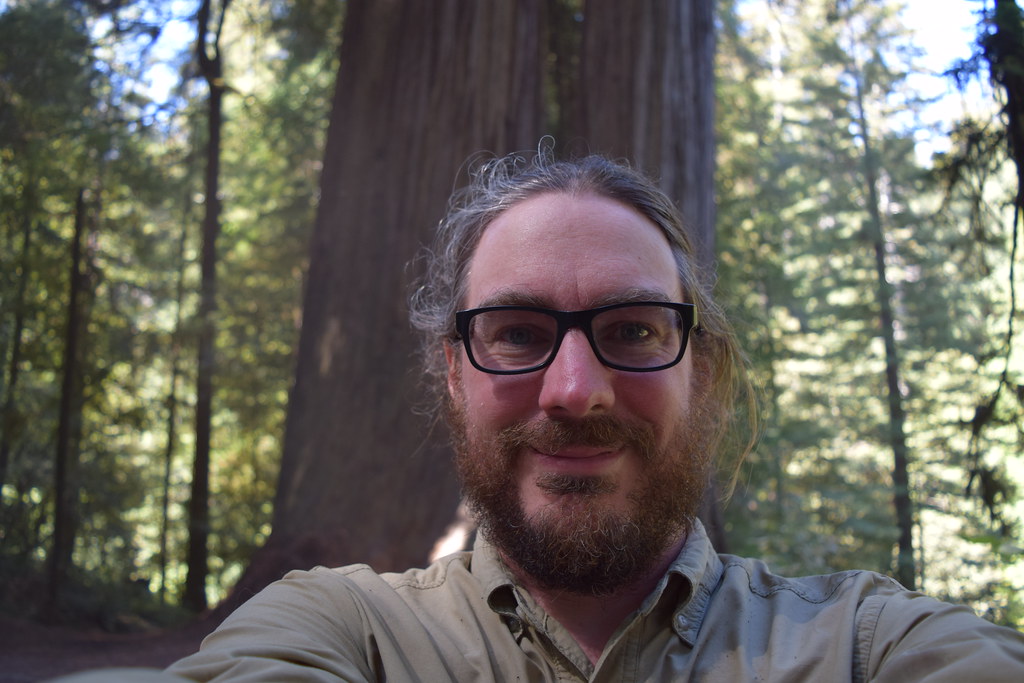 (We have far too many pics to include here, so check out our Flickr photostream for more shots that didn’t make the blog.)