(Kay)
As per usual, Lita informs us that it’s time to get up and go for a walk. While I’m taking care of that Dachary starts researching the place she has an appt. with. We booked it from the road thinking that any place that prominently advertises itself as dealing with emergency dentistry, even on the weekends, can handle all the standard things that go wrong in one’s mouth, including wisdom teeth. This turned out to not be the case.

Dachary goes in, they take one look at it and say “Yup. It’s the wisdom tooth.” but the thing’s too inflamed for them to go trying to pull it. They send Dachary off with a prescription for Hydrocodone for the pain, Penicillin for the infection, and a mouthwash to kill off things.

She’s been having trouble swallowing and the doctor tries very hard to convince her of the importance of getting to an emergency room immediately if her throat starts to swell shut any more than it already has. Dachary informed her that she was a certified first responder who understood the importance of airway management and the doctor promptly relaxed. Yay training.

She gets back, & we eat some soft eggs whilst waiting for the pharmacy up the street to open. The toast was harder to chew than anticipated.

The pharmacist informs us, indirectly, that the rest of the day will be spent on a long quest for soft foods at carefully planned intervals. The Penicillin needs to be taken on an empty stomach, the Hydrocodone on a full. There needs to be at least 1.5 hrs after the former before taking the latter.

I drive. Well… I would. She’s about to be high on opiates and not fit to operate heavy machinery.

We grab a ride on the ferry to cross the sound instead of driving around it, and drive through a lot of suburb(ish) land that eventually brings us to Port Angeles and the New Day Eatery, whose internet site has promised a soup of the day.

We arrive, get out of the car (after first turning on the bark machines), and proceed across the street. They’ve sold out of the soup of the day, but they helpfully point out that they make smoothies. Dachary chooses a somewhat horrible sounding one based on the fact that it is the one with the most nutritional value. It’s not on their website but it had peas… PEAS.

It was pretty damn tasty. My gyro was too.

We head up the road to Hurricane Ridge because the National Parks book told us we had to. As we approach there’s a roof of clouds above us and I’m convinced we’ll get to the top, and have a glorious view of the inside of a cloud. 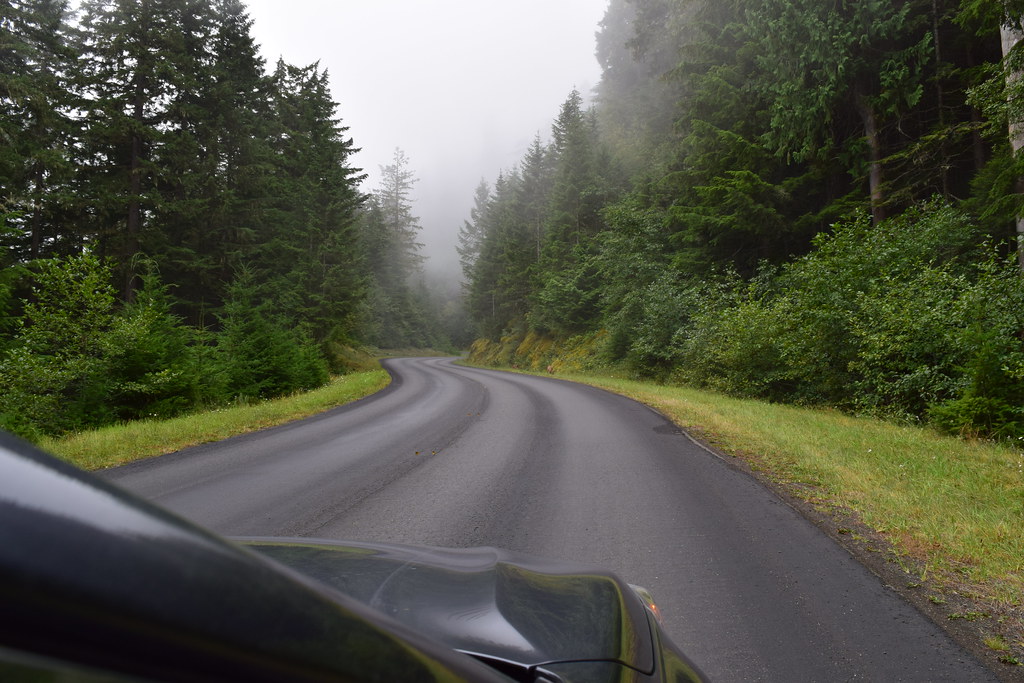 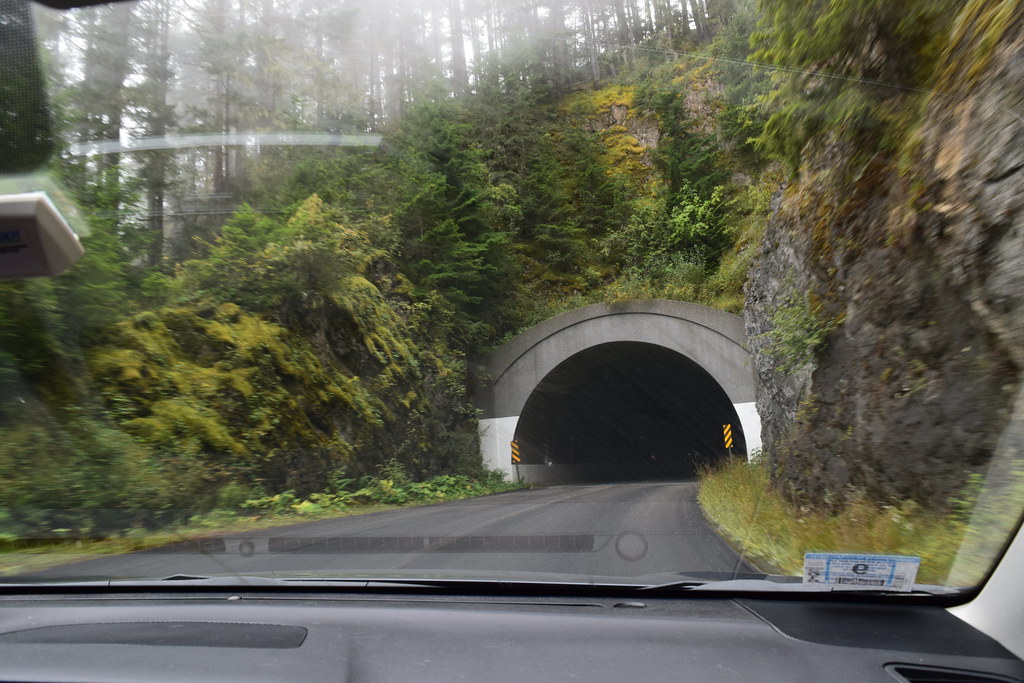 But eventually, we break through, and look back on what we just drove through.

The view at the top was worth every moment. Pictures just don’t do it justice. 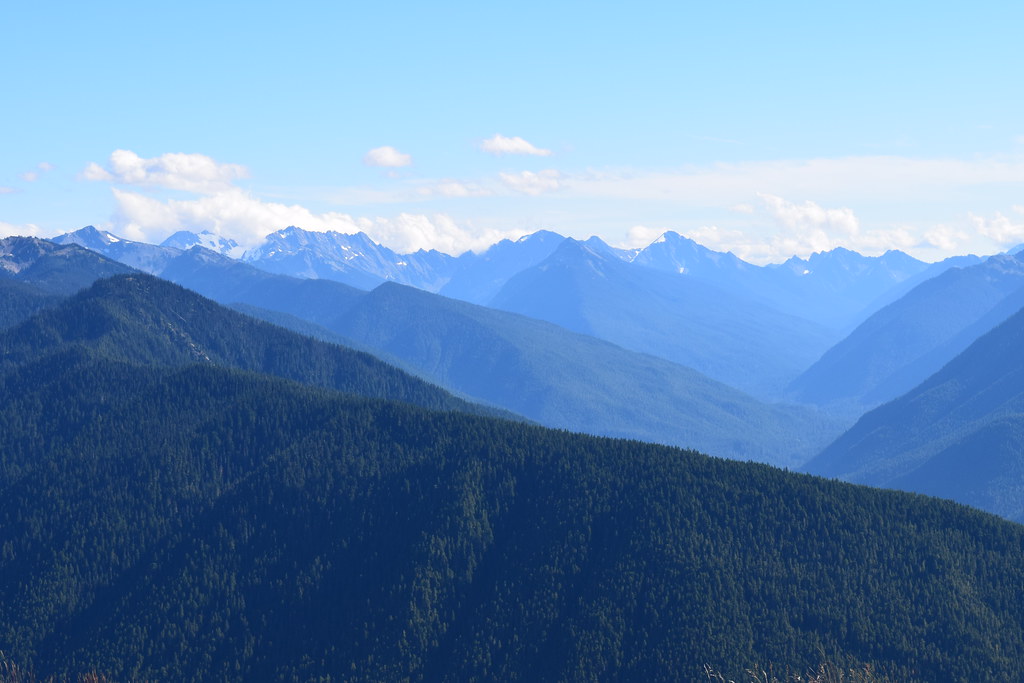 By the time we get there though, the drugs have started to wear off and this is the best “smile for the camera” Dachary can manage 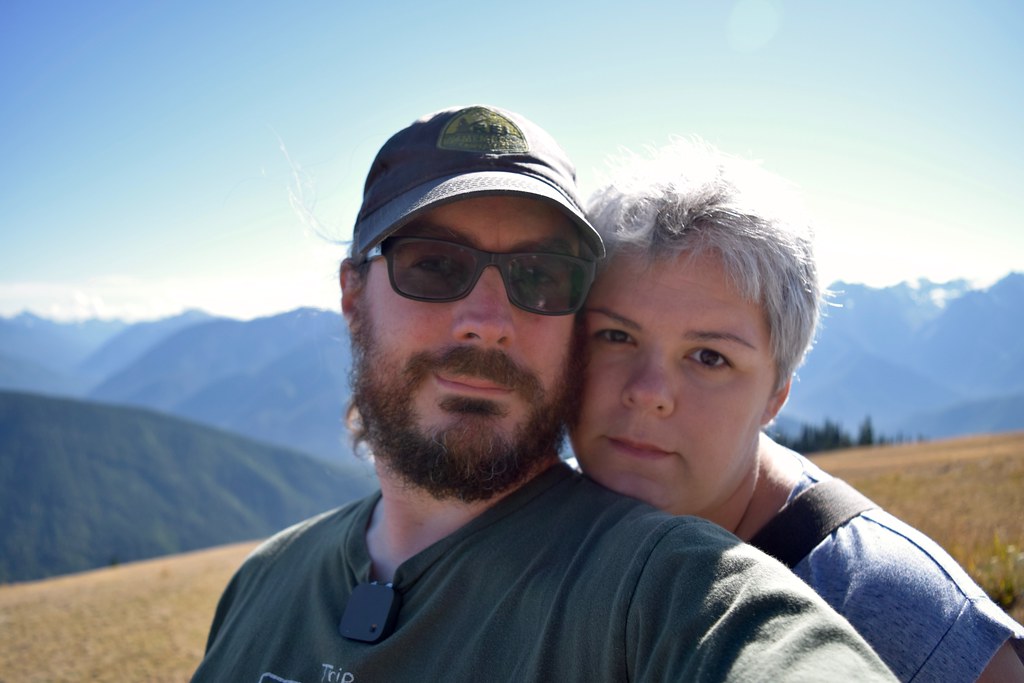 Also. She has to pee. She’s been consuming fluids, or soft foods made mostly of water all morning, and it’s starting to have an effect. She pees like 4 billion times. Mostly fluid diet plus road trip along the side of a mountain is not a great combination.

It should be noted that in the parking lot, we find a group of minis that have done what mini drivers do: get together at the top of tall mountains. I don’t know why this is a thing. They do it on Mt. Washington in NH too. 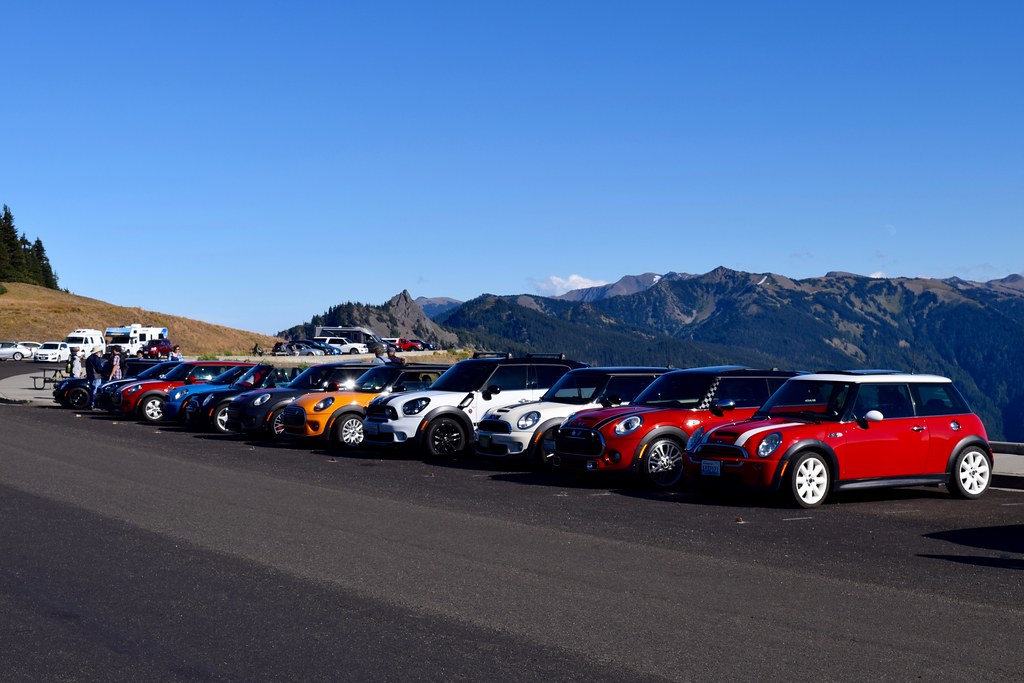 We look around, up there and pee a few more times. I’m not sure how this is humanly possible, and my body apparently doesn’t want her to feel bad so it tries to pee all the pee too.

Then back down through the clouds 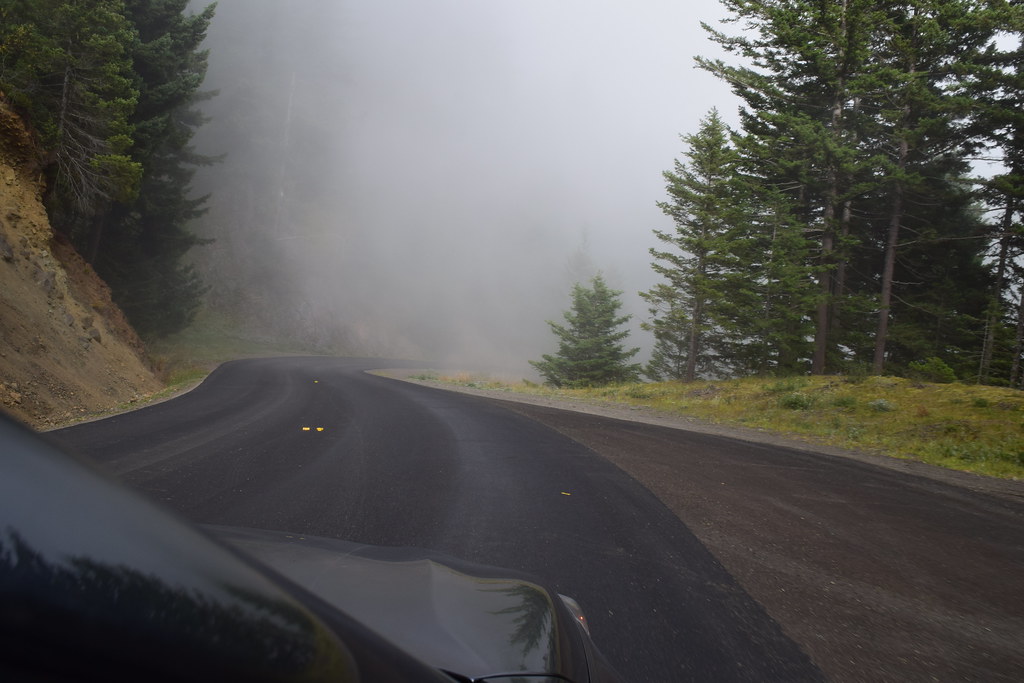 and the stupid people who can’t follow instructions on the many signs telling people to leave the wildlife alone. For their safety and yours. Seriously people. Argh. 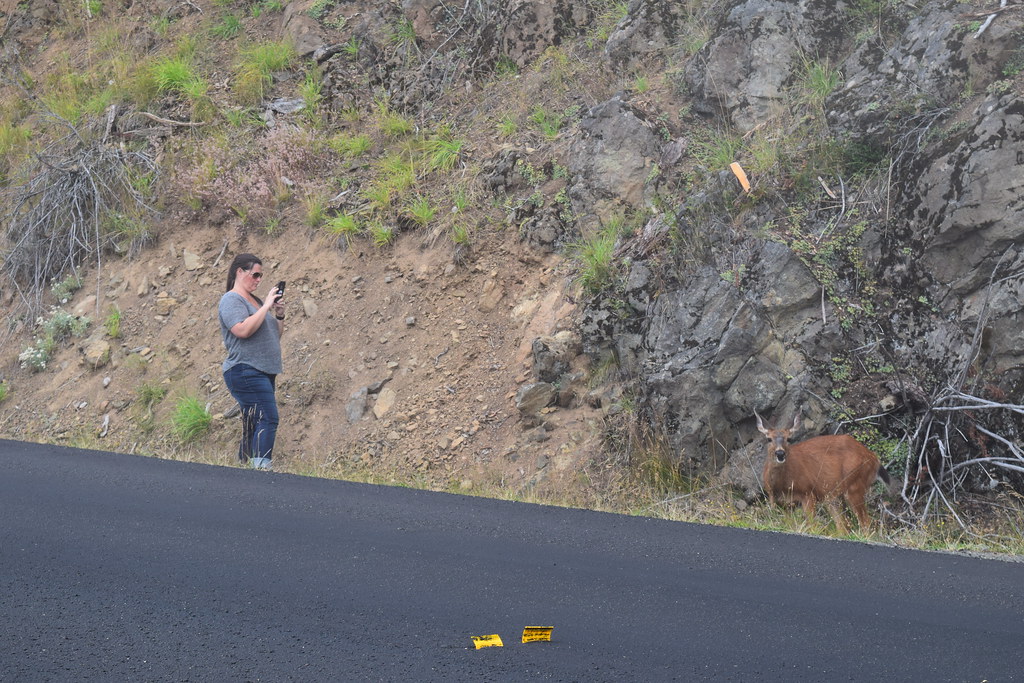 Time has passed, as it does, and there’s no way we’ll make it around the west side before dark. It’s after 5 PM and Dachary needs to eat again, because the pain is getting bad again. We start trying to plan the rest of the day. Where to eat? Where to sleep? What does that mean for driving. Dachary really wants to see the rain forest. I do too but I’m unsure if we’ll actually be able to since you can’t take dogs on any of the trails.

We decide to book a room at the only place in Port Angeles. It’s 3 star hotel (expensive) with reviews a slum-lord’s motel would be ashamed of. Never-mind. We head south for Tumwater. Dachary’s brain can’t handle the pain and planning and finding food and and and…. she finds a Denny’s somehow. We’ll go there. Eggs are soft. Mashed potatoes are soft. I try to find something close but she’s not up to it. “Just drive.”

The food was soft.

The hotel has grass for the dogs.