We snuck out of the house without incident. Well, mostly. Jeff’s dog started barking when it realized we were all going outside without it.

At the end of the road we plotted our route, and set off for Glacier National Park’s west entrance. As has proven to be the way of Montana the sky was frequently spitting rain at us the whole way.

It started off pretty well. 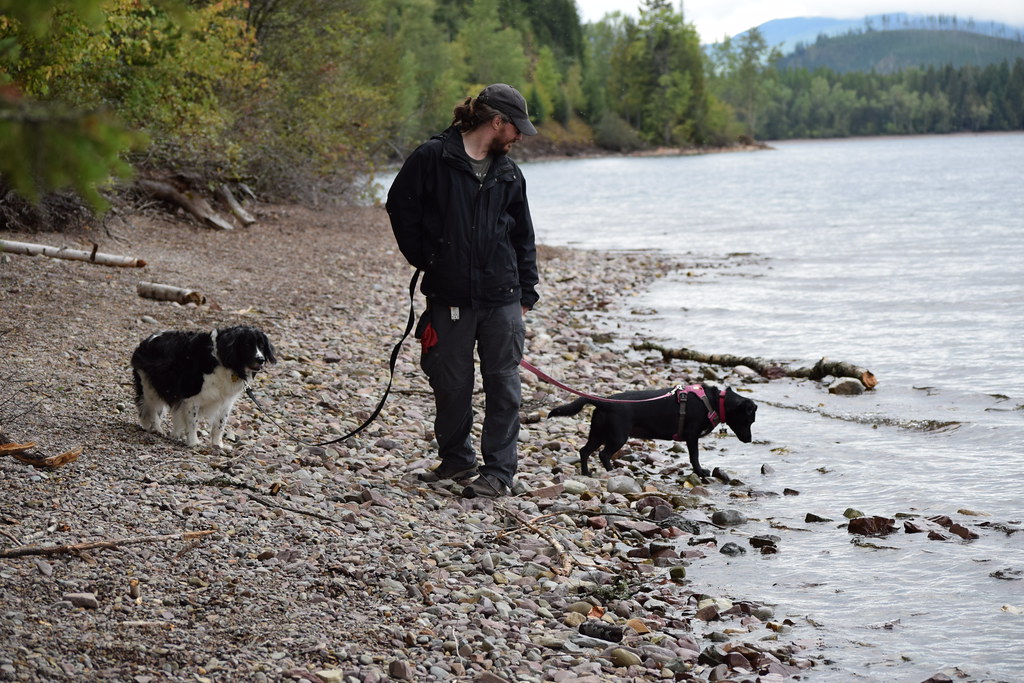 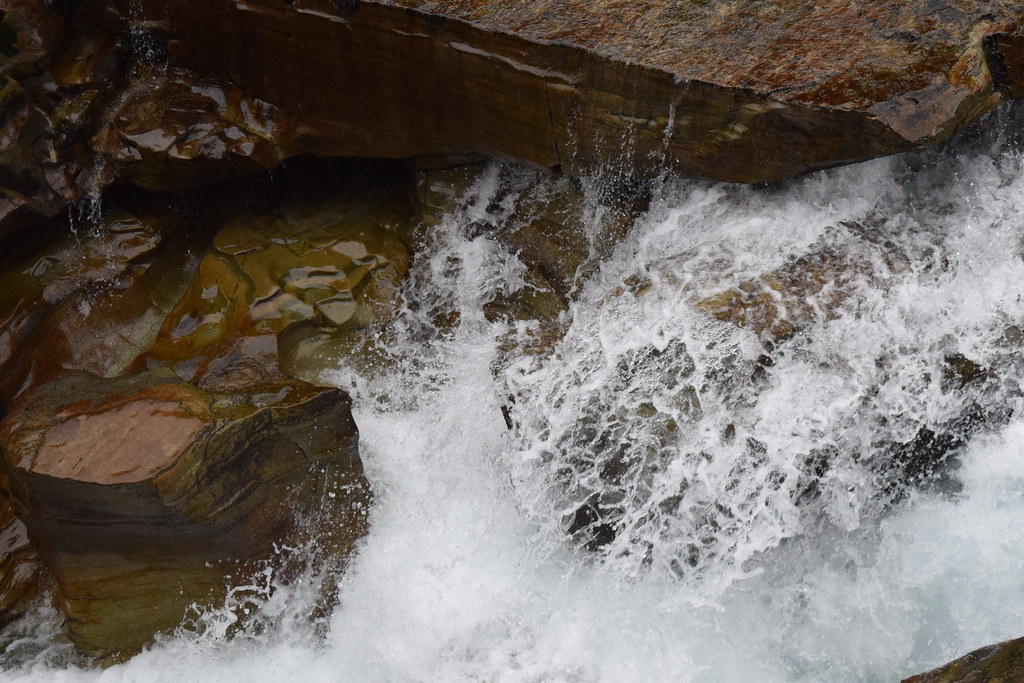 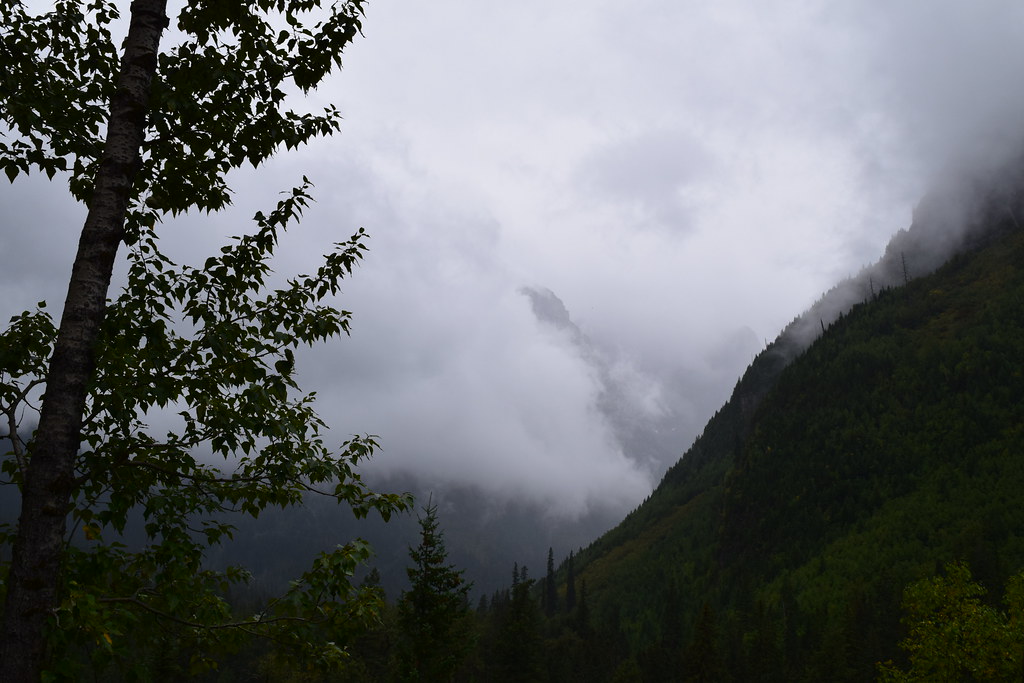 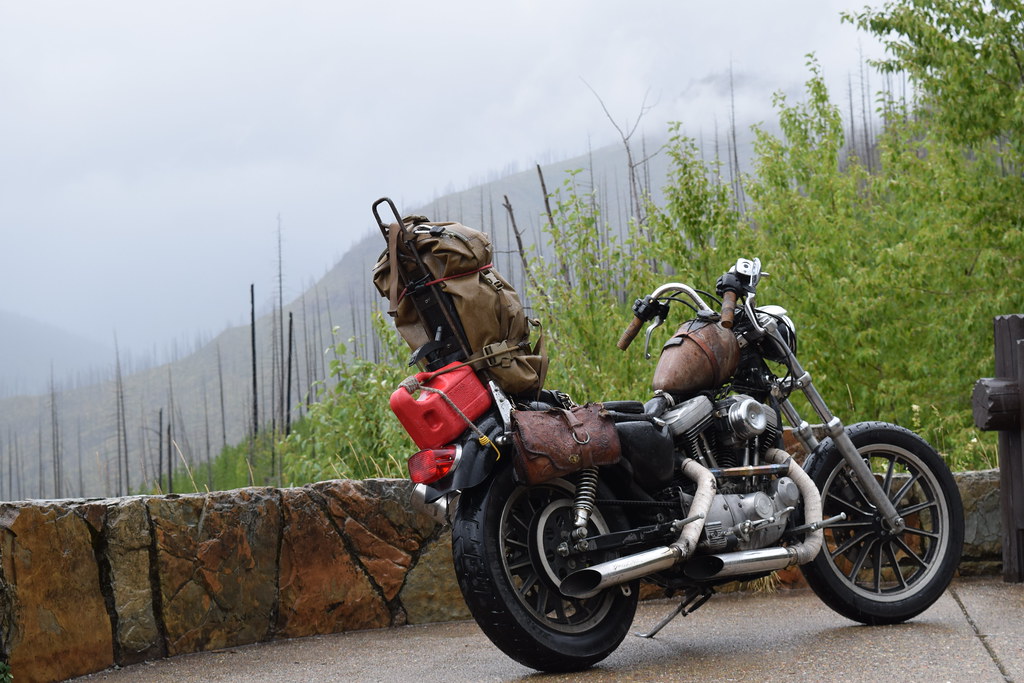 We kept going up, and the clouds kept staying at the same elevation. 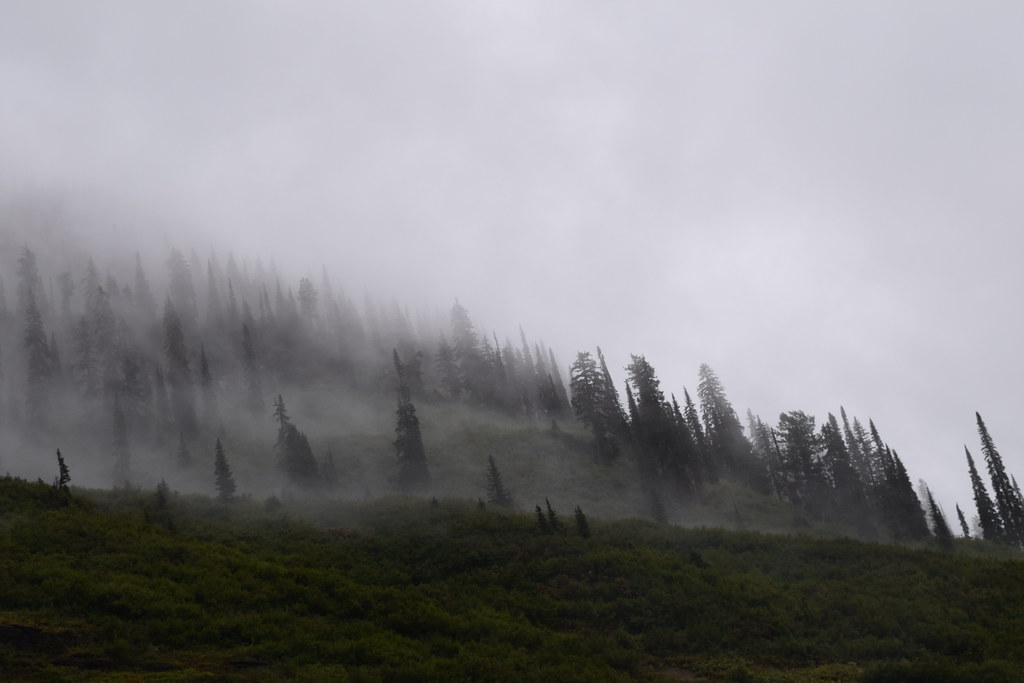 Soon this would prove to be problematic, but first, there was a traffic jam owing to road construction, only one travel lane, and an excessively full bladder. 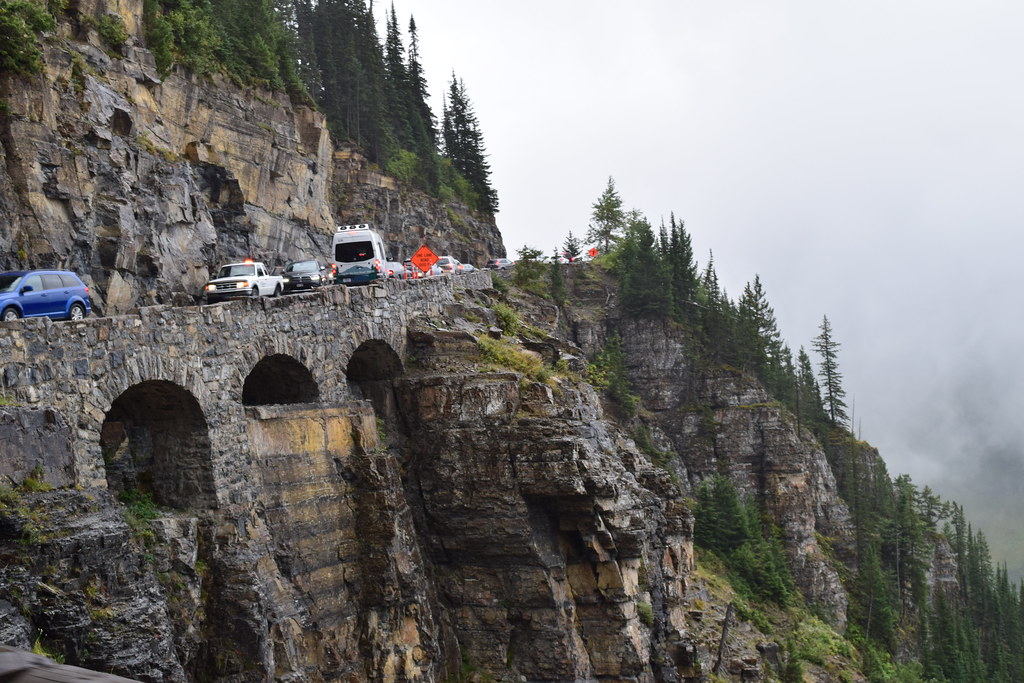 Emergency measures were considered. To the left were rock cliffs. To the right a perilously vertical drop-off. Being seen by folks as you peed in a bush was not the problem. Dachary was faced with the question of wetting the driver’s seat, or falling off a cliff. But then, as we passed between construction cones, the gods decided to favor her. The construction workers had a porta-potty. She pulled out of the lane into the coned-off area behind a construction vehicle, turned on the flashers, and made a mad dash for the holy vestibule at the first available break in traffic.

I got this picture of some grass. 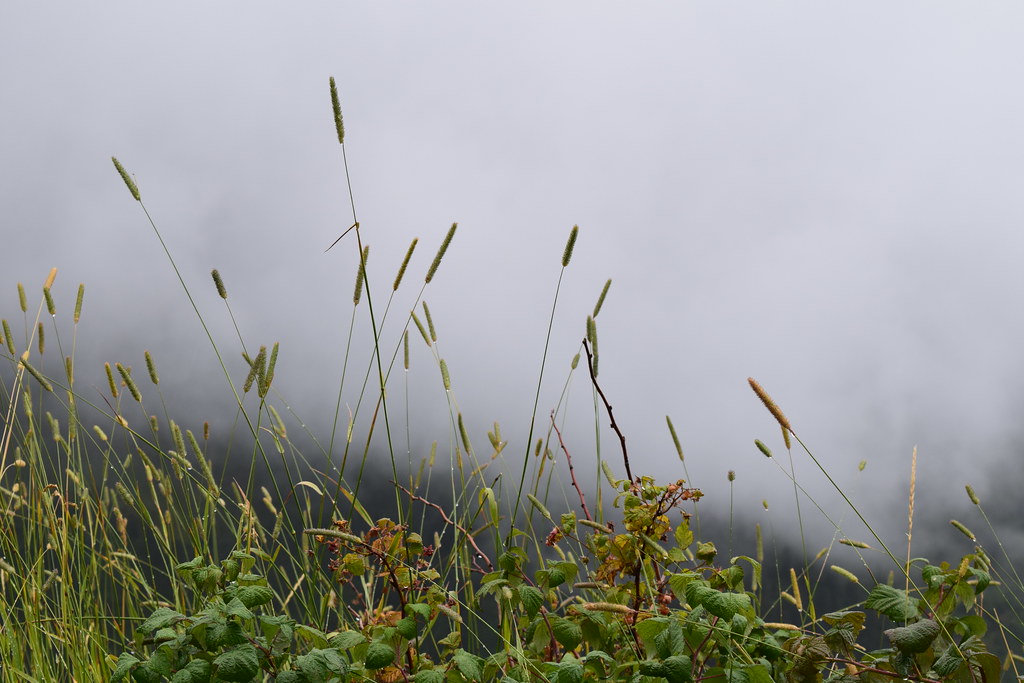 A construction worker chuckled at her emergence and suggested she “Just leave a quarter on the top.”

A greatly relieved (get it? relieved?) Dachary returned to the car, and undertook her next challenge: not sending us plummeting to our deaths while the world looked like this. 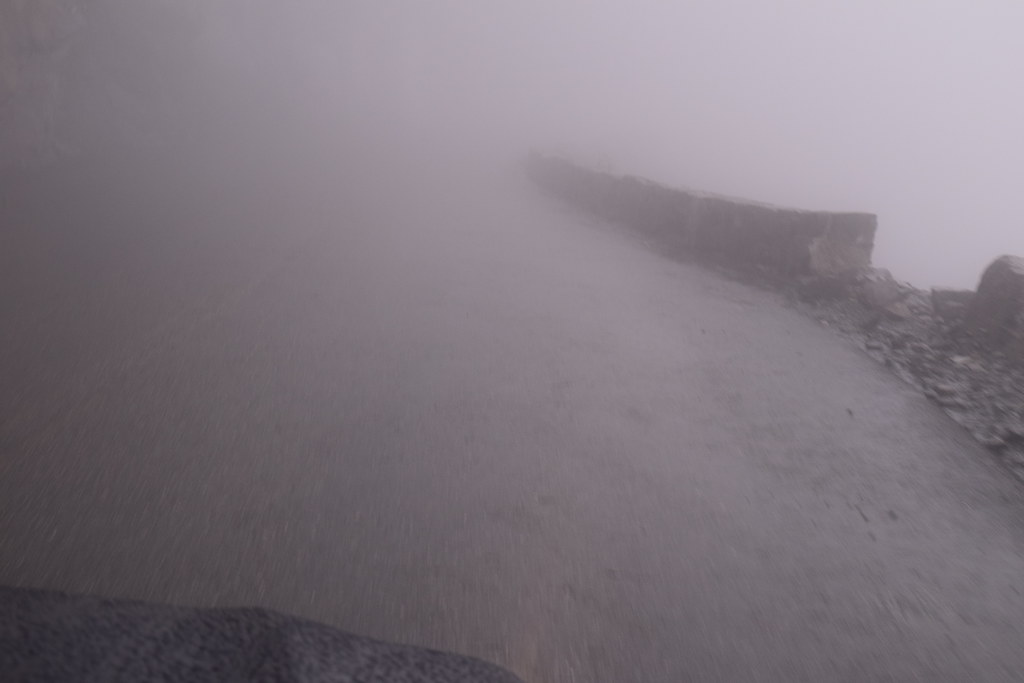 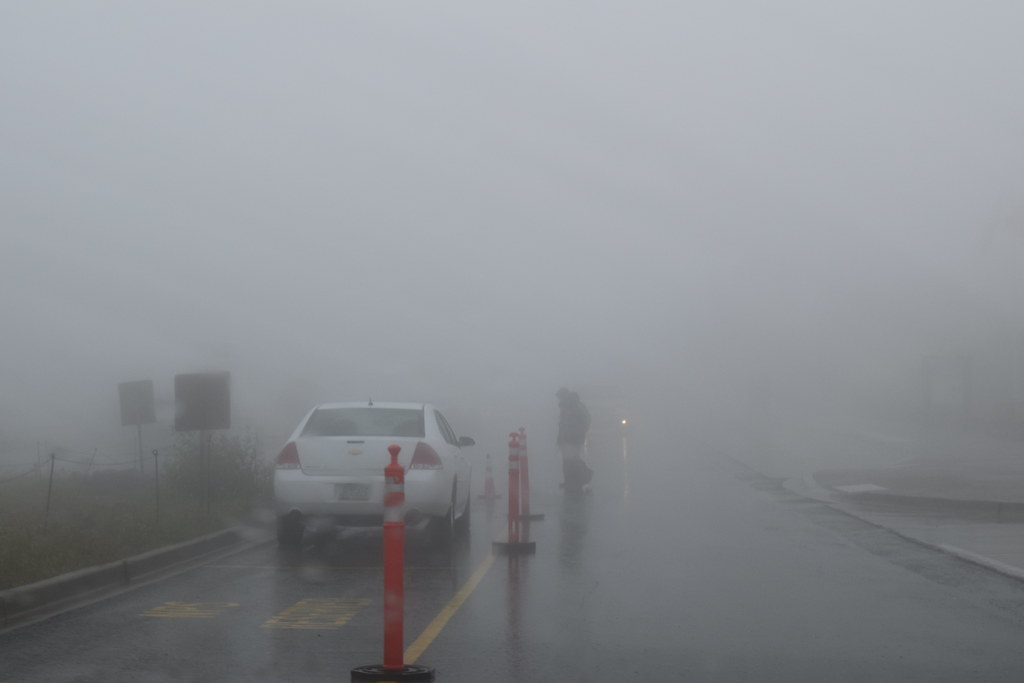 Almost immediately after leaving, the world changed into this: 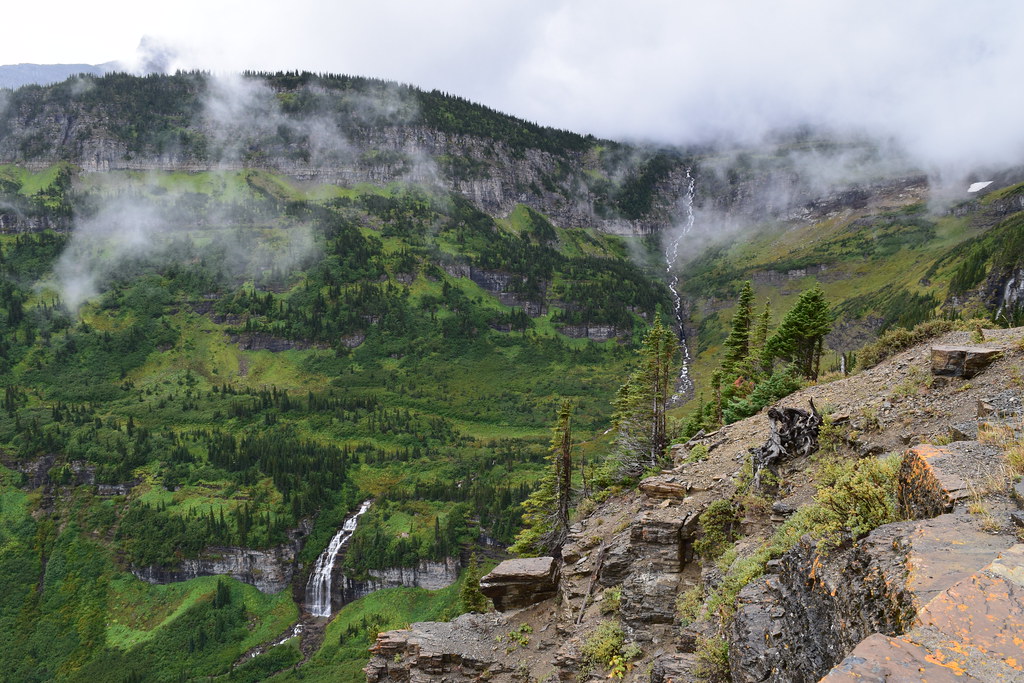 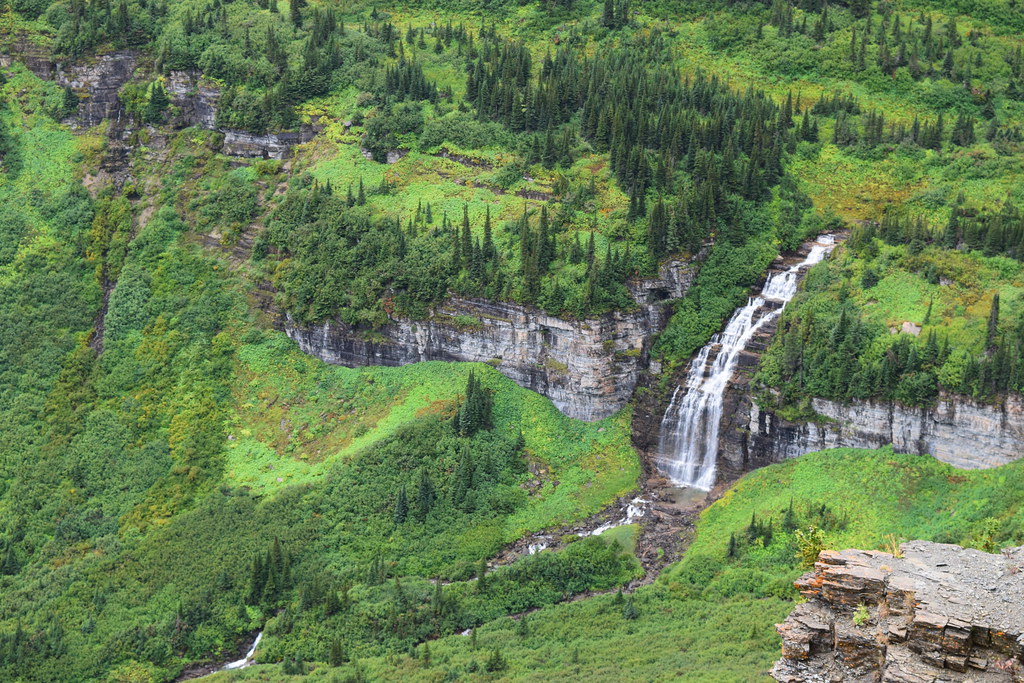 We were… a bit surprised. 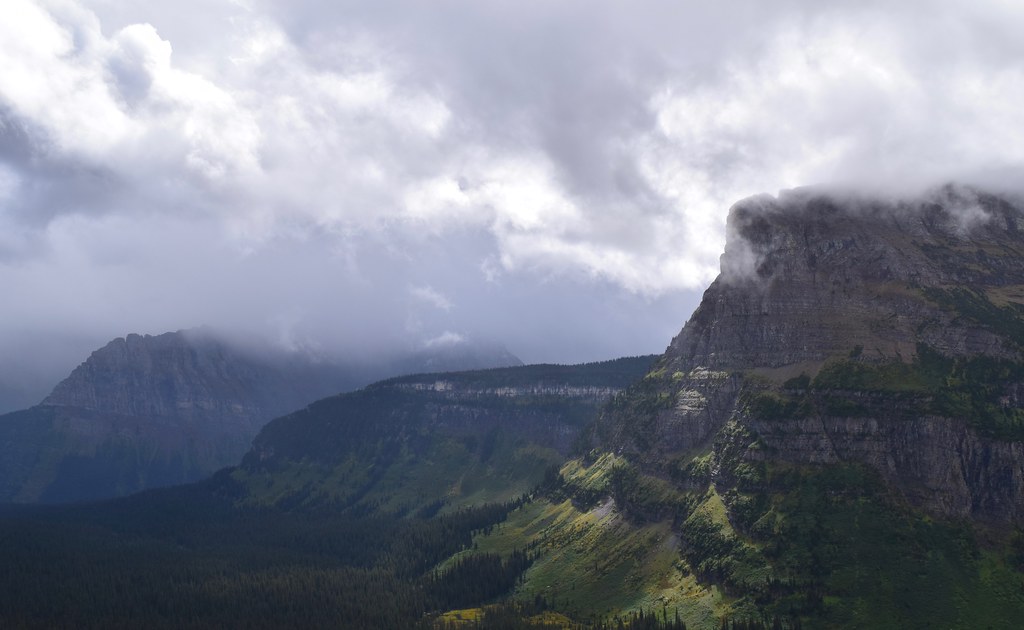 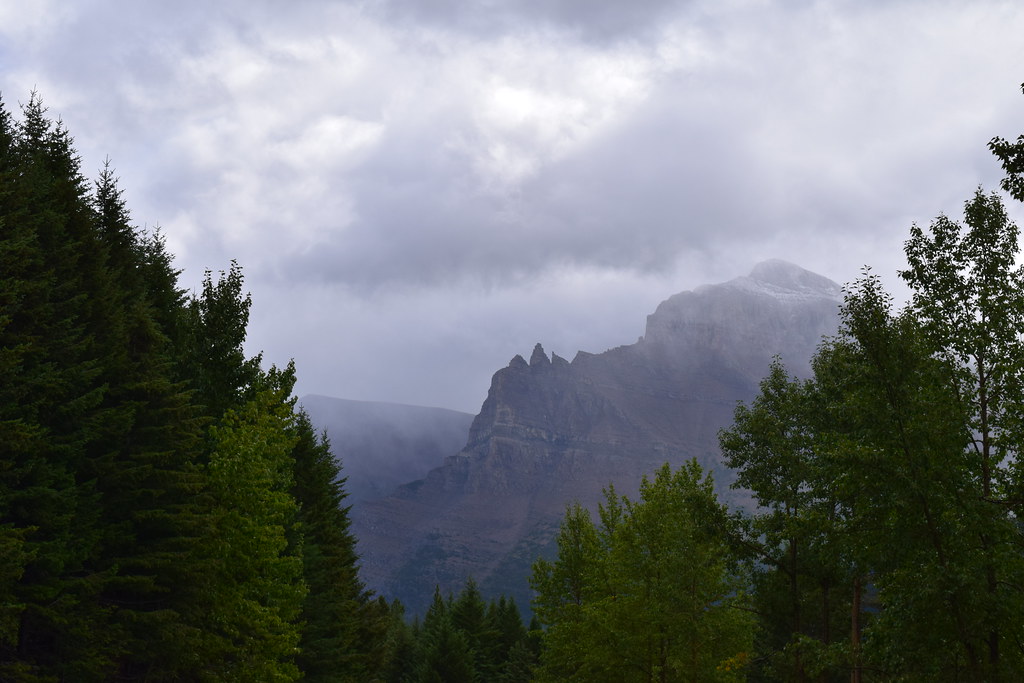 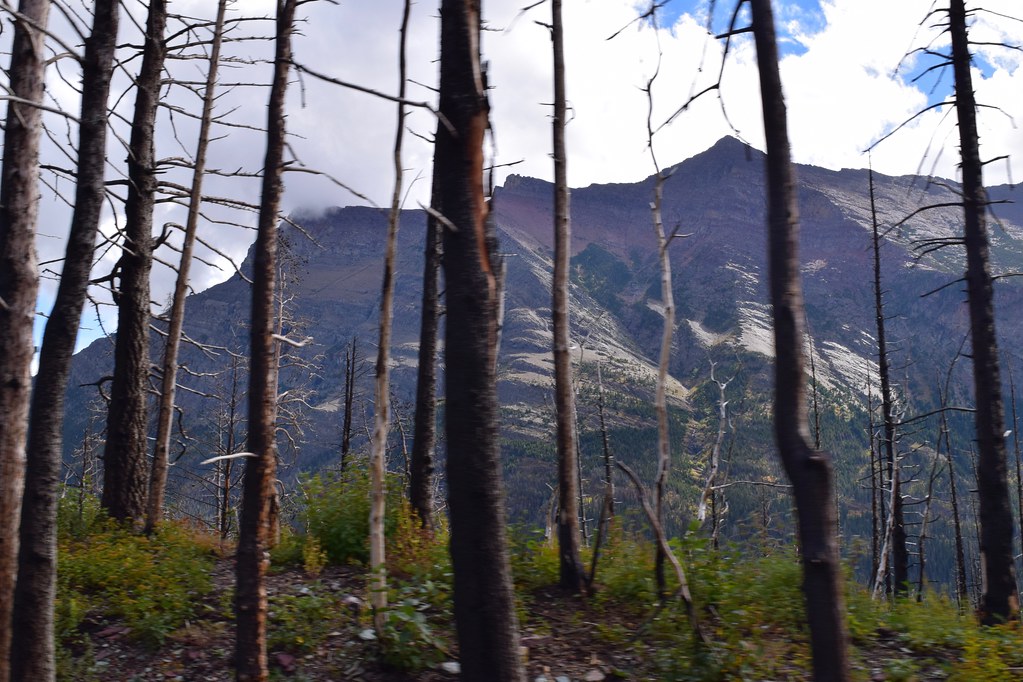 In the end, we were all smiles. 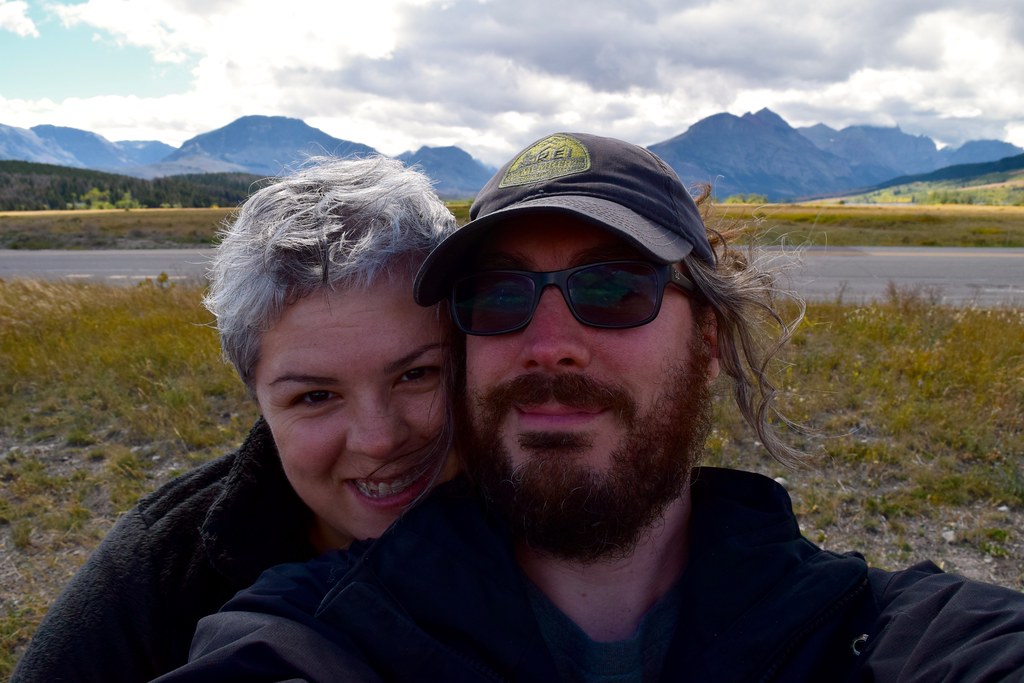 The trip from the eastern park entrance, back down to road that cuts along the bottom proved to be one of the best motorcycling roads we’ve seen in the U.S.. Curvey, tight, and filled with great views. 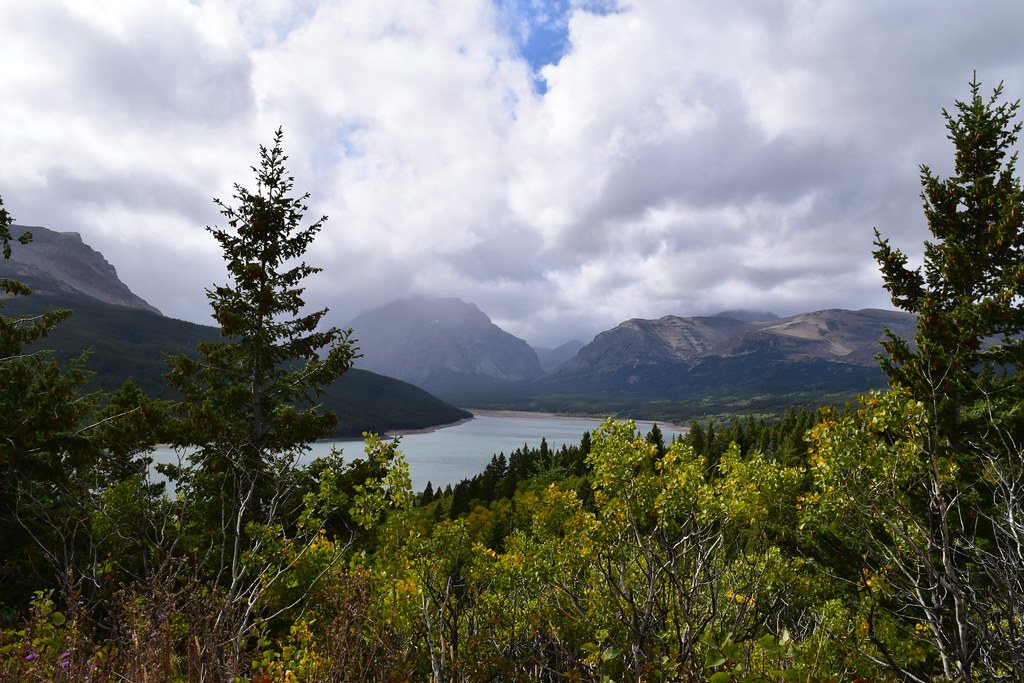 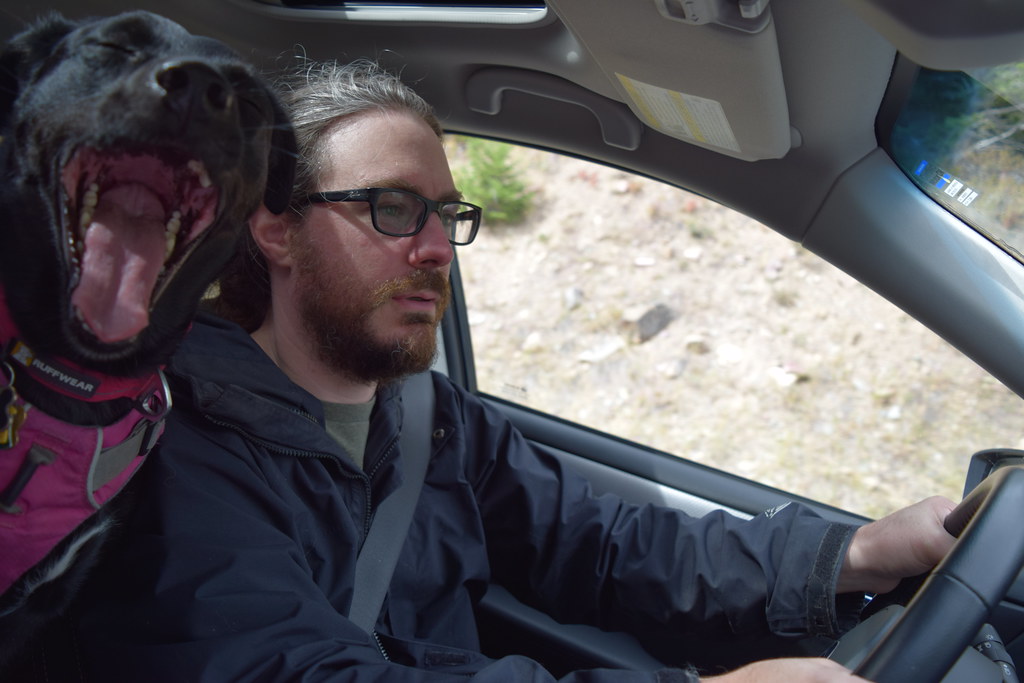 Heading back around the bottom of the park was actually a little disappointing. It wasn’t bad, it just couldn’t compare to the park’s interior.

Upon reaching our hotel we started uploading photos and began a search for steak, which took far too long, but provided tasty results before we passed out.

P.S. As always, there are way more photos in our Flickr account. There’s just so much beautiful in this park.