Waking up in Butte and starting my workout was more difficult than it had been since we set out on the trip. I can’t decide if it’s because I’m getting out of the habit (or just tired) – or if it’s because I’m not at sea level, and maybe I’m not very good at being at altitude. When we went into Bolivia a few years ago, I had major altitude issues, so I may just be one of those people who needs time to acclimatize to being above sea level.

After getting through my tough workout (yay me! Yay commitment!) we loaded into the car and headed toward Missoula. It was a little after 9am, which means we’re getting later – I think we’re slowly adjusting out of East Coast time. I really liked being up early and on the road, so that makes me a little sad.

Got into Missoula a little after 11am, and found the Subaru dealer pretty easily. They were super good about getting us in for our 12k service even with only a day’s notice. It turns out, there was also an open recall on the car, so they were going to do that at the same time. Yay! We filled out the paperwork, and I walked the dogs around the dealer while Kay made use of the facilities. When I was about three quarters of a way around the parking lot, a red truck pulls up along side of us, and it was my cousin Jeff! Yay! I hadn’t seen him in ages, but we’d been connected on Facebook, so we were able to get ahold of him to meet up while we were in town.

We chatted briefly about plans for the day, and Jeff suggested that we set things up with the dealer so we wouldn’t have to be back at any particular time and could pick the car up after hours. I went back in to do that – shout out to Subaru of Missoula for being so flexible and awesome – and when I came back out, Kay, dogs and I piled into Jeff’s truck and off we went!

Turns out, Jeff has a couple of favorite spots to take people when they visit Missoula, so we headed off in the direction of Garnet Ghost Town. While we chatted, though, it became apparent to Jeff that Kay and I had at least a passing interest in the trees and learning more about his former career, so we took a little side trip to the Missoula School of Forestry ‘experimental forest’ – where the forestry students learn about trees, practice active management, etc. We got a crash course in forestry, active management, fires and logging practices, and it was awesome. I now know that Lodgepole Pines are a pioneer species, and Douglas Fir trees aren’t actually fir at all, and some quick, easy ways to tell the age of a pine, and some bits about how to tell a healthy forest from one that isn’t doing as well, and how to recognize various things about fires that have swept through, etc.

I can’t say enough about how much I enjoyed it. Kay and I are happy enough to wander around the world and see things on our own, but having a knowledgeable, thoughtful person guiding you around and giving you all this background on a place and things you’re looking at creates an entirely different experience – so much richer. Kinda makes me want to take more guided ranger tours and stuff.

We also checked out some logging roads, and Jeff explained more to us about the equipment, various practices here in the Montana area, and how the industry differs in other places, like California, etc. It was really cool to gain insight into an industry that can be villainized by environmental groups – it’s not something I really knew much about, but I really enjoyed learning. As usual, the truth would appear to be much more complicated than the simple black-and-white sound bytes that self-interested groups would espouse.

Also? Some of the views from the logging roads were pretty damn nifty. I enjoyed the heck out of this experience.

We also headed up toward a fire lookout tower that offered some very nice views, before heading down to the ghost town proper. 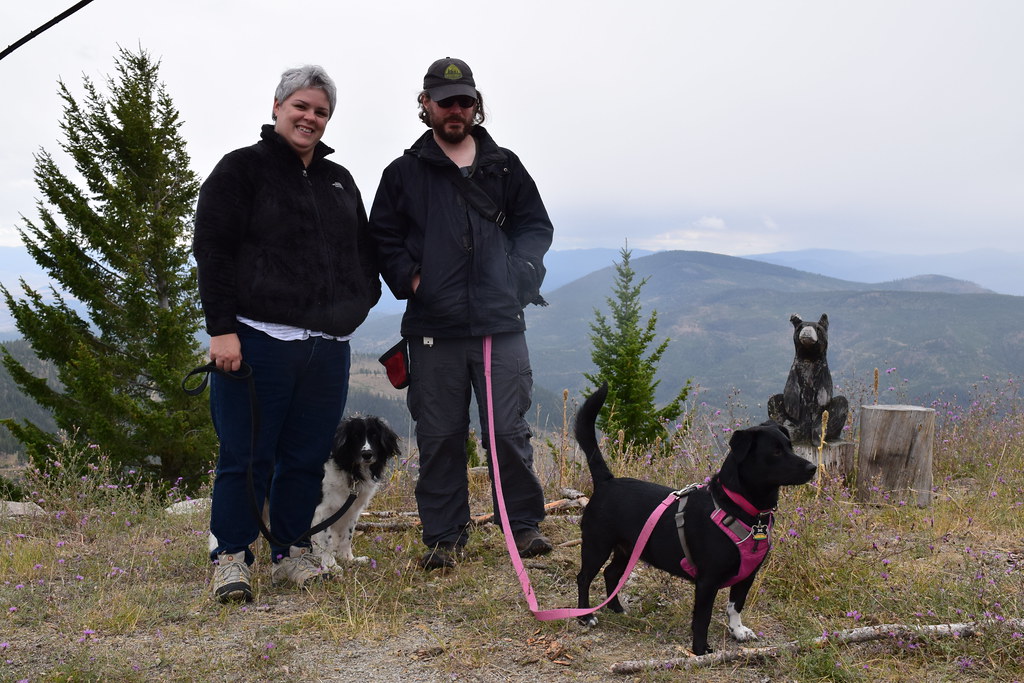 Garnet Ghost Town is an old mining town that the Bureau of Land Management is maintaining in a state of ‘arrested decay.’ They’re trying to keep the buildings from collapsing any further, but they’re not bringing in any buildings from outside, or “fixing up” any buildings beyond basic maintenance to keep them standing. As a result, it doesn’t have the touristy feel of an actively maintained ‘ghost town’ – and it’s also not as abandoned-feeling and desolate as some of the decaying ghost towns we’ve visited. It was a cool little experience. 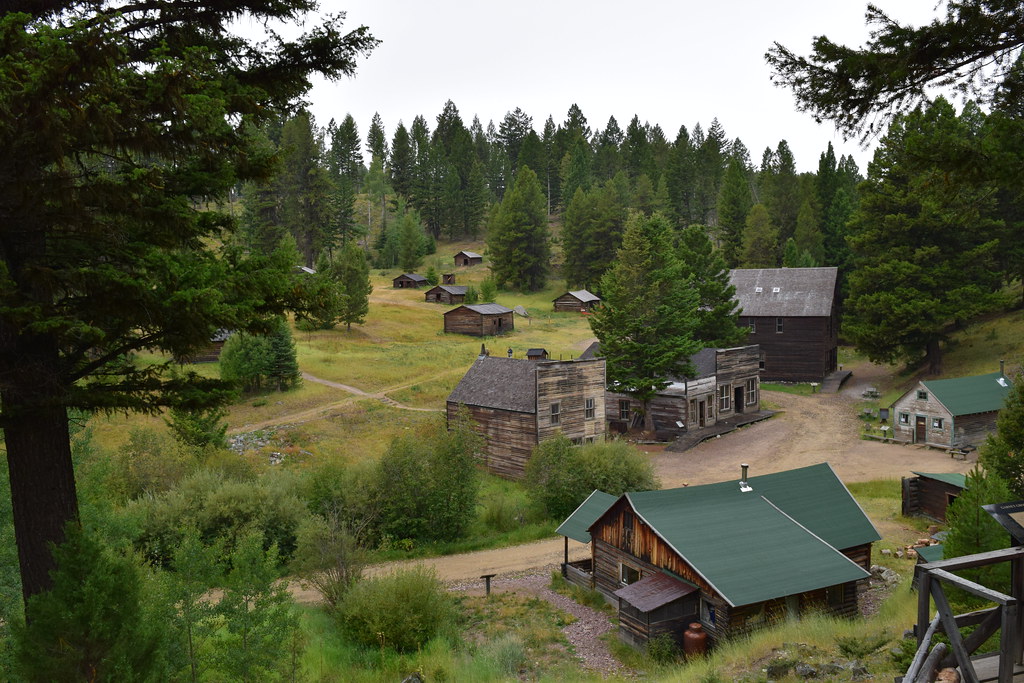 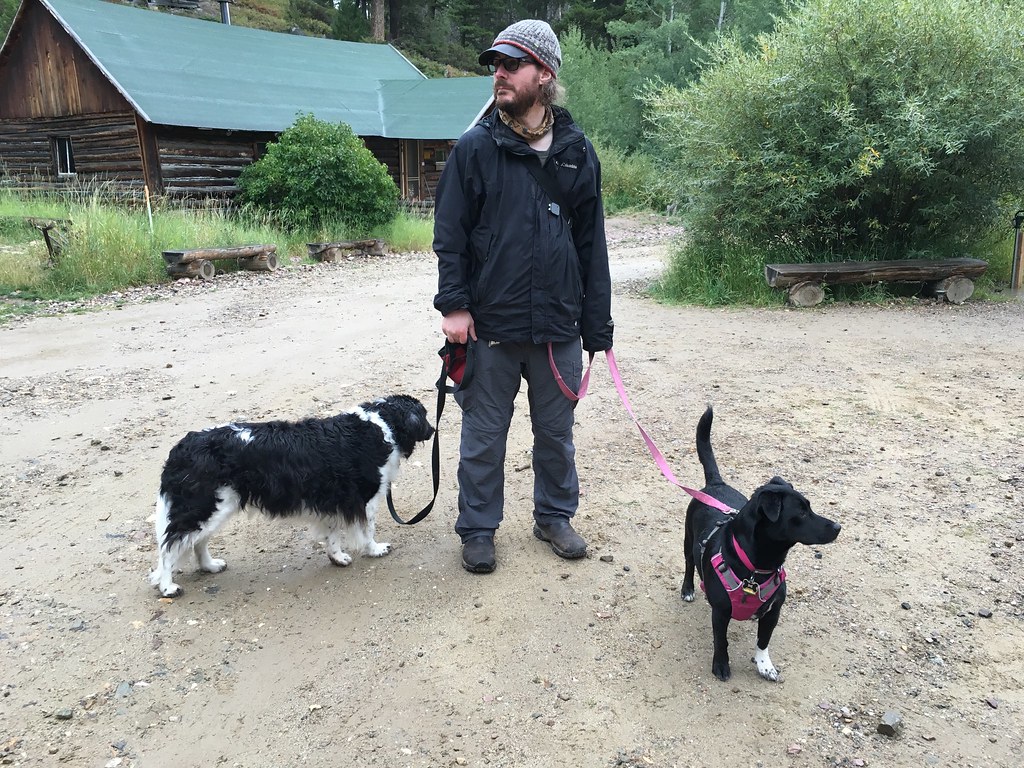 Alas, during our time in the ghost town, the rain we’d been flirting with as the afternoon wore on decided to set in in earnest. We enjoyed being out of the car, so we didn’t mind so much, but the dogs got wet and tired, and they passed out as we drove back to Missoula. 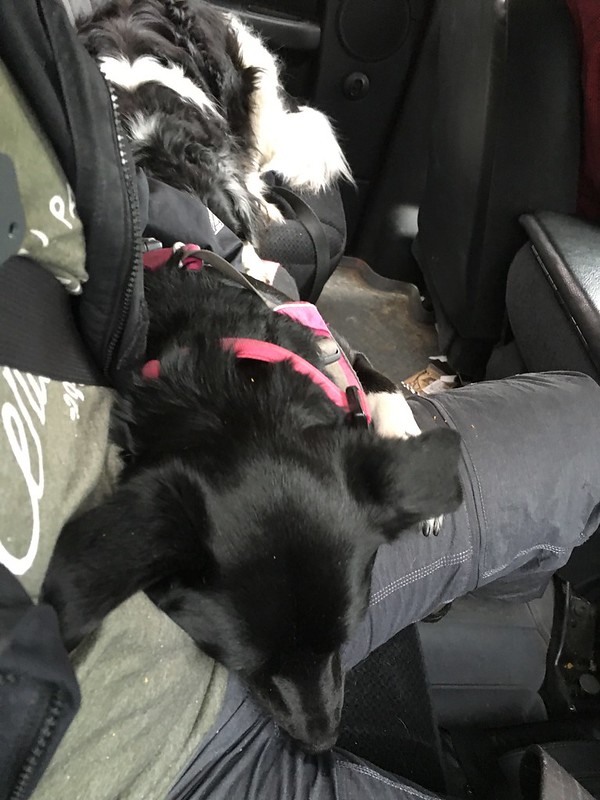 When we got back to town, we went by the Subaru dealer to pick up our car, and then we met Jeff at his place, where we enjoyed dinner, and Lita made a new BFF in Jeff’s grand-dog, Hallie. They played. And played. And played some more.

And, alas, excited Lita had an ‘incident.’ When we retired for the night, she jumped up on the bed… and then started peeing. ACK! We stopped her, yanked the comforter off and got it out of the duvet cover… but the comforter and duvet cover had been too effectively doused. They required laundering. I felt awful that we were repaying Jeff’s generously hosting us with our dog peeing on the bedclothes, but he was super nice about it. We got the comforter into the laundry, and hopefully it recovered just fine.

This is a weird edge case when traveling with the dogs. When Lita plays a lot and gets *really* excited, sometimes she forgets her potty training and looks for the nearest absorbent thing to pee upon. The one other time this has happened when traveling, we were playing with her in a hotel room and got her all riled up, and she peed on the dog bed that we bring into the room with us. We were able to get it out before any pee got on the hotel floor, and we took it to a laundromat to wash it, so in the end, we only lost a little time at the laundromat – but it’s a kinda annoying thing, made more embarrassing when hosted by generous family than when paying for an anonymous room for a night.

After chatting about possible routing for our trip to Glacier National Park, and the big-picture routing of the various parks we want to visit and our time considerations – and Lita’s incident – it was 11:30pm before we got to sleep. That’s 1:30am Boston time, which we’re still mostly on. I fear this late bed time will mess with our desire to get an early start, and to maintain East Coast time while we’re out West.