It started with sun, actual, honest to goodness sun. Not, overcast with sun peeking out, but sun, with an occasional cloud.

If we have learned anything from our time in Nova Scotia is that their weather forecasting is even worse than ours.

After packing up the smelliest hotel room ever (excessively moist boots and tent) we left the door open and the fan on, in hopes that it would have a chance to air out before the cleaning lady got there and passed out from the stench, then let the dogs jump into their sidecar and set out. I’m still wearing trash bags in my boots, because apparently 36 hours isn’t long enough to dry them once they’ve reached total saturation, unless you’re in a much drier climate, or do the newspaper trick, which someone on ADV Rider mentioned, and I’d totally forgotten about.

We decided to do most of the Bras D’or Lakes scenic route, which looked spectacular on the map, and started out with some pretty views… 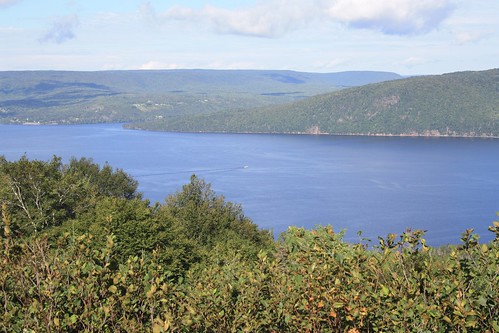 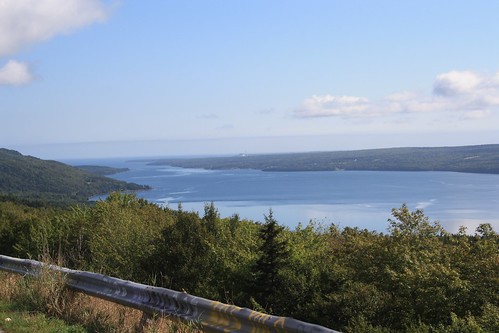 … but after crossing the bridge… 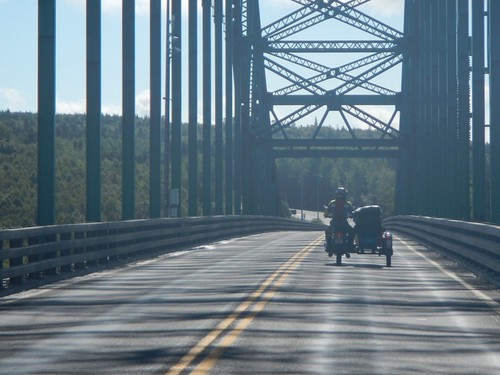 turned into a long stretch of bumpy, poorly maintained roads, with almost no view of the lakes. If you ignored the typical North American houses it could have been any back road at this latitude. 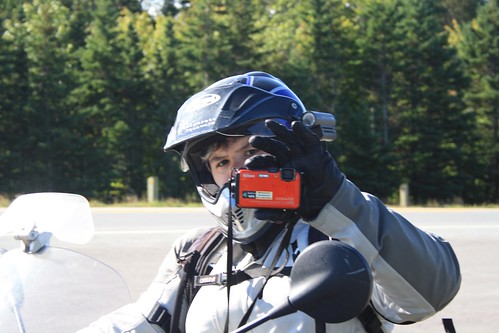 This isn't to say they weren't trying to improve the roads. We spent a goodly amount of time like this… 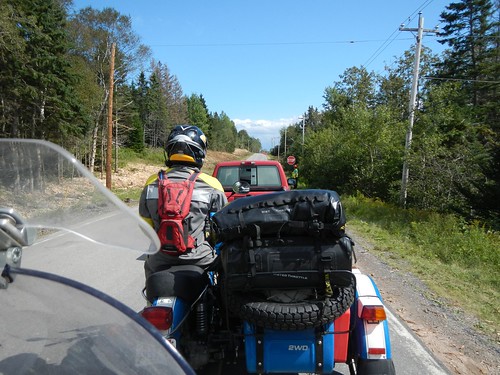 Because Nova Scotia construction crews like to close down one direction of traffic and do work on big sections of road instead of doing wee patches like we do in the US.
It was nice though: sunny, warm… We opened up our vents, and generally enjoyed not being rained on. There was just one problem. Dachary couldn't hear me in her headset. We tried switching headsets. We tried turning them off and on again. We tried wiggling microphones and base-plates… Nothing worked.
For Dachary it was a somewhat lonely experience. She would talk to me; giving me directions, or commenting on things we were passing, and I would respond with a small set of hand signals. For me it was… interesting. I was allowed to just be quiet. I would respond as best I could, but eventually I stopped even thinking about trying to talk in response. While waiting in line for the construction crews I'd sometimes not bother, because it would mean turning around and yelling loud enough to make it out my helmet, ten feet down the road, in her helmet, and through her earplugs. I did make it a point to get off the bike and go give her a hug every now and then when we came to another line.
Of course, we have a spare base plate. Of course, it's at home, because we dropped the ball on a few things when packing for this trip, and the base plate was one of them. :/ We're still not 100% sure whose is the culprit, but it's probably something to do with the microphone on mine. Dachary says I've been getting quieter for days now. 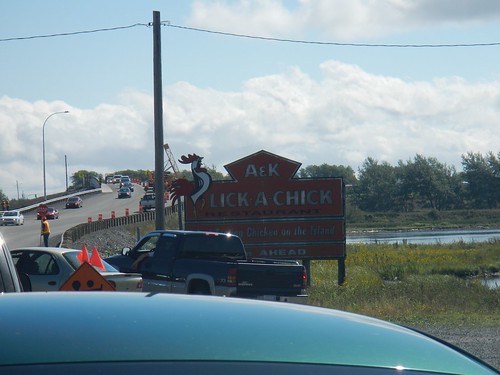 (We both found the whole “lick a chick” idea a little disturbing)
Towards the end of the day we came across signs for the “Our Lady of Guadalupe Shrine” and I had to go. It reminded me of Latin America, which I miss, and it seemed so incongruous to find this here in Cape Breton. Fortunately, it was on the left.
Left is fortunate, because our right blinker has gone out again. We're going to be taking it to the dealer for engine issues when we get back anyway, but in the meantime it just blows bulbs every month or so. We've got remember to stick in the spare in the morning. 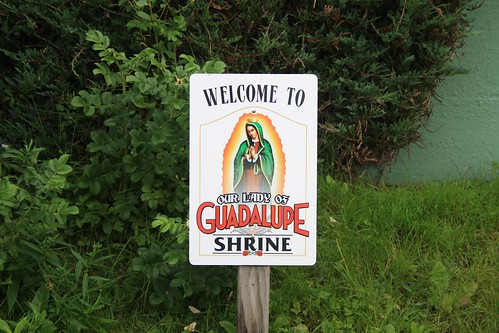 I was kind-of excited when I pulled up the drive. It was huge. 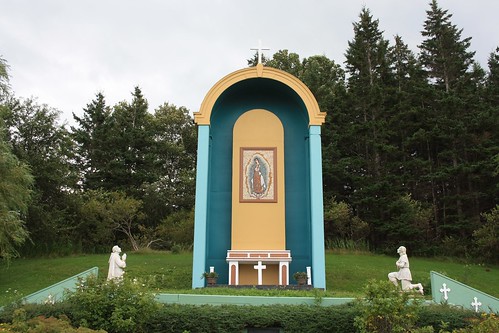 But, it was so… sterile. You'd never see something like this in Latin America. It wouldn't be pristine. There wouldn't be large washes of a single color like this. It would be vibrant! It would be alive. You'd feel… something. This was just so sterile. So… white people.
The statues were a little different. Judging by the dream catcher around one's neck I thinking one of the local indians paid a visit. 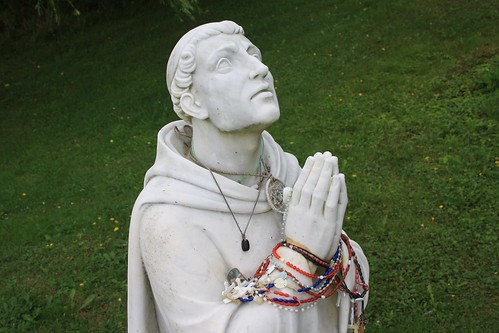 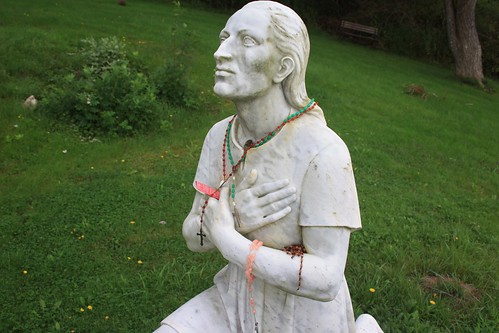 We met some Mi’kmaq at a gas station earlier in the day. They were, like most Canadians: nice people. I was happy to hear some of them still speaking Mi’kmaq, although I had to ask to be sure that’s what it was. Too many native people’s abandoning their languages… The sad thing though, was that they were concentrated in one of, if not the, poorest looking town we’ve seen.

It was in that town that we stopped for “Gas station lunch” which almost always ends up being a pre-made ham and cheese sandwich with some soda and chips. This was the first one we’d had on this trip though, and we found it a surprisingly refreshing, and tasty (not to mention cheap) change of pace. Maybe it’s just because they remind us of our Americas trip.

Eventually, the rain came. It was inevitable I guess, but it did hold off until near the end of the day. When we finally came into Antigonish for a fuel stop we were both considering getting a hotel room soon, and that’s when an RCMP came up and introduced himself to us as one of the guys who’d followed our America’s trip on ADV Rider and had sent us a message about possibly getting together on this trip. Alas, we got the message after we passed beyond his home town. But, there he was in the flesh, filling up at the same gas station, at the same time. Excellent!

Alas, he was on the job, and there wasn’t a good place to get out of the rain and chat anyway, but it was still great to meat one of the many awesome folks we’ve interacted with on ADV Rider. We mentioned that we were considering getting a hotel somewhere around here and he pointed to the motel next door, saying “That one’s cheap”… and directly across the street from it was a steak place.

If they only take pets we’ll have a winner.

They do! Just one restriction. No pets on the bed (“keep them on the carpet”) or they’ll charge us an additional $50…. shit. “Of course” I said, knowing full well the task would be nigh-impossible to achieve, but knowing that we are capable of dealing with simple adversities like this. Dachary grumbled at the restriction, thinking the same thing I did, and then came up with the ultimate solution: lay the sleeping bag over the bed (along with our liners to cover any additional space) and let the dogs get on that. It’s not like they don’t sleep on it in the tent anyway. Now everybody wins. The comforter stays clean, and the dogs get to be with their pack. :)

There is one adversity we haven’t been able to overcome though. We can’t close the main window. It’s old wood with old paint, and it’s just plain stuck, having expanded with the moisture. I’m seriously afraid that I’ll break it, or me, if I yank any harder. I took the sticks out of the other ones, gave a little tug, and down they came.

I’ve acquired steak from across the street, sodas from the convenience store next to the steak place, and the wi-fi was good enough to let us upload images. Now I just need to find a way to keep Dachary warm tonight. ;)