We’ve come to the conclusion that the enjoyment of a motorcycling adventure decreases in direct proportion to the wetness of the rider. Take, for example, the day we rode the Trans Canada Trail up to Inverness. It started off well enough, a bit overcast, mildly misty on and off. As we encountered our first deep puddles I was laughing gleefully as the water repeatedly engulfed my left boot, or splashed up my front. But, as the splashings continued, and the rain picked up, things went from dry, to mildly damp, to downright drenched.

My left boot was such a trooper. It held out for so long, while Dachary’s quickly turned into portable puddles. I admit, I was secretly a bit prideful. A mental “Hah! My boots are more awesome!” At the same time though, I did feel a bit bad. People who haven’t ridden in hard enough rains to create portable puddles in their boots just don’t understand how demoralizing it can be. We’re both agreed that it is the single most demoralizing thing about being wet on a bike. Not the cold. Not the spray in the face. Not the fog in your visor. No, the portable puddles in your boots.

This morning we knew the rain was going to hit us again. We discussed our plans over breakfast. Should we hit the route around the Lakes Region or just make miles towards PEI? I suggested that if we were going to be getting wet anyway, and tomorrow looked to be similar, we may as well see the pretty lakes region, so that’s what we set out to do.

Fifteen minutes into the ride we’d decided to “fuck that noize” since every overlook we passed resulted in a comment along the lines of “I bet that would be pretty (if it wasn’t covered in fog).” Eventually, it was more a question of if it was better to open our face shields and be pelted by water, in order to gain a bit more visibility, or to deal with the perma-fog inside them? In either case, the only way we knew cars we coming was because of their headlights.

From time to time, we would pass a pretty flowing brook… that had transformed into a raging torrent. Most of the rivers looked like they were in various stages of flooding. One of them looked like it was getting perilously close to the road. When we passed a wetland, it was clear that there was way more water than there was supposed to be. The land is getting saturated – it isn’t just our riding gear. 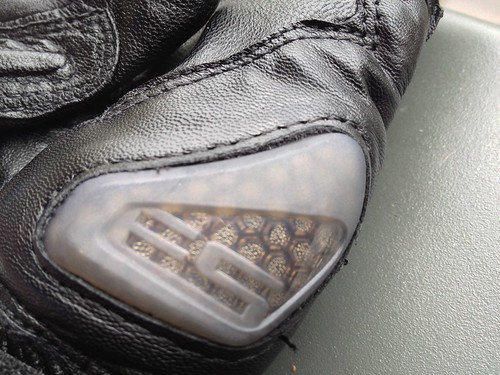 Dachary was riding the Ural again, because my back is still pretty screwed up, but along the way she thought she was smelling Gear Oil (it has a very distinct smell) and we pulled over to take a look. Nothing obvious, and I laid down beside it in the wet stones to see if there was anything leaky looking underneath. All I saw were drips of dirty water. After she helped pull me back up I took over riding it to see if I could smell it too. I admit I did smell something initially, but it didn’t say “gear oil” to me, and it faded fairly quickly. I also discovered that my back really doesn’t mind the Ural, even when I have to hang off of it, muscling it around corners.

Eventually we reached Baddeck, where the topic of saying “screw this, let’s hunker down for two nights while this blows over” was discussed, and agreed upon. My thought was that this is our vacation, and as we’re not actually trying to get anywhere in particular, the goal should be to enjoy ourselves, and Dachary was miserable.

I could have kept going. My Roadcrafter had left me dry except for a line along the leg zippers, my hands, in a newer generation of the same gloves were soaked, and icky. My boots, were wet of course, but didn’t feel too bad as I was still wearing my trash bag liners.

That being said, I love my wife, and dragging her through conditions that just make her more miserable is a heartless thing to do.

I got a hotel for two nights, and the universe smiled on us with a good room, at the best price we could hope for. The Wi-Fi sucks in our room, but… shrug At least we were able to wring the water out of our waterproof gloves, unpack our tent which was still soaked from the last camping, and stick a hair-dryer in our boots.

Napping was had, which has been in short supply on this trip. Then, a walk to a nearby convenience store, as our room has a mini-fridge, where we could acquire soda (pop as the Canadians say) and snacks to see us through the next 36 hours. Happily, we even found Coke! (Canada, or at least Nova Scotia, is all about the Pepsi… it was nice to have Coke for a change.)

The dogs got soaked, and so did our walking around off the bike gear. But it was nice to be able to come back somewhere dry, towel off the dogs and hang our wet clothes to dry.

On tonight’s agenda: Canadian National Geographic television! And reading books on our Kindles! If we had to hang out someplace to wait out the rain and let things dry, we could have done a lot worse. And now, for some much needed down-time. 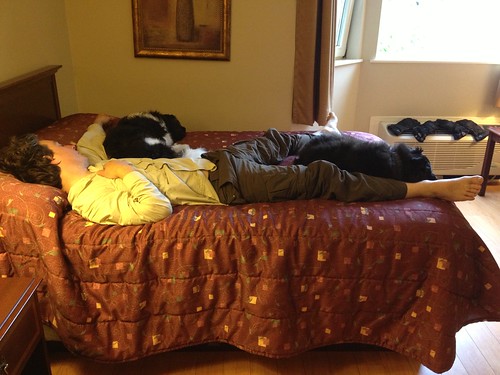 P.S. For those who are wondering: Yes, we used to rave about the RevIt rain gloves. It turns out that they function much better at highway speeds behind full hand-guards than they do at relatively low speeds without hand guards. We’ll have a full review I’m sure.

Day 12 – Baddeck to… Baddeck Day 10 – Margaree Harbour to Ingonish, via the Cabot Trail