Despite complaining about the room, we both ended up getting a pretty good night’s sleep.

Whilst packing the bikes in the morning we encountered the couple in the room next door. Turns out they’re also from Massachusetts and had just done the Cabot trail in their car. He was complaining about all the curves, saying “I don’t think I’ve ever used the brakes so much in my life!”, and suggesting that there may be too many for a motorcycle. We tried to assure him that motorcyclists are happiest when the curves are most plentiful, but I don’t think he really grasped it as he stood there with his Black Lab. Though, he was amused to see how the dogs climbed into the sidecar and got strapped in.

The riding was excellent, and we came to the conclusion that Dachary wants a house, on a lake, in the middle of the woods, because every time she saw a place like that she’d say “ooh pretty”, and has been doing so for days now. 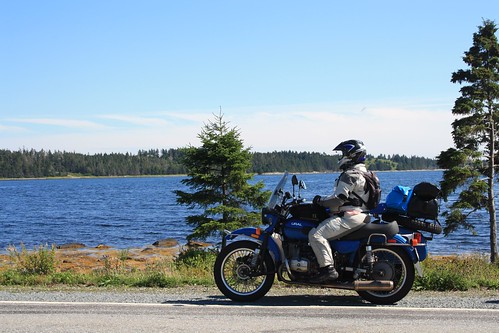 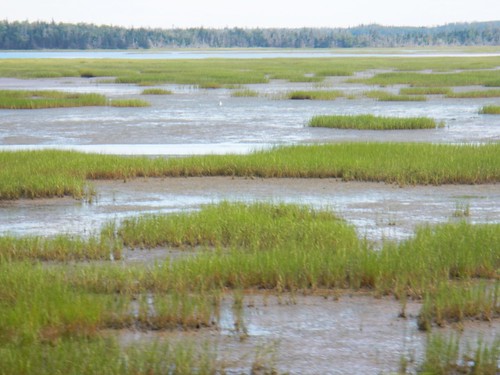 Dachary suggested we should pull off if we saw another sandy beach, so that the dogs could play again, since they enjoyed it so much the last time. A few minutes later, and the universe provided. 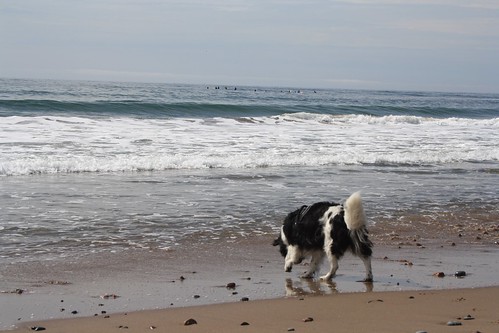 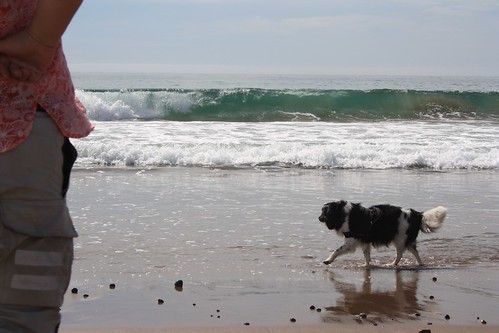 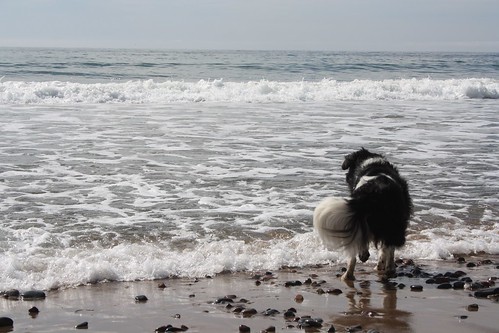 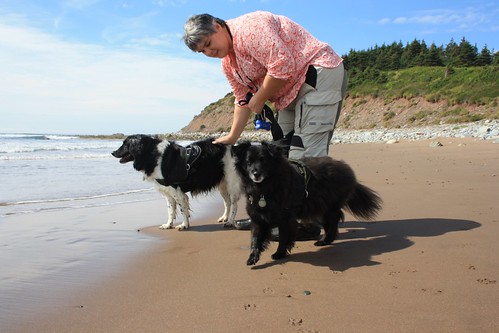 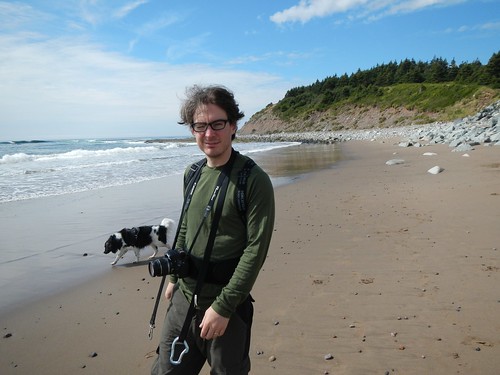 We found the spectacular Henley House Pub and Restaurant just down from a gas station, and we blown away by the quality of the brunch we had. Dachary even approved of the coffee, which never happens. If you’re nearby, you should definitely stop in for a bite.

There was a shady spot to park the sidecar with the dogs as we ate, and afterwards we took a stroll on their dock, and enjoyed the view. 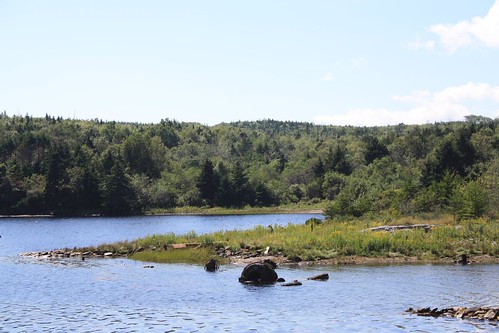 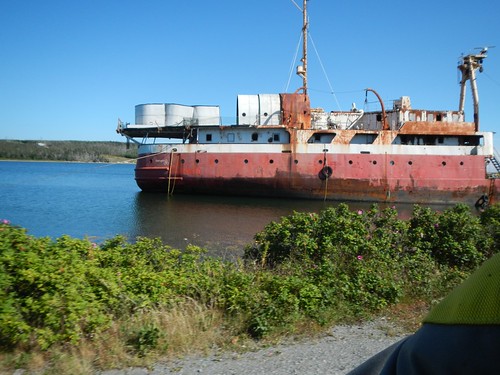 Initially our plan was to ride the eastern shore along toward Canso, but we discovered another Ural changing their back tire at one of our gas stops, and pulled alongside them after filling up our rides. The presence of two Urals in the same place, at the same time drew a crowd even in the middle of nowhere.

Turns out they had waved to us earlier in the day while we ate at breakfast standing outside of a Tim Hortons. They’d talked with someone who had done the eastern shore and suggested that the roads weren’t terribly well maintained, to the point that they had grass growing up through them. 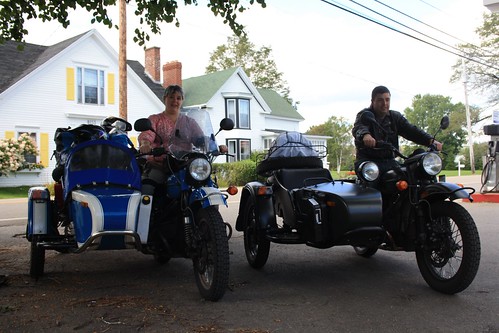 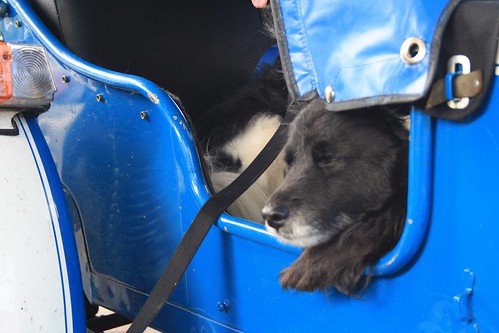 Dachary had been bounced around enough already (The Ural’s shocks do not produce what you would describe as a “smooth ride”.), and wasn’t in the mood to be bounced around more, so we changed plans and decided to head for a beautiful hidey-camp spot we’d seen mentioned in another ride report. There was just one problem. We hadn’t eaten dinner, and didn’t have any emergency food (pasta) in our bags. So, we decided to head for the spot and pick up something in one of the towns along the way.

But things weren’t to be so easy. The roads we poorly maintained and had grass growing up through them.  The largest of the towns had only three houses, and no food was found before the final turn-off to the camp-site, so plans changed again, and we set off in search of food, found  a gas station with an attached building sporting the sign of a chicken holding baked goods, which seemed promising, but ended up having nothing to do with chicken. The supermarket next door was closing and  the woman at the door politely suggested that if I wasn’t there to just grab one thing fast I should bugger off. “Pasta!” I said, and rushed in, saw some pre-made “cold chicken” dinners with veggies and two vegetable based mush sides, which later turned out to be coleslaw and potato salad, and grabbed those. I also grabbed pasta, and snagged a couple drinks at the checkout line. Massive success.

Dachary checked the GPS on a whim and found a Provincial Park we’d added to it that was only about 5k down the road. We pulled in and found it was a “Day Use Only” park, despite the fact that the guide book suggested it offered camping, and had “great views of the bay”. Relatively sure someone would be buy to check the grounds and close the gate we continued on, only to find the actual camping park just around the corner.

Way, way up the hill, we found an office, with a man, who took our money and said “I put you in site number one but take whatever one you want.” So, I went back to the bike, where Dachary asked me if I had a map and I said no, and felt like something of an idiot for not asking for one, but he hadn’t offered either, which is atypical in my experience.  Even farther up the hill we found a site with a great view of the bay.

When dark set, it reintroduced us to stars, and Dachary and I just stood there staring at the sky. 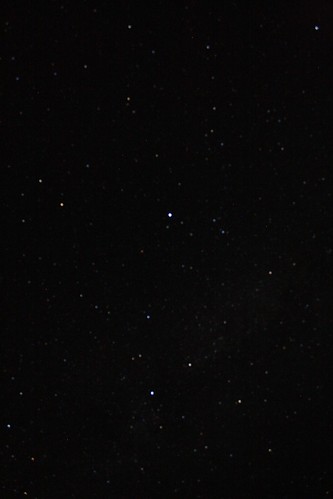 I think one of the keys to successful adventure riding is to be flexible, and not loose hope. We changed plans three times today, and I believe that because we kept trying, because we kept working towards a successful resolution, the universe helped us out.