We’d pulled in relatively early, around 5:00, and started pulling photos from cameras right away. The goal was to get everything uploaded, and the posts written then spend some time relaxing. We’d both gotten sicker as the day had gone on, but we’d forgotten just how much time these posts take to put together.

On our Americas Trip we spent about two hours a night putting together posts. One person would write and the other would relax. It was work, and sometimes we really didn’t want to do it, but it wasn’t too bad. Last night we spent six hours pulling photos from six cameras (2 ruggedized for on the bike, 2 video, 2 iPhones, and a DSLR), going through them, choosing which ones to upload, titling them and tagging their locations, adding titles to the video, uploading the video…. and we were so exhausted that the actually writing ended up being more of the “this happened, then that happened” sort, instead of posts that describe an experience, which is what we think makes a great ride report.

So, we’re not sure what the right way to proceed is… How are we going to manage this on the Round the World trip? How do we find the balance of writing an interesting ride report for you guys, and killing ourselves putting them together. There’s got to be some balance between crappy doesn’t say enough ride report, and ones filled with lush detail.

Today started off better. The Holiday Inn had a real breakfast with actual hot things like eggs and sausage. So, that helped get things going on the right foot. Sadly, my cold has gotten worse. I was a mouth-breather all last night, ended up drinking a ton of water to compensate, and then peeing constantly to compensate for that.

Finding Kottwitz Werke (the ural Dealer in Halifax) was pretty easy, and Lutz and Reg welcomed us into their shop and set to work immediately, and noticed that the stupid hose clamp that goes from the airbox to the left carburetor had come off… again. Ural has since replaced the 3 piece jury-rigged looking setup with one flexible rubber tube, and Lutz had a couple on hand which he showed me and I eagerly accepted. No promises that it will stay on better, but I’m convinced it will, and even if it doesn’t it’ll be less of a pain to deal with than the old one. 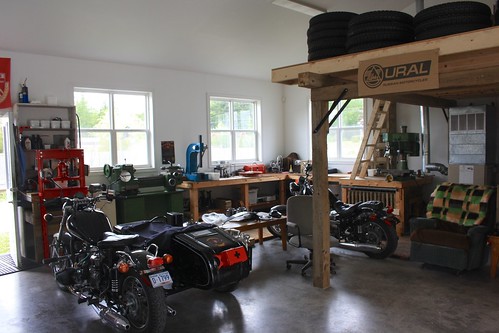 Lutz told us about a nice walk we could take with the dogs, but with both of us sick we decided after a little way to come back, set up the Kermit Chairs, and just enjoy some quiet down time. Frankly I was wondering if they were ever going to get used. The problem is that most campgrounds seem to be infested with mosquitos, and you don’t need them at a hotel. 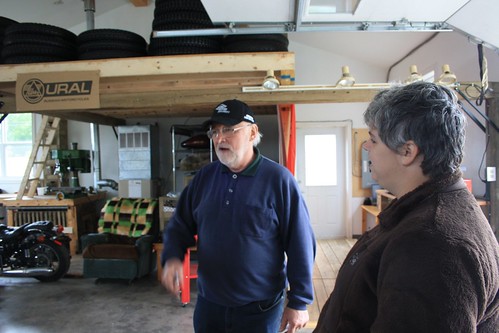 In the end they replaced the tubes, from the air box to the carbs, replaced the air filter with a paper one. Our reusable one was apparently quite dirty (I still haven’t looked) despite having been cleaned just 2,500 km ago. He twiddled the carbs, which were apparently out of sync, despite being synced just before the trip, and checked the timing, which ironically, was fine. 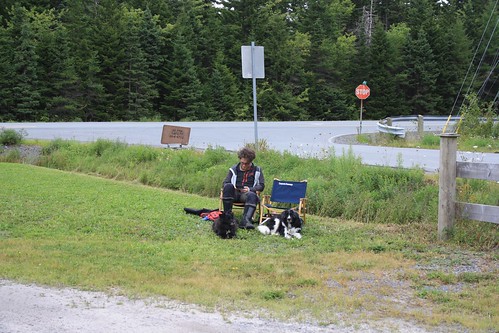 Dachary was chatting with Reg towards the end and noted that they were amused by our bar-risers. Apparently only old people who don’t want to bend over get them around here. We want to not be old people who can’t bend over so we put them on all our bikes, and our backs thank us for it.

Meanwhile I was having a discussion with Lutz about the virtues of the Aerostich Roadcrafter 1 piece. Lutz swears by his. Me? I’d brought mine on this trip in an effort to convince myself to not bring it on the RTW trip. It’s a custom fit, and I love the feel of it, but I keep worrying that I’m going to melt on hot days. Lutz argued that he’d taking his down along the Mexico – US border through some pretty hot days without issue.

So far this trip is having the opposite effect. I’m loving the suit more and more every day. Yeah, I wish it had better ventilation, but it’s not bad, and the fact that I can slip it on or off in 27 seconds (I timed it), and have walk-around clothes underneath is so nice.

Anyway, after giving Lutz some well-earned cash we set out for Peggy’s Cove. The idea today was to do something then head back to Halifax, grab a hotel early, and just rest. Peggy’s Cove, it turns out, was just about 30km from the shop, so down we went. 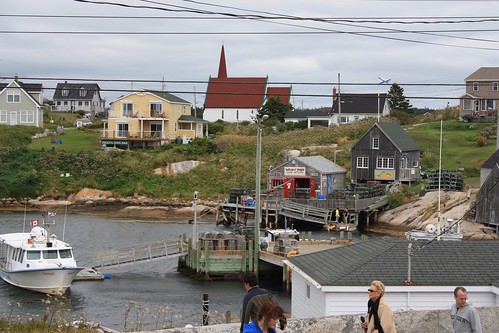 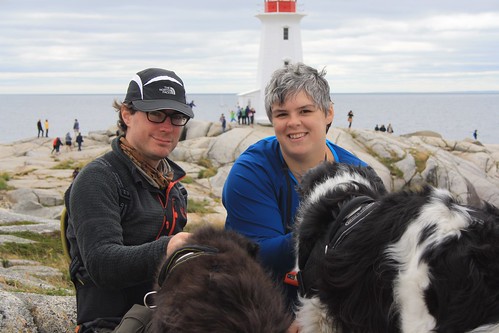 Dachary sat while I went into the restaurant at the top of the hill with its literal bussloads of tourists, and order us up some grub. It sucks to have to avoid sit-down meals so ofter because of the dogs, but shrug, everything’s a compromise. 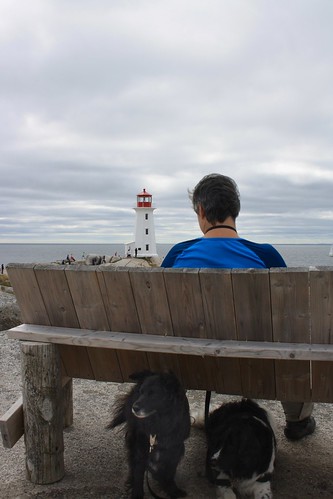 We grabbed some fish and chips, and some Solomon Gundy (Canada Style, not Jamaican Style) because it’s one of those weird sounding foods things you just have to taste.

We took video of it, but apparently the video we uploaded last night never completed correctly, or something, and the current net connection is crap, so it’ll just have to wait. :/ 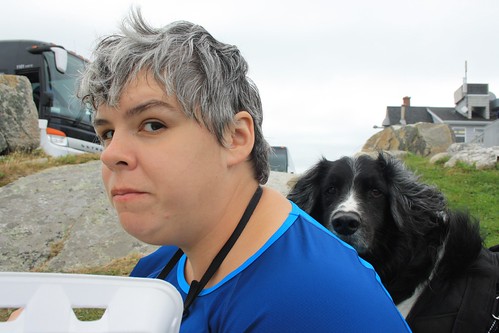 There was some concern about the Ural on the way there. It seemed to be stuttering a bit around 80kph, but we didn’t have a highaway to get it going any faster on.

On the way back we made sure to hit a highway ASAP so that we could turn around at take it back to Lutz if there was a problem, but there wasn’t. It ran great. Plenty of power (for a Ural). So, back into Halifax, and on to a Holiday Inn I’d seen earlier in the day on Expedia that claimed to have a discount today, and after the nice accommodations last night we were kinda looking forward to just relaxing and getting ahead of our colds a bit. But no, they were full.

Turns out that Labor Day weekend is “Party Weekend” in Halifax, kind-of like “Spring Break” on Miami Beach. So, everything’s booked. We ended up in a Comfort Inn with chew marks all over the bathroom doorknob because someone locked a large dog in there and went out. The place smells of the ghosts of cigarettes past and the bed is … crap. Dachary suspects bedbugs but a quick inspection for their signs has revealed nothing yet. God I hope not. 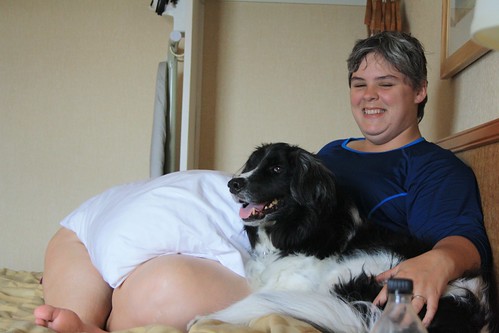 Bandido’s not so sure. We’re with Bandido.