Sure enough – we’re getting sick again. Woke up late this morning (at around 8:30) and I didn’t want to get out of bed. Kay said that he hadn’t slept well last night – he hadn’t been able to fall asleep until after 1:30am, and when he did, he slept fitfully. I’d fared better, but I managed to set up my sleeping pad on a rock, and then let too much air out of it, so I kept getting a rock in the hip and did a lot of tossing and turning. I’d also managed to get utterly mosquito-eaten when I stepped out of the tent to answer the call of nature. Neither of us was in great shape.

I decided to forego my morning coffee ritual since we’d woken up late, and I wanted to get to Halifax by the end of the day so we could get the Ural in for service tomorrow morning. Did the morning routine, which includes hand-feeding the dogs a few handfuls of kibble so I can give Kay’s dog a pill to help with the arthritis in his gimpy leg. 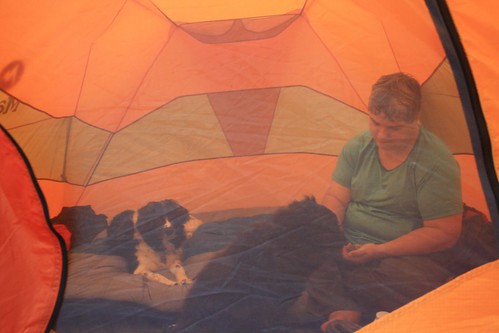 After all was said and done, we were packed up and out of the campground shortly after 10am. It was a beautiful place, and I wished we had more time there – but the mosquitos were ravenous.

I needed breakfast badly – my body is clearly feeling the effects of being sick, as I felt weak and didn’t really feel up to manhandling the Ural around the twisty corners at any sort of speed. Unfortunately, Shelburne didn’t seem to have much in the way of food, so we headed off down the scenic route hoping to find something for me to eat.

Around 45 minutes later, I was getting desperate and the road deviated – the scenic route continued to the left, but there was a town straight ahead that might have something to eat. We pulled into a convenience store and Kay went in to ask about food. The girl told him that the pizza place we’d just passed a few minutes back might have something, or we could go into town but the stuff there would be pricey. I said “no pizza” – pricey was worth it if it would keep me safe driving the Ural. So into town we went.

The signage wasn’t exactly clear, but eventually we found the main road, and we spotted a couple of cafes and the Town and Country Diner. Diner fare sounded like exactly what we wanted from breakfast, so we headed in. There was no-one around, but the door clanged behind us and a woman came out from the back and told us to sit wherever we’d like. We chose a spot where we could keep an eye on the dogs, and she brought us some menus. Pancakes! Success! With local blueberries. That sounded tasty and tempting, so that’s what I got. Kay got his normal breakfast go-to – french toast.

The woman vanished to the back, and a long time later, our food arrived. It turned out that she was the cook, too, and another woman had arrived to help out taking orders in the dining room. The pancakes were absolutely delicious. They were crispy and yummy outside, and cakey inside. The blueberries, however, were a bit of a surprise. It was more of a blueberry soup in the center of my pancakes than the blueberries I was expecting to be scattered throughout my pancakes. I was dubious, but it was actually super tasty. I happily ate as much as I could hold, and I shared my pancake soup with Kay for his french toast as apparently they didn’t have maple syrup – when he asked for it they gave him honey instead. I won at breakfast. 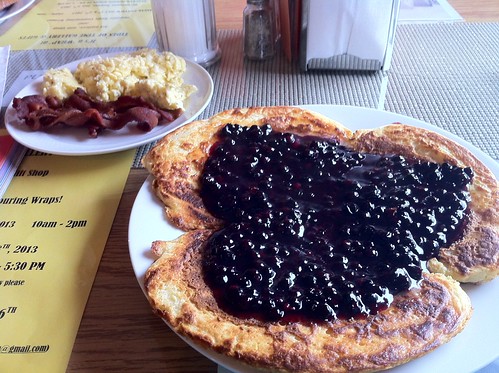 But Kay won at having crazy hair. 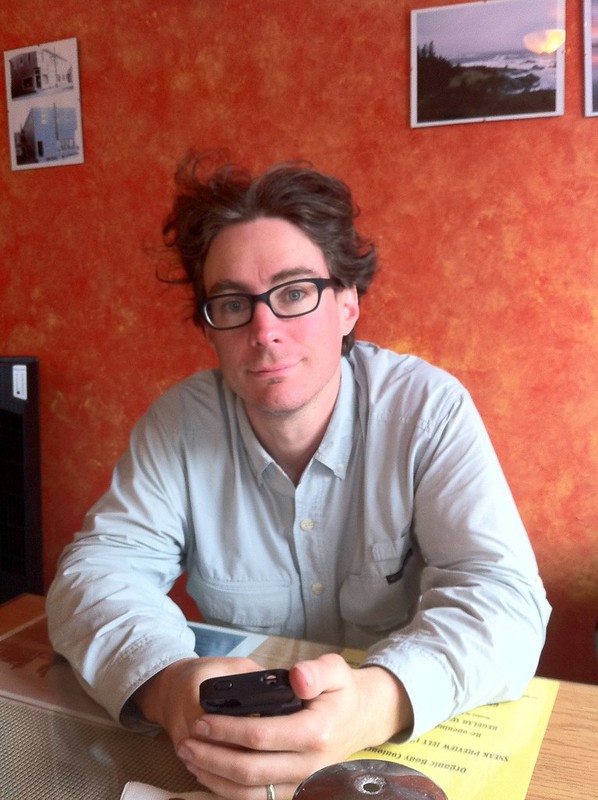 Alas, because the breakfast took so long, it was 12:30ish before we were back on the road. We were both feeling sluggish and it showed. Neither of us was as enthusiastic as usual today. We decided to cut off a loop of the south shore scenic drive by hitting the highway, and then re-connecting with the scenic route around Bridgewater so we could see Lunenburg (a UNESCO World Heritage Site), and some other pretty towns around Mahone Bay.

The plan worked that far. At Bridgewater, when we got off the highway at around 2pm, I needed gas for the Ural again and Kay needed a break. We each ate a protein bar, and shared a Coke between us. At this point, it was already clear that we weren’t up for much, and we would be hotel-ing it tonight. I cut a few more things off our scenic south shore plan (exploring sea caves was right out with our low energy levels) and we headed down the road toward Lunenburg.

The town is pretty. I can see why it’s a UNESCO World Heritage Site. Unfortunately, we didn’t feel like getting off the bikes and wondering around, so we have zero pictures of it. Sorry. If you’re ever in this part of the world, though, and you want to wander around a pretty, picturesque town with tons of shops and a nice waterfront, make it a point to stop by.

A bit further down the road, we encountered the town of Mahone Bay on Mahone Bay. More pretty scenic road. 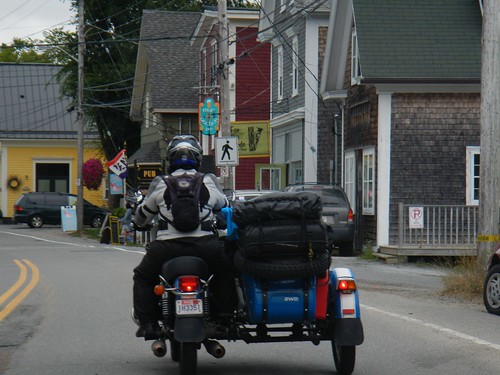 Then I missed a turn, and suggested to Kay that we get back on the highway until we needed to exit for Peggy’s Cove – the final thing we didn’t want to miss before getting to Halifax. So we did.

On the highway, I was really starting to flag. The Ural’s performance issues were absolutely killing my morale. It finally started to rain on us, which dropped my core temperature right down. I was feeling weak and sick and sorry for myself. Somewhere along this route, I said to Kay over the headsets: “How would you feel if we missed Peggy’s Cove today and just headed straight for Halifax? It would add over an hour, and probably closer to two, to our day. It’s not far from Halifax, though, so if we really want to hit it, we can try again tomorrow.”

Kay acquiesced. I don’t think he was feeling much better. So we hoofed it for Halifax in the rain, getting more tired and miserable by the moment.

Into Halifax, and I attempted to pull off at a random exit to find us someplace to scope out hotels. It failed – I just managed to exit onto another highway. I tried again, and this time managed to get us into a Tim Horton’s, where we parked and Kay consulted Kayak on his iPhone to try to find us a reasonably priced hotel. It turns out, though, that there are SO MANY hotels here in Halifax that Kayak wouldn’t load. It just got to 98% and then froze. Kay tried a different app. No success. Then he tried downloading a new app from the App Store, at which point I suggested I just get the GPS to take us to the nearest hotel – a Best Western at Chocolate Lake (which I had wanted to visit here in Halifax because HELLO! CHOCOLATE LAKE!) So we did.

Alas, it turns out that the Best Western was fully booked. The woman there called Holiday Inn Express for us, and they only had 4 rooms left. Kay took it over the phone, and then we headed off in this direction. Happily, it gets us closer to the Ural dealer.

We got here shortly after 5ish, and loaded our tired selves and the pooped doggies into the hotel. We’ve used our evening productively in uploading photos and video from the past 3 days of not having good net access, and I took one of the most amazing showers of all time – the water was HOT and the water pressure was GOOD and it felt amazing after being so cold and wet on the bike. We ordered delivery for dinner so we could just hang out and make the most of our net connection, but alas – the meal was lame. I fail at dinner. (Yes, we missed lunch along the way.)

The plan is to hit the Ural dealer tomorrow for its 15,000km service (easier to do it at the dealer for a change instead of trying to find a place to dispose of the oil and the used oil container) and he can hopefully help us diagnose the performance issues we’re having. And hopefully, the evening of sitting inside a warm room, and the night of sleeping in a warm bed, will have us rested enough to continue on and do a lot more camping along the way.