We made a conscious decision about this trip. We were going to spend time where we felt it important to do so. We weren’t going to stress about making miles. We were just going to enjoy.

Skye made us popovers and saussagey eggs, then we chatted in the grass outside, shared some great music finds (her’s was Lhasa which I think I actually turned her on to years ago, mine was Daniel Waples, uploaded the video of the dogs in the Ural (damn that took long to get processed and uploaded)…

There was one critical decision made… when we left, due to our colds, we said we’d make a call sunday morning… were we healthy enough to continue on, or should we call it, go back home, and re-start the adventure a week later?

We rarely get to spend time with Skye and part of me was wishing we could stay a couple days there, but there’s only so much time in this trip, and “damn it, we’re gonna have a trip!”, so we suited up and headed out. 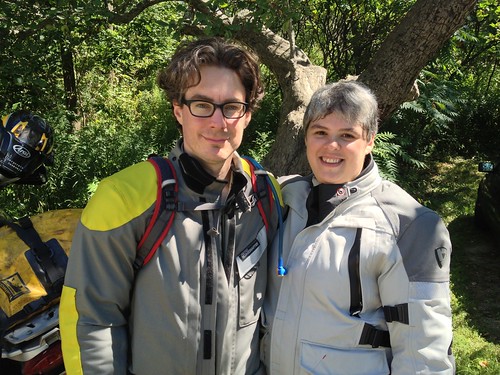 (Yes, I’ve gone with the ’Stich for this trip… more on that later I’m sure)

We passed through many miles of pretty Maine lands, eventually stopping for a Lame Lunch of Lameness… The Chicken Salad wraps were so bad we went back and bought pre-made turkey and “cheese food product” sandwiches, and the delicious cookie from yesterday was actually the best thing we ate. 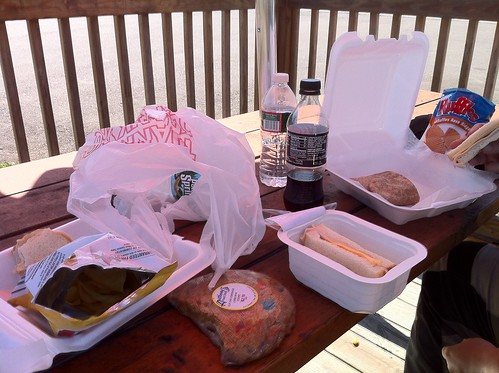 How to divide an unrippable sandwich from Corporate Runaways on Vimeo.

Lunch would have been a total write-off except for the Harley Riders. When we pulled into the place there were a couple of ladies in full Harley regalia, but each riding their own bike! Turns out they were from New Brunswick and suggested we be sure to spend time on the south coast (of Nova Scotia).

Then, after partially consuming the lameness I struck up a conversation with a man called Harley, about his Harley. He’d only had it for a couple years, because he envied seeing the friend he rode in with passing his house with a smile and a wave from the back of his harley. Now they ride around locally, not venturing more than a hundred miles or so from home, but still just enjoying being out on their bikes. While he wore a Harley jacket, I got the impression he really just rode because it made him smile, not to be part of “lifestyle”. That made me smile. 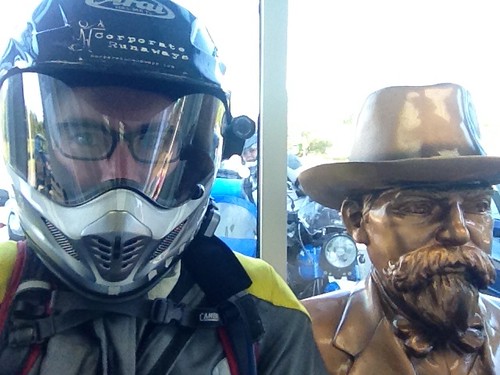 …because you should never pass up an opportunity for a cheezy tourist photo.

Eventually we made it to

Put our shades back on 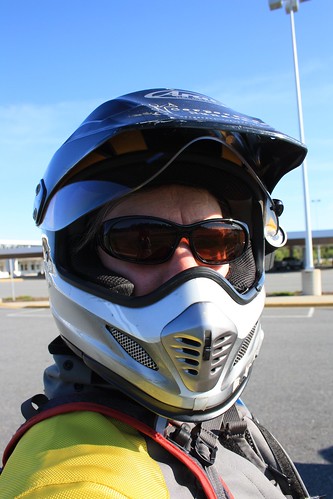 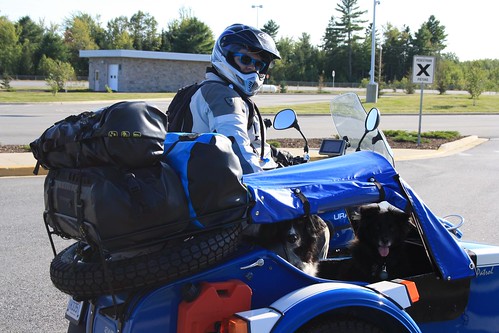 And hit the road.

Our Goal was to make it to Saint John, for the Chocolate Museum, even though it would be closed by the time we got there, but there was confusion and the Chocolate Museum was actually a little ways back. But, Saint John’s was big enough to have real ATMs so that we could withdraw some Canadian dollars and not suffer the outrageous international charges whenever we use the cards.

Just one problem, Dachary’s still sick. I’m still fighting off what she has and she spent half of last night hacking up a lung… The board was convened and an executive decision was made. Hotel!

Yes, I fear this is going to become a running joke….

Also, internet and net connection so that we could write up yesterday’s post, and today’s post, and upload some video, and and and …. Where to get food? Papa John’s delivery please! Turned out to be a good idea, it was 7 PM home time (8 pm NB time since we lost an hour crossing the border) and Dachary started to have a sugar crash shortly after getting out of her gear and sitting down.

Unfortunately, Dachary managed to spew tomato paste onto her fancy new tourquoise shirt, repeatedly… in at least five places. Even the latest addition to our kit (a Tide Pen) has been unable to fully address the damage. There was much scrubbing. There will be more. Maybe some soaking too…

Hopefully your weekend was as good as ours. Now, keep your fingers crossed for a lack of sickness, and a healthy dose of camping.