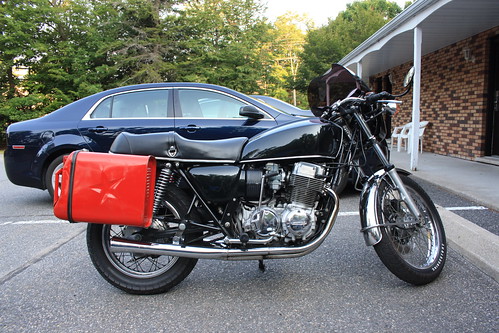 During the evening a snazzy 1977 Honda… something parked beside the Ural. As we packed up the bikes in the morning I found myself talking bikes with its owner / maintainer. Apparently parts are getting hard to find for…whatever it is, but as he talked he smiled with memories of hours spent wrenching on it.

He and his girlfriend wandered off to the free continental breakfast, which Dachary and I had both forgotten about. I decided to go scout it out and see if it was worth bothering with. It seemed borderline, but eating here would save time, so we went for it. It was the wrong choice. The cantaloupe was mealy, the muffins tasted of excessive preservatives (neither of us had more than two bites), the orange juice was fermenting, the donuts were lame, the coffee undrinkable. The pre-packaged yogurt was decent, but didn’t really constitute enough breakfast to sustain us.

Time wasted, and tummies mostly empty, we set out to an already toasty morning, to find that the next exit on the highway had a KOA campground… In hindsight the extra money saved by not paying for a few days worth of data on my phone in Canada would have been more than worth it in the savings. But, “spilt milk” and all that.

At our second fill-up of the morning we had a rather odd experience. Three cars pulled up in a row in front of our bikes. Three families piled out. One half of the adults immediately began smoking, all of them stood around talking and doing the standard type of milling about one does when getting out of a car to stretch your legs at a gas station. But no-one, not even the children, gave us anything more than a half-second glance.

Now, we didn’t get the Ural to draw attention to ourselves. Most days we’d rather not have the extra delays. But, it does draw attention. It’s unusual. You rarely see a sidecar. Add in the cute dogs and it really draws attention. Especially children’s attention. They’re always “oooh doggies!” and the slightly older boys are all “oooh cool sidecar”. But no-one looked. I can understand, people in a rush, going hither and thither not looking. But these people were literally milling about 15 feet in front of the bikes. Even if you don’t care about motorcycles, or dogs, or strangers done up in full gear, the only other thing to look at was gas pumps. Surely we’re worth a glance in that context… But no.

They piled back in their respective vehicles and drove off. Very odd.

The driving was nice, but not quite as pretty this time. We made better progress, though, for having stopped in the hotel. We’d gotten a decent night sleep, and neither of us were as exhausted as we were yesterday. The dogs, curled up in the tub and kept cool. 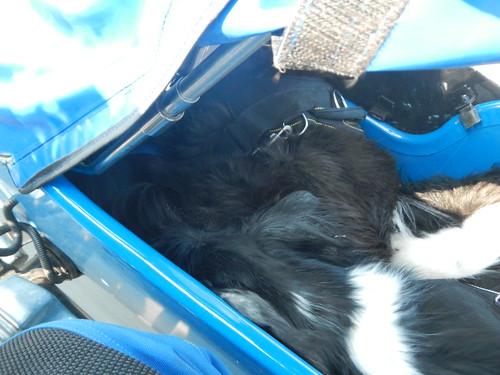 Before crossing the bridge into the US, we stopped to water the dogs and let them do their thing, in case the border crossing was long. A French speaking couple pulled up beside us on the Harley with matching trailer. They glanced at us, but didn’t make any attempt to speak to us. 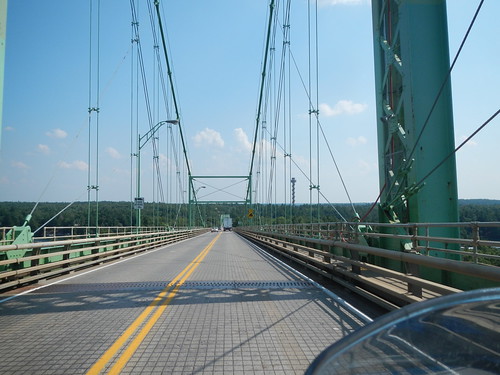 The heat seemed to increase as we approached the border. Logically, I know it didn’t, but the shade disappeared, and men in fluorescent vests waved people into evenly distributed lines, where we proceeded to sit… and sit… and sit. I commented to Dachary that it didn’t matter that these guys were just meandering around casually waving people into lines. They were totally earning their money, as it was almost 100° again.

When we entered Canada it was all “Come on in. Don’t forget to wipe your feet.” At the US border it was all “Who are you?! Take off your helmet! What do you want?! Why are you here?! WHY ARE YOU HERE!!!!!” She asked me where I lived and I told her our address in Cambridge. Then she asked me where I was going and I said “Home to Boston.” “What?!” You could see her hamster wheels spinning. “That’s not where he said he lived a moment ago!” Ugh. Cambridge, Boston. Same fucking place. If we say Cambridge to strangers they have no clue where it is, but they know where Boston is, and we’re only separated by a river. While holding my US passport in her hands she asked me “Are you a US citizen?” I’m sure it’s some legal thing so that they can have bad people lying about it on tape, but realistically there’s only one answer to that question. Either I am a US citizen or I’m pretending to be one. Either way, I’m going to say “yes”. They also asked if I was born in the US, which makes no fucking sense to me. Who gives a shit if I was born here if I’m a citizen?!

Anyway… we made it through, and they didn’t give a shit about the dogs either.

Upstate NY was beautiful, and looked like you’d hope it would. 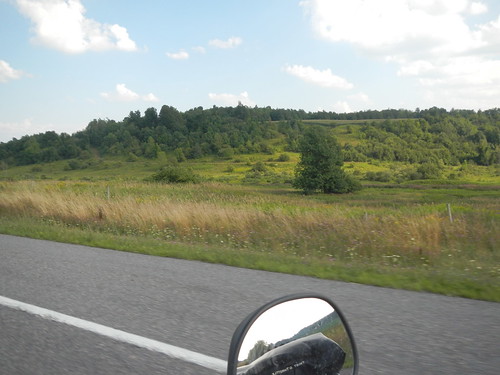 Lots of green. Lots of farms. Small towns. Around dinner time we started looking for home-cooking kind of places, but everyone we found was closed, or wasn’t where the GPS claimed it was. We gave up and ate at Arbys.

As we were about 50miles from Utica NY, and Utica is about 5 hours from home, Dachary lobbed the idea of just saying fuck-it and driving home, then left me to ponder it. The only campground on our way was a KOA that wanted $50 a night because the only sites they had had RV hookups. Cheaper than a hotel, we headed for that.

Our headsets had run out of juice again (the G9s don’t seem to be as good as the G4s on battery life) and I pulled into a rest area kind of thing as we neared the campground. We debated for a bit and eventually figured that while I was holding up alright, I could feel the exhaustion from the day weighing on me, and while we’d both have loved to have just said “screw it” and ridden the whole way, the right decision was to go pay way too much money to stick up a tent. So, we continued on towards the KOA, but not far on I spotted another campground, and decided to give it a shot. We turned around, and …. Yes, they would give us a spot in their “overflow” area, which turned out to be a big grassy field near the “games room” (building) and the pool.

Dachary was a little skeptical, but it was $20 cheaper and my past experience with campgrounds led me to believe that despite the noisy pool everything would get pretty quiet when dark hit. I’m happy to report I was right.

Before that though, the nice lady at the campground pointed us to the little caboose next door that sold soft-serve and hot dogs.

The portions were huge, and we got a “small” one for the dogs. Turns out that Ben chooses to lick, while `Dido likes to bite. So, once again, dogs are like their owners, or vice-versa. 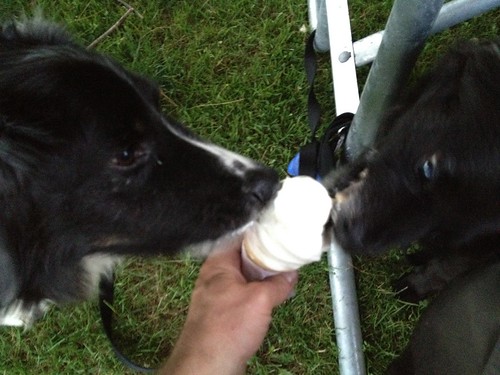 Sadly, the nice lady, and the tasty soft-serve didn’t mean we were going to have a good night. As we settled in to bed it was over 90° and the predicted low was 75°. We left the fly partially covering the tent, and partially off, as the weather forecast had said that it might rain overnight. With the fly partially on, it would be a quick task to pull it the rest of the way over the tent and keep the rain out. We opted to put the fly over the sleeping bag, because it’s down and down takes forever to dry, and left the front of the tent exposed to the elements. At least it was a little cooler there.

For once, Dachary got to sleep fairly quickly and I laid there for hours. Eventually I began a battle with my bladder. I’d get up, pee what felt like a litre, go back to the tent. Lay there for five minutes, feel like I had to pee again, argue with my body that it couldn’t possibly have more pee, give up 15 to 20 minutes later, and then repeat the process again, and again.

Come morning, Dachary was sprawled across the top of the double sleeping bag. I was on the dog bed. Ben was with Dachary, and `Dido was on the ground. For a while I was on the ground simply because it was cooler and by the mesh door. The fly even half-obscuring the tent really retained heat in that part of the tent.

It was a miserable night. I barely got any sleep, and I was probably awake long enough to actually drive home. However, I doubt that I would have been awake enough to be safe on the roads if I had of attempted the drive, so I don’t regret the decision to stop. It did make us quite grateful for all the hot humid nights across the midwest where we’d stopped in an air conditioned hotel early in the day. While we thought we were getting very little rest, it was nothing compared to how little we would have gotten if we’d attempted to camp those nights.

The universe watches out for you. You’re just not always aware of it at the time.

Dachary’s note: To be honest, it had felt a little frivolous to give up driving in the extreme heat and get an air conditioned room in a hotel instead of camping like we had planned. I felt bad that I enjoyed it so much. The dogs helped us to justify it, as they can’t sweat and therefore are much less able to regulate their body temperatures; we sorta felt we needed AC to keep the dogs safe in that crazy heat. But it was an easy way to rationalize it for us, too, or at least that’s how it felt to me.

After having now camped in temperatures approaching the extreme heat we faced in the midwest, I’m SO GLAD we sucked it up and got hotels those nights. We just got no rest at all, and woke up feeling exhausted and gross. If we’d been doing that all the way across the midwest, I’m skeptical if we would have made it to Colorado at all, and certainly not on our timeframe. So while it felt a bit frivolous at the time, I now feel totally justified in having spent that cash even if it meant we weren’t “hardcore” and didn’t camp as often as planned. The trip would have been drastically different if we’d done things as planned – harder and more miserable, and not as safe, I think, because we would have been so exhausted.