We were too tired to do the service last night, and also way too far behind in the posts. We opted for the less physically taxing task of choosing and uploading images, writing the final day’s post, and putting images into old posts. It took a while, but finally, finally we were caught up.

Dachary set the alarm for seven, we got dressed, and headed down to do the 7,500 km service. Dachary left me alone for a few minutes which resulted in three quarts of oil going in instead of two. I thought it needed three and a bit, not two and a bit. Already overheated and hungry she was less than thrilled. I got back under the bike and started draining. Eventually, we got the right amount. 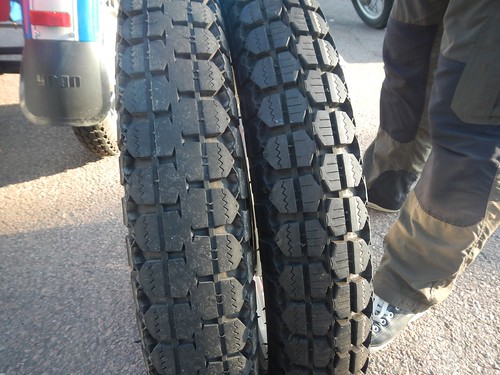 We’d also been keeping an eye on the pusher tire’s tread, and decided to wait until this change to swap it for the spare. We could rotate the tires every 1,500km but to do so on the road is somewhat masochistic. As you can see from the pic, it was definitely time. Yeah, there’s still tread on it, but running a bald pusher tire in the rain seems a bad idea. We’ll keep it as the spare until the end of the trip.

When we pulled the spare off the back we got an unexpected surprise: rust. Brand new wheel, never used, already rusty. They come with a little plastic rim around the rusty edge to keep it undamaged because that’s where the brake shoes are about to rub, but… 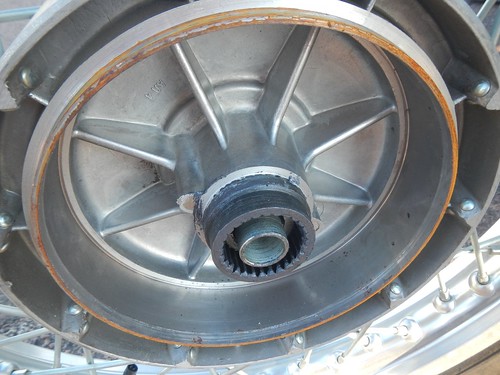 Just as a tally that’s rust in the splines on one of the rear wheels (I forget which), the front bearings (still need to replace those when we get back), the steering damper rod, and the spare tire. There’s also rust developing on top of the headlight, and the sidecar bumper bar thing. For $14,000 I expect zero rust for quite some time, and definitely not at the first service.

After we put on the spare tire Dachary grabbed the tire pump that came with it, and it self-destructed. This, sadly, had been predicted by the Soviet Steeds. It’s apparently just what they do. We, of course, had our trusty Cycle Pump with us. We love that thing. It’s standard procedure for us to carry the Cycle Pump and a manual backup. The Ural pump was the manual backup. 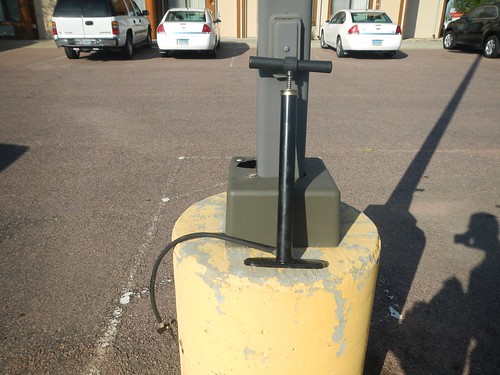 Service finished, we headed back inside for the continental breakfast (pretty decent, but all carbs), and Dachary took another quick shower just because she could.

Everything packed up to load on the bikes, riding pants on, and I am walking around the room yawning. So tired. It was to be an omen.

Packed, loaded, dogs in tub, off to Wallmart again to hand over the used oil. Thankfully, they could take the container too. Most auto-parts shops are only allowed to take the oil.

It was 11:10 when we were finally gassed up and on the road. Within an hour I was staring lustfully at the billboards advertising hotel rooms with air-conditioning and beds. Not ten minutes later Dachary mentioned over the headsets how she was having the same thoughts. Towards the end of the first tank I was having trouble staying awake. I called for a slightly early rest-stop and lunch so that I didn’t drive off the road into a field.

We found a Subways with some shade (it’s scary how few places have any shade) and each got a foot-long sub to split. We’ve been consuming a ton of calories and I think we’re both running at a deficit despite this. I was so tired I could only eat half of one. I just didn’t have the energy to keep eating.

Usually when I’m tired, getting off the bike and walking around for a minute will revive me pretty quickly. This time I got off the bike, sat down in the bathroom and thought “oooh, I could rest here”, which is, of course, a bad sign.

On the road Ben, who is normally strapped in the back, managed to somehow get himself curled up into the nose, after spending about 20 minutes acting as a hassock for ’Dido’s butt. I couldn’t really see the details, but over the headsets Dachary and I thought maybe the knot shortening his leash from the trunk had come undone. Seemed implausible but what else could it be? I took a picture to examine later. 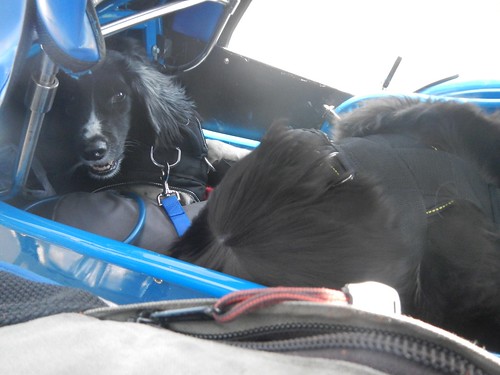 It’s a little hard to tell if you don’t know what you’re looking for, but the harness under Ben’s head is not attached to him anymore. He’s also pulled the Camelback out of the nose to make more space for himself, and apparently to use as a pillow.

The problem was discovered before we got a chance to examine them though. Somehow Ben had gotten out of his harness. Unfortunately he’s right between sizes. Bandido’s seemed like it might be too tight for him at its full expansion, so we got the next size up, and tightened it as much as possible. We like these harnesses, but there’s not enough overlap between sizes I think. Ben probably turned, pulled against the leash and backed out of it.

But, before we made it to the next rest stop and discovered that, I was calling over the headset for Dachary to start talking to me. It is the only think that will keep me awake when I’m very tired. It’s pretty difficult to start talking to someone on demand, but she stepped up and started streaming out whatever popped into her head. It worked and I made it to the next rest stop without falling asleep.

Drinking caffeinated sodas in the shade of a tree near the next gas station, Dachary was yawning, and we half-jokingly talked about just getting a hotel now, and going to bed. Pretty soon we were calling the hotel on the far side of the gas station to see if they took dogs.

I don’t think we’ll be able to make up the missed miles in time to keep going through Canada on the way back, but we had to stop. Dachary never talks about being sleepy this early in the day, and I had no confidence I wouldn’t be falling asleep again after another 20 minutes on the road.

Canada be damned. We got a room.

It smells weird here, but we didn’t care.

When we rode from Boston to Ushuaia it took us four months, and we felt we were pushing ourselves, and we definitely had to skip things for lack of time. Dachary did the numbers while riding today and realized that if we had done that trip, at the pace of this one we would have finished it in two months.

We’ve been on the road for thirteen days now without a break, pushing hard, mostly on boring interstates (gotta make the miles) with temperatures from 89–110°F everywhere except those few days in Colorado. We’ve gotten up early to beat the heat and we haven’t had time to open our kindle’s once.

One of the things we loved about the last trip was that we had time to relax at the end of each day. We’d still write the big posts, but we’d watch an episode of something we’d downloaded on the iPad, or read something on our Kindles. This trip it’s ride, sleep, ride, sleep.

The goal of this was, of course, to have a good test trip. As someone has mentioned, this has excelled at that. We’ve learned a lot about riding with the Ural, riding with dogs, and what makes a good sidecar cover. We’ve also learned about riding in crazy heat day in and day out. Chilean desert? No problem. Day after day of midwest heat with no rest? Problem.

We came in, tested the bedsprings, took a shower, and curled up for a nap with the dogs. Still tired, we got up, and had dinner next-door. We both ordered the Steak and Ribs plate with Lyonnaise Au gratin. I was handed a medium steak and small ribs. Dachary, a medium ribs and small steak. Our Lyonnaise Au Gratin, which we’d both been looking forward to looked suspiciously like a pile of hash brows on cheese sauce. As hash browns are an option on the menu I asked the waitress what the difference was between hash browns and Lyonnaise. According to her Lyonnaise is “hash brows with onion”. I refrained from correcting her. The ribs were cooked to perfection, but I couldn’t actually taste them because of all barbecue sauce. The steak was medium, instead of medium rare, and frankly the most uninspired steak I’d had in a long time. I attempted to channel the flavor of the one at the River Rock back in Walden through force of memory, but failed. The Caesar Salad was lacking flavor, the bread was horrid, and at the end of it all we were both a bit hungry still but I really didn’t want to give them any more of my money.

Yes, we both ate a serving of ribs and steak and salad, and still wanted more. Riding in this heat burns a ton of calories.

Back in the room, we are looking forward to watching an episode of World’s Toughest Fixes on the iPad, one last dog walk, and lots of sleep, now that I have finished this post. Goodnight folks. 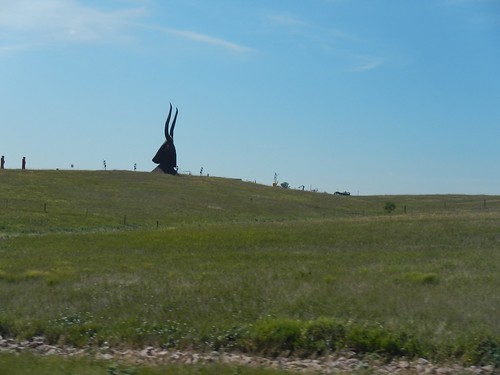 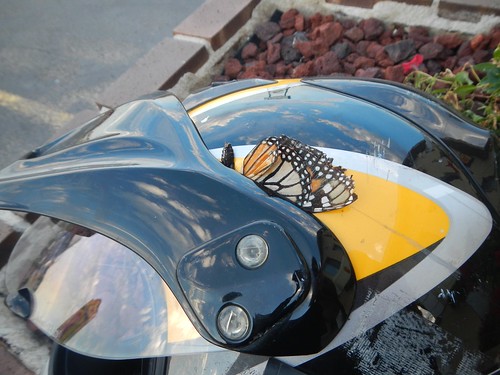