The original plan was to leave Lake Granby, and the rest of the F650.com folks on Sunday, but then we realized that we’d set ourselves up to do 420 miles to the next campsite, just around the corner from Mt. Rushmore.

On the F650s, without dogs, that wouldn’t be a problem, but the Ural is still being inconsistent, and generally tops out aroud sixty even when it’s running well. The dogs slow things down even more.

But, we really didn’t want to leave the guys. We’d barely had any time to hang out, and last night’s hanging had been cut short by the rain and chill wind. We rode into town to have breakfast with the guys at the same spot we’d enjoyed yesterday, and the final decision was made on the way back from breakfast when the Ural wouldn’t exceed 50MPH. (We also heard from several of the guys that they were heading out today, so it would be a diminished crew around the campfire tonight… at least we weren’t the only people who would be cutting out early.)

We hung out for a while, as our rain-fly dried, listening to Ike’s tales, until most everyone has suited up for the day’s rides. We packed at a leisurely pace, said goodbye to the last two, then set out for gas, where we met four more of the band, said more goodbyes, and hit the road to Wyoming. 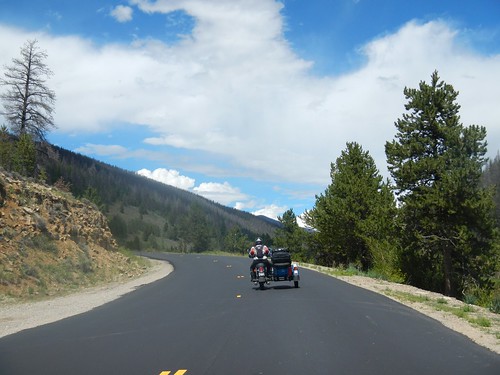 Dachary was a little saddened that we’d had to skip another day of riding for nothing more than the pleasure of it, but the route she’d picked was part of one she’d wanted to do anyway, and it did not disappoint. Maybe half an hour into it I spotted an odd sign on the side of the road: large, green, and pointed towards the side instread of oncoming traffic. What was it?

OMG. I didn’t realize we were crossing it. I called for Dachary to stop. Pictures must be taken. 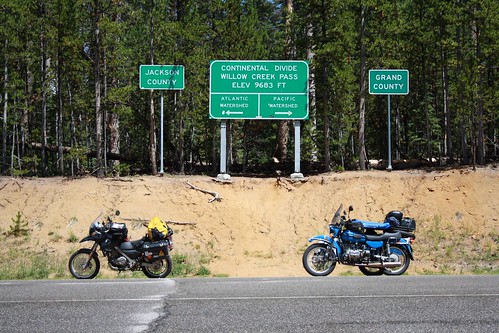 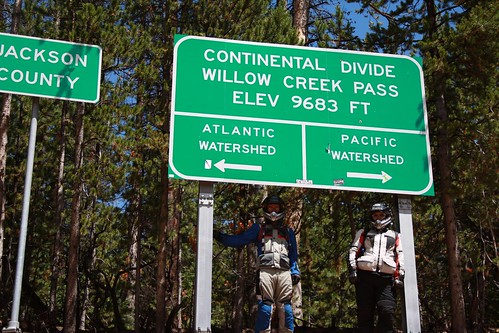 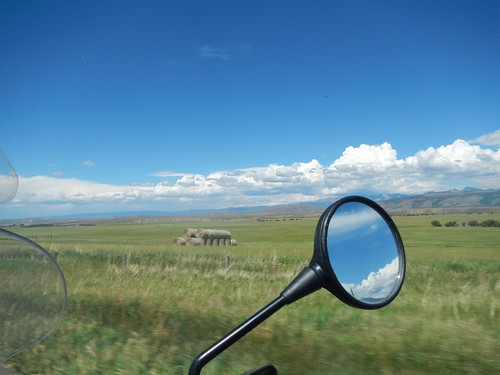 For the most-part, we simply enjoyed riding. No highways, and the Ural decided to hit 70MPH on the straightaway. Dachary checked for a tail-wind, but no, it was all Ural goodness. 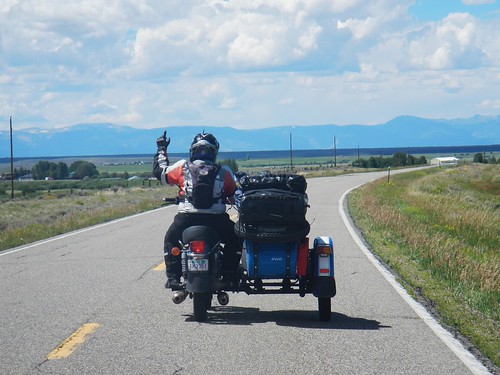 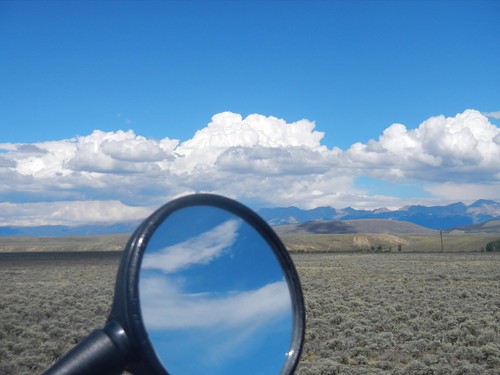 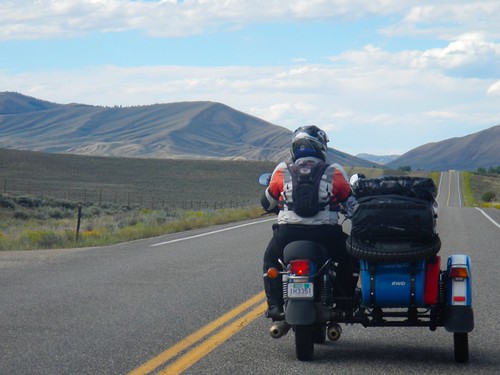 Wyoming surprised us both. My impression, from my last time through, was of a state mostly covered by wide, mostly flat, grassy plains. I was sorely mistaken; different from Colorado, Wyoming presented us with beautiful hills, rolling terrain, and goregeous vistas. 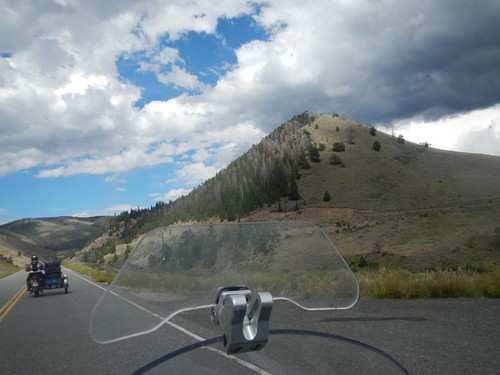 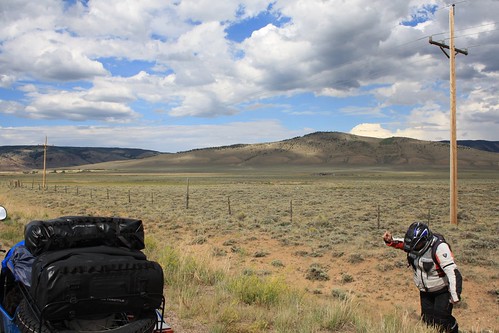 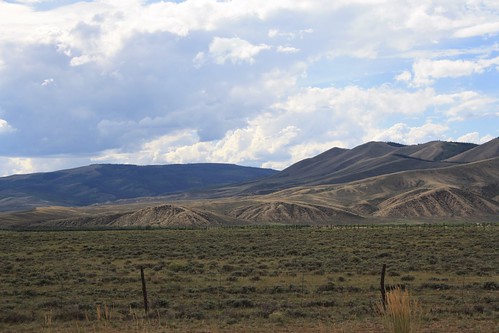 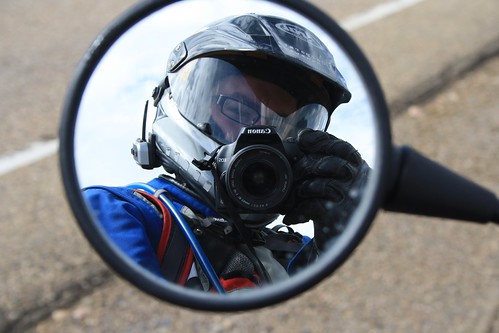 [Dachary’s note]At a gas stop around 3PM, I observed that we should probably have lunch as it was about that time, and I don’t function well when not fed regularly. We asked a local at the gas station who was checking out the Ural where was a good place to eat, and he sent us down the road to a local inn and restaurant. “Just look for the logs.”

The logs turned out to be beautiful wood beams and majestic wood pillars, and the ambiance of the inside of the place was just excellent. The light was great and it felt dark, comfortable and inviting after the bright, hot outdoors. The waitress was nice, and when Kay asked what she recommended, we both got dishes she listed. Kay’s was a steak sandwich with a “cowboy steak” on it – and the steak was delicious. Beautifully cooked and seasoned. The fries were kinda lame, though, but in the end he took the steak off the bread and just ate it by itself. He said it felt like sacrilege to eat it on the bread. I got their country fried steak (called chicken fried steak in other parts of the country, apparently) and was less impressed. But we both still really liked the spot. Score for a local recommendation![End Dachary’s Note]

As we were suiting back up a bicyclist we’d passed earlier came through town with a grin the size of Texas. He just pedaled through, looking around and smiling at everything.

At the end of the day we had a little beautiful drama… would we beat the rain? 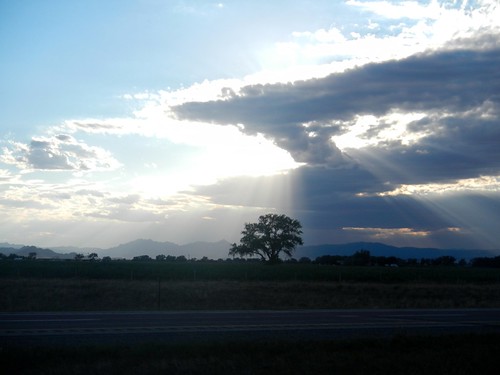 We decided that, being so far behind in our posts, it was best to stop a little early and just grab a hotel with plugs, and Wi-Fi, then spend some time typing, and uploading. We hadn’t accounted for Frontier Days in Cheyenne. When we pulled into the first hotel a group of Harley riders let us know that it was full before I opened the door, and warned us to steer clear of the Wyoming Inn, which had rooms, but they were “gross”.

A helpful lady at the Best Western down the road had just been on the phone with all the local hotels and knew them all to be full except for maybe the All American Inn (back by the first hotel) but its prior owners had a bad reputation, and she warned me to look at the room before taking it.

The All American did have a room, and it wasn’t spectacular, but it didn’t smell weird to my nose, and had a clean bathroom. The door was a bit… sketchy, but we’d already spent 45 minutes hunting hotels at this point and neither of us wanted to drive the 50 miles to the next town.

Unpacked and inside, Dachary, feeling very gross from days without showers, decided to shower twice while I walked to the nearby Arby’s. We ate, had a somewhat stressy discussion regarding the state of the laundry machines, got that going, and sat down to work. It was nearly 10PM at this point, and while we really wanted sleep, and Dachary looked like she was going to fall over at any minute, we set about our jobs.

Our business cards don’t say “Professional Adventurers” for nothing. We really do want to turn this into our full-time gig, and that means not getting behind in the writing.

We both fought with the crappy net connection, Dachary, being a professional writer, set herself on autopilot while I fought with the iPad’s inability to keep up with the hundreds of images we’d taken over the past few days (there are so many we don’t upload). Skip Duplicates on import from cameras had utterly failed, leaving triplacates in places, iPhoto can’t correctly handle the rotation from the Photos app, the photos app has crap tools for organizing albums, no ability to flag photos, and iPhoto can only save edited photos to the “Camera Roll”, and only one at a time, with a complete reload of the entire library after each one.

When all was said and done I’d had to do a magic dance and pray to the gods of interconnectivity to get my messages through. I placed the holy tablet down, and hoped that by morning the 15 photos I’d selected, and tweaked, would have successfully uploaded. It was around 11:30PM, and I was still 2 days behind in images processing, but at least I’d gotten the photo library more organized, and backed it up to the laptop, where I could more quickly prep the next day’s batch.

All day we’d both had happy thoughts about getting clean and making love, but now we were both exhausted, and Dachary was sound asleep. It was a kind-of sad ending to a beautiful day’s ride.