It was a nice day, and we were excited to finally get to our destination: the F650.com 2012 High Country Summit at Lake Granby, Colorado. At the last minute, we’d remembered that two of the people we met on our Americas trip, Eric and Sabrina, lived somewhere in Colorado. A little poking on the internet led us to Eric’s website, so Kay emailed and texted him… and Lo! and Behold! They lived in Denver! Woot! So they were able to meet up for last-minute breakfast, which was awesome. We caught up a bit on how our respective trips had gone, talked travel and motorcycling, and had an all around good time catching up with them. It was so fortuitous that we were able to meet up with them!

After breakfast, we headed up to Unique Rides in Fort Collins to pick up some new head gaskets for the Ural. We wanted to check the valves, but weren’t able to get the cylinder heads open without sticking something in there to pry them off… and we were afraid of screwing up the gaskets so we gave up until we could find replacement gaskets. It also gave us a chance to meet Randy, who had been so helpful in trying to troubleshoot our performance problems over the phone, and potentially talk a little shop. Unfortunately, somewhere in there I was trying to meet up with one of the Ural owners from Denver and we completely missed the connection. That was a bummer.

On the way up to Unique Rides, I wanted to try what Dmitry had suggested about the vented gas cap potentially being a problem, so I tossed my tank bag into the nose of the sidecar with the dogs. And Lo! and Behold! The Ural ran like a dream all the way from downtown Denver up to Fort Collins! It seemed like our problem might actually be the vented gas cap. No missing power suddenly appearing and just as suddenly disappearing – she just ran like a top. It was fantastic. If the Ural always ran like that, it would be a joy to ride.

Got up to Unique Rides and chatted with Randy for a bit. When we shared the idea of the vented gas cap, and our experience driving up with it slightly open, he said he should have thought of that. He’s had scooters in his shop that have had problems with the vented gas caps, and as soon as the gas caps were replaced, problem solved! It was looking more and more like this would be a simple fix and we were thrilled.

Gassed up and got back on the road a little after noon, and took the advice of another Colorado Ural owner about heading up to Estes Park and across Trail Ridge Road. The ride up to Estes Park was really pretty. We were finally getting into the impressive mountains that had been lurking just outside the city, and the pace was nice and easy – just like I like it. It was a bit of work manhandling the Ural through the twisty bits, and I slowed way down to the lower posted speed limit for the narrow, tight turns (unlike when I’m on the F650, when I take turns with confidence and may… occasionally… find a slight discrepancy between my speedo and the posted speed limit. Ahem.) The Ural requires a lot more body english, but I was still in a relatively contained area so the thought of running into a canyon wall or running off a slight embankment didn’t really bother me. 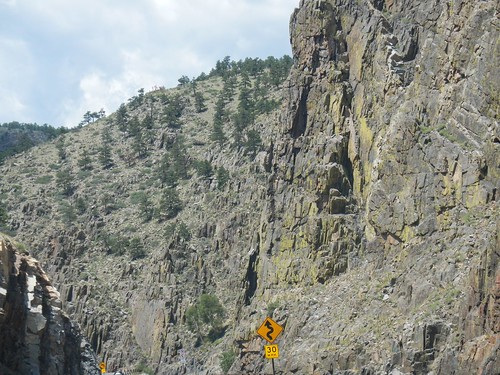 Estes Park is a big tourist town. We’re not big on touristy places, but they do have a lot of amenities. We gassed up there, because the next stretch was going to be through Rocky Mountain National Park with no gas. With the Ural’s gas mileage being so poor, we weren’t sure we’d make it to the next gas unless we topped up – opportunistic gas stops are the order of the day. While we were in town, we grabbed some lunch at KFC, including some chicken fingers for the dogs (which they LOVED, FYI) and had a lot of UDF because all of the tourists were just tickled pink by our dog-mobile. It took a while to get going again.

When we did, though, every moment of this trip was worth it. Because Trail Ridge Road through Rocky Mountain National Park is. Fucking. Gorgeous. 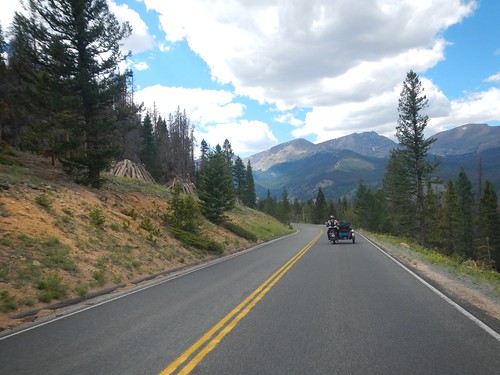 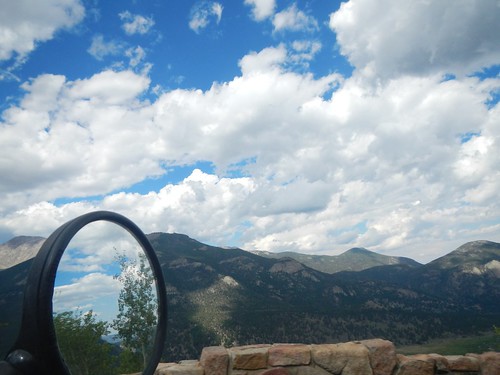 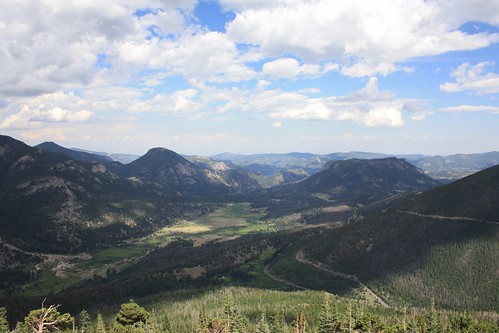 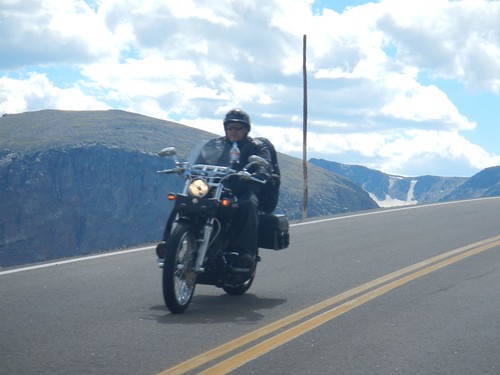 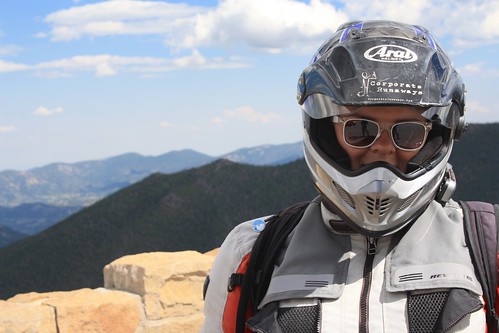 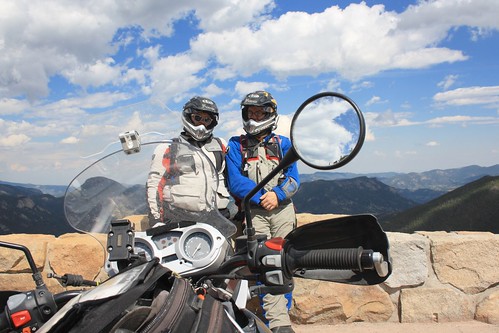 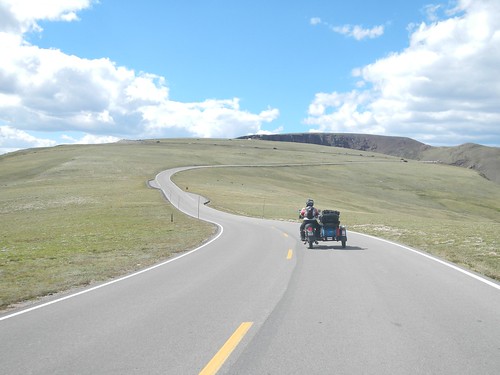 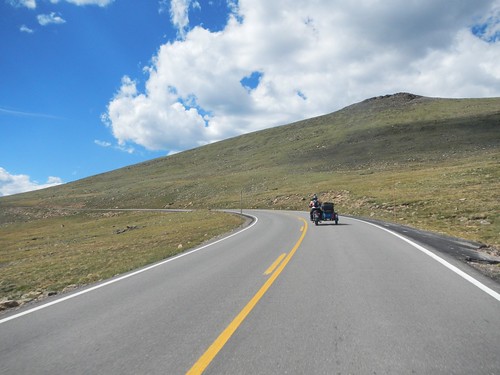 We lost count of the dramatic views and the beautiful mountain vistas. It was simply gorgeous. Words can’t do it justice, so here are some pictures:

If you’ve never been, do it. You won’t regret it.

The highest point on the road is around 12,200 feet. We were still running our regular jets on the Ural, which we’ve discovered have been… modified – so our 122 is probably more like a 125 or 130, and we were running a 42 in the pilot. By the time we got up to 12,200, I could feel it in the Ural. (I could feel it in Estes Park, really… it was starting to be a bit unhappy when idling at that altitude.)

When we reached what I am convinced is the highest stoplight in the world, we had to stop: 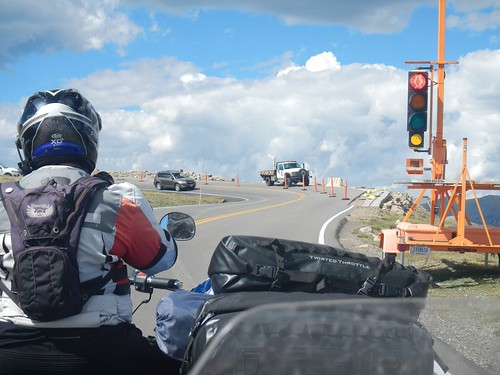 And the Ural really didn’t want to get started again. I turned it off rather than leaving it idling, and when I started it up and gave it some throttle to go, it sputtered and died. I started it again, gave it a lot more gas and really wound it up before I let off the clutch, and we slowly, painfully started pulling forward. After that initial inertia was overcome and we started pulling up the incline again, we had enough power to get over the top, but this was the only time the Ural had come close to showing real displeasure at the altitude. Both Kay and I were impressed at how well the Ural handled it in spite of not changing out the jets. 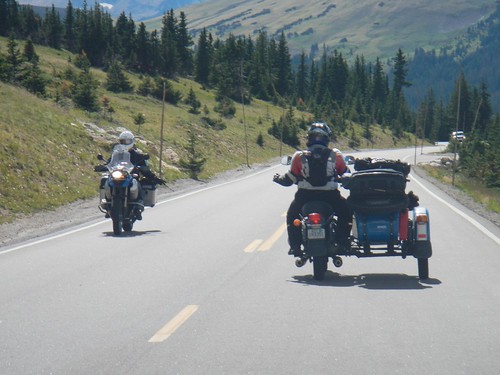 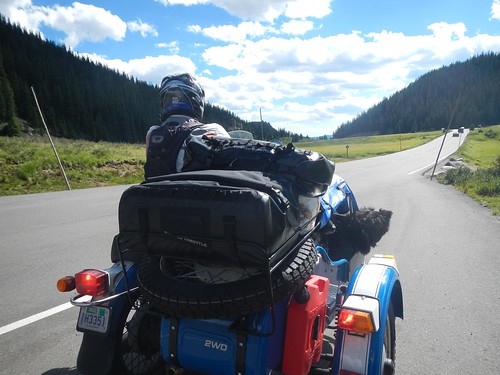 After a couple of absolutely beautiful hours, we made it to Grand Lake, and then Lake Granby! And there was our destination for this trip – Cutthroat Bay Campground for the High Country Summit. Several of the crew were already there, having been out playing in the mountains ahead of time. We found out later that if one of the guys hadn’t showed up early in the day (the campground wasn’t officially ours until 2PM) that we would have been locked out, in spite of having reservations and everything. Luckily, this rather brilliant individual finagled a way for us to get inside, so we were able to drive right in, find a spot and set up camp.

Had a pleasant evening meeting new friends, revisiting guys we’d met last year at the BMW MOA Rally, and finally putting faces to names for some of the folks on the forum. It was really good to be there with everyone and hang out with the guys. This is a great crew. We had an excellent chicken dinner that a couple of the guys went and picked up and brought back to the campground, and then hung out around the campfire, where we received a visit from a local deputy because our flames were too high, to which one of the guys responded: “How else are you supposed to sacrifice the virgins?” or something along those lines. The deputy had a pleasant chat, and we all had a nice visit around the campfire, including a motorcycling rite of passage only extended to a select few. We were honored to be included.

The dogs were torn on this whole group camping thing. After warnings all around “not to pet the dogs – especially the black one” our canines settled into an uneasy truce. Although Ben still got all barky when people got too close. I tried to keep a close eye on him to keep him from getting overly riled up, but one of the guys was a dog person and his own dog had been ill recently, so he patiently fed my skittish dog a steady stream of treats until he was able to come over and pet him without being barked away. But one of the other guys came too close while we were sitting by the campfire and Ben surprised him with a very vigorous bark. We’ve really gotta work with these guys more to get them to be friendlier to strangers if we’re gonna take them on moto trips frequently, because people get a kick out of them and many people want to greet them. 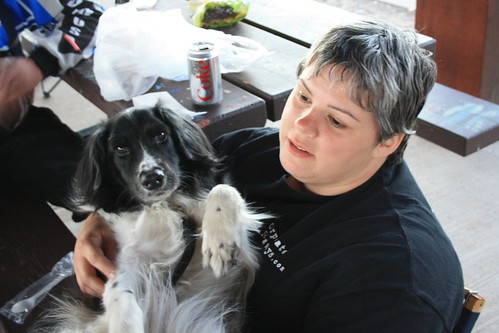