The day started with a bit of extra sleep and some decent complimentary hotel breakfast of eggs, sausage, biscuits, and gravy. When I went out to walk the dogs it was eighty-something, but there was a cool moisture in the air. It was nice, almost refreshing.

We got on the road at 8:30, somewhat later than usual, but we needed the sleep, and the food. It was 11:30 at our second gas stop, but it had a Wendy’s and I invoked the rule about having to stop and eat if it was even remotely close to meal-time. Unlike Latin America it wasn’t an issue of there not being food at meal-time, it was an issue of eating gas-station food at meal time if we skipped this. 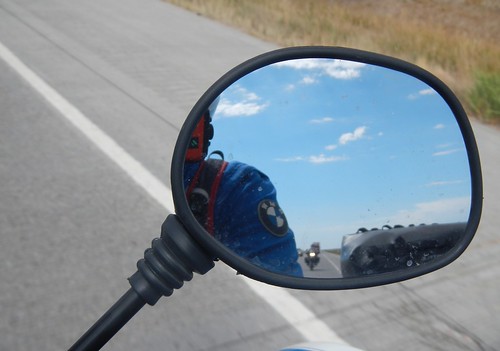 I went in to order for us, and just as I was approaching the counter everything seemed to break down. A senior citizen at the drive through didn’t get his dollar off and demanded it, which involved taking over the one terminal, canceling out a past order, crediting it, creating a new one, telling the kitchen not to make one. Then a man came back with an order that was wrong, and when asked which sandwich was wrong didn’t know, so the manager proceeded to open one of the sandwiches, stick her finger in it to peel it open and see, decide it was the one that was right, grab the other one, throw it out, tell the kitchen to make a new one of the right thing, bring that back, drop it off start to turn around only to hear the man say “I don’t want that one.”, pointing to the one she’d peeled open “It’s had your fingers all over it.” As she wasn’t a cook, and had been handling money, I can’t really blame the guy.

While these things were all going awry Dachary was outside with the dogs wondering what had happened. She contemplated the possibility that the restaurant had been held hostage, until a woman walked out. She also considered that I may have keeled over with a heart attack. But, eventually I returned with food in hand.

On the road again we saw the most literal implementation of “scattered showers” you could imagine. There were three clouds with maybe one acre areas of rain falling down, but the really cool part was that the rain fell straight down about a thousand feet (I’m guessing here. It’s so hard to judge scale with clouds) and then turned at an abrupt 45° angle. We’ve got some pictures of that effect, but they really don’t do it justice. 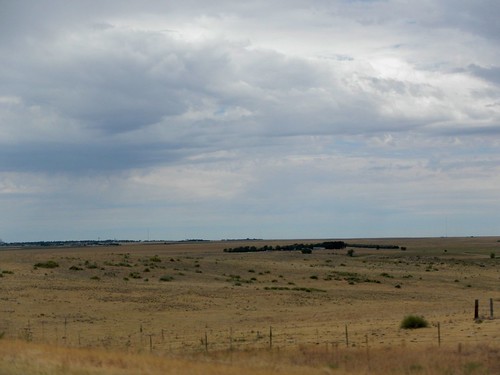 This one is just some of the other showers.

At some point along the way the Ural decided that 55 was just too fast. 50 was the speed it would go, as we past a constant stream of “Speed Limit 75” signs. “Ahh, you say. Your carbs are running too rich for 4,000 feet.” But no, we’ve got the right jets in. And, after an hour of fifty, I magically got 65… for about 3 minutes. Then back to 50. Everything was passing me. 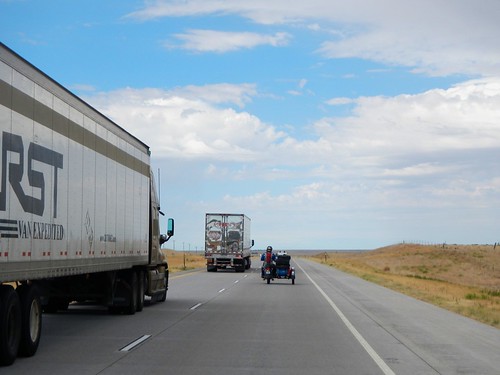 Eventually we crossed into Colorado, and it kind-of rocked, because the whole way we’ve been telling people that we’re headed to “Colorado” and now, here we are. 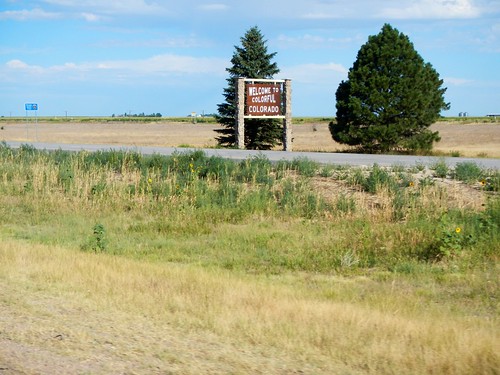 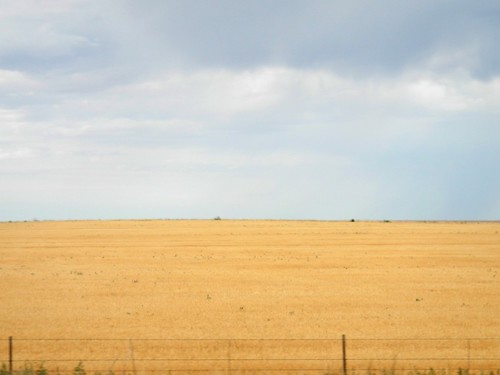 Dachary was thrilled when we finally saw the Rockies. But this was almost immediately after I fell asleep for a moment while riding so I wasn’t able to fully share in the moment and totally forgot to take a picture. The Ural seemed to get excited about the Rockies too and decided to give us 65, and more, until we exited the freeway and came up to the land of stop lights.

A few stoplights in and Dachary’s noticed a Starbucks next to a gas station. She was craving, and I wasn’t complaining. We stopped, and took the opportunity to call Unique Rides (the Ural dealer here in CO). Randy wasn’t able to get us in to look at the bike (booked solid) but took a good amount of time to go over a long mental checklist of the things it could be and the things to check. Sadly, we’d checked them all. He also suggested that the stock jets were what was appropriate for this altitude, but suggested that maybe the original dealer had drilled the stock jets out to make it run better at sea-level.

The one thing Randy suggested that we hadn’t tried yet was to run it in prime for at least a minute when it was showing poor performance. Dachary had tried that before, but hadn’t left it in that position long enough. He suggested that it would take about a minute before you would start to notice an effect, if any.

Ural of New England didn’t sound like a tweaking kind-of place, but then again, it really didn’t feel like it was running lean back home. So, we called up Dmitry to see if he had any ideas too, and to check on the jets. Turns out they do adjust the jets. The basic tale, as we understand it (not coming from Dmitry) is that dealer’s aren’t allowed to change the jets from what it was rated for with whoever tests emissions for a vehicle when it comes onto the market. They can tweak the jet itself, but not replace it, a loophole that works well for people at different altitudes than the thing was set up for at the factory. Plus, we think IMZ-Ural intentionally runs them lean to make them test better on emissions.

Anyway, Dmitry had a couple good ideas too. He suggested that the gas cap might be sealing incorrectly and creating something of a vacuum which results in gas starvation. He thought there also might be an issue with some piece of grit in the carb, but he seemed less confident in that suggestion. He agreed that the gas mileage we’ve been getting was poor and thinks that it might be a symptom of whatever’s going on. His actionable suggestions were to unscrew the gas-cap enough to break the seal when we get below half a tank and see if it has an effect. Also, to pull over when it’s running poorly again and listen to the idle. We should report back if it is rough or not. I’m pretty sure it’s not since we have pulled over for gas when it was running badly and I don’t remember any rough idling, but I wasn’t specifically listening for it either.

He suggested that if the gas cap was the issue we’d likely hear a whooshing intake of air when we opened the cap. We hadn’t been hearing that either, but we also wear ear-plugs under our helmet and hadn’t specifically been listening for it. Sadly, at the next fill-up I didn’t think to take off the helmet and ear-plugs first, so I can’t say if it’s sucking in air upon opening or not, but it was also running better at that point too so… We’ll have to wait and see what tomorrow brings.

Major props to both of these guys for taking the time to brainstorm the problem with us.

As for Denver… I really don’t like it, or Aurora. The place has no personality. It feels like a bunch of streets with a haphazard assortment random crap on them. We made our way to Performance Cycle of Denver, who I’d called yesterday to see if they had a Cardo Scala Rider G9.

Just to confirm that it wasn’t early-onset-oldness we’d switched helmets when we started out in the morning. I was quite relieved / satisfied to hear a somewhat constast stream of “What?” “Yeah, I didn’t get that.” “Huh?” “Say that again?” and “Yeah, I can’t understand you.” coming from Dachary. At the same time, it kinda sucked. We switched back at the next stop. Here cheek pads are a bit wider after 30,000+ miles in that helmet and the little bit of extra room was kind-of wigging me out. Plus, she wanted her good headset back. ;)

Performance cycle is huge, and has almost nothing we want. It was kind-of weird to walk into a motorcycle store and really not care about anything they had. When we walked into Revzilla’s showroom I was all “ooh” and “ahh” and “that’s nice.” and “I wouldn’t mind having that.” Not that I needed any of it, but still.

One quick purchase later and we were back on the bikes and heading to the hotel in the heart of Denver. Why, you ask, are we staying at a hotel in downtown Denver? Why would we even go to downtown Denver? Because my little brother lives just down the road and I haven’t seen him in about 15 years. So, we’re going to get together with him and his wife (who I only just found out about).

The hotel is the worst of the trip, but the dinner with my brother was great. It was really good to reconnect with him.

I’d insert a picture here but there were only three taken after dinner, each is screwed up in one way or another and we were interrupted from taking more by a pan-handler who didn’t understand the concept of no and decided to tell us a story about a monkey (with it’s balls in the sand) a lion who kicked its ass, an elephant who kicked it’s ass, and some complicated series of events involving the monkey pulling its balls from the sand, fighting the half-dead lion who picked a fight with it, and… things I didn’t really understand.

This was probably the fifth person begging money in the past seven minutes and maybe the tenth of the night. There was, of course another one, on the way back to the hotel, but it was only a half-assed walk-by begging from a guy who looked like he really didn’t need to be bumming money off of people. My first thought was that we must be the only white people around, but that thought was immediately followed by the fact that we were in denver, and while there were a lot of non-white folk there were at least as many white folk running around. A quick glance down the street confirmed this.

Anyway it was good to see my brother, but it’s late now, and we’re damn tired, and seriously lacking in the sleep department. Goodnight Folks.

The view from our hotel room: 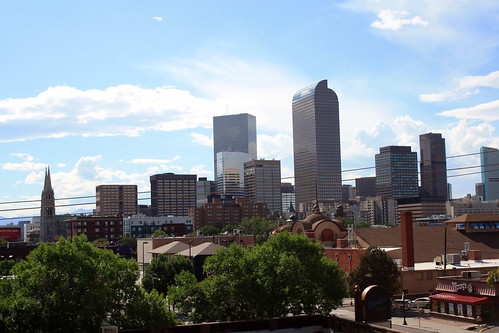 The view from our hotel room when you look down: 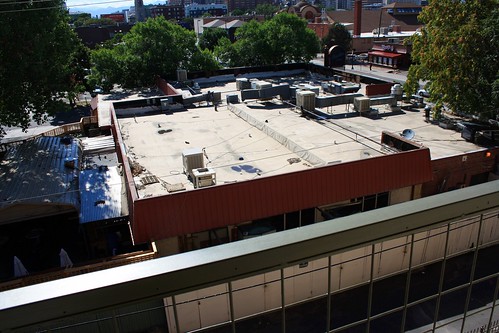 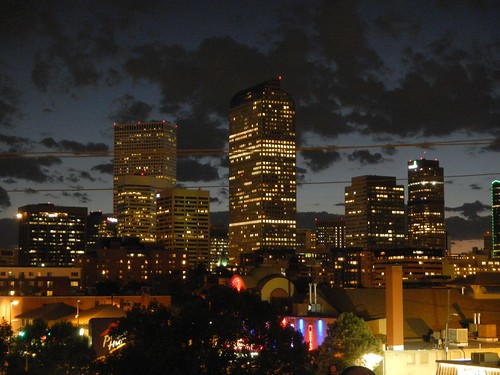