With things dried we packed up and made the first decision of the day: where to have breakfast. Neither of us wanted McDonalds, and there was a Perkins just across the way. Dachary claims this is “kind of like a Denny’s” which sounded much better than McDonalds to both of us, but at the same time we needed to make miles fast today so that we’d have time to spend with Dachary’s family tonight. So, McDonalds it was.

On the road Dachary (we switch off who drives which vehicle every day) discovered something I’d discovered the previous day. The Ural had magically acquired some more horsepower. We didn’t know from where, or why, but it had more “get-up-and-go” than it used to. She was so happy about it that, combined with an ear-worm of Michael Jackson’s Wanna be Startin’ Somethin’ had here literally dancing on her seat. 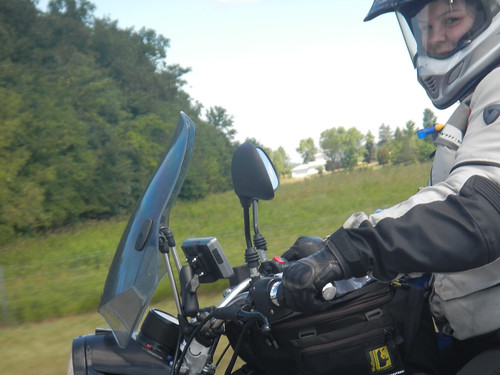 Unfortunately, it was too good to be true. After one of our many gas-stops the extra power disappeared and took a little of the other power with it. At our lunch stop (another McDonalds …ugh) she purchased some “octane booster” to test the theory that maybe it was some poor gas from the last place. It wasn’t….

At some point the power came back, then left, then came back again, then left… and back… and…. 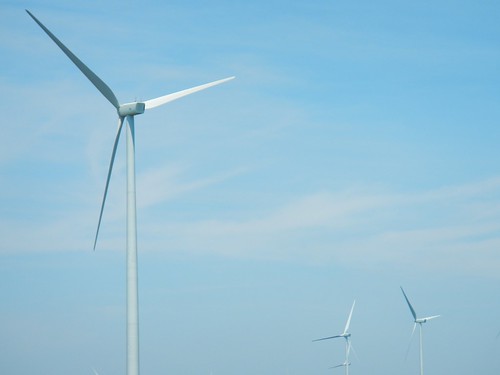 Meanwhile my headset was following a similar pattern. I was thrilled that in the early day it worked perfectly, and then half-way through it shut itself off. Turn it on, it shuts off. After a few times of that it stayed on for hours to the dismay of both of us. But, then it started shutting off quite quickly. 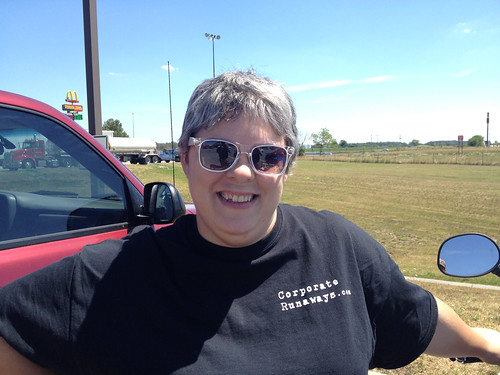 At lunch we had a classic example of street-dog thinking vs city dog thinking. 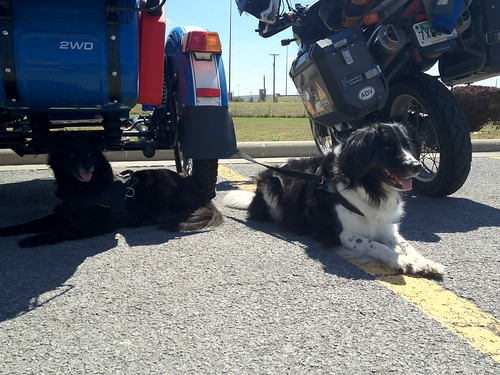 Dachary decided to buy herself a pair of dorky sunglasses to compliment mine, and oblige the request from others for a picture of my new dorky haircut and cop-style clip-on shades. As you can tell from the sticker they’re polarized, as is the vizor on our helmets, which means they combine to look like a 2D movie viewed through 3D glasses. Each eye was seeing slightly different colors, and it made my brain not happy. But… at least the world wasn’t as blindingly bright. 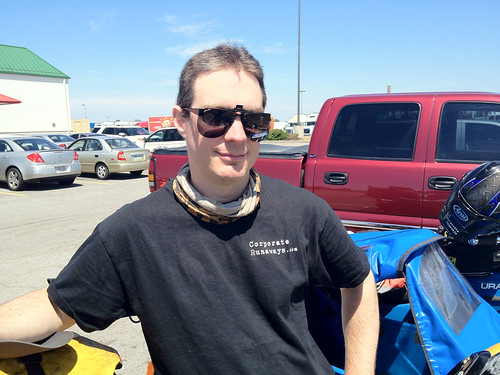 Whilst modeling our glasses, ben managed to catch a butterfly. We’re still not sure how he managed that.

Just before reaching our destination, we spotted a large Harley sign. Harley riders use headsets all the time… We couldn’t talk, but we had the same thought, and pulled in.

No headsets. Four hundred thousand pieces of clothing and chrome plated doo-dads though… At least they had a bathroom.

Back in the parking lot Dachary decided to consult the internet for any other nearby motorcycle dealers who might not be closed yet on a Saturday, or who might have some sliver of a chance of being open on Sunday, because gods forbid the sellers of luxury items should every try and be open when their customers have time to visit them… end rant.

Anyway. Everyone was either closed or didn’t have any in stock.

We took off, and Dachary noticed I’d neglected to clip in ’Dido’s harness. Eep! The headsets happened to be on at that moment, so she told me and we pulled over, clipped `Dido in, while Dachary ran inside to pee at the gas station we’d just pulled over at, called her Grandpa to let him know we were 40 minutes outside of town, and he said they’d meet us at the hotel.

Ten minutes after we’d gotten stuff off the bike and we were surrounded by family. Dachary’s Grandpa (who raised her), his girlfriend, her uncle, aunt, and her youngest sister all showed up. There was talk of the bikes, travel, drawing, and family.

Towards the end we mentioned the problems with the headsets and Dachary’s uncle offered to take a look, having had a background in similar electronics, and had the wee little torx wrenches required to open the thing. He admitted that a bluetooth radio was somewhat dissimilar to what he was used to, but we figured it’s already broken, out of warranty, and we plan on getting a new one, so he can’t hurt it worse. 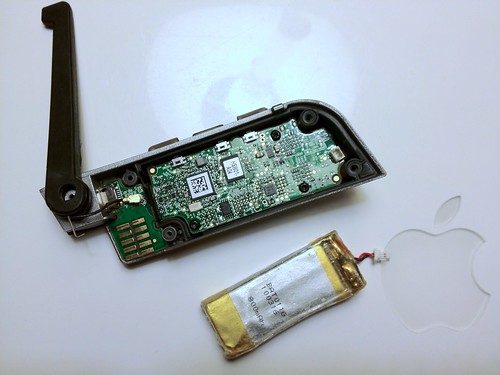 End result, we think there’s a decent chance it’s just the battery which he says he saw online for about $5. Buy a new battery, shove it in, and we’ll either have a working spare or we’ll be out $5. Worth a try. In the meantime, we’ve put it back together and will have to make-do until Tuesday, which is the earliest any motorcycle shop seems to be open and also the earliest we can get on shipped somewhere, although we’ve no clue where since the only person we have to ship something to is my little brother in Denver.

On his way out to poke at that we swung by the bike to check the final drive oil level, because we hadn’t checked it since we left. Why does gear oil have to smell so nasty? Even though we’d changed it just before leaving with a nice pink fluid it now looks just as dark and nasty as it smells, and the level had fallen to just below the lower line, but the gear box was also cool so, I’m not sure. I gave it a wee bit more, knowing that it would just weep out the top if there was too much, but we’re going to have to change that soon… of course, it’s a Ural so you’re going to have to change all the fluids soon, because the maintenance intervals are so close.

I also checked the spark plugs, which looked ok to me. Everyone’s alway told me you want a nice mocha coloring. Dachary says that’s either changing, or it’s different on the Ural and you want closer to clean metal. I don’t remember. Either way, I changed them out because the programmer in me demands the removal of variables when debugging a problem, and the web poster in me knows there will be a contingent of folks going “It’s the spark plugs!” if I don’t, and changing them will make you guys happy too. Plus if we’re wrong about it not being the spark plugs then we’ve just fixed the problem. I don’t mind being proven wrong, especially when it fixes things. ;)

Also, here’s a picture (of poor quality, sorry) so that you guys can debate their color, because I know some of you are going to want to. 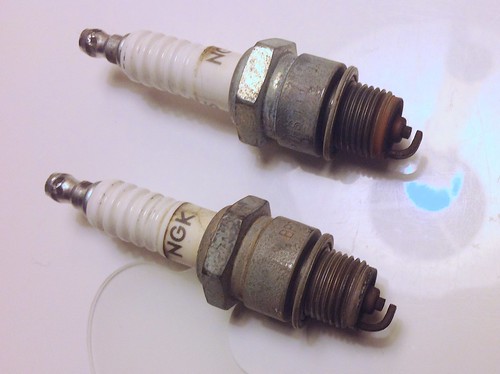 It was great to finally meet her family. Her grandpa told me to be sure and take care of her and “keep her out of trouble”. I kinda chuckled at that one, as there’s little chance of that.

On that note dear friends, I bid you a fond goodnight. It’s way too late to be typing this stuff and Dachary’s sound asleep.

… half an hour later and I’m still trying to get the images uploaded. Maybe they’ll be done in the morning. 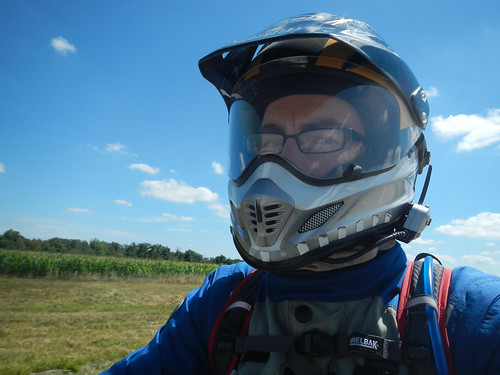