We showed up at Continental Cargo Terminal (122 Harborside Drive, East Boston) at around 8:15ish and showed them the air waybills we had from Buenos Aires. They charged us $35 per bike in some sort of processing fee, and gave us the actual air waybills with a sticker that we’d need to have customs sign off on our bike. Kicker is, customs in in South Boston. So we took a cab from the airport to 88 Black Falcon Drive, Suite 240 in South Boston – Customs and Border Security or something like that.

Got to the window at 8:58AM, rang the bell, and waited. Shortly after 9am a friendly gent walked over and took our forms, we explained that we were picking up our motorcycles that we’d had shipped home from South America, he confirmed (verbally) that they were owned by us before we left the country, and they were currently registered to us, and then he signed off on the forms. Done. Spent longer chatting with the guy than doing the paperwork. He didn’t ask to see our passports or anything (although the form on the wall said we need to show them and we had them out with our forms) or the bike registration, but I’m not sure if that’s standard operating procedure.

Another cab back to East Boston to the cargo terminal, and we showed the ladies at the desk our signed paperwork. They seemed surprised by how fast we returned. They took our paperwork, made copies, did some other stuff and then handed the paperwork back to us. Then they told us to come on through to the warehouse and they had one of the guys grab the pallets with the forklift and bring them over. We made short work of the shrink-wrap (with some help from the warehouse guys) and a couple of ladies from the desk plus the warehouse guys stood around to help us unpack and re-assemble the bikes.

Kay’s front wheel didn’t go the most smoothly because he had the guys put it on the centerstand before he got the wheel ready to go back on. So I’m standing there hanging over the back of the bike trying to weigh it down enough to stay on the center stand instead of just falling forward onto the engine. Eventually he gets everything lined up, gets the axle back through the wheel, etc. Only small problem – a brake pad fell out of the caliper while he was putting the wheel back on. I asked him to just put the wheel back on anyway – we could easily take the caliper off to deal with the brake pad later but I was getting tired of weighing down the bike.

Things went quickly after that. I held his fairing up while he reconnected his battery. We realized we’d forgot to bring tire pressure gauges to put more air in the tires, so we just guestimated. We put his mirrors back on and left the windscreen off, then moved on to my bike.

Putting the wheel back on my bike went more smoothly because I made sure to get everything ready before I had them put the bike on the center stand. Even so, one of the warehouse guys took the allen wrench from me to take the axle out of the wheel and wouldn’t let me have it back – he just had to do it. I let him, and got the front tire back on with very little fuss. Didn’t bother with the mirrors, battery or the windscreen because I didn’t intend to ride it – I knew it was dead so I was just gonna have it towed.

Right as we were wrapping up, a guy with a truck that had a little lift thing on it was just about to pull away. This was perfect timing, as the cargo terminal had no ramp and no way for us to easily get the bikes down out of the warehouse. So the guy with the box truck let us pull our bikes onto the truck, pulled away from the warehouse, and used his lift to get the bikes down onto the ground. He was super helpful and I gave him a $20 for sparing us a bunch of hassle, but he would have done it for free.

Pulled the bikes out of the way and I made Kay ride his bike down the parking lot and back to make sure it was running smoothly before I’d call a tow truck for mine. His bike was running fine so I knew we’d only need to tow mine, so I called the AMA Roadside Assistance number and asked for a tow. They were very helpful and professional, had me wait while they called a provider, and then gave me the name and number for the place and told me they’d be there in “No longer than 90 minutes.” 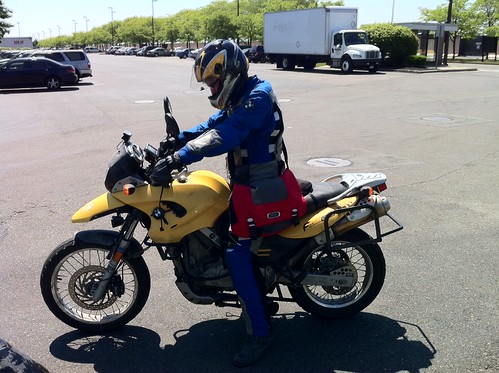 I took the opportunity to reconnect my battery, remove the stupid Aerostich multi meter thing that we’ve both come to loathe, put my mirrors back on and even reinstall my windscreen. That was pretty much everything I needed to do and it only took me 20 minutes or so. More waiting.

After an hour, I’m getting hot, weak and lightheaded. Decide to go get a snack and a soda from the vending machines we saw in the Continental cargo building. Nom my snack, and wait for the 90 minutes to roll around. And then I promptly call the towing place. They say someone will be there in no more than 20 minutes.

The tow guys arrive just after the 20 minute window – with a car hook tow truck kinda thing. Not a flat bed. I ask “They did tell you guys it was a motorcycle, yeah?” They said “Yep” and acted like they knew what they were doing. They then proceeded to run a couple of straps underneath my bike and around the triple tree to hoist it up, and rested it on the metal bar thing that usually goes under a car’s front end. 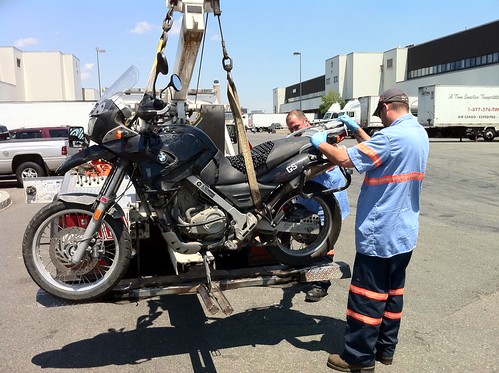 They strapped the wheels down to the bar, put it in gear so it wouldn’t roll and held some part of its weight off the bar with the hoisting straps. And then we all climbed into the cab and took the long way home. 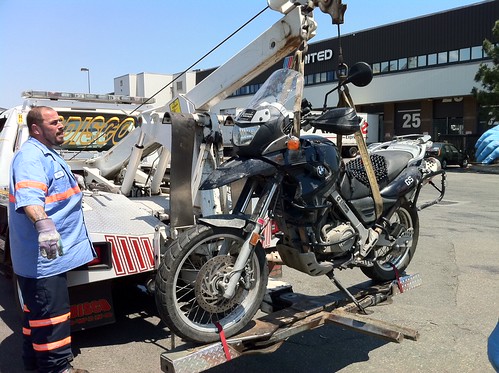 Bike stayed in place and we got to my house intact. They lowered it down and the straps hadn’t visually damaged anything. I’m still boggling that they were able to do it with a car hook-type-setup but they did. 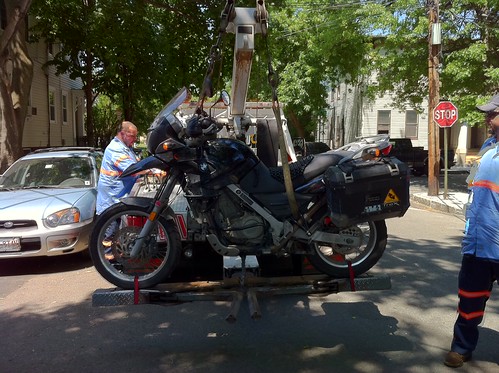 Now my bike is home, Kay’s bike is at work until he rides it home and the trip is truly complete. It’s a very happy feeling to be able to look out my window and see my bike. I feel as if a part of me was missing without the bike there, and now it’s home (even though it’s not working).

Only remaining thing is to call Max BMW and schedule service. We’ll let you guys know what the final service tally is, and what all is wrong with the bikes, since it technically falls under the trip stuff. But that’s pretty much it – the trip is well and truly over.

Catch Us on SideStand Up! Operation: Reclaim the Bikes – Day 3