We thought yesterday would be the hard part – actually getting the bikes to the airport and getting them ready to go out. So today our plan was to chill a bit, do some work in the morning and head over to the office in the afternoon to pay and collect our waybills. Neither of us has gotten as much work done this week as we’d planned, and we’re technically both still working on this trip – I had some deadlines to meet and Kay is technically “working remotely” so he wanted to get some stuff done before we headed out. So we have yummy breakfast in the lobby and then back to the room to work for a few hours.

Around 1PM Argentina time, we get a phone call from Sandra at Dakar Motos. She said the guys from the shipping company have called and they can get our bikes out on an airplane tonight if we go pay them. And Sandra tells us that the bank closes at 3PM, so we have to go soon. Boo! Somehow it hadn’t occurred to us that the bank might close early. But I still had a deadline and a bit more work to do, so I work a bit more and we head out around 1:40PM Argentina time.

Luckily, in addition to being close to where the shuttle from the airport dropped us off, we’re also less than a mile from the downtown shipping office. And most of that way is up the main pedestrian shopping street – Florida. 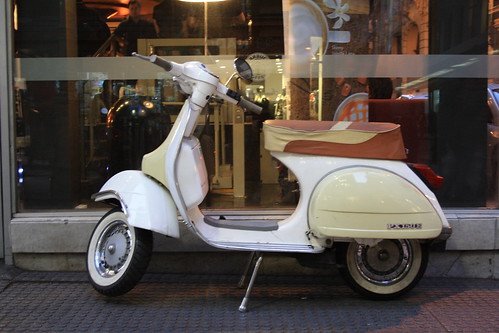 So we head up Florida street, getting annoyed that it’s so crowded and people are walking slowly, and make it to the office shortly before 2PM. We meet with the guy from the shipping company, he shows us the paperwork for each bike, including the cost, and tells us we pay at the bank next door and then return to the 7th floor where we can pick up our air way bills. The bikes will go out tonight to Houston, tomorrow to Newark, and then they’ll arrive in Boston on Sunday. That’s when we’re getting home, too!

We look at the dollar amount for each bike: $1,350.36. Sandra’s original quote to us was $1,880 per bike, which included her $100 fee per bike, so her original shipping estimate was $1,780 per bike. We managed to save $430 per bike by removing the windscreen, mirrors and front wheel! Woot! Saving $960 was definitely worth the extra hour or two we spent at the shipping place making the bikes ready.

So we take our paperwork next door, and try to figure out WTF to do at the bank. It’s not self-evident. When you first walk in, you see an open space on the right with three desks. Then there’s a space with a couple of cubes, where presumably the managers sit. If you walk toward the back of the bank, past the cubes, there’s an area that might contain bank tellers, but there are these really tall partitions (like at least 10 feet high) blocking your view – I assume for the privacy of the people who are conducting business. And there are a ton of people milling around.

Eventually, we see a monitor that is displaying numbers, and occasionally there’s a beep and the numbers change. We recognize the system as being similar to the RMV back home, so there must be someplace we can take a number. I pull out my iPhone to look up the word for “deposit” in Ultralingua, and the security guard points to my phone and then to a sign behind me that says you can’t use cell phones. I try to explain that it’s not a phone, but I’m trying to use it for a dictionary, but he wags his finger at me again. Luckily, I continued looking up the word whilst trying to convey to him that it’s ok – it’s not a phone – so we ask him where to go to make a deposit, and show him the word on the phone in case we’re mispronouncing it. He gets even more adamant that I have to put the phone away, and tells us to stand where we are.

Boo. This didn’t seem to help. We wander up toward the front of the bank again and I see a couple of little kiosk things that I think might dispense tickets. We figure out we need to press the “Non Clientes – Deposito” button and it spits out a ticket that says D069. Ok. We look up at the monitor just as they’re calling D044. No biggie. We’ll just wait our turn. The ticket has the time on it, and we got our ticket at 2:14PM. Bank closes at 3PM. Surely we’ll get through it before too long.

When we get to the bank, they’re calling B125 interspersed with the occasional D044, etc. After nearly an hour of waiting, when the bank closes at 3PM, they’ve gotten to something like B144 and D049. They’ve only called 5 D numbers in the hour, and we’re D069 – 20 more D numbers to go before they get to us. But they seem to call them so infrequently!

Kay’s note: we’ve pulled out our kindles and now every time the bell dings our heads pop up to look at the screen to see what number has been called in an almost literally Pavlovian response.

We wait more. And more. No-one else is allowed to come in since the bank has closed, and eventually the crowd of people around the teller windows thins out. Close to 4PM, we move back to that group since it’s clear we’ll need to go to a teller line. After all of the B numbers have been called, apparently (they’re well past B160 at this point) they go back to calling D numbers, and eventually they get to us. We run up to the teller, as many people have left without making their transaction so they’re only giving people like two seconds to get up to the window before switching to the next number. We explain that we need to make a deposit to the account number on our paper, we hand over our cash and we get a deposit slip back. A couple times whilst waiting in line, I asked Kay if he thought we should make separate deposits for each bike, and he said he didn’t think there was a point. I think he said something like “once the money’s in their account, what are they going to do – give it back to us and tell us to make two separate deposits instead?” So we made a deposit of $2,701 to ship the two bikes (they wouldn’t take the exact change, even though we had it – I guess they didn’t want US coins).

So after two hours of sitting around in the bank, we take our deposit slip back to the building next door where we go up to the 7th floor to collect our waybills. We present our papers and the deposit slip, the guy pokes at a computer, asks us who’s who, and after 5 minutes or so, asks us to have a seat. We sit. And wait. And wait some more. I notice before we sit down that there’s a bit of confusion over the one deposit slip and the two bikes, and he takes the deposit slip to two different people and talks to them. So maybe we should have made two deposits after all. I wonder if the sitting and waiting is a result of the one deposit slip, or if it just takes them that long to get the paperwork together.

Eventually he does call us back to the window again, has us sign some paperwork and write our passport numbers on it, and then hands us each a paper-clipped stack of paperwork. This is it! These are our waybills! All done! We just take this paperwork to the cargo terminal in Boston and we’ll get our bikes back.

As usual, the process took longer than we expected. We weren’t counting on the 2 hours at the bank to make the deposit, and we’re glad that Sandra warned us that the bank closes at 3PM. We’re also not sure why we had to sit around for so long waiting for the waybill at the end. But now our bikes are officially on their way back to Boston! We’re still here until Saturday, so we have the next couple of days to work, sit around and play tourist. We arrived on Monday, were done with the shipping process by Wednesday and have the rest of the week to do whatever. Sandra told us we needed a minimum of 4 days in case there were problems, but obviously we could have gotten by with 2. Oh well. The bikes are coming home!

Kay’s note: Sandra mentioned that she has had problems crop up with other bikes in the past, so while there’s a strong probability it’ll only take two days you really don’t want to risk it.