Our swanky gay hotel included a breakfast buffet, but being Argentina, we were expecting a lame breadfast. We were quite pleased to find, when we went down to grab a quick meal, that it’s actually a huge spread, including many non-bread items – scrambled eggs, “bacon,” these weird sausage things, lunchmeat, fruit, cereal, yogurt and several types of bread. We enjoy our tasty non-breadfast, go back to the room, make sure we’ve got all the papers and I suit up. Dachary’s stressing about the time. I’m not, but that’s only because I don’t actually know what time it is.

I extricate the bike from the parking garage next door, and stumble upon a new technique (for me) to navigate city traffic in Latin America.

Dachary, meanwhile, hailed a cab, and beat me by a minute or two. I guess I spent too much time at the garage talking to the local and putting on my helmet and gloves.

It’s about 9:32 when we arrive and the tow truck guy was supposed to be there at 9:30. Dachary proceeds to stress, and we come to the conclusion that it’s stressy because we are now totally dependent upon other people: the tow guy, the shipping company, customs… Also, she feels like she’s let Nargo down because she didn’t disconnect the battery before storing her. I still think there’s something more wrong with her than just the battery. Someone on ADVRider suggests that it’s a combo of a dead battery and a borked alternator. That sounds plausible to me, although I thought these had a stator, not an alternator.

We don’t do well when we’re at the mercy of others. We’re cool with customs. We treat them like gods because they have the power of them. But, they’re generally inclined to do what you want (let you pass) and we don’t feel dependent on them in the way we do here. Tow guy, crating guys, shipping company, customs agents who have to deal with TSA bullshit because it’s going to the US, no real idea when it will go out, or what it will cost….

10:00 comes by and no tow guy. I go across the street to the hair dressers to borrow their phone and call Sandra. Tow guy’s stuck in traffic. He would have called us, but we’ve got no cell phone that works here. He shows up a couple minutes later but it turns out he’s spent two hours in traffic trying to get to us. Sandra chose well though. He’s a really nice guy who’d helped her out before. She was concerned we’d be all picky about price. I told her “we need to get it towed and we’re willing to pay whatever it costs to do that as long as it’s not unreasonable.” “But what’s reasonable?” she asked. “I don’t know. I have no idea what it costs to tow a bike here. Whatever you think is decent.” In the end it was $380 Argentine pesos, or just under $100 US for him to sit for two hours in traffic and then drive us like 40 kilometers to the airport. 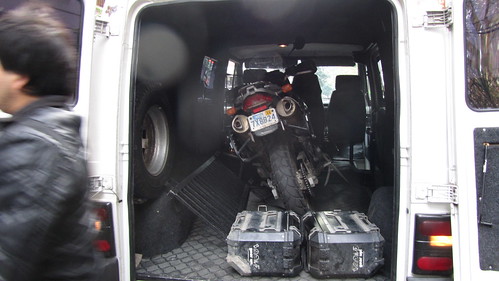 After we get to the airport, and get someone to come and give us permission to go through the gate, we offload the bikes, weight them, remove the windshields and mirrors, and wait for them to move shit so they can get the pallets out. We roll my bike onto a palette and start to remove… the… front….axel… Damn this is hard…. After like fifteen minutes of straining with it Dachary says “did you undo the other screw?” meaning the one that clamps the axel in place. No. No I did not. Unscrew Unscrew. Axel practically spins out. “Why didn’t you say that earlier?!”

The guy who’s been helping us suggest that “It’s ok. It’s your first time right?” “No. It’s not my first time. I’m just stupid.” 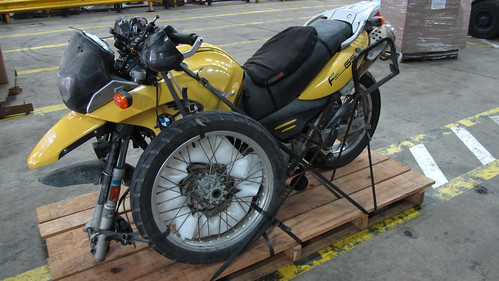 We remove the wheel, drop the front end, carefully, to the palette and strap it down. Dachary’s bike goes much faster as a result of undoing the “other screw” first.

Then we wait for customs to come inspect them. Helper guy wanders off for lunch. We’re still waiting when he gets back but he’s brought us each a ham and cheese sandwich! Awesome! Thank you helper guy whose name starts with an “M”. (Dachary’s note: it was Martin, and he was lovely. Had a good sense of humor, we chatted a bit about the bikes whilst strapping them down to the pallets and he was amused but in a friendly way at Kay’s mishap with the axle. And it was so nice of him to bring us a ham sandwich!)

Customs comes, glances at them, makes sure the VIN is right, and doesn’t bother checking the contents of the panniers. Don’t worry, we didn’t bother trying to ship any explosives this time… well, beyond the limited gas in the tanks. (Dachary’s note: Sandra had warned us that they’ve gotten quite picky about what you can ship in the panniers these days, and it can only be stuff related to the bikes. I.e. spare parts, tools, etc. She said we can’t ship clothes, riding gear or camping gear in the panniers. So we’d emptied all of our spare camping and riding stuff out of the panniers, and only had bike-related stuff in it. Which means we’ll probably need to buy another bag for carrying stuff on the plain. Now I’m marginally annoyed that we didn’t just leave the stuff in the panniers, since they didn’t bother checking them. I also removed the locks in case the TSA or customs in the U.S. feels the need to inspect them before putting them on a connecting flight – my panniers won’t latch without locking them, unless you remove the locks entirely, and I didn’t see any way they could break the locks without breaking the panniers – so I just removed the locks. They’re shrink-wrapping the bikes and panniers anyway, so someone can’t just casually open them and grab stuff – but still.)

Then we’re done. But, we haven’t signed anything, and compared to other border crossings we feel that something’s missing. So we chill and watch helper guy saran wrap the bikes. Yay. 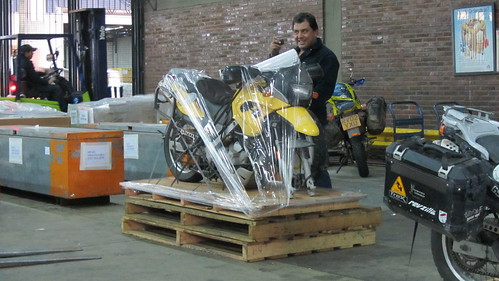 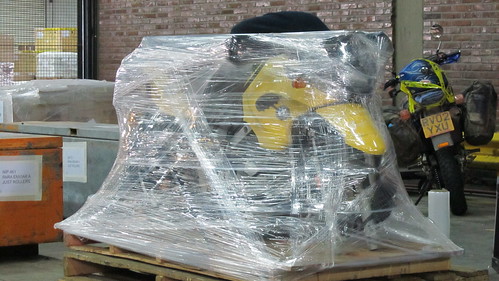 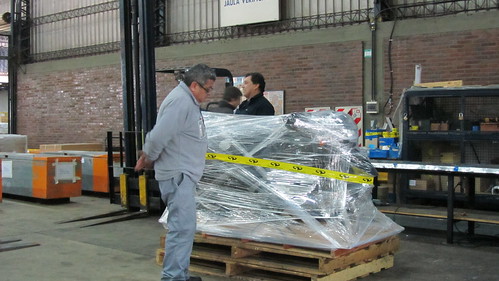 Then, we confirm that yes, we’re good to go. No, no-one needs our signatures. Ok. Where’s the mini-bus? Someone leads us to a room filled with tables covered with briefcases and people on cell phones. Shipping agents we assume. A bus will come in five minutes we’re told.

Five minutes later we’re following a man with a large orange bag out to the road where a mini-bus promptly picks us up and takes us to town for 18 pesos each. Instead of the 600 the first cabbie wanted. We know the bus is going to BA, somewhere downtown, but *where* downtown we have no clue. The other two people get off along the way. So at the end it’s just us and a driver going… who knows where. “Hey wait. We just passed the street our hotel is on!” I start to get up to tell the guy we’ll get off here but he’s already pulling over. The final stop is three blocks away from the hotel!

We have *so* landed on our feet.

We stop to acquire a sandwich on the way back because at this point it’s 3:00 PM and we’re still hungry. The man at the counter seems very surprised by what we’re ordering (mila de pollo completo sandwich). We point to it on the photocopied menu that we grabbed outside the door and it’s as if he’s never seen it before. He has to comeback and check it three times. Despite his repeated checks it still says “Mila de Pollo Completo”. His wife, who actually does all the work, does not. She puts it together and double checks that do in fact want the bits that make it a completo (in this case sliced tomato and hard boiled egg). Si Si.

The sandwich, and it’s chicken patty, is cold, and delicious. While we ate the maid came in and cleaned the room in her “Hetero Friendly” t-shirt.

As an aside: one thing I’ve noticed about the Axel Hotel is that it is not a great place for non-couples. The problem is that there’s no way to take a shower without your companion seeing you standing there washing. There’s a semi-privacy wall thing but the mirrors and glass conspire to make it mostly useless. This is not a problem for us. I’m just saying. Also, thanks to the mirror placement by the shower you can see around the corner from the bed, where you’ll most likely be sitting, into the bathroom, where your partner will most likely be… shitting. Fortunately, there’s a door by the toilet.

We sit around, do some work, and eventually get out the guidebook because Dachary wants to go somewhere tasty for dinner. The Lonely Planet does not let us down. We wander down the road, and into a place that is filled with locals and a smattering of tourists. It is somehow loud but not annoying. I order the Bandiola de Cerdo (I think that’s how it’s spelled) which turns out to not be pork medallions but the two most delicious pork chops I have ever experienced in my life. They’ve not been sauteed. They’ve not been sauced. They’ve not had anything sprinkled on them, and they’re not served with anything beside them. They butchered the pig, made two chops of the perfect thickness, and threw them on a grill that would make any backyard chef envious. The taste of the grill infused the meat, and it was served on a simple metal plate. It was delicious, and the mashed potatoes I’d ordered on the side were wonderful, and similarly lacking in anything unnecessary. Potatoes. Butter. 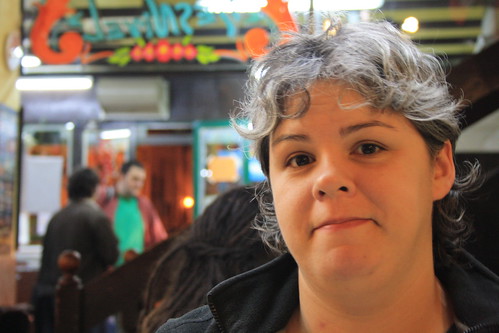 Dachary ordered the Beefsteak (I forget the Spanish for this) which ended up being thin pieces of pot-roast like beef. It was good, but sadly she’d tasted the deliciousness of my Bandiola, and spent the rest of her bites wishing she’d ordered what I had.

Yes, we have definitely landed on our feet.