Today was the day. We were meeting Ed at the parking garage at 11AM to drop off our bikes.

It was a tough day.

We know we’re doing the right thing. We’re happy we’re going to be keeping our bikes, and we know it’s just a matter of time till we get the money to come and claim them. It’s a slightly daunting number to raise in 7 months (how long we have left until our Temporary Vehicle Import Permits expire) – basically we have to be putting away $1,000 per month, which is a lot but we believe it’s do-able. It would be better if Kay had a job to go back to, and if most of my clients didn’t pay on a Net 30 which means about 6 weeks before I have good money coming in again…

… but we’re both intelligent, enterprising people who are no strangers to making money when we work hard and get creative, so there’s no doubt in our minds we’ll be back within the timeframe to claim our bikes.

But still. We hate to leave them. And we’re probably not going to be able to get them back until October, at the earliest, which means we’ll miss riding the entire summer (pretty much the only riding season Boston has). So that kinda sucks.

I set the alarm for 8:30, and because David kept us up late chatting again (party animal! With a broad range of amusing and vaguely disturbing conversation…) we actually slept until the alarm went off. Puttered around for a bit and then hit the road around 9:40AM, armed with our bike covers.

Alas, David was also heading out today, so we said our goodbyes before we rode off. 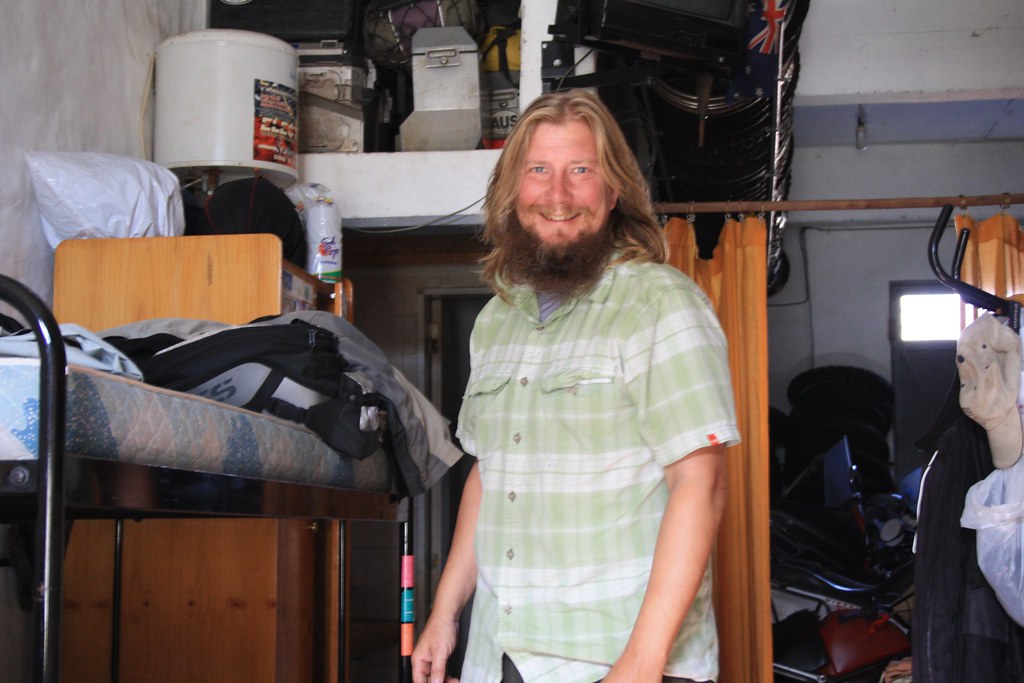 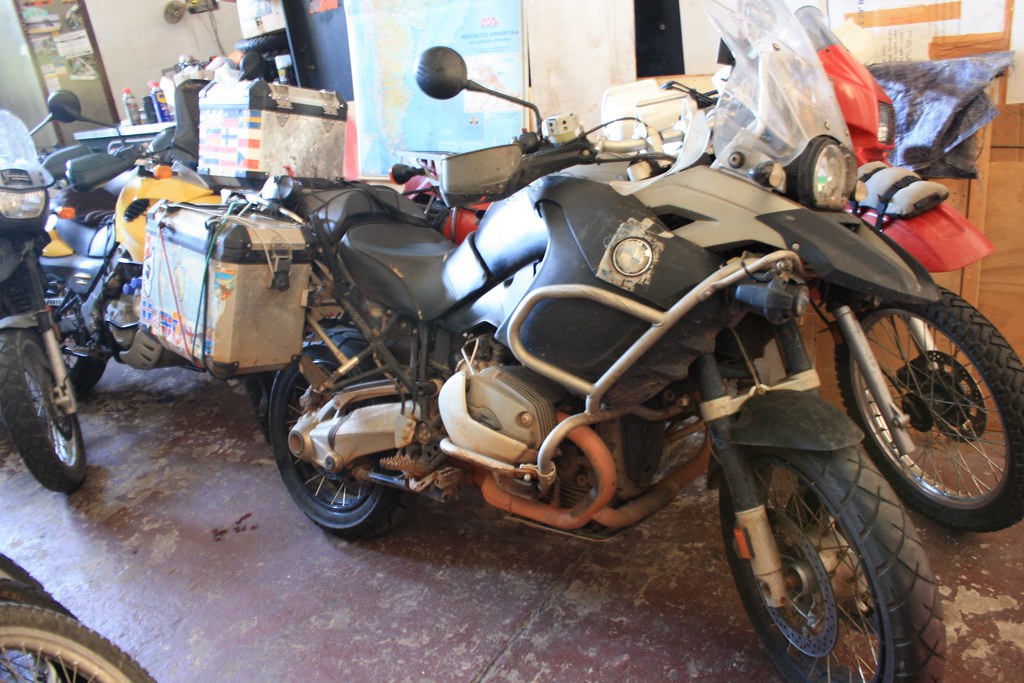 (By the way – did we mention that David was also a motorcycling newb when he set off on his trip in 2009? He’d ridden his BMW 1200GS just enough for the first service when he left, and before that, he’d only ever ridden a scooter, and hardly spent much time on that. That man has been all over Africa and half of South America, and done some pretty technical riding, and is still on the road. Who says newbs can’t take big trips? He puts mine to shame. And on a 1200GS – what a pig to be picking up when you’re riding solo!)

On the road, we’re reminded that the bikes are so light and maneuverable without all of our crap on them! It really is a joy to ride the bikes unencumbered, and made the parting pang even more acute – to be reminded of how much we love the bikes on a day-to-day basis – not just for this trip.

Got back to the parking garage with a minimum of trouble, and nearly 30 minutes before we were supposed to meet Ed. The security guard knew to expect us this time, and told us to head on down to the spot, where Kay and I proceeded to stash the bikes the way Ed had told us the day before. (He wanted us to park them sideways in the very back of the spot so he could fit other bikes in front of them.) With a little maneuvering, we got them put in snugly and then covered them up. 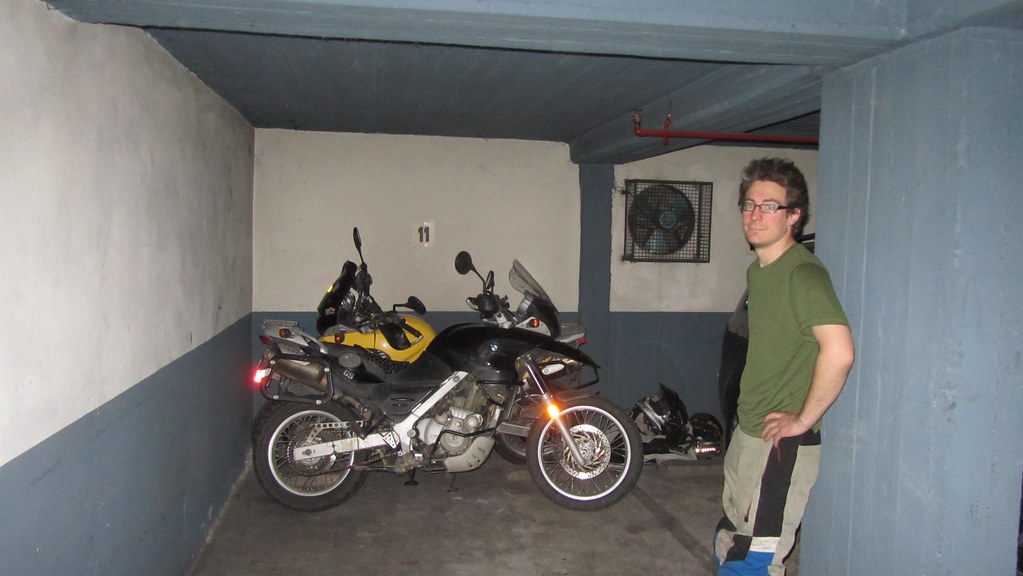 Leaving them hurt. Even though we know we’ll be back for them, it’s unnerving to simply park them in a parking garage and know it will be months before we’re back for them, and no-one will be looking after them in the meantime. Sure, it’s a private garage with a 24-hour garage and CCTV, but it’s not the same as if we left them somewhere where a biker is always around, like Dakar Motos.

We go over the instructions again with Ed and his wife, and give them copies of our TVIP and pay for the first month’s storage. Then we ask how to get back to Dakar Motos. They tell us to take one of two buses (the 92 or the 93) to the train station, and then we’re on our own for which train or which stop we need (luckily we already know that). Then they walk us over to the bus stop, since they’re headed that way themselves, and we catch one of the buses in the right direction. Success!

A guy who got on the bus at the same time as us takes pity on us, shows us where to put our money (the slot is behind the driver’s seat – not next to the driver like in Boston) and where to pick up our ticket. And then he agrees to tell us when we reach Retiro train station. We ask him in our poor Spanish, and he just smiles and says “yes” to us. I don’t know if he speaks a lot of English or just a few words, but I get the impression that he was amused at us with our poor Spanish, hauling around our moto gear, tank bag and Camelbak.

He tells us when we get to the train station, and we hop off the bus and then wonder where to go. Luckily, the day before, David had given us instructions on which train to get back to Dakar Motos (the train here is in a smaller train station off to the side of the main terminal, which would be really confusing if no-one had told us that beforehand) and I remember it as we’re looking at the buildings, so we walk over to the correct terminal and find the train. We try to buy tickets, but the woman at the window just waves us toward the corral, and the man at the corral waves us past when we tell him we’re “sin boletas” and tell him our train station. No idea why.

We find seats on the train, awkwardly holding our stuff and trying to keep it off the guy across from us (they’re two seats that face each other in the middle of the car, instead of the traditional forward- or rear-facing seats in the rest of the car). While we’re riding out to our station, people walk up and down the train selling stuff. Water, soda, candy bars, pastries and who knows what else. A guy with a guitar gets on and starts singing in our car, and then collects donations at the end. The train is a hotbed of commerce in Buenos Aires. At one point, a guy puts a candy bar on my arm (I’m too busy holding my stuff to wave him off) and then walks by again and collects it a few minutes later, when I don’t pay him. So very weird.

Find the correct stop with no trouble, get off the train, and grab some sandwiches from the panderia since we haven’t had breakfast or lunch and it’s nearing 1PM. Back at Dakar Motos, we sit at the table in the little garden out back and enjoy our sandwiches. It’s very bittersweet.

The most challenging of the logistics are out of the way, so now there’s only luggage to deal with. If we’d been even a day later, we wouldn’t have been able to store the bikes here in BA with Ed – he was leaving today for Spain where he’ll spend a few months before returning to BA. We’re fortunate to have gotten this taken care of so easily, and yet it’s still sad to be bike-less. On the train home, I comment to Kay that “we’re passengers now.” And it’s true, and it’s so very… depressing.

We don’t feel like doing much of anything, so after lunch, we sit around and poke the Internet, read on our respective devices and just chill. At one point, I comment to Kay that I want to play a game with him on the iPad (we bought several before we left and haven’t played a single game the entire trip) and I get an introduction to Carcassonne. In all, it’s a relaxing bit of downtime where we don’t do much of anything, which is exactly what the doctor ordered after the emotional ups and downs.

Kay’s note: The Carcassone board game is excellent too, and has lots of expansion sets. The X-Box Arcade version is good too. Yeah, it’s one of my favorite board games and I own all the versions. 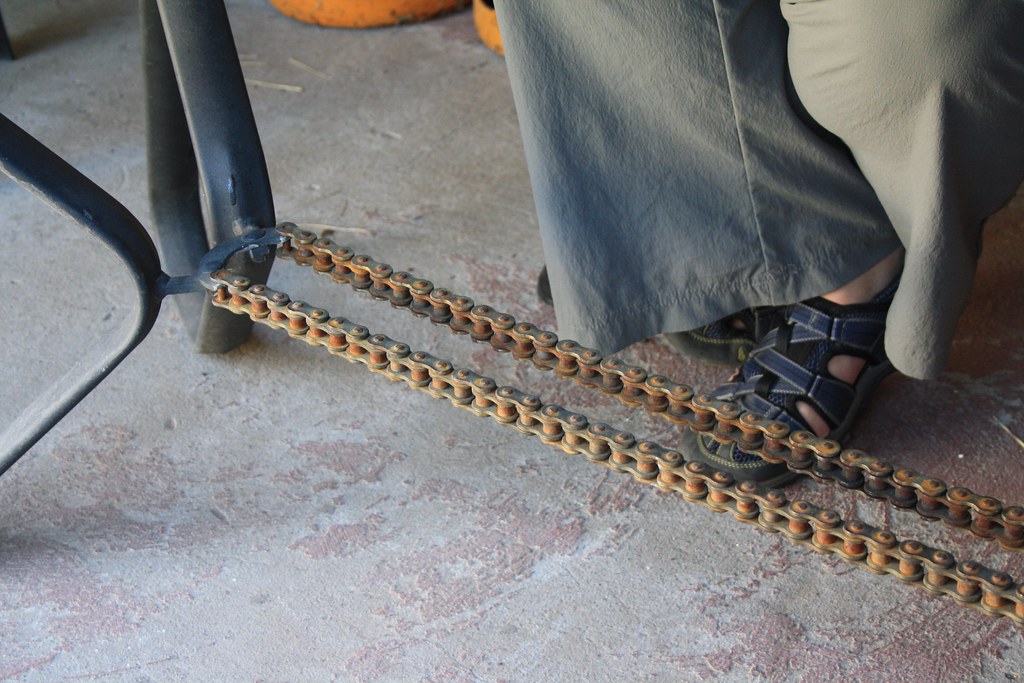 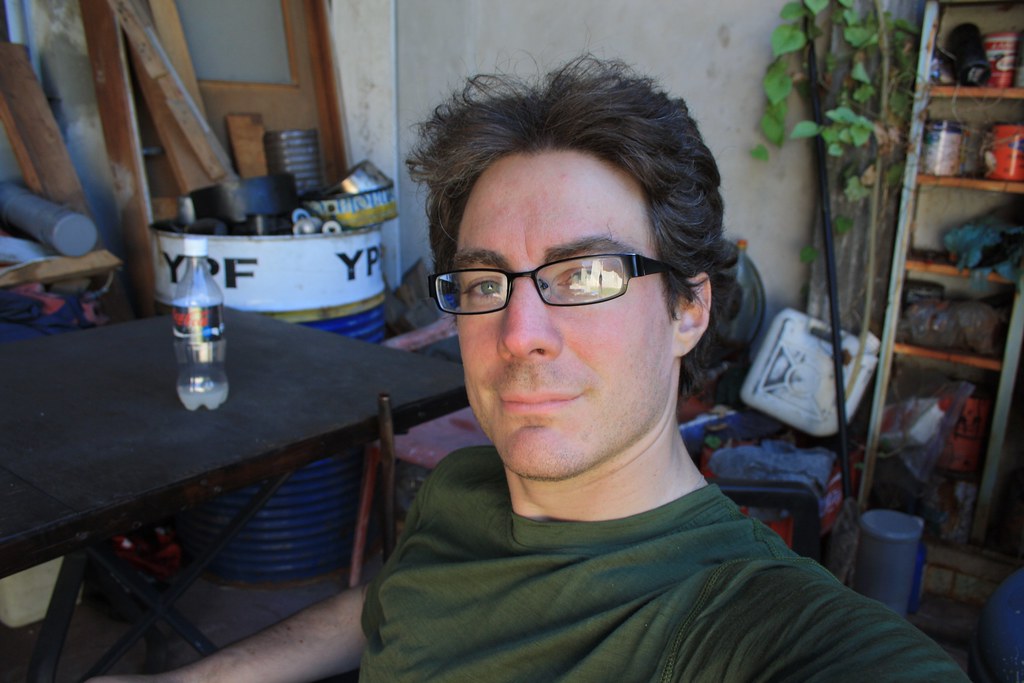 Eventually we tackle our panniers. I don’t want to try to bring my panniers on the airplane as luggage, as the only way to latch them requires me to lock them – and I suspect the TSA will break my locks back in the US. So I’m hoping that I can store my panniers here at Dakar Motos, and send them back on the plane with the bike when we come back to ship the bikes home. To that end, we rearrange the panniers – Kay puts stuff from his panniers that we don’t need to take home right now into mine, and I pull out the stuff I want to take home and shove them in his.

We’re leaving stuff like the Cycle Pump, bike spares, tools, the service manual, the cooking gear… because we won’t need that stuff without our bikes. But we’re taking home our motorcycle gear – Kay says “just in case” so we have to shove our pants and stuff into his panniers, and the plan is to try to go into Buenos Aires tomorrow to find a piece of luggage to use for the rest of our gear. The helmets are the tricky parts as we know they won’t let us just carry them onto the plane as a carry on item, and I want to make sure they’re adequately protected from the rough handling that baggage receives. The whole point of helmets is to be able to absorb a shock, and they’ll be useless if they get too banged up in transit.

After sorting through the panniers until I get sick of it, we take showers that feel wonderful because it’s been a few days since we’ve bathed, and then go back to the pizza place for dinner again. It’s the third night in a row that we’ve eaten there, but it’s late and I don’t feel like going to the grocery, buying food and starting to cook this late. It’s weird and much quieter to be there without David. The food is still good, but we’re both really tired – all of the travel and the emotional stuff is catching up with us, so we crash for the night when we get back to Dakar Motos.