The day started with the sound of wind, and me taking experimental trip into it to find croissants.

When we got off the bikes yesterday I was sweating my ass off. It had started off cool, and when the winds picked up enough we’d both turned on our jackets just a wee bit. But at the end, walking around looking for a hotel left me sweating. This morning I decided to forego the thermal leggings and the rain liner in the top. I swapped the Cyclone Buff for the lightweight one and pondered swapping in the summer weight gloves, but Dachary stopped me with the simple reminder that we’re always too warm when we start, and then just right, or even cool, when we’re on the highway.

On the highway she was proven wise.

Around 12:15 we pulled into a YPF, filled up, and went inside to eat, but were told we’d have to wait for 12:30 to get sandwiches. So we do… and then we wait another ten minutes. Then a girl comes over and takes the order of the people sitting at the table next to us. We go up and order for ourselves.

My Hamburgesa and Dachary’s Milonesa (sp?) sandwich take just short of forever to come. I’m getting somewhat annoyed because there’s no good reason for it to be taking as long as it is. Dachary reminds me we’re in Latin America and everything happens about 400% slower.

The foods pretty good, although by the time Dachary’s approaching the end of her rather huge sandwich the Argentinian “odd flavor” has reached critical mass and she can’t finish it.

So, we head out, and turn down the paved road to Punto Tombo, and then onto dirt for the last 20k, but it’s pretty good; mostly just a thin layer of gravel on top of hard packed dirt with occasional hard packed sand under thin gravel. 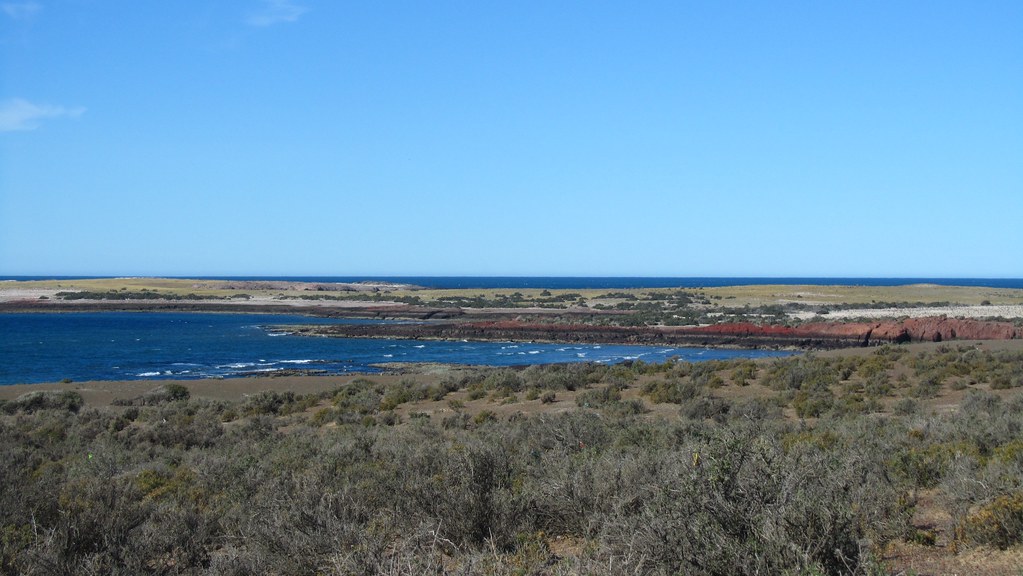 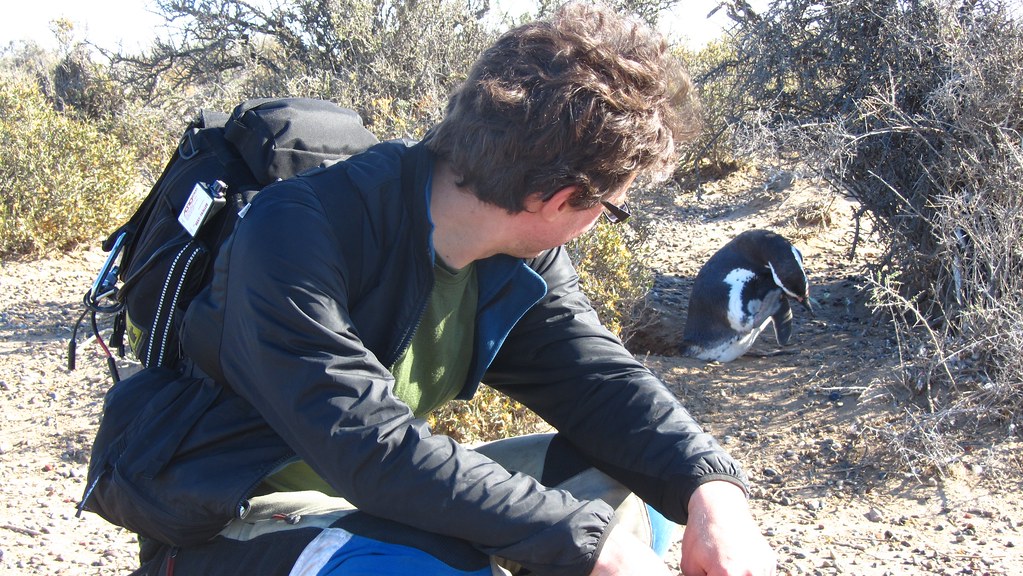 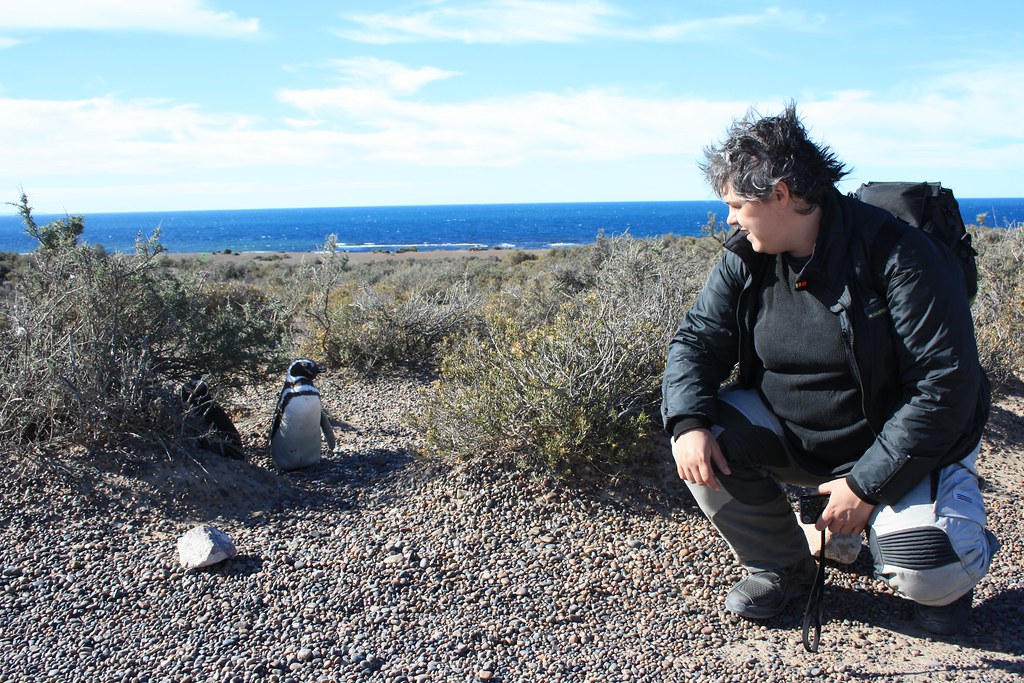 There were a number of young ones who hadn’t finished plucking out their baby feathers: 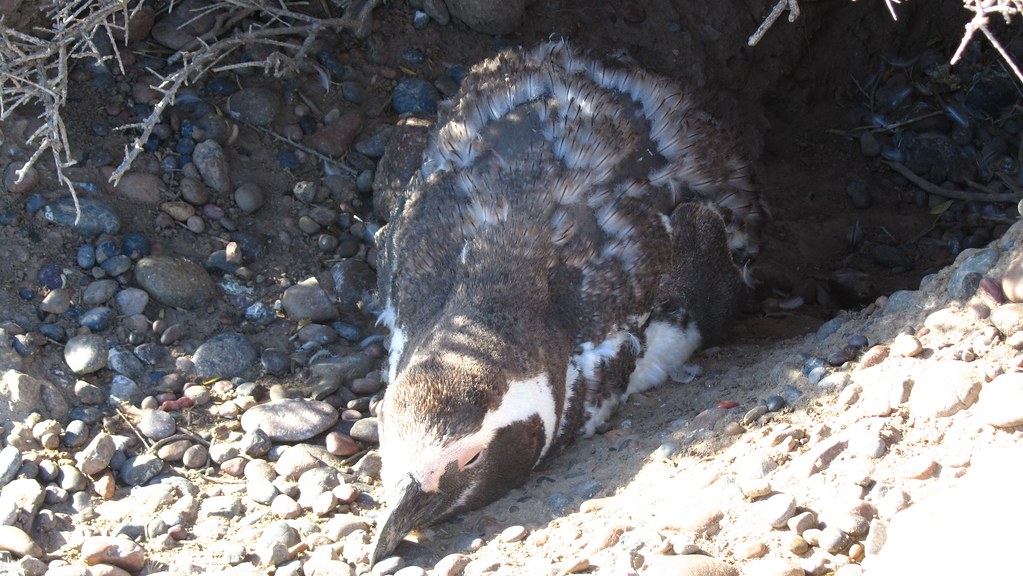 My friend John requested on our blog that I wave to the penguins for him, so: 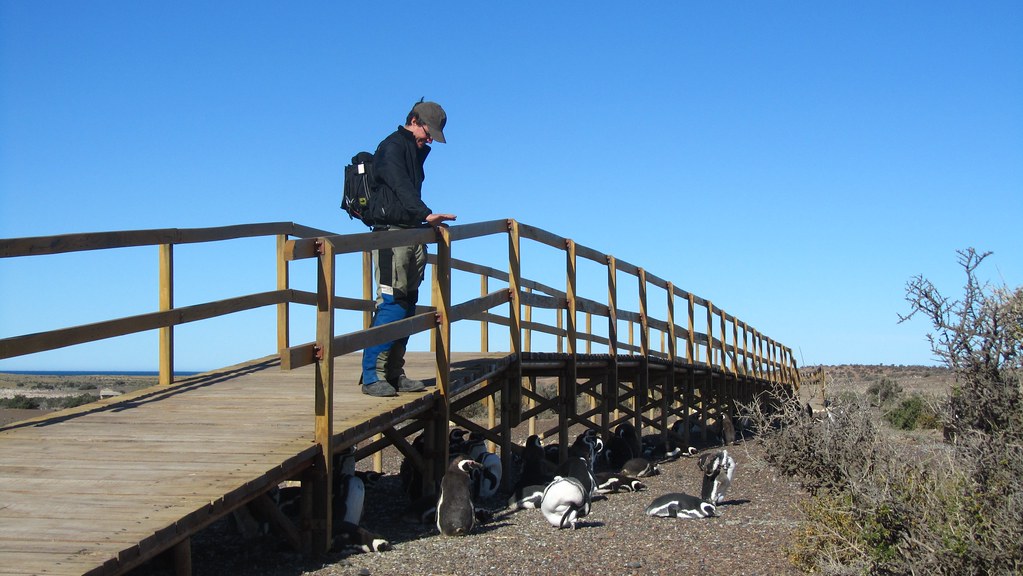 One thing we weren’t expecting there was llamadeer 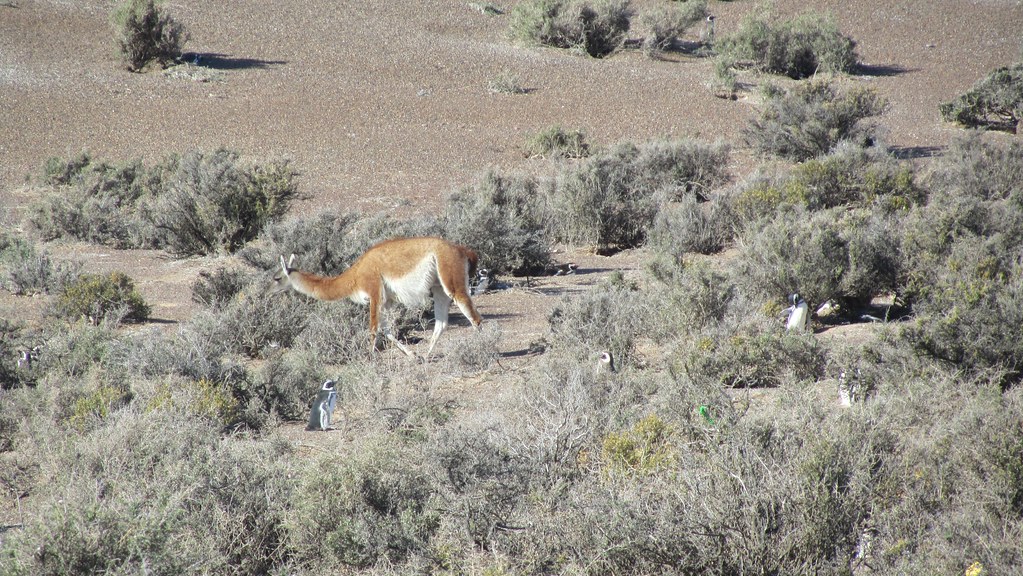 I love this pic. I just never expected to see penguins in a setting like this. 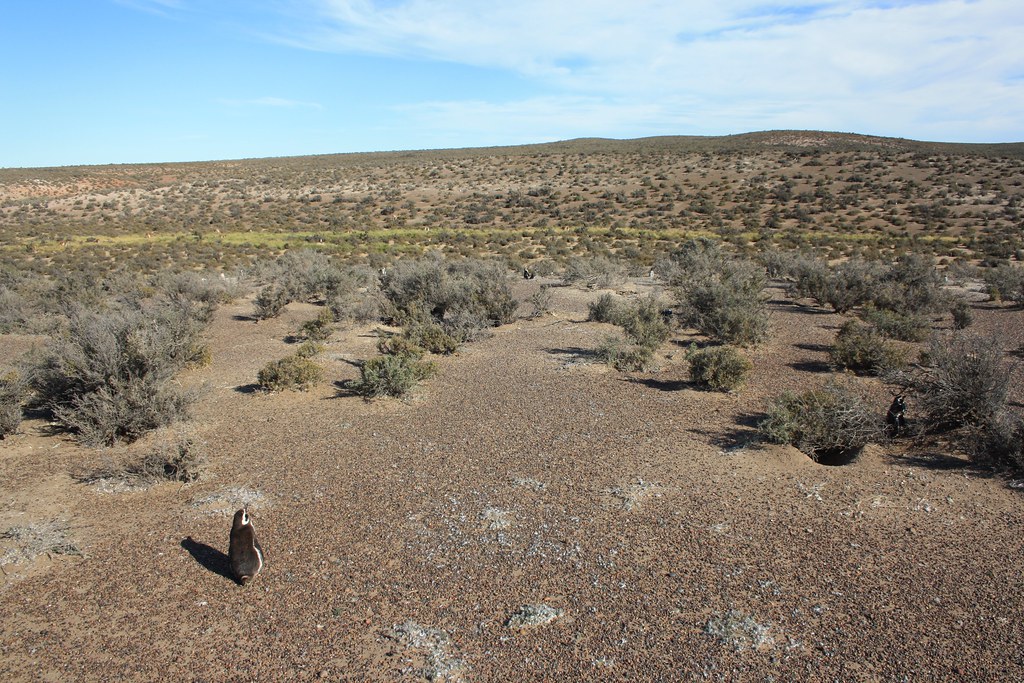 The pattern of their feathers is so cool 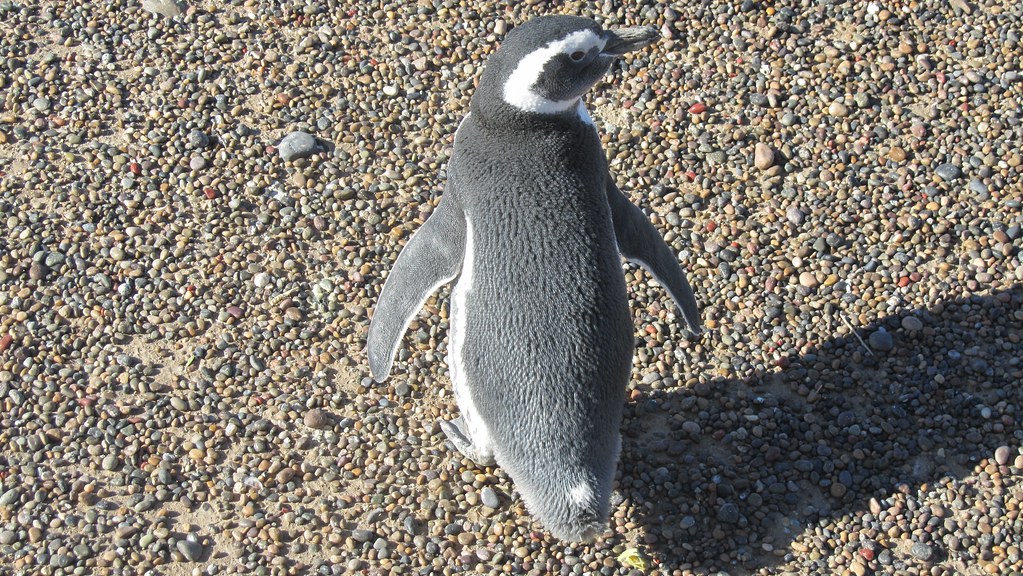 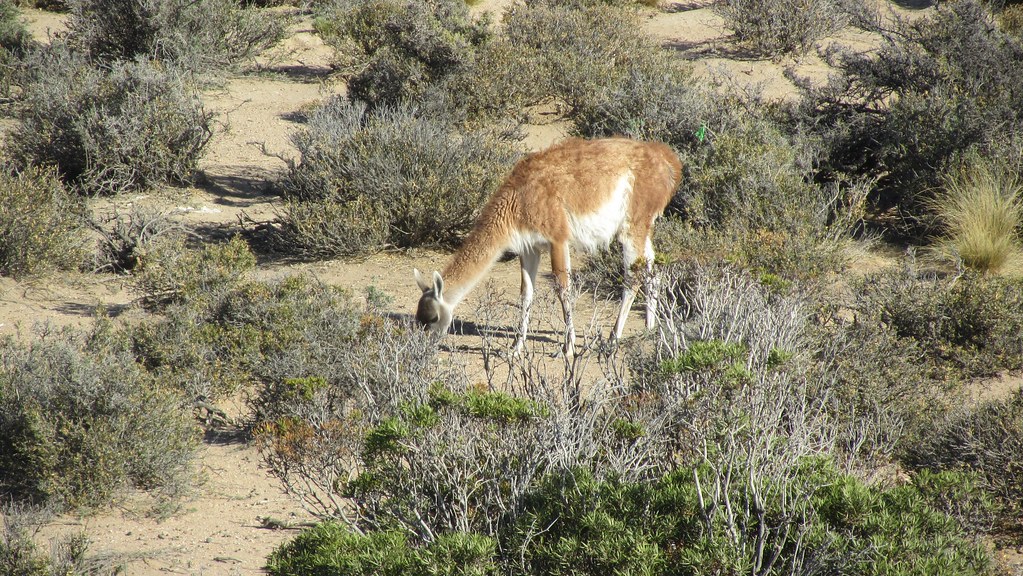 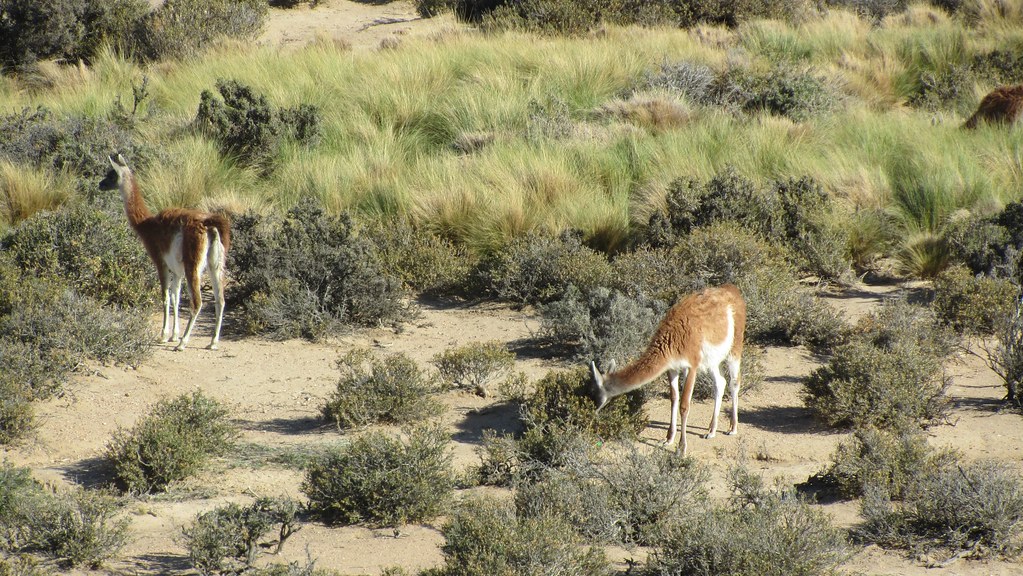 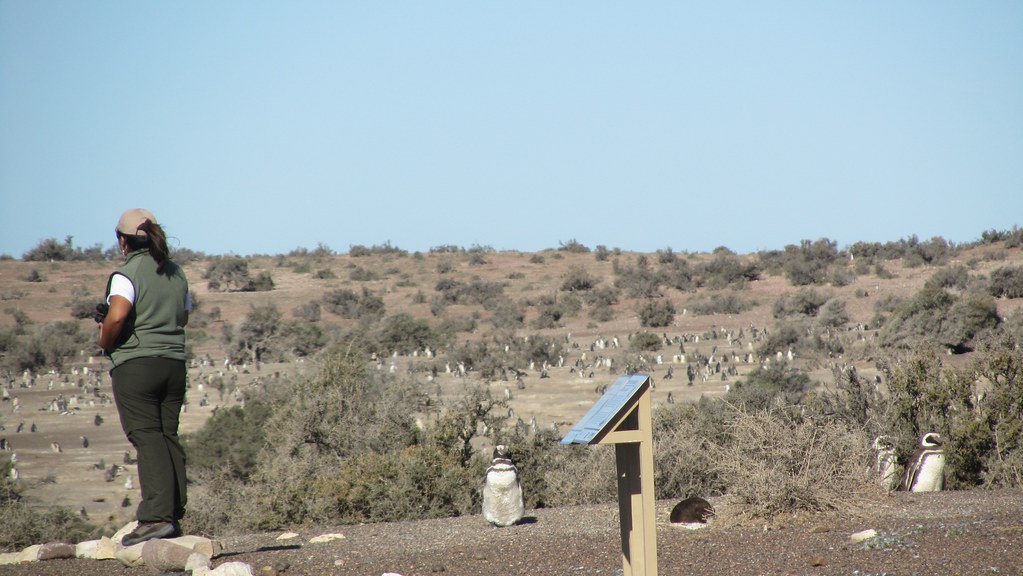 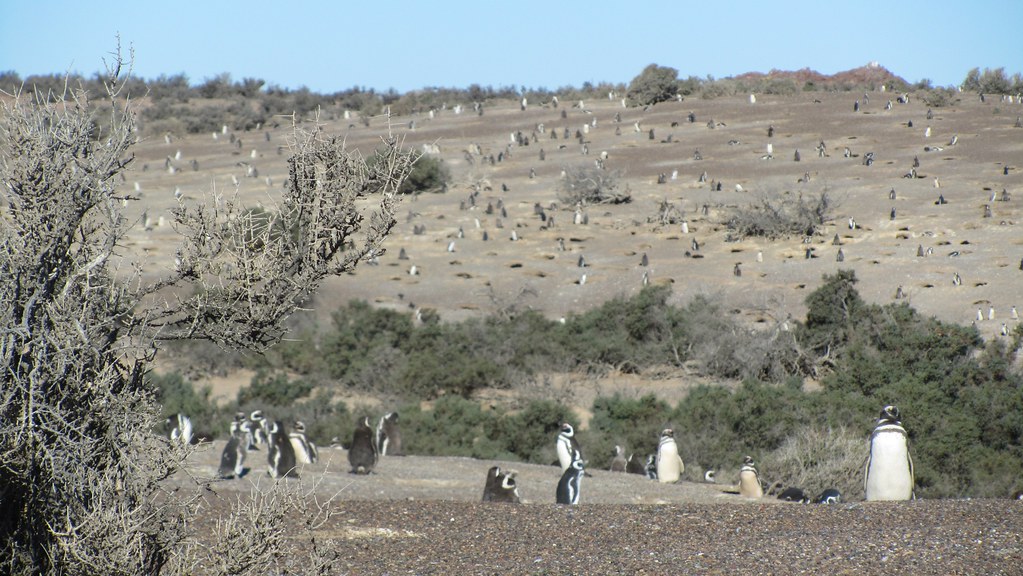 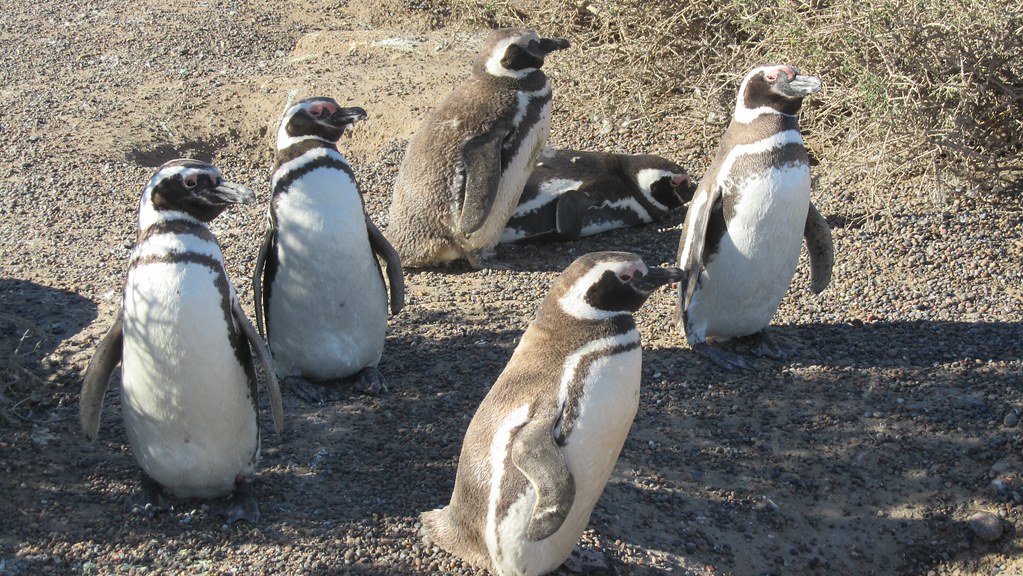 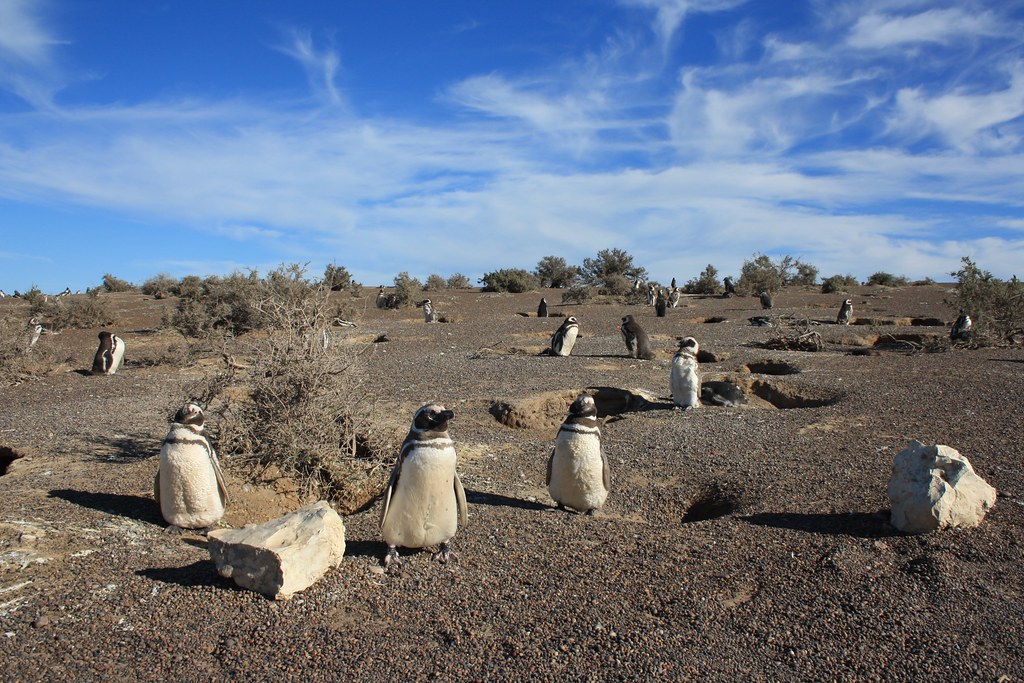 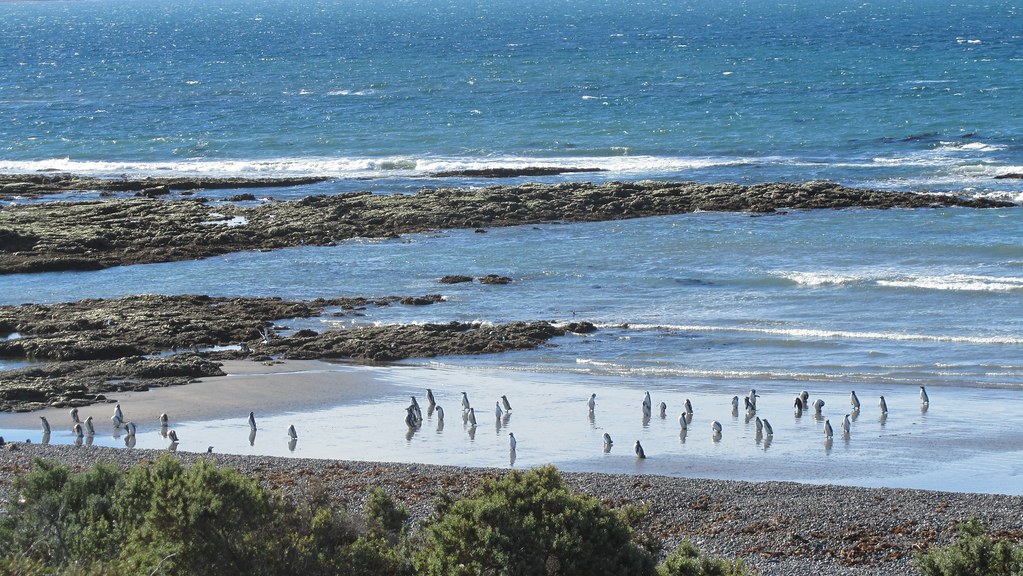 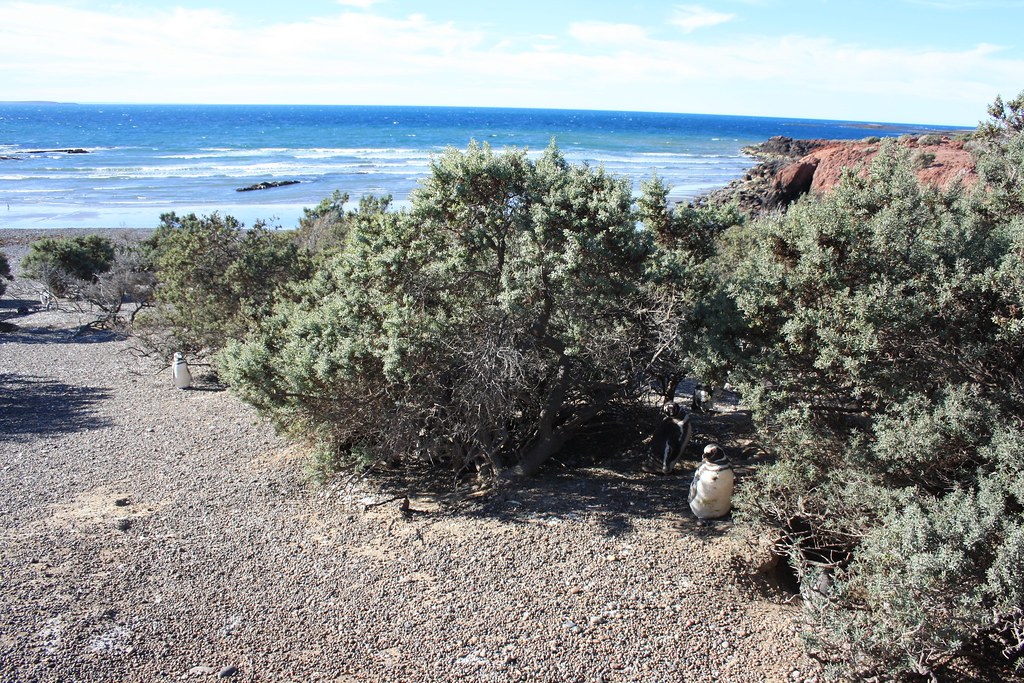 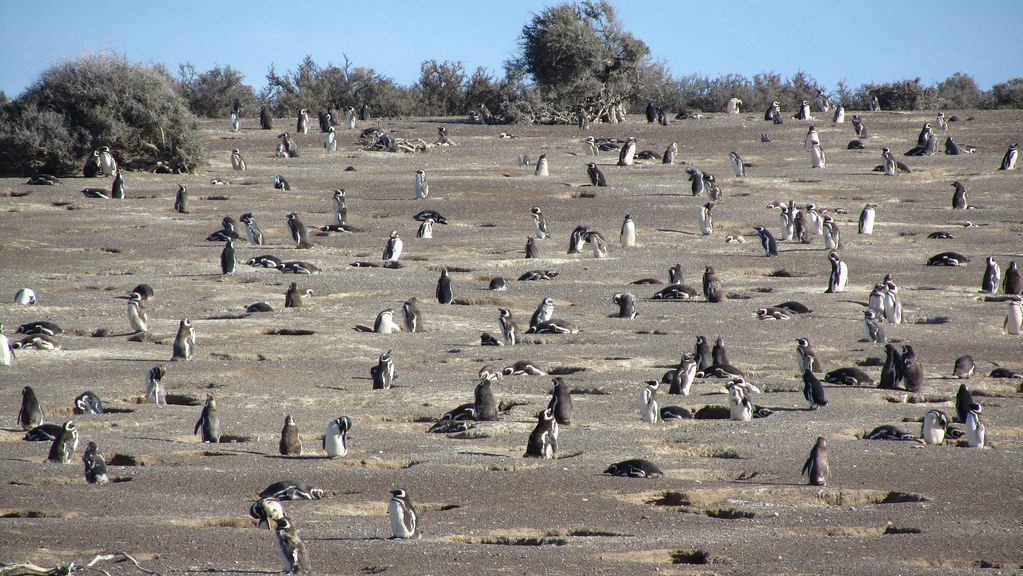 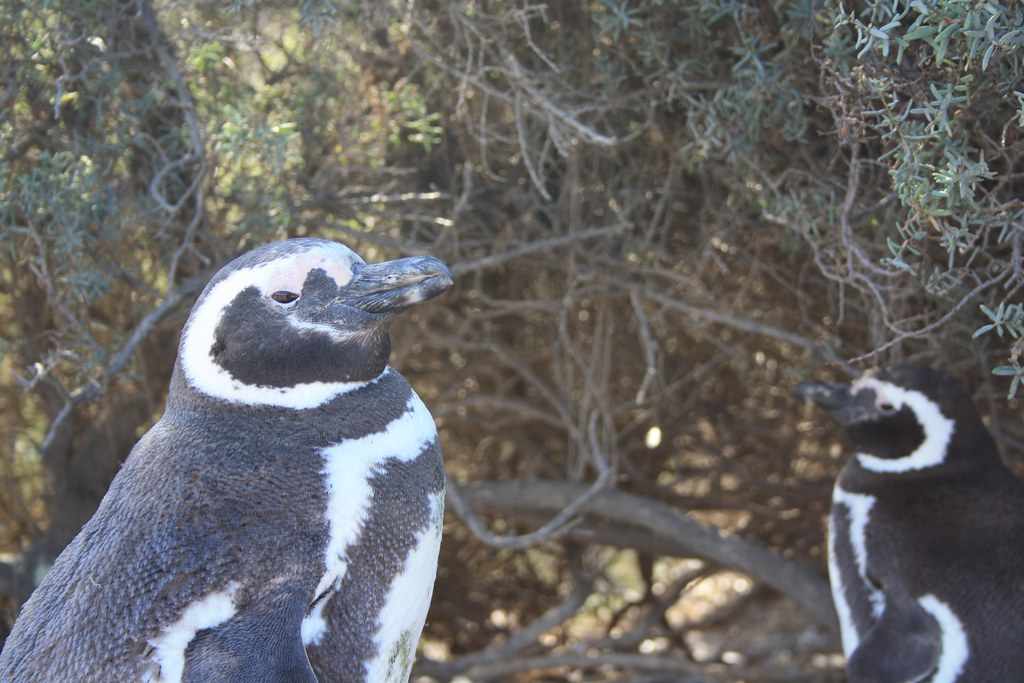 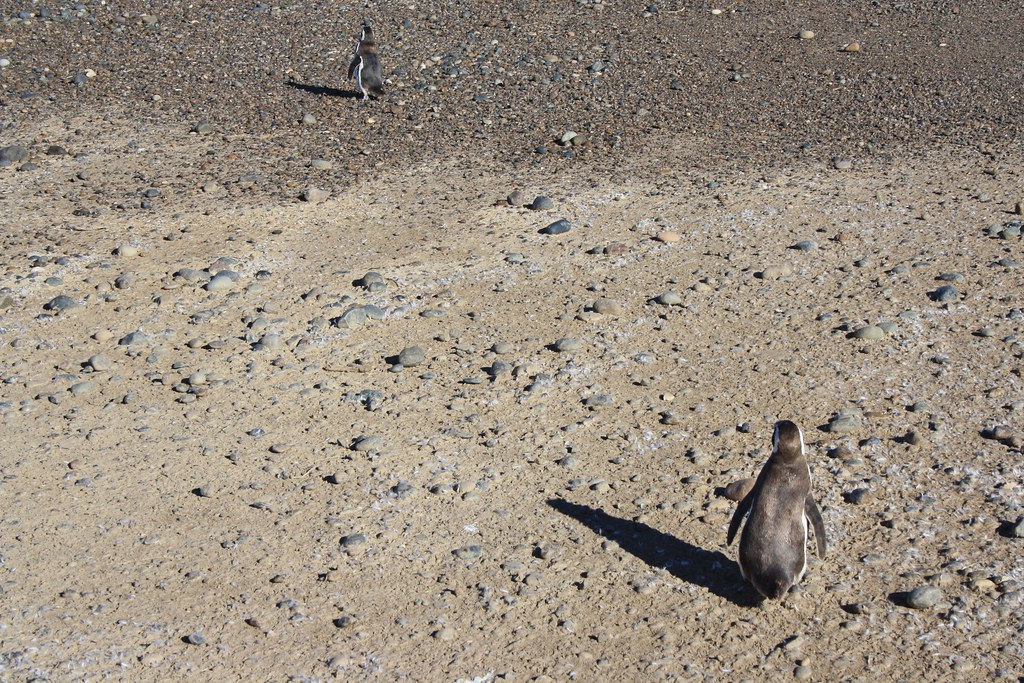 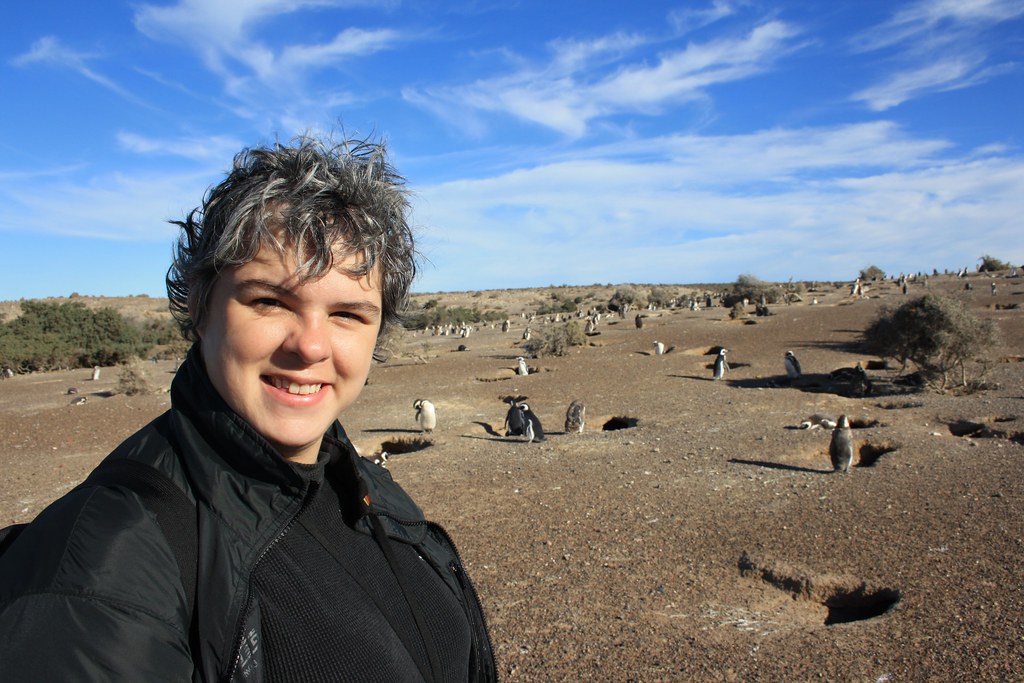 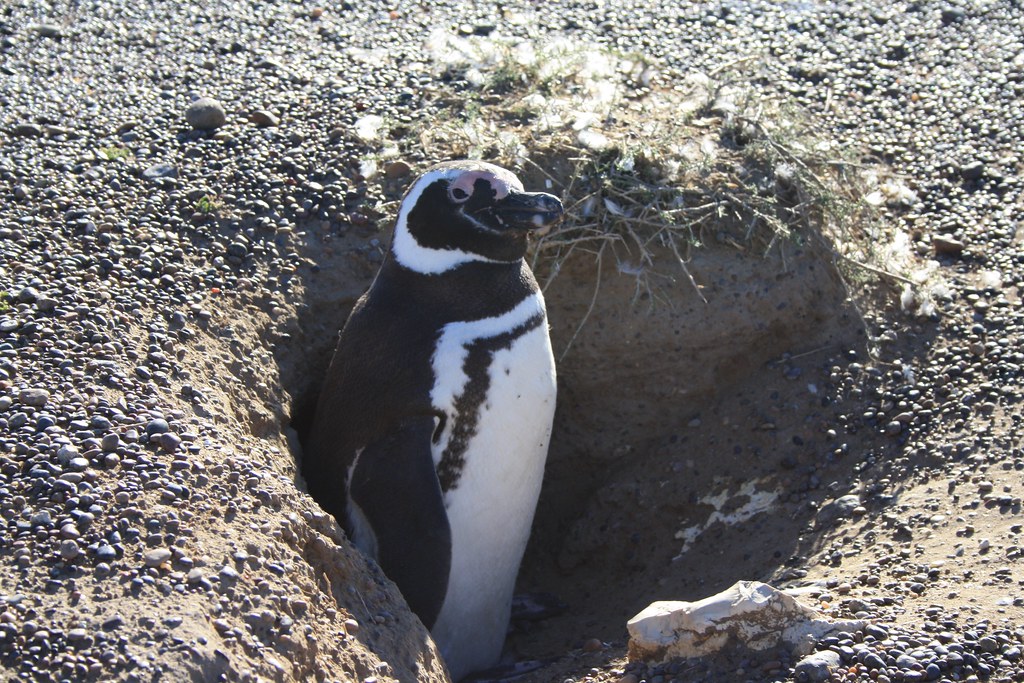 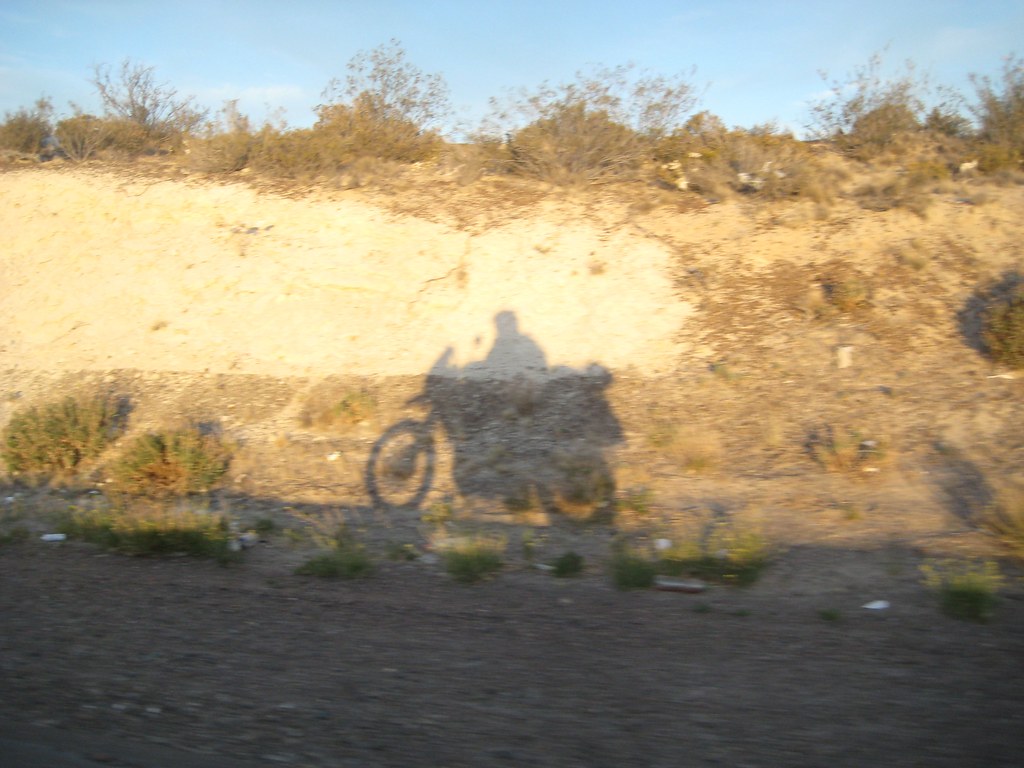 Eventually Dachary’s boiling as she’s wearing motorcycle boots, and motorcycle pants with rain liner, thermal leggings, her waffle shirt, and her electric jacket (unplugged obviously). I’ve got the same but without the thermal leggings and am able to make it the last 250 meters of the trail and back but the way back is pretty hot, and the sun is starting to get pretty low. I’d run out of water in my camelbak on the way in, and the bikes will run out of gas on the way out if we don’t fill them. So I run in to get water, and then we start filling the bikes from our cans.

We’ve moved far enough north that we’ve lost almost an hour of daylight compared to Ushuaia, so we take the dirt a bit faster than before, and exceed the speed limit on the pavement by a bit more than before too.

As we’re coming into the city limits of Trelew we see a Petrobas, and then, “What’s that?” there’s a Hospedaje right next to it… with a restaurant. It looks pretty deserted, but still has folding chairs out front…hmm.. I go in and SCORE. Hotel, Wi-Fi, restaurant, next to a gas station, with zero need to go hunting through a city! Resonable price (for Argentina) too; about 220 pesos ($55 US).

The place is pretty newly constructed, the Wi-Fi actually works in the room, and we are so effing psyched to not have to deal with hunting in a city.

It’s called the Hosteria Ffarm-Taid and you can find it at S43 17.306 W65 15.961 Just look for the Petrobas as you are coming into town from the south, or after you’ve left town if coming from the north. The pork chop at the restaurant was really good too, but the fries and mashed potato kinda sucked.