I realized this morning that the money from the stocks we sold should be in my account, and as a result i should a) no longer be negative and b) should be able to buy the plane tickets. So, I hop over to Orbitz and Travelocity to see if the price has gone up since the last time we checked. Yup. But, oddly, if we travel three days earlier than the cheapest day last time we get a few hundred bucks off. I go to book it but my card is rejected.

Frustrating, but not wholly unexpected. My account was over $1000 negative for a while so I’m not surprised they put a block on the card. I call them up (thank the gods for Skype) and find out that yup, that’s what happened, but I’ll have to wait until 8:15 AM Eastern time (we’re an hour ahead of them here) to call the department that has the power to unlock it.

So, we go down to breakfast, come back, and call. It’s one of the most painless phone calls I’ve ever had with a bank. “Give it at least five to ten minutes before trying.” she says. Five minutes of packing later and I’m resubmitting the form on Travelocity. Ooops, session timed out. Redo the search, get the same price as before, try to book it, and get a warning message “the price has gone up!” like $500 up since half an hour before. “WTF?” I think. I redo the search. Now it’s $800 higher. “You Ass holes!” They know I want it, so they keep jacking the price.

I search around and find that If I fly out one day later than that I’m only about $200 more than earlier in the morning but still ahead of Orbitz and the other Travelocity price. I hate this bullshit. On the up side, this flight leaves just after noon instead of at 3 in the morning. Unfortunately there’s an 8 hour layover in Washington DC in the middle of the night. Anyone feel like hanging in the airport? I doubt we’ll be getting much sleep.

So, running late, Dachary stressing about passing the checkout time, and not entirely sure where we’re going to attempt to see penguins today, we set out. Oh, wait… there was a printer by the hotel computer. I drop my tank bag by Dachary and the bikes and go back inside to print. I figure it’s better here than hunting down an internet shop with a printer later on. And *then* we set out.

It was freezing when we started. I mean that literally. It was 32 F / 0 C as we packed the bikes. On the road Dachary’s eyes were watering and I was riding with my left eye closed because the frigid patagonian side-wind hit the helmet in precisely the right way to sneak in and blow on my left eye. Having one really cold eyeball is not a pleasant sensation.

Thankfully, we had the electric jackets and grips, but an hour into it and we had both commented about sore necks from the wind. 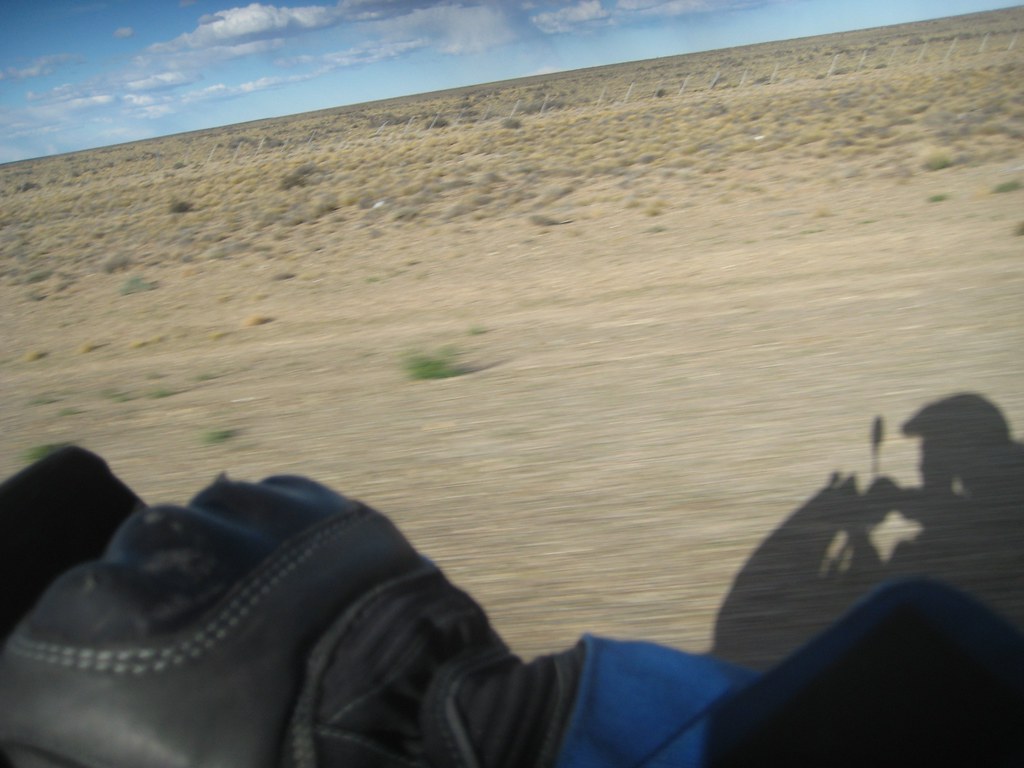 We rode on until the YPF (Gas stations down here are either YPF or Petrobas) we’d found on the way south that had gas and real lunch. Dachary had a perfectly round piece of pounded, breaded, and deep fried chicken. It was somewhat disturbing in its approximation of a perfect circle. I had a quarter chicken, rotisserie style I think. Mostly, we just enjoyed being able to sit without our necks kinked over to the side for a while.

We encountered a couple semi-frozen Argentinian adventure rides as we left, but they didn’t seem too interested in chatting, and we headed for Puerto San Julian. A number of sites and promo things we’ve seen claim this is the place to go for Penguins. Drive into town until you hit the water (or the replica of a spanish ship) hang a right, and you’ll see a tiny pale shack with big yellow letters. You can’t miss it. The problem is, that the boat only goes out when there are at least four passengers. But, they didn’t seem particularly confident that the next boat would have four passengers. They didn’t seem particularly confident that the next morning’s boat would have four passengers either.

I inquired when it was that the penguins left. Somewhere between the end of march and the middle of April she replied. In December they return to have their babies. I asked this because there are two penguin breeding grounds north of here that we can drive to on our schedule without waiting for two other people who may or may not show up.

Better yet, it doesn’t require staying in San Julian because it’s a fucking depressing little town. We can’t describe precisely why, it just is. It wants to be a tourist town, and judging by the number of hotels it’s PR department is doing a good job of convincing the world it is, but it’s just a sad place and neither of us had any desire to stay there, especially not when staying might result in more depression resulting from a lack of boat.

So we headed north. There was a good chance we’d end up staying in Tres Cerros again and we discussed how sad it was that we would rather stay in an overpriced gas station hotel with the world’s worst Breadfast than in any of the hotels or Cabanas in San Julian. At one point Dachary suggested that staying in San Julian was like some sort of punishment, and, with a Godlike voice, said “Bad Tourist! We’re sending you to San Julian!”

I noted how fucked up it was that there were all these cabanas there, one place was even building a couple more, and they all were overlooking dirt fields. “Hey honey, let’s get away from it all and get a cabana in the middle of a dirt field!”

It had warmed up by this point, but as we left San Julian the wind got even stronger, and we spent much of it leaned over, taking right turns whilst leaning left. Soon Dachary suggested that she was not only sore from the wind, but tired and really not feeling like pushing beyond Tres Cerros tonight. I had zero problems with this suggestion and when we came back the lady remembered us and happily charged us just as much as before.

This time though, we were early enough to avail ourselves of the laundry service, which required learning the words for bra, underwear, shirt, and socks, since they do it by the garment here instead of by the bag.

Side note: We’ve heard other adventure riders suggest that they simply pull up to a laundromat when they see one and throw all their stuff in. We would love to do this, but to date we have seen zero laundromats. There was one place that looked like a laundromat in Granada, and may have been one, but it was also a cheap laundry service so we let them do it for us. Others we’ve talked to along the way have also been using various laundry services. Sometimes it’s cheap. Sometimes it’s $20 US. Most of the time we just do our laundry in the sink, but sooner or later you really do need to get it shoved into an actual laundry machine.

So yeah. We’re chillin’ in Tres Cerros. Hopefully we’ll see Penguins at Punta Tombo tomorrow. We think we can get there with just over 20k of dirt which we hear tale is well maintained for all the tourists.

We were going to post this from Tres Cerros too, but the power went out, and the internet never worked again after it came back… grr.

( Dachary’s note: what hasn’t really been coming out in the posts for the past few days is that I think Kay and I are mentally checked out of the trip now. We’re still a little over 2k kilometers from Buenos Aires, and have something like 10 days to kill before we can fly home, but neither of us is mentally “here” anymore. All the time leading up to Ushuaia, we were living *in* the trip. Our focus was on our day’s travel, maybe something ahead, with the ultimate goal of reaching Ushuaia somewhere off on the horizon. Neither of us ever really thought or talked much beyond that.

Now that we’ve reached Ushuaia, even though we still have a fair amount of riding left, penguins to see and more time until we go home, we’re both already thinking ahead. It’s about home now. We’re both very much looking forward to seeing the dogs. I’m thinking about various writing projects and work. And, amusingly, Kay is already planning the next trip. He’s currently leaning toward the Trans-American Trail on a Honda Ruckus, which I’m willing to do but will reserve real planning until we’ve at least sat on them. He had big plans for the Stella, too, but hated the thing once he bought it, so I’m not so interested in planning that far ahead. But we’ve been debating what we’d bring on a Ruckus, how the trip and gear would be different, etc…

Yeah. Neither of us is in the here and now anymore, which seems like a shame for this part of Argentina and the end of the trip. I wish I could be savoring the remaining days. I feel almost disappointed that I’m mentally checked out, because there was something really satisfying in being so in-the-moment on our travels before. It seems kinda sad to be thinking about work and all of the mundane things waiting for us back in Boston, while we’re still here on the end of this wonderful trip. )

Kay’s note to Dachary’s note: I’m not sure if I’d say “checked out” for me. But, the trip definitely feels like it’s over. Mentally I’m just killing time. It’s not that I feel sick of traveling. It’s that we’ve reached our goal and now we’re just waiting for the plane. As for the TAT on a Ruckus. I love the idea of doing a big trip on a small bike, and even if we never do it I’m totally enjoying the mental exercise of figuring out what gear we should / could take and what mods would have to be done to make it survive the western portion of the trail. It’s good to have something like that to ponder while you ride.