Didn’t set the alarm today and woke up at 8:30AM – it was glorious. Naomi and Alberto were packing up to head out, and Kay and I sat around and chatted with them for a bit before heading into town for breakfast. Happily, the lunch place we found on our first afternoon here also had breakfast, so we had an Americano – tons of food. Toast with butter and jam, corn flakes, fruit salad, juice and… the coveted eggs. Plus coffee for me and tea for Kay. It was a lot of food but we were so happy to have a real breakfast that we dug in and ate pretty much all of it.

Back to the campground, and Naomi and Alberto were still there! We were surprised as we thought they’d want to be up and out early, but we ended up chatting with them some more as they finished packing. A huge dog had been following them around all morning, and came over to stand in their way as they mounted up on the motorcycles and made to leave the campground. He tried blocking their path, but they revved their bikes and he got out of the way – although he ran along side of them all the way into town.

Kay and I puttered around the campground after they left. We mucked about with computers and reading devices on the picnic table next to our tent, and when I got chilly, we headed into our tent and enjoyed a peaceful afternoon just chilling out. The sun backlighting the trees cast gently swaying leaf-shadows on our tent walls, and we both really enjoyed hanging out in there more than we typically enjoy time off in a hotel. The tent is *our* space. We decided we need to camp more often, and hoped to get someplace warmer where we could camp more. 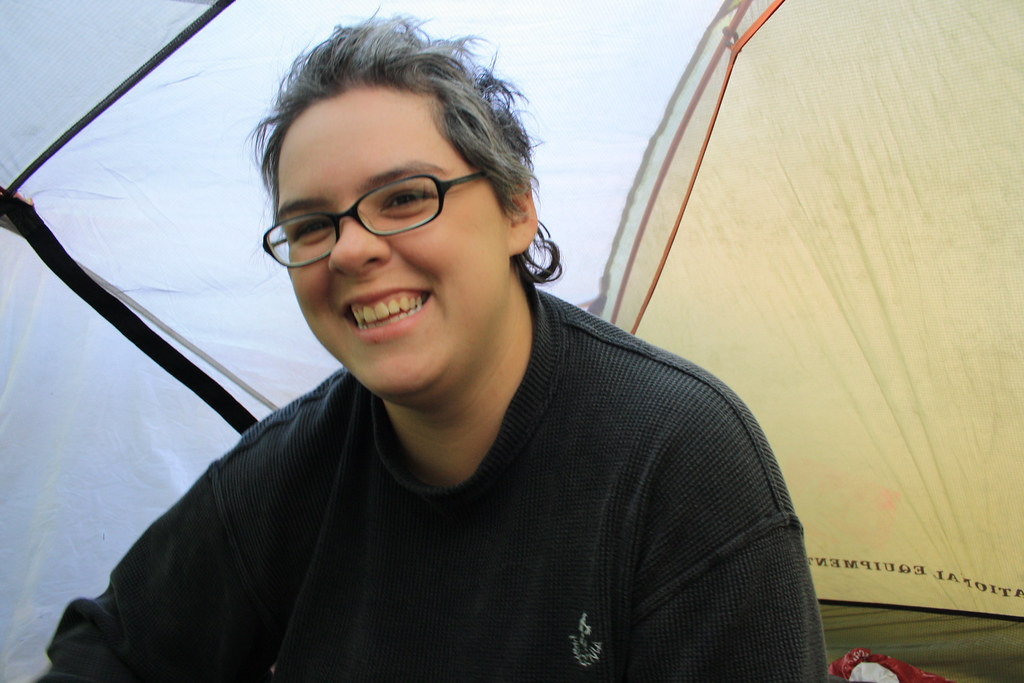 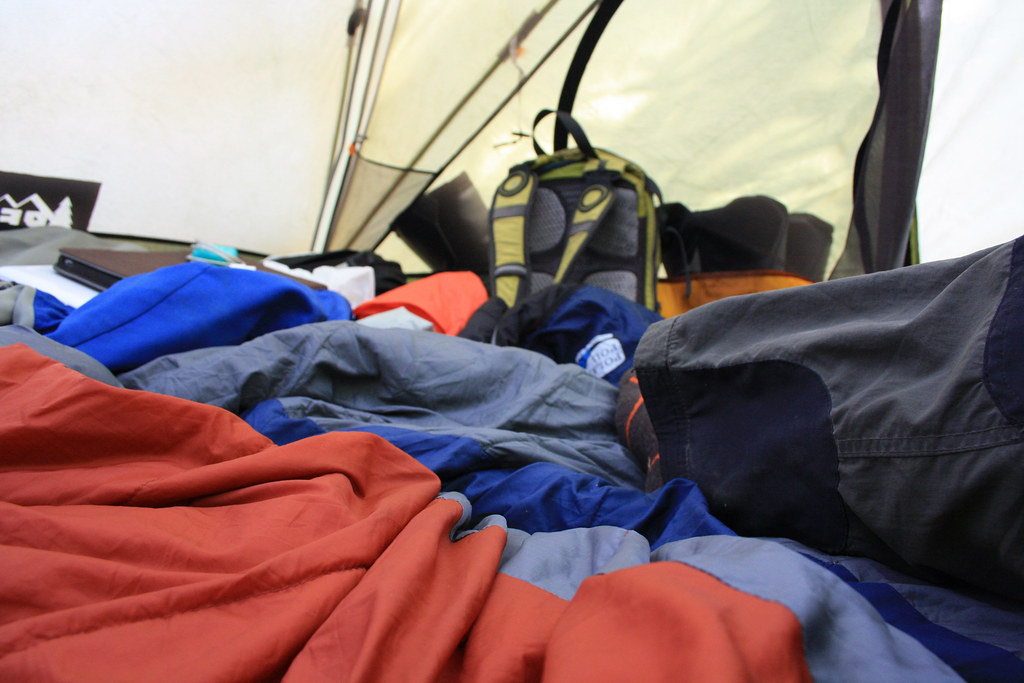 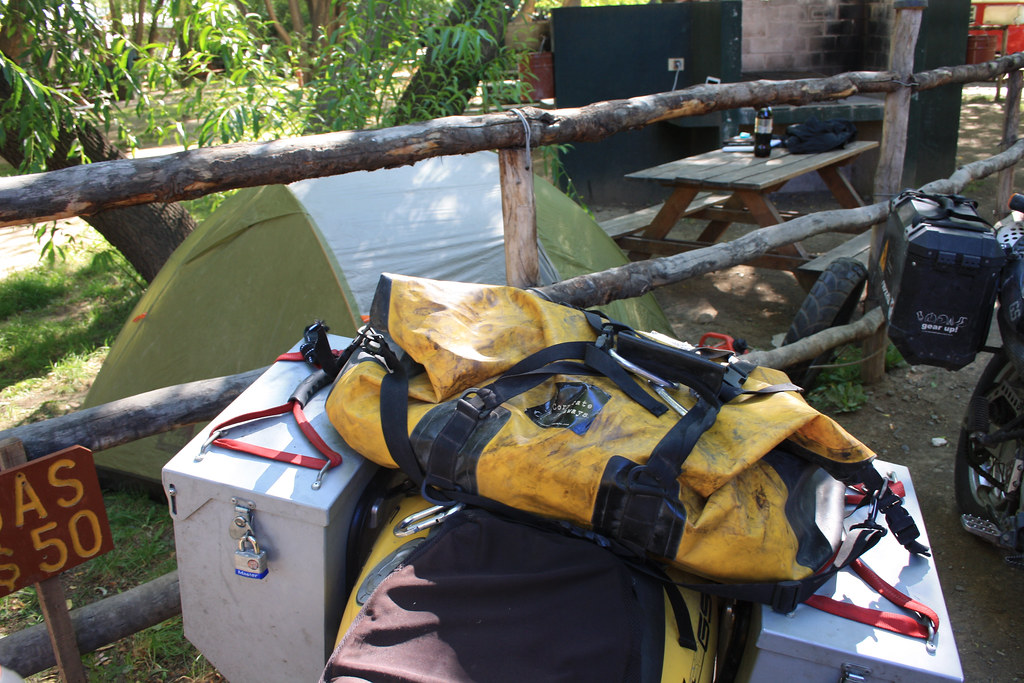 The plan for the day had been to ride over to check out Fitz Roy, a beautiful mountain area around 100km from El Calafate. Naomi and Alberto had told us about it and showed us some pictures, and there were also pictures around town. But we hadn’t been in any hurry to get on the road, and were sitting at the picnic table around 1:30 when a guy came over and started looking over the bikes and chatting with us. He said he had a new F650 of his own, and thinks they’re great bikes. We mentioned that we were pondering going to see Fitz Roy, but he said it was too late in the day for us to go unless we planned to stay there. We hadn’t, and hadn’t realized it was going to take us that long to get there and back, so we pretty much gave up on the idea. I thought maybe we’d go see it tomorrow, instead, since we’re in no real hurry to go anywhere.

Gas station lunch of sandwiches and chips, to save a bit of cash and because we weren’t terribly hungry after breakfast, and then a little wandering around town and poking our heads into shops. Back to the campground, and we saw an adventure bike waiting there! It was Maichek (pronounced “Matt-check”), an Aussie who is spending the next year in South America. He was looking for some friends who he thought were in town, so we only chatted briefly before he headed out hunting them. A bit later, though, and he was back! Apparently he was going to camp here, too.

Kay and I ventured back into town to get stuff to make dinner, since we were at a campground and could actually cook – and set about frying some meat and making some pasta. Kay actually read the stove manual and used the cleaning thing (a magnet) and the stove was working beautifully again, almost like new… until we were boiling water for the pasta. Then it started sputtering and threatening to die again, just like it did the last time we tried to use it – in Palenque. We managed to keep the water boiling long enough to cook our pasta, but I still don’t trust our stove.

Kay’s note: The stove comes with a multi-tool for all the various nuts and such. On that is a magnet. To clean the stove you simply wave the magnet under it. After the meat I just waved the magnet under it again, and pumped the tank more. I’m not sure if it was being clogged or if the pressure had just ran out, but this stove does seem to be less happy than the one we sent back for the recall.

During dinner, Maichek wandered back over to chill with us. He drank some wine and we shared stories. He had horror stories of Routa 40, too (as did Naomi and Alberto) – I swear that road is sheer evil. After talking to other experienced bikers about their troubles with Routa 40, I’d definitely abandoned my thoughts of asking for a rematch. I rode the section I rode, and I’m going to leave it at that. I overcame my little section of it and I’m not such a masochist (nor do I have anything to prove) to tackle more after hearing about all the trouble that other experienced riders have had.

Traded stories with Maichek until I was cold and shivering, and Kay said we need to get me into the tent. And as we’re putting the kitchen stuff away, a couple wanders into the campground who apparently know Maichek – and we discover that the gent was a guy we’d met at the Argentina/Chile border a few days earlier when we were either coming or going to Ushuaia! (Can’t remember which.) He’d done the US and Alaska on a… Honda… Shadow 700? We can’t quite remember the details – I was still wearing my helmet because I’d expected a quick border visit when we first met him, and so I had my earplugs in and Kay was the one doing the chatting. But it was wild that he just happened by our campground, and we chatted a bit more about the trip, the bikes, waterproof gear that isn’t… all the things bikers chat about on the road.

I was quite chilled by the time we got me into the tent, but it was a good night of chatting with new friends. And a surprisingly awesome day of doing nothing. This is much better than killing time in Buenos Aires, methinks.