Didn’t particularly want to get up this morning because it was cold and I just wanted to stay inside the sleeping bag, but Naomi and Alberto were heading out to the glacier and then off to Chile, so we wanted to ride with them to the glacier and didn’t want to make them late getting to Chile. So Kay went off to shower while I wandered off in search of an ATM. One ATM out of cash, but five blocks further into town I found some money. Yay money!

Back to the campground just in time for the restaurant to open, and the four of us go to have some omelets. One nice thing about being in a touristy town is you can find breakfast places that serve more than just bread. The omelets were a bit… odd… too salty, I think, but it was so nice to have eggs for breakfast again that we weren’t about to complain.

Breakfast took longer than expected, and Naomi and Alberto had to pack up their tent and everything since they were headed off to Chile afterwards, so we got on the road to the Perito Moreno glacier shortly after 10AM. 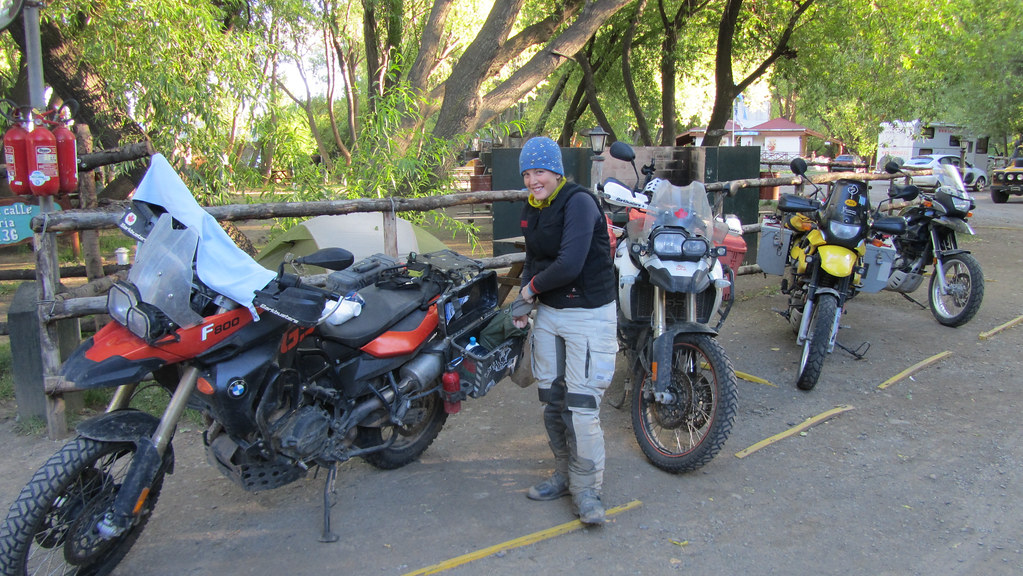 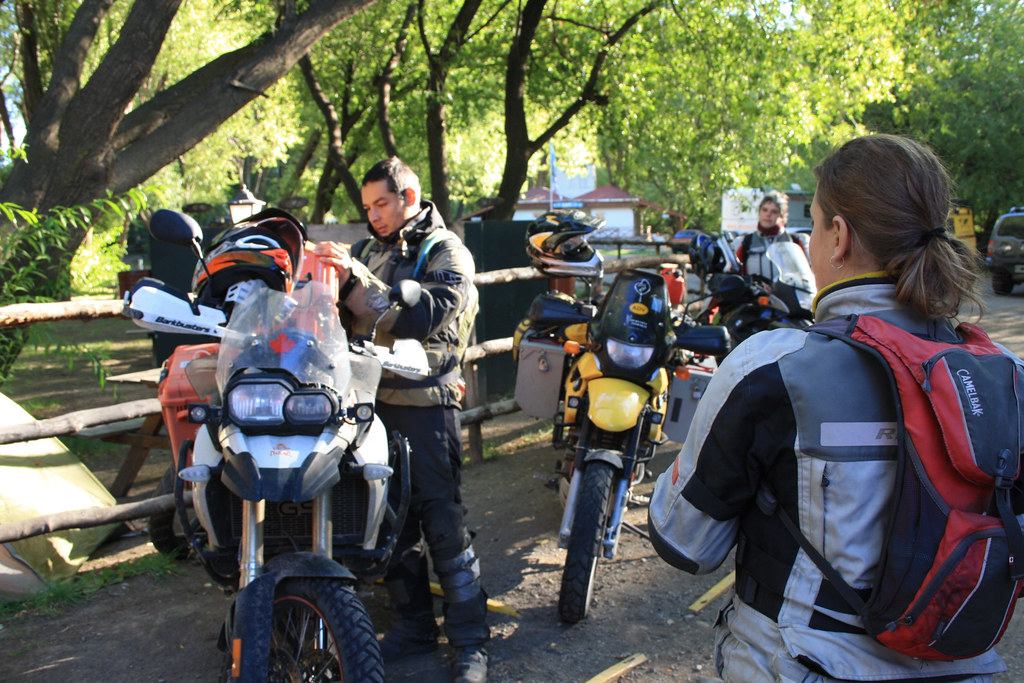 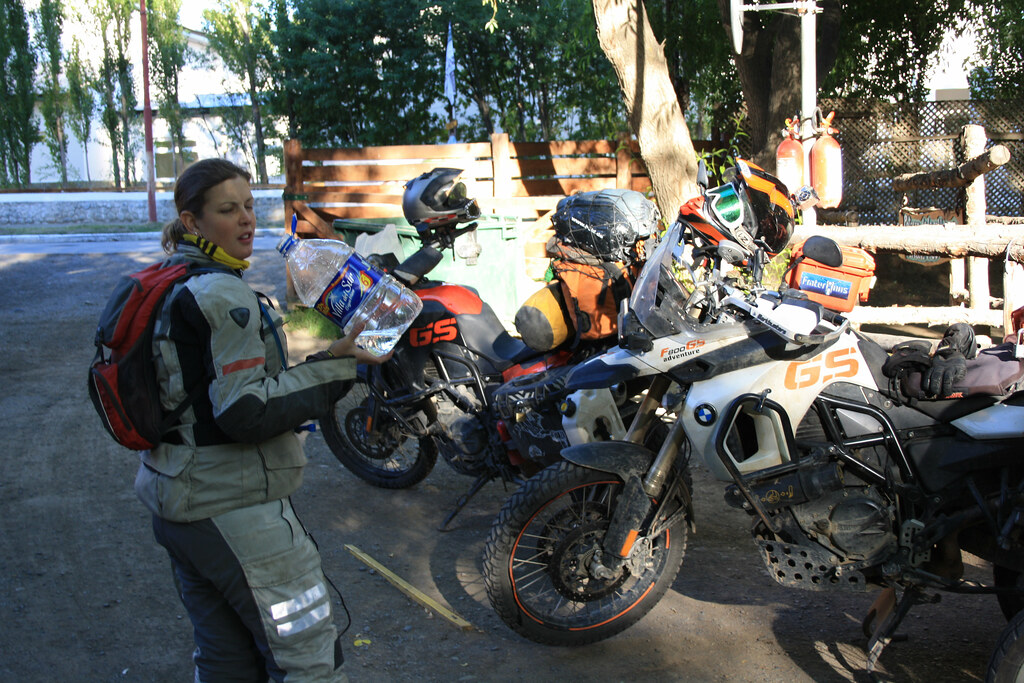 Luckily it was sunny and beautiful, so we were optimistic about getting good views of the glacier. $25 per person to get into the national park, and a 35k ride down a twisty, but paved, park road to the parking lot. From there, you board a shuttle bus to the glacier visitor center and can walk around on a multi-level walkway with lots of stairs and balconies to view the glacier from different angles. Unfortunately, along the way, the sun was hidden behind some clouds and there was a smattering of minor rain.

When we walked out onto the walkways and could really see the glacier, it was immediately apparent that the glacier completely dwarfed any sense of scale we could imagine. It was massive. Beyond comprehension massive. At one point, Alberto observed that this glacier we were seeing was just the tip of the ice field spilling over, and was probably something like 1% of the total ice, and Naomi pulled out the map so we could look at the massive ice field. We all agreed that it was mind-boggling and really too large for us to wrap our heads around.

We stopped at several different balconies on the walkway to get different angles of the glacier. Much of the ice had a blue-ish tint because the ice compresses over time and the oxygen somehow ends up getting… compressed out? I’m not sure exactly, but it had an otherworldly tint. The top edge was raggedy and you could see thousands of crevasses. It looked deadly and alien… and yes, like something out of a movie set. It didn’t look real. 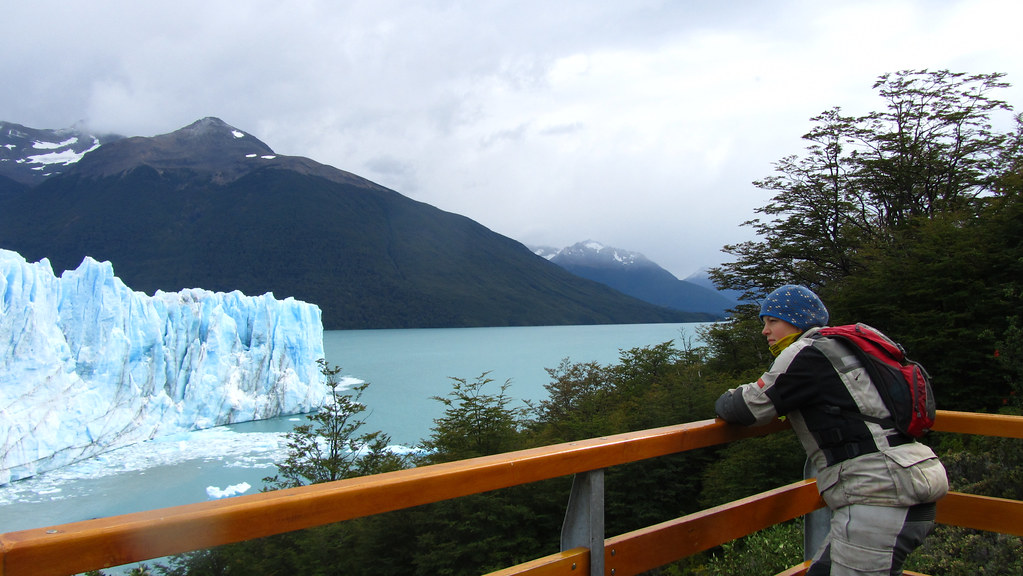 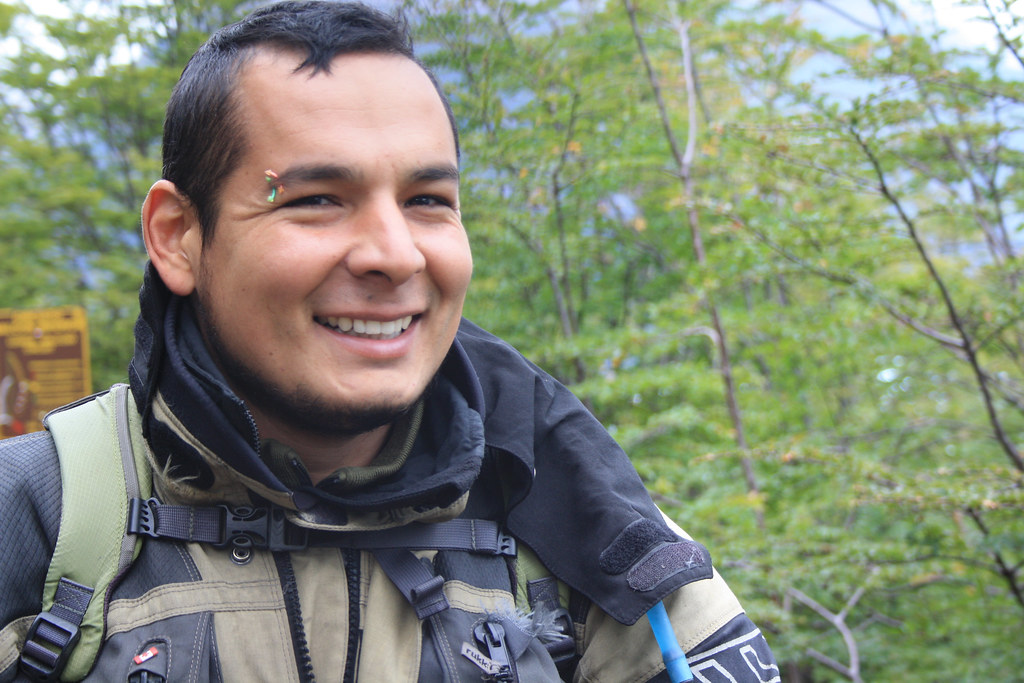 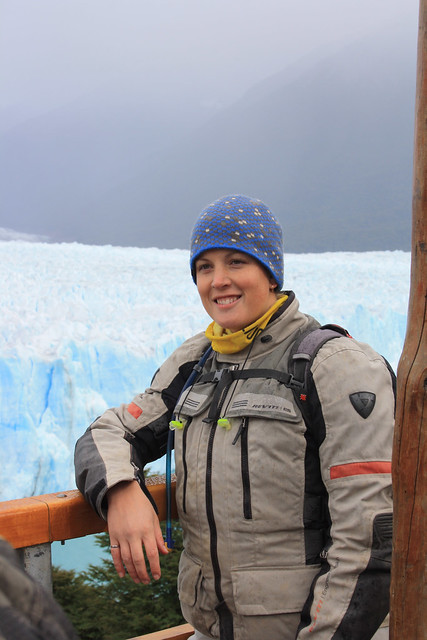 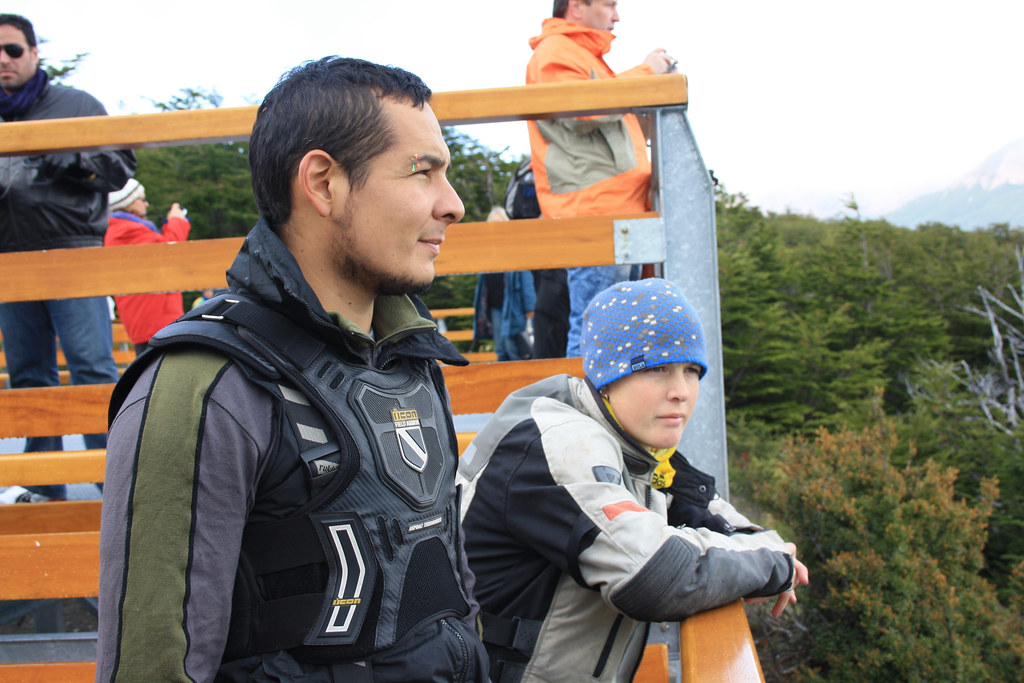 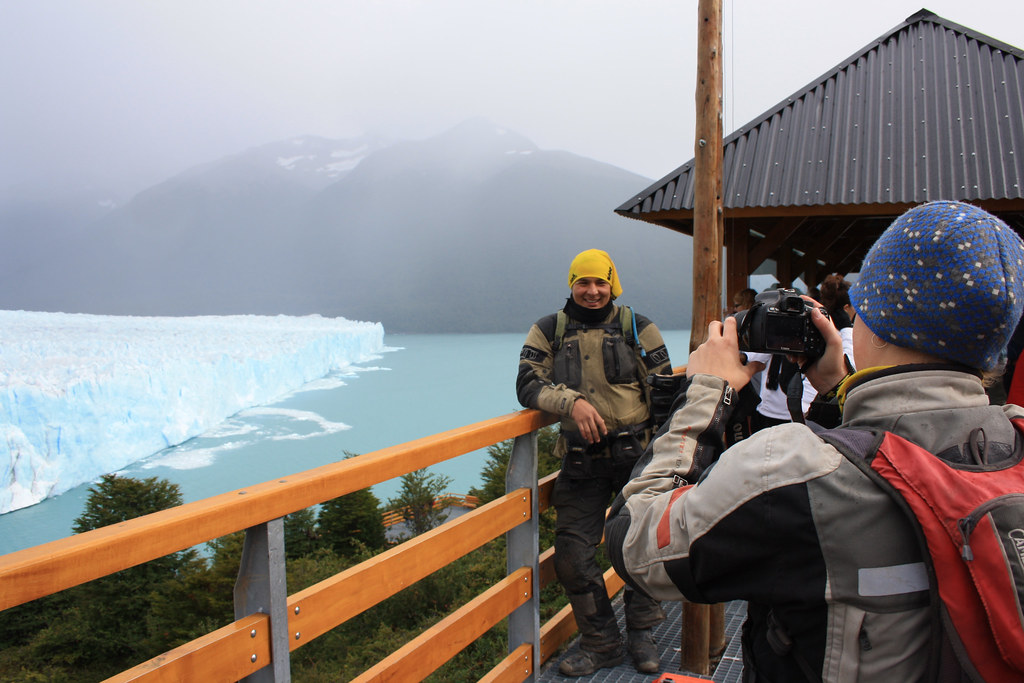 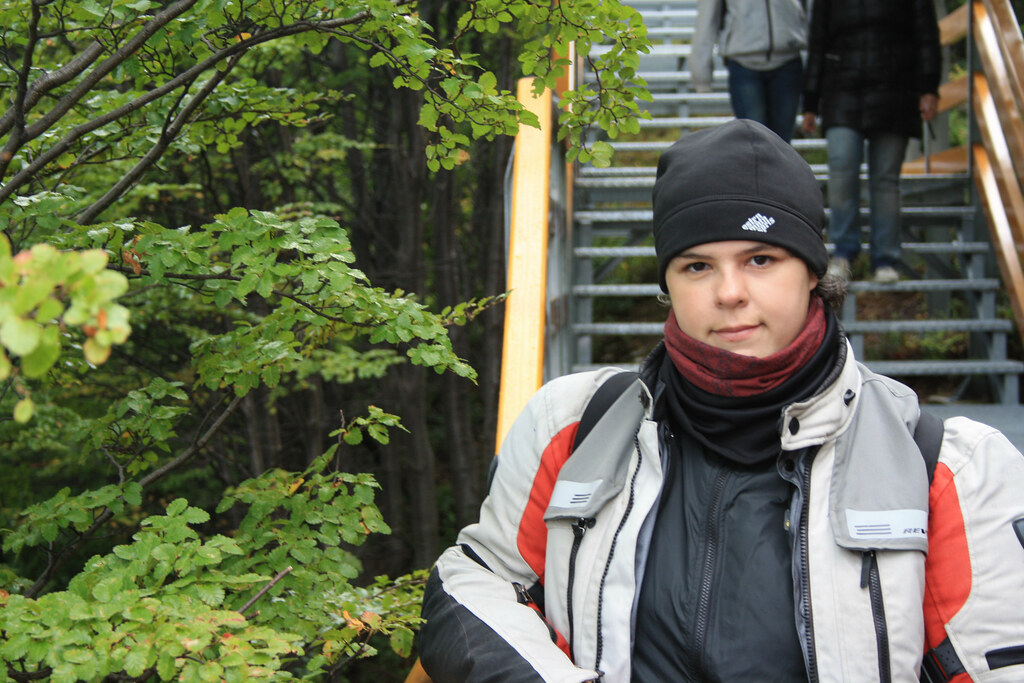 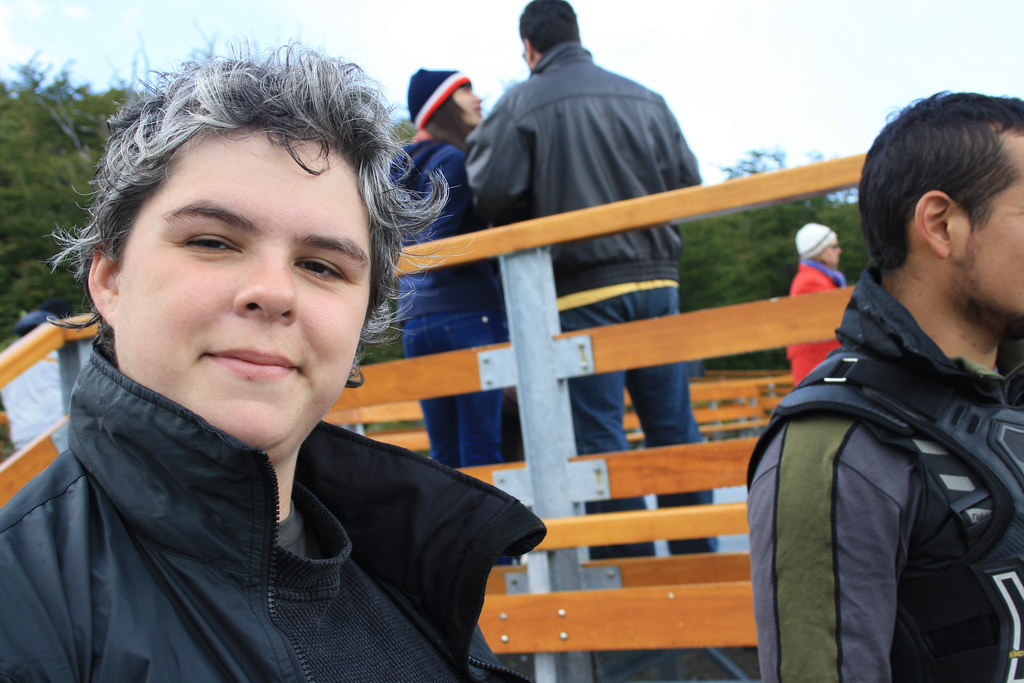 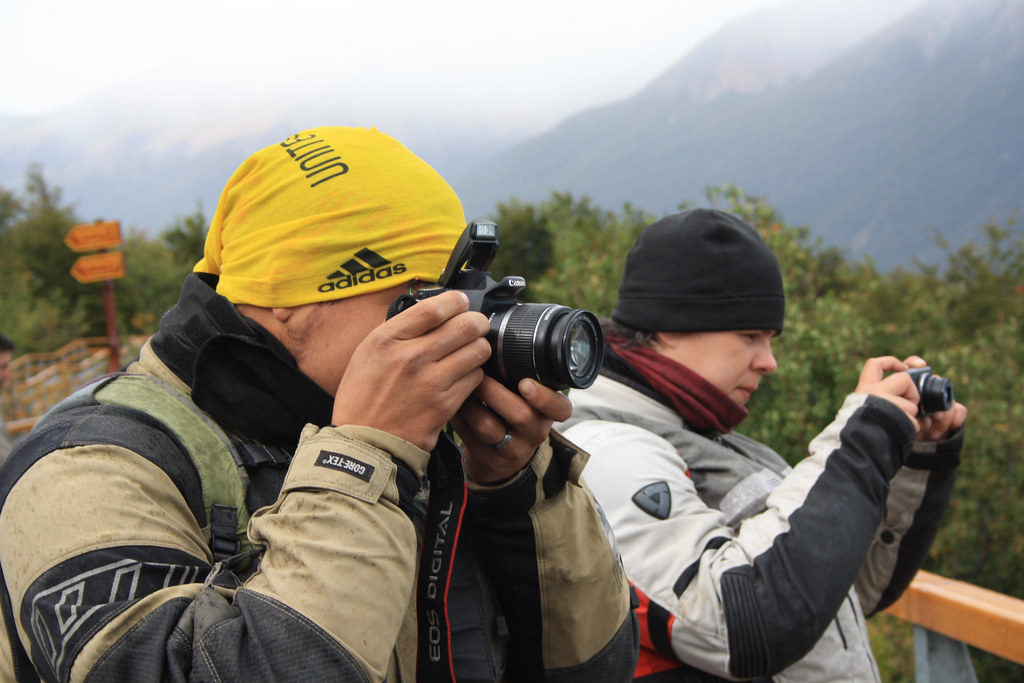 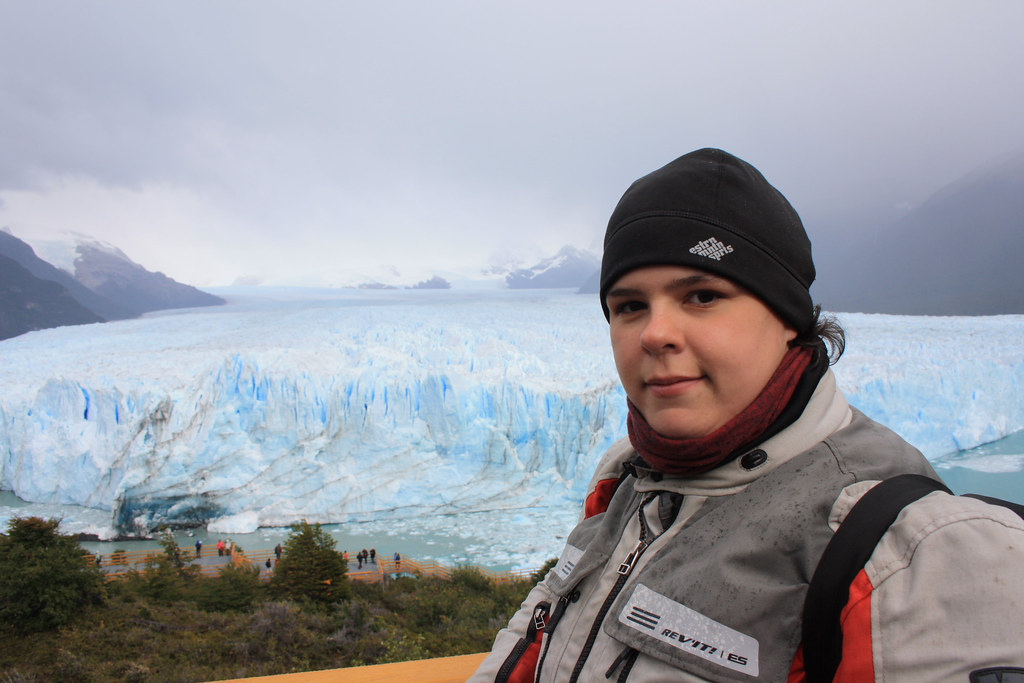 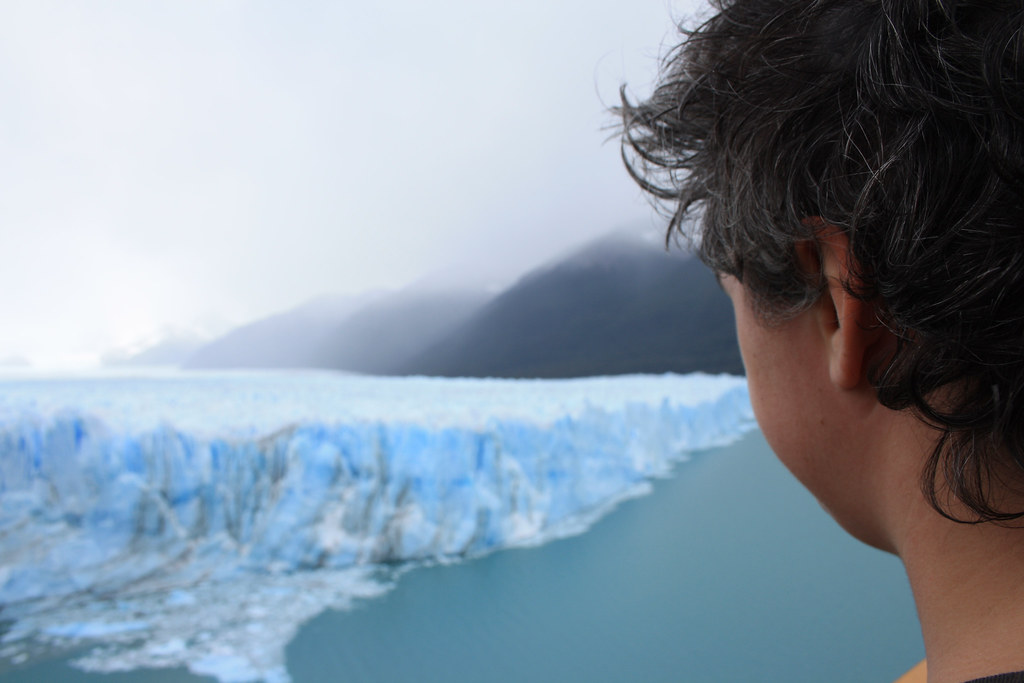 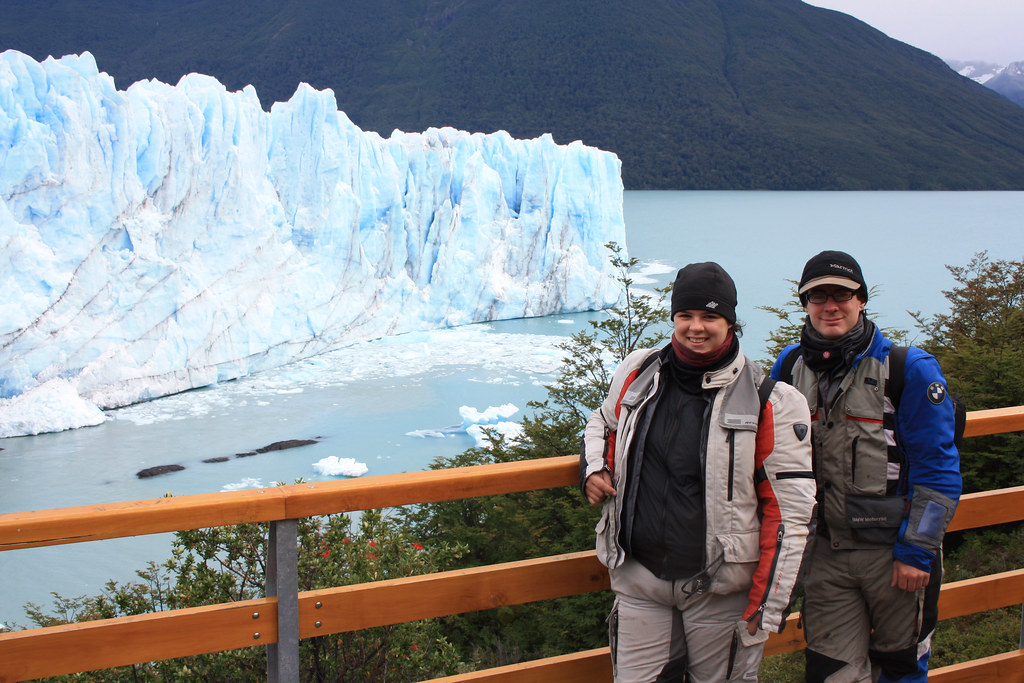 We saw one spot where the ice was clear and had a deep blue tint, with a darker black around it… I have no idea why the ice did that but it was very distinctive, and seemed to draw the eye no matter where we were. 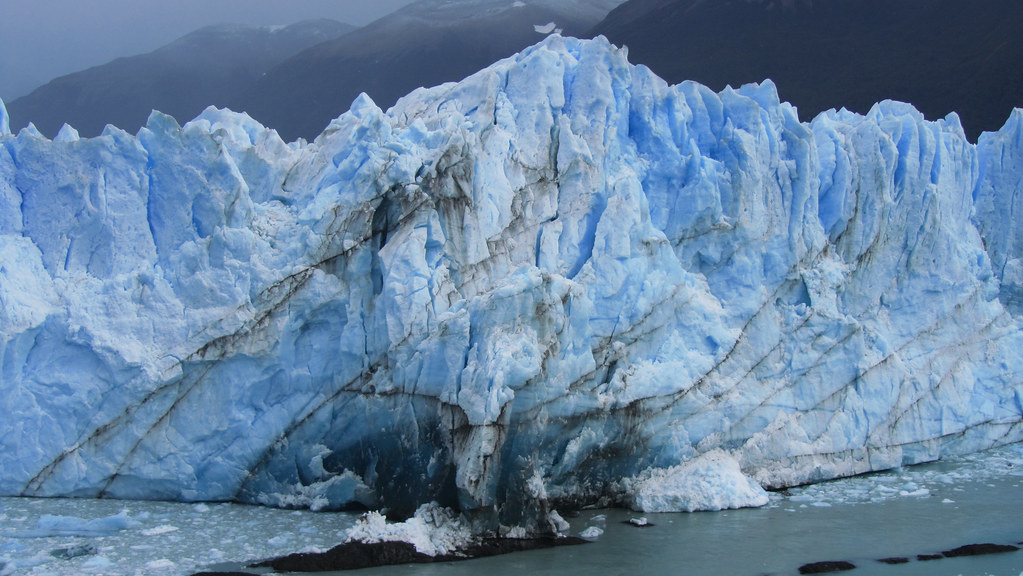 Moving around to different balconies, we eventually settled on one that was overlooking the right side of the glacier as we were viewing it, as that’s where we’d heard all of the crashing sounds from (but hadn’t seen much of the ice falling). We went over to that side and stood around for a while, taking gratuitous shots of us in front of the glacier (including some RevZilla love…) 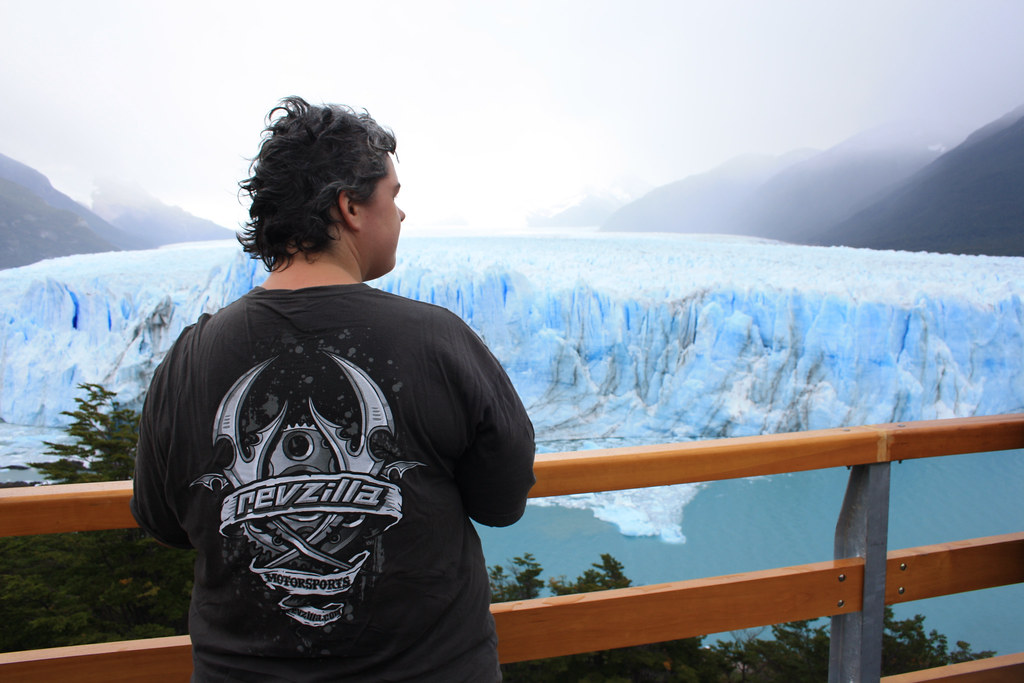 … when some of the ice just started crashing off. It was insane. It was a massive chunk of ice, following a couple of smaller chunks. It turned out to be one entire part of the glacier face, from top to bottom – the scale is really difficult to understand but the splash itself was like an explosion. It was a really impressive break.

Kay’s note: I was ready with the good camera and got an amazing sequence of the face falling off in three sections with the whole splash. We’ll have to upload it later though because it’s another 200 Mb worth of images. 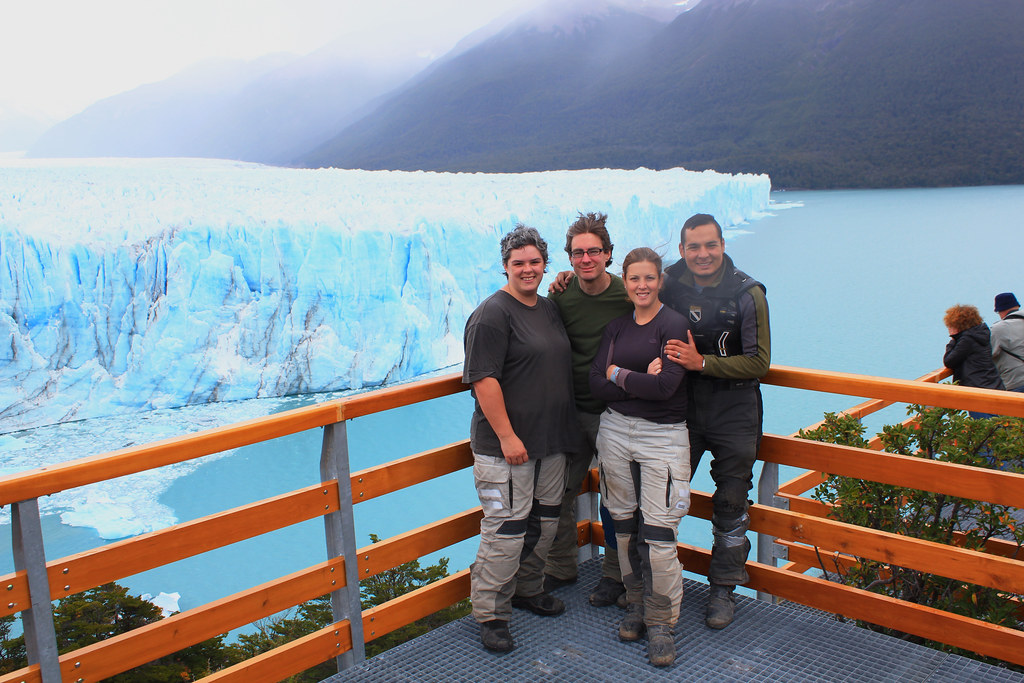 We waited around a bit after that, but nothing else broke. So back to the visitor center for a quick bathroom break, and contemplate having coffee. Unfortunately the restaurant was super crowded and Naomi and Alberto were heading off to Chile, so we opted to skip coffee and get back to the bikes. We had to wait for a couple of shuttle buses to come as they filled up too quickly and there wasn’t space for us, but we got on the second one and made it back to the parking lot where our bikes were stashed, only to find that it was still raining in the parking lot. At least it had gotten sunny while we were viewing the glacier!

The surrounding scenery is quite nice, too, though… 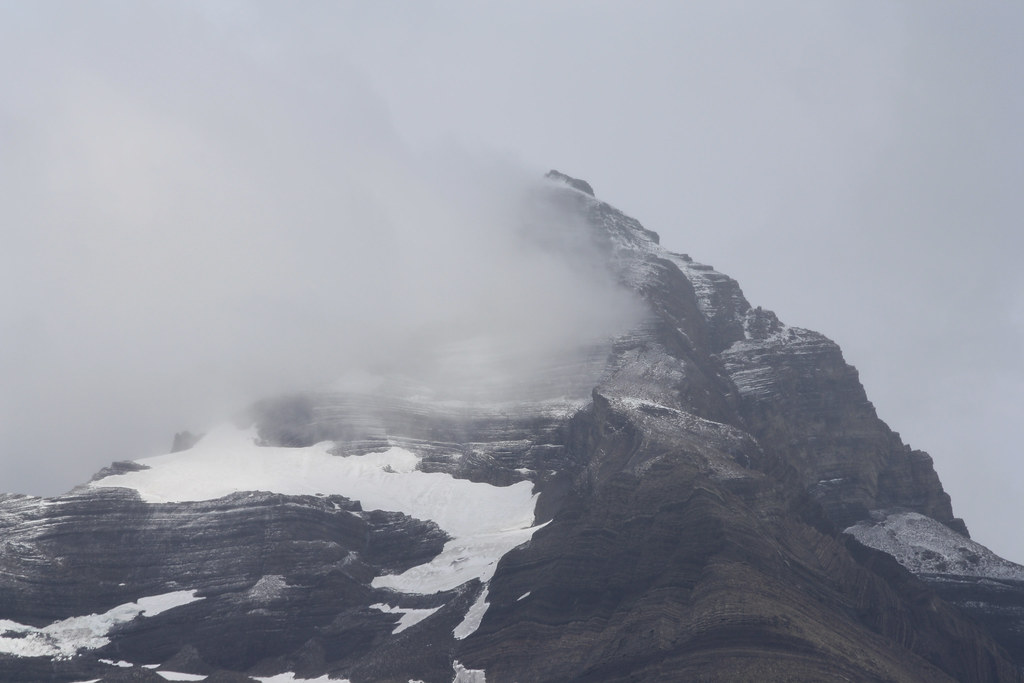 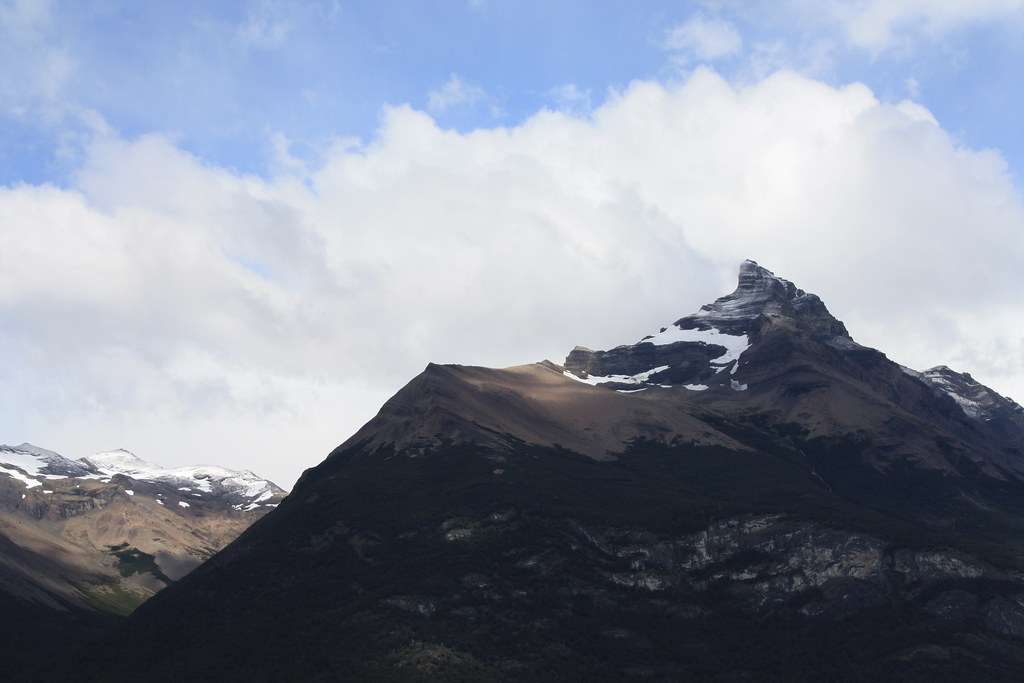 We told Naomi and Alberto not to wait for us, as we always take forever to gear up when we’re wearing this many layers for the cold, and we knew they were pressed for time to get to Chile. It was already shortly after 2pm, and they had to head back to El Calafate for gas before riding roughly 250km and dealing with a border crossing. So off they went, and Kay and I took our time getting back to town. 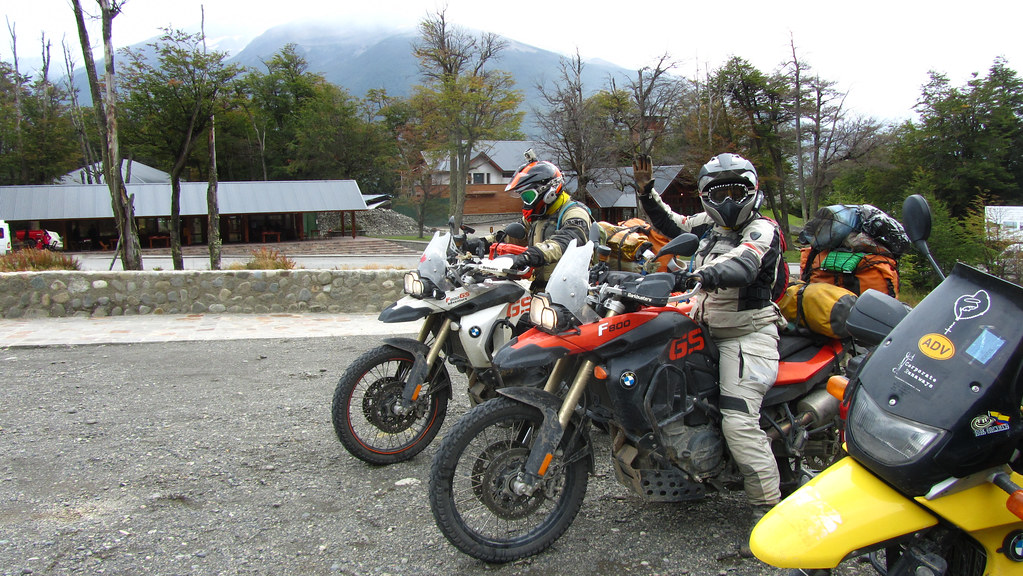 We stopped for gas and then headed back to the campground that Naomi and Alberto had recommended (where we’d left our tent), as we’d decided to stay a couple more nights since we have time to kill and this seems like a nicer place to kill time than Buenos Aires.

And much to our surprise, there were two fully-loaded F800GS adventure bikes sitting in the parking lot! Naomi and Alberto had gotten back to town, decided it was too late in the day to get a good start for Chile and decided to stay here another night. So we got to hang out with them more!

Went back to the place Kay and I found for lunch yesterday where we had a nice, long, relaxed lunch. We got lomito sandwiches, which were super tasty, but the fries were sadly much more greasy than they were yesterday. Naomi and I ordered hot chocolate, which was wonderful… it was like real, rich, melted chocolate in a glass – not like some powder or the partially-melted chocolate flakes in hot milk I had the other day. It was glorious. Good food and good company made for a very happy meal.

After lunch, Alberto headed back to set up camp again while Kay, Naomi and I went scouting grocery stores. Naomi and Alberto actually cook things and camp more often than we have, and they wanted something breakfasty (oatmeal is a good one they seem to like) but were having trouble finding. Two grocery stores and we found some oatmeal and stuff for dinner, and Kay and I finally got our Routa 40 stickers and we also got some patches. We’ve also deeded our egg holder thing from REI to Naomi and Alberto, because they might actually get some use out of it and we’re almost done with the trip and have never taken it out of the yellow bag. Hopefully they’ll get more use out of it!

Back at the campground for updating the blog and looking at pictures of the glacier (far too many) and it’s getting a bit chilly. Hopefully tonight won’t be too much colder than last night! But it is nice to camp and chill for a few days… now that we’ve already done Ushuaia, we’ve still got almost two weeks to kill and no real “goal” so we have time to revisit some of the things we’ve skipped along the way and take our time dawdling back to Buenos Aires.