We got a surprise e-mail from Naomi with directions to the campground in El Calafete where we were headed, and they were staying.

We were pretty bundled up against the cold and the rainclouds we saw off in the distance, and the road was a lot more of the same we’ve been seeing lately so there wasn’t much to note from the early riding until I asked Dachary how she was doing and she responded that she was “… trying to figure out if I’m getting shocked” … “O… k…” That’s not good. I’m imagining some intermittent little shock being delivered from her electric jacket until maybe ten minutes later she tells me to pull over. She never tells me to pull over so I’m pretty concerned.

She says she can’t deal with the shocks any more and describes it as a “… sharp stabbing pain…” and pulls up her shirt to expose a line of red unhappy skin on her belly. This is not good. We need the electric jackets to keep from freezing. Dachary grabs her lightweight Buff, folds it up and shoves it up under her shirt on top of the red aggravated area, which appears to be at the same place as where the wires come in to the jacket… hmm.

We drive on and that seems to have done the trick, although neither of us is happy about it.

Eventually we get to a gas station about 90 miles down the road, in the only town likely to have one between here and our destination. Of course, it doesn’t have gas. We won’t make it to El Calafate, or… we wouldn’t if we didn’t have our spare gas canisters, which, at highway speeds, will give us about 90 miles each… just about the amount missing from our tanks now. So, with some serious bitching at the safety devices in the spout we eventually get both bikes topped off and go in for some warmth and lunch… of course, the place isn’t warm, and the lunch is cold ham and cheese sandwiches, but they’re food… Dachary stops in the bathroom to put on a few more t-shirts to insulate her from the shocks instead of keeping a wodged up Buff under her shirt.

We eventually get sick of not getting warm, head out, and finish gearing up when a guy swings around asking if his wife can take a picture of him next to us and the bikes, which we happily oblige.

We then set off into the rain that finally caught up with us in force at the gas station, and then ride right out of it maybe fifteen minutes later… Oh yes. Joyous sunlight, getting stronger by the minute.

Soon, we’re approaching El Calafate and it’s getting more and more scenic by the minute. There’s a scenic overlook with a bird of prey hovering on the updraft barely even twitching its wings as it watches for prey. 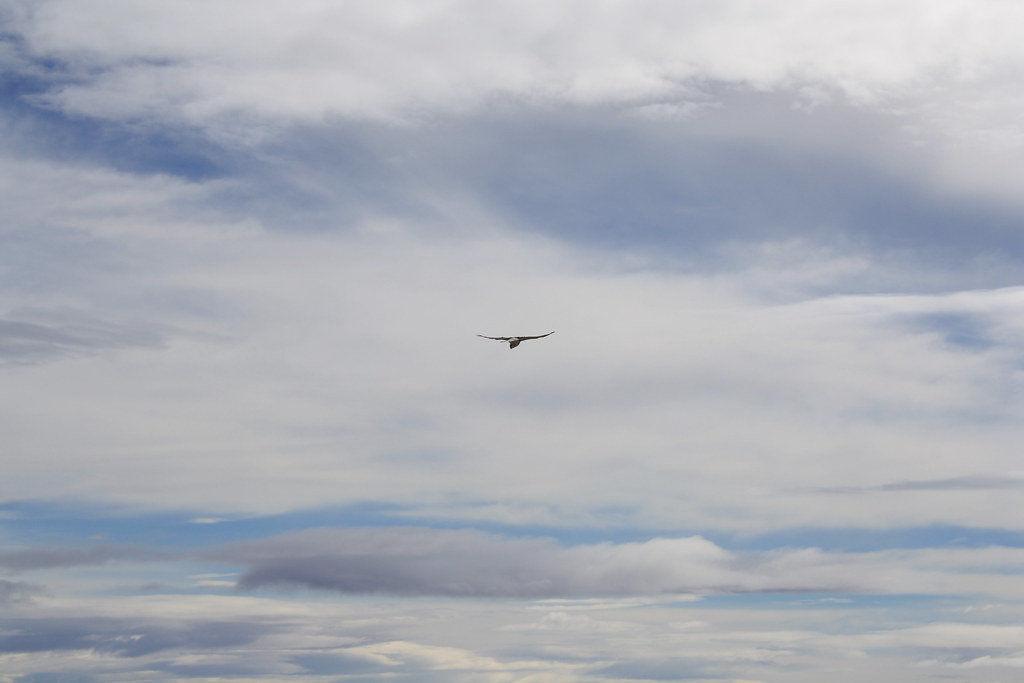 (Click through to the large version to see the full panorama) 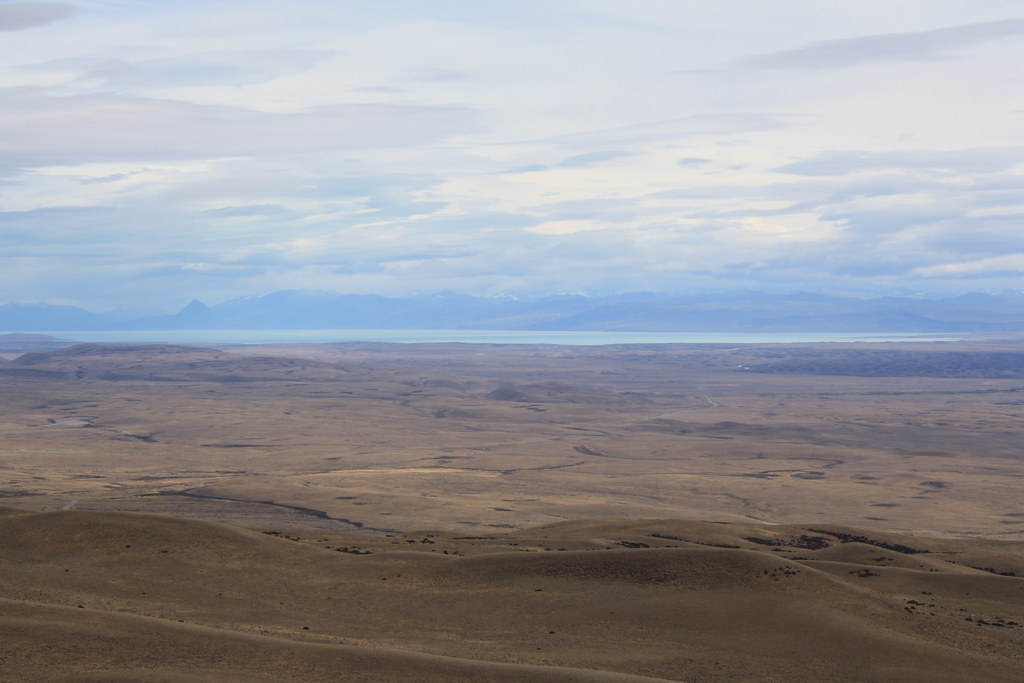 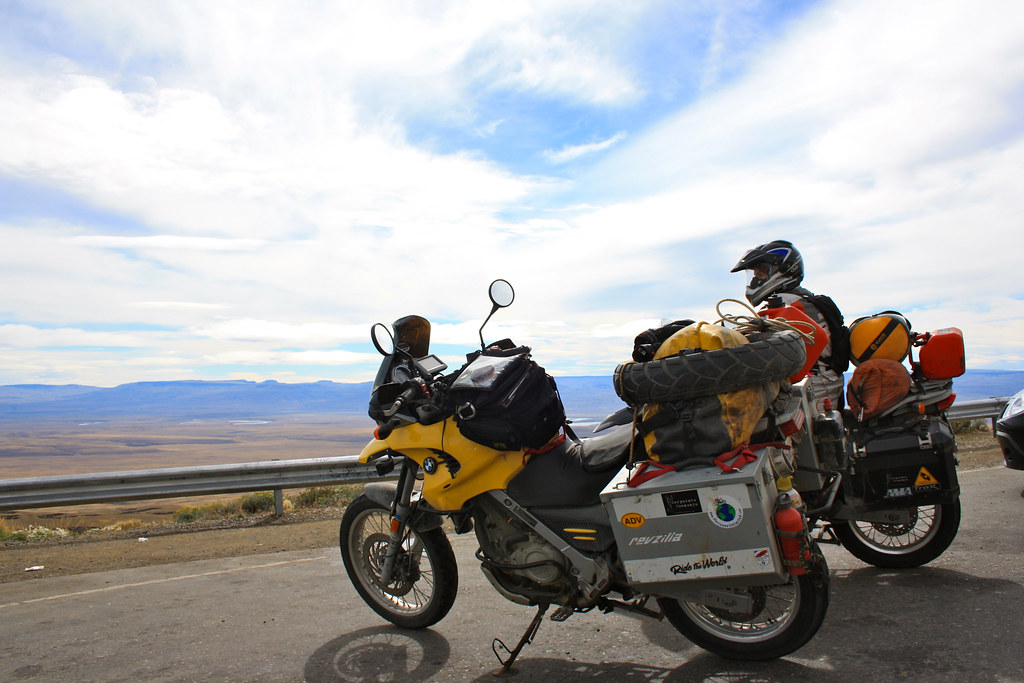 It gets better ever mile we go forward. The lake is fantastic and mountains start rising up in the background until we’re turning down into El Calafate, where we stopped at the gas station (because who knows if there will be gas tomorrow), then pull over to unhook our gas cans for a refill when Naomi shows up on her way to find a new lock. Excellent.

We chat for a bit then head off for lunch where we find a place that’s a) open b) has good burgers and c) excellent cappuccino. Very nice.

We head over to the campground, set up start chatting and are generally happy to have finally met Naomi and Alberto after so many emails back and forth. Naomi, Dachary, and I head out to the grocery store just down the block to procure some meats and veggies to grill for dinner.

Dachary’s note: I’m also sick of having cold arms on the bike, so I decide to look for a long-sleeved shirt, of which I have zero. I’ll take a t-shirt, but a sweatshirt would be even better for its insulating properties. I’m pretty sure El Calafate will have something, because it’s a big touristy town and I’ve seen someone wearing an El Calafate jacket at the Chile/Argentina border. So while we’re wandering around town, we poke into a few shops, and eventually find one that has some long-sleeved thin sweatshirts…

I find a gray Routa 40 sweatshirt and am ready to buy it, when Naomi and Kay spot a “waffle shirt” that seems to be made of the same material of the old-fashioned long johns. They both agree that the waffle shirt will be better insulated than the thin gray sweatshirt I want, and I lament that it doesn’t say “Routa 40” and Naomi offers to draw the Routa 40 crest on the shirt. But I concede to wisdom and buy the waffle shirt instead, and immediately put it on – and comment repeatedly throughout the night that I’m so nice and toasty warm with my lovely waffle shirt. It was a great purchase, even at $63 US… I just wish I’d bought it sooner.

Back at the campsite, grilling commences. Plates are filled, and the chewing commences, and continues for quite some time. It’s a shit cut of beef and almost every piece I have involves chewing for two minutes then spitting out the unchewable remainder. The choirizo and onions decent though.

Good to be amongst good people again. 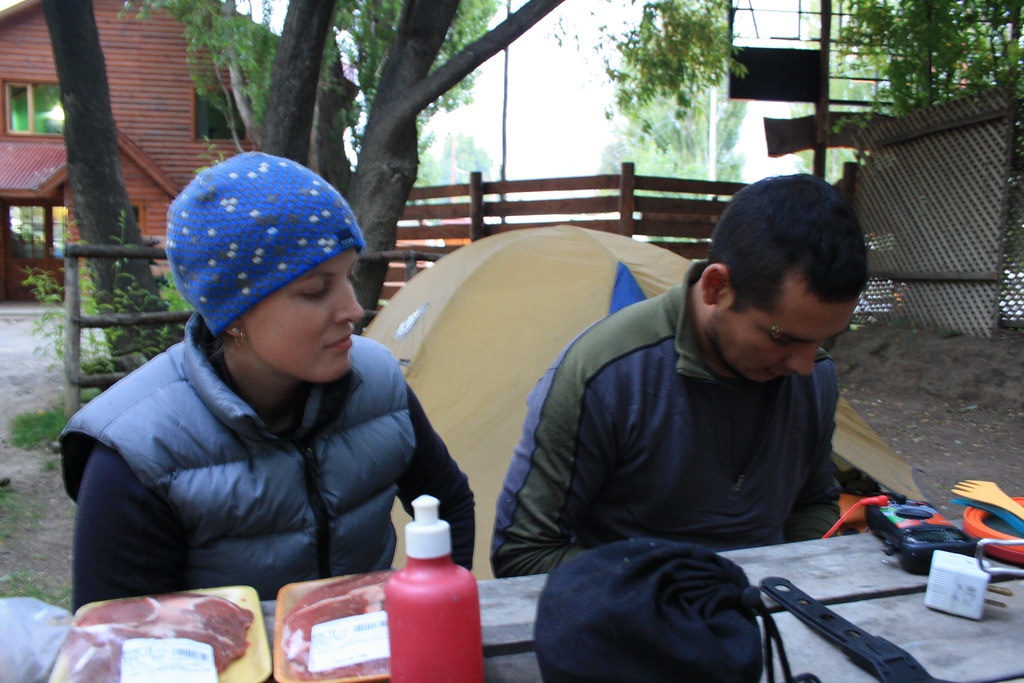