Breadfast initially consisted of yesterday’s leftover rolls at the restaurant. I went and asked the lady if they had any croissants, since, while we may not be a fan of Breadfast we do enjoy the Argentinian croissants with a bit of sweet brushed over the top. “Oh, yes. I’ll go across the street and get them.” Across the street being the delicious bakery.

Breadfast was much improved upon her return as neither of us was interested in the leftover rolls.

We hit the road around 9:30, which is pretty good for us, and both hoped that maybe, with a good start, and a little luck at the borders, and dry dirt we’d be able to make it beyond Rio Gallegos today. Dachary was hoping for El Calafete, which is another 250 kilometers beyond Rio Gallegos, but I never really thought we’d be able to pull *that* off.

We both agreed that while we’d ridden the same roads on Day 97 it was far more beautiful when it wasn’t raining.

More llamadeer, a couple more not-emus, and generally excellent dirt which Dachary went nearly 70kph on the whole way (except when the gravel got thick at the corners). Just after the Dirt began the Chileans insisted we fill out the same damn form for the bikes that we’d filled out the last two times we’d entered the country. So annoying. We don’t understand why they can’t just pull our info from the last time they entered us into the computer.

We stopped for lunch at the same place we ate with Joe and Vern last time, and had some delicious roast beef. We also split the marrow from the bone Dachary got and both agreed it was very tasty. I, however, also decided that it was way to disgustingly jiggly and squishy for me to eat again unless i was reeeeeally hungry. But, I had to try it.

Lunch wasn’t quite the same without the boys though. And, the ferry charged us this time: 4,200 Chilean pesos per bike.

Dachary’s note: riding this route in the sunshine was almost like a completely different experience. It was overcast and raining last time, but the sunlight cast a completely different light over the scene and really highlighted the beauty of this part of the world. There are practically no trees – just short scrub – and it’s a lot of flat with gentle rolling hills thrown in, but in the golden sunlight, the landscape really shines. Was a world different from the other day, and much more pleasant. 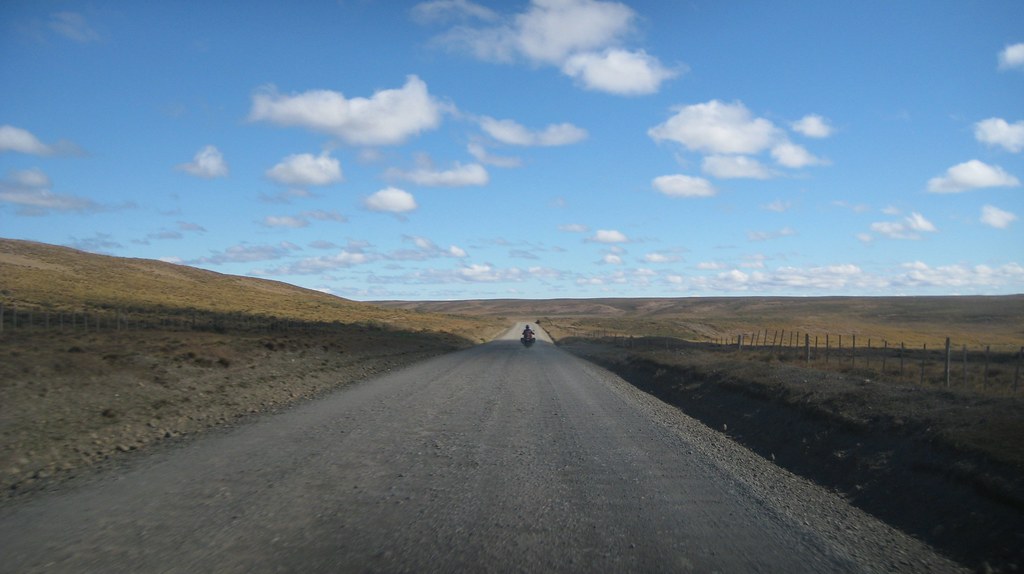 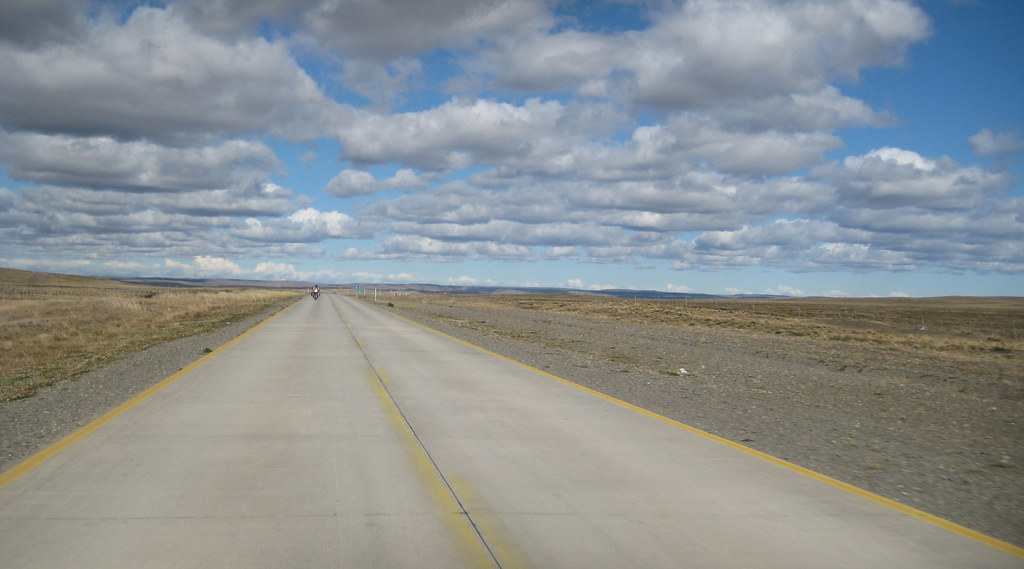 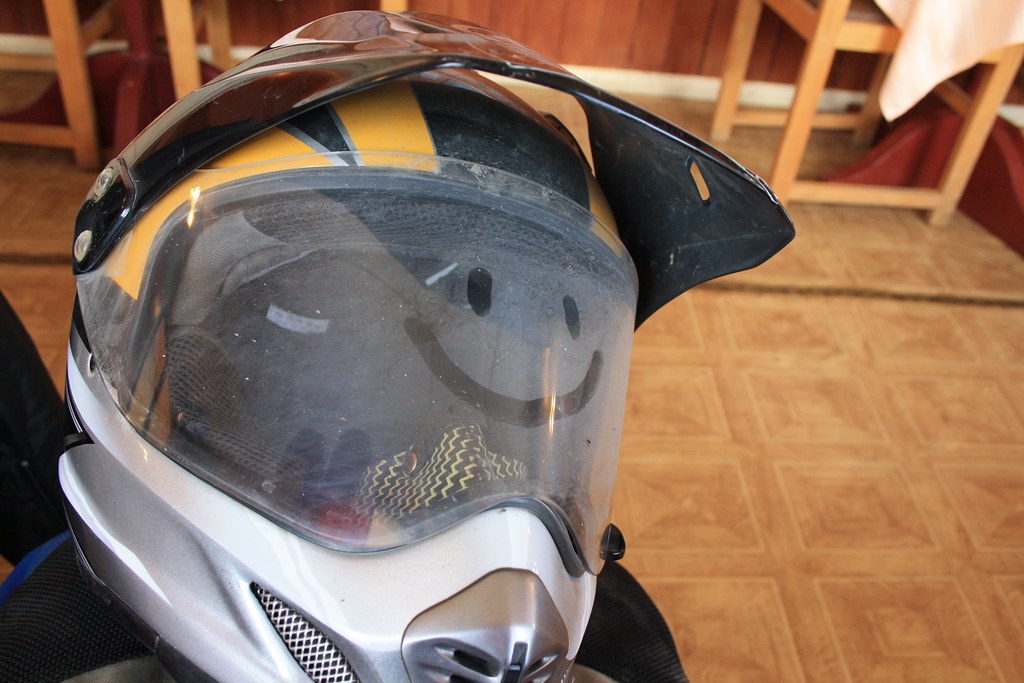 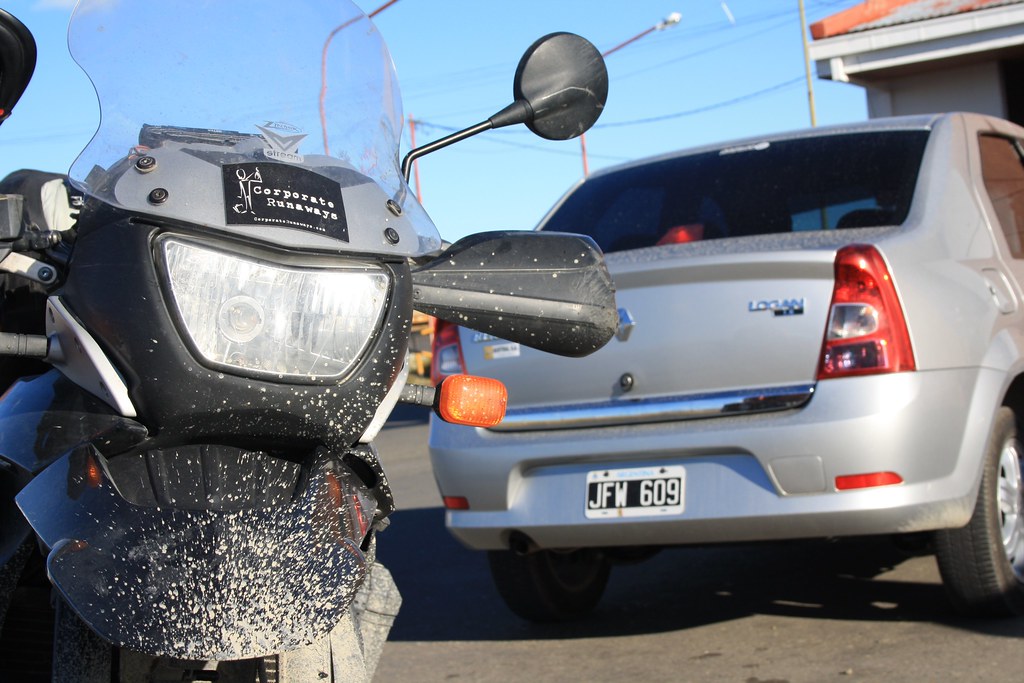 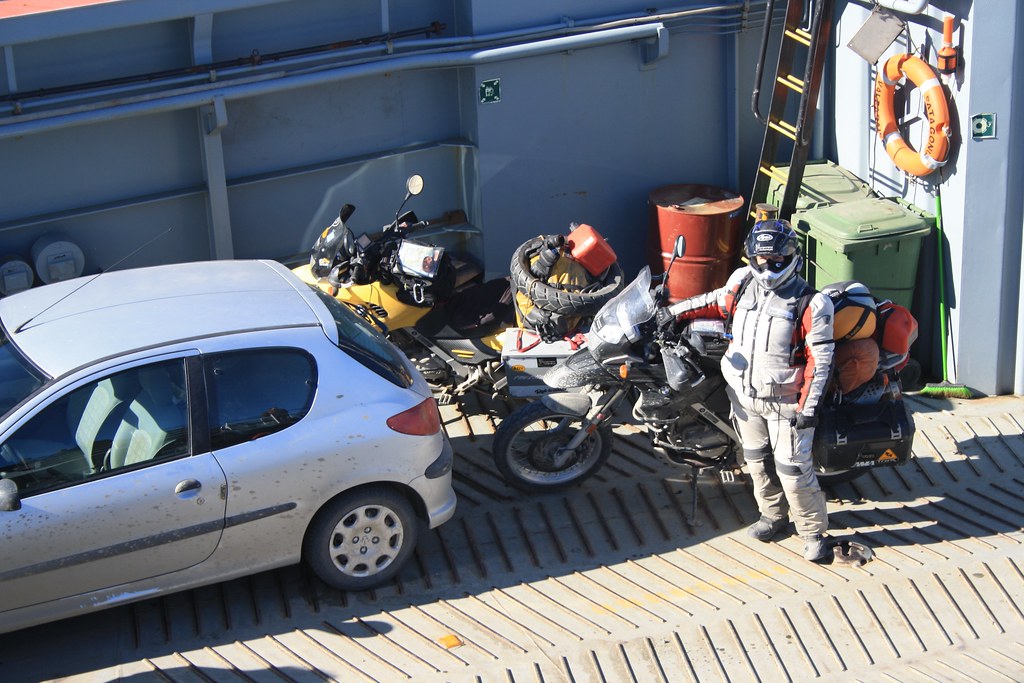 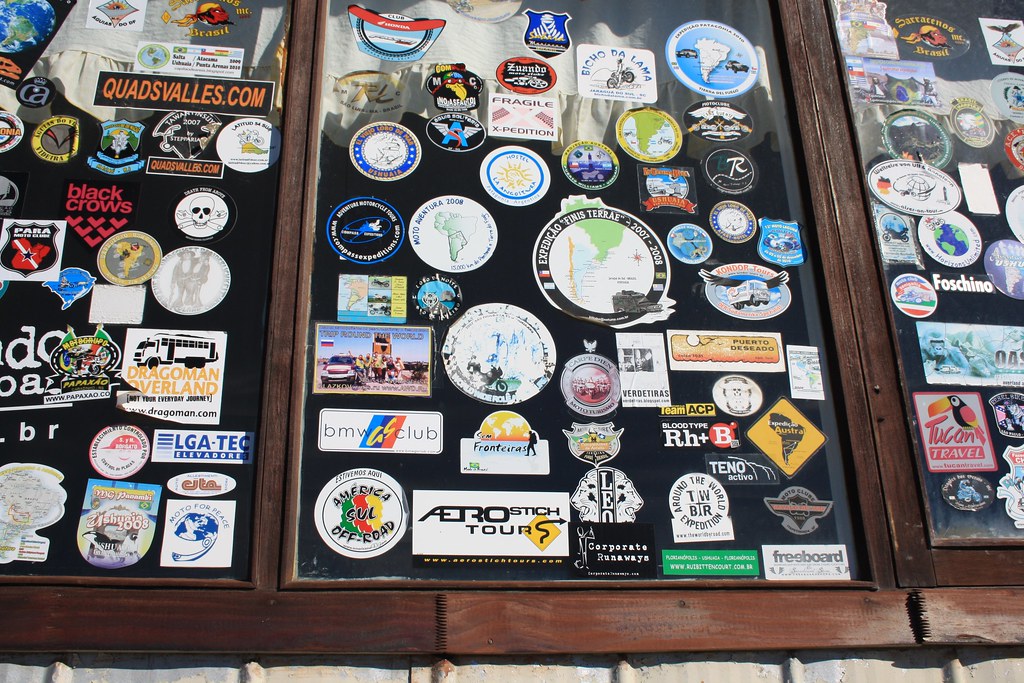 Another long line at the border, but nothing compared to entering Costa Rica so it didn’t really bother us, although we could have done without the six year old girl who, judging by the way she threw herself and her ball across the floor the whole time we were in line, was probably high on speed… or cocaine. It’s hard to tell at that age.

Entering Argentina again was slightly exciting in one aspect… it was our last real border crossing; according to Dachary “Airports don’t count”.

But somehow all the borders and miles, and dirt added up to us rolling into Rio Gallegos a little after 7:00 PM. So… no going to El Calafete. The Hotel Paris which we stayed at last time had only one room left, which had no private bath, and after declining to subject herself to the “shower” in last night’s bathroom (can’t blame her) Dachary had declared that she wanted a shower and didn’t want to deal with showing her bootie to the hall.

So we went down the street. Same deal. So we went down the street. I’m not sure what hotel we’re in but the twin beds are even smaller than the teeny ones we encountered before, and the whole place smells like old-people, cigarettes, and something we can’t quite place, costs 220 Argentine pesos, and doesn’t include Breadfast. Fortunately there’s a window with a breeze in our room. Unfortunately there’s a bidet in the shower… like IN the shower. I was sitting on the toilet, pulled back the shower curtain out of curiosity to see what we’d purchased for ourselves and felt like I’d suddenly interrupted the bidet just before it had finished.

There is space to shower, but if you really really want to get clean fast you can use the bidet and shower at the same time. 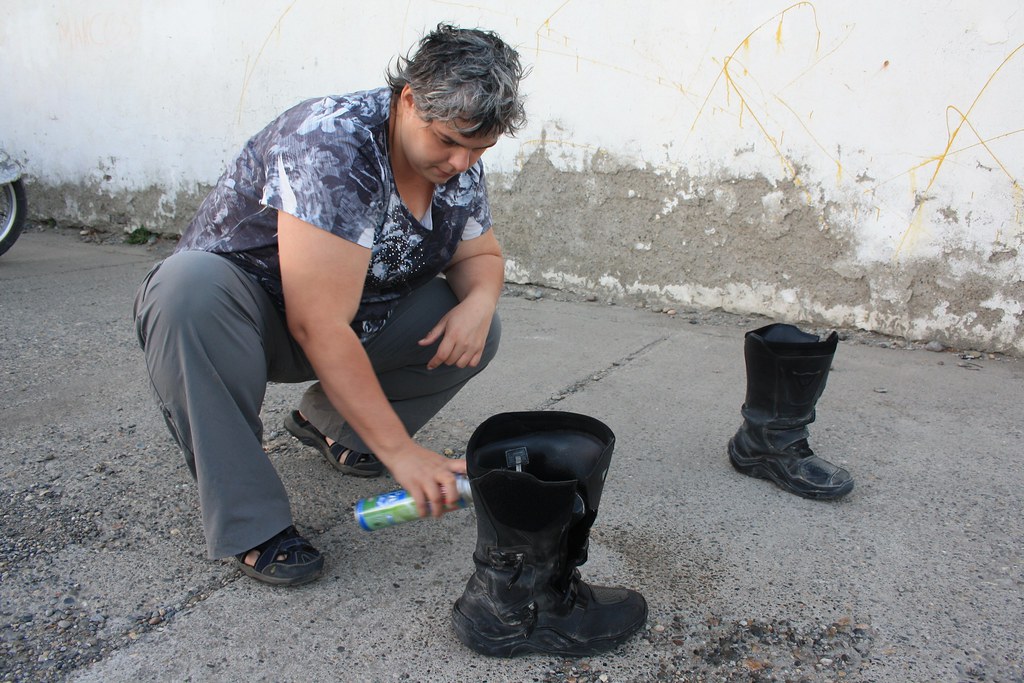 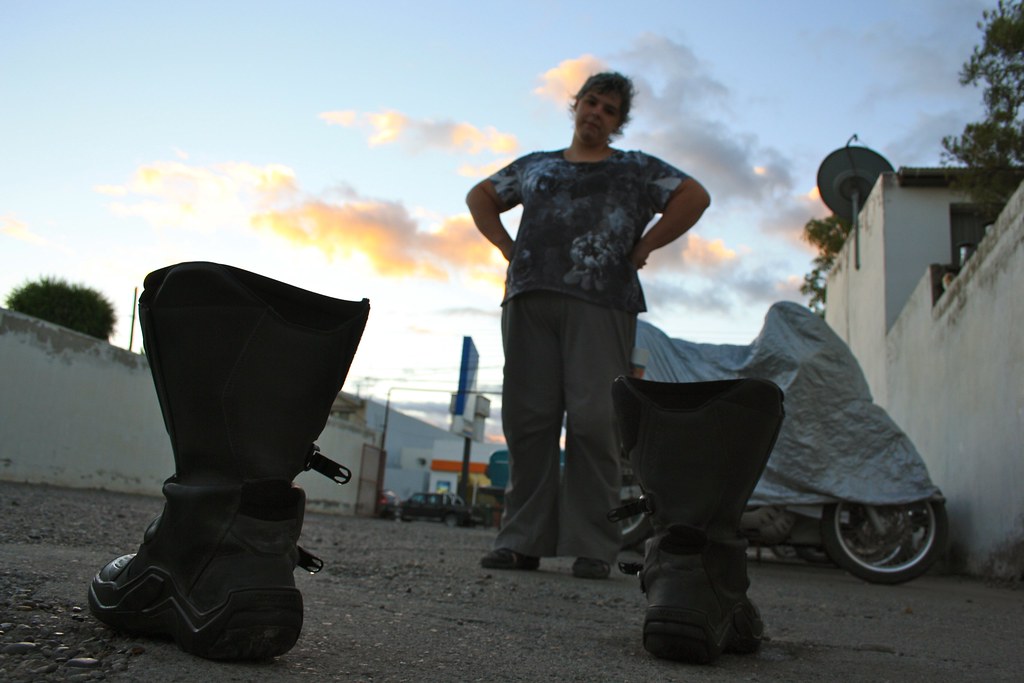 We pondered Gas Station Dinner at the YPF across the street, but both feared the the hamburgers had been there all day and would be gross… so wandered back to the restaurant we ate at last time where Dachary accidentally got excellent steak and I got totally boring ravioli.

Back at the room we got an e-mail from Naomi and Alberto saying that they’re in El Calafete and shall be awaiting our arrival tomorrow. We can’t wait. They’re staying at a campground and it’s hovering just below 40 F at night, which will be a bit chilly but we’ll totally do it to hang with Naomi and Albert.

For future Runaways:
When you find yourself needing to stay in Rio Gallegos head for Centro. When you see the flags outside the Hotel Rio… something fancy looking take your next left (illegally). Go a block and a half and there’s the Hotel Paris ( GPS is S 51 37.245 W 69 13.023 ). Parking is to the left of main entrance. Should that fail continue about a block and a half down and look for the hotel on the left which is a bit lower quality. Parking is to the right of the main entrance. Should that fail go two blocks down, hang a left, and just after the next intersection there will be a hotel on the left corner which is a bit lower quality. Continue to the far side of the building for the parking. Should that fail you’re on your own.