\We actually managed to get up, get some work done, have breakfast and still beat check-out time, which was a bit of a miracle since my panniers were torn apart… Kay had gone looking yesterday for a fuzzy for his Cardo microphone and that resulted in dismantling my panniers. They always take too long to put back together when we have to dig deep down for something.

Got out just after 10AM, and we were sweating as we bundled up. This is one of the most annoying things about wearing all of these layers. When you’re getting ready, you overheat in zero seconds flat… but we’ve both been riding in cold enough at this point to know that we’d need the layers, so the key is to get moving as quickly as possible. And sure enough, once we hit the road, I turned my electrics up.

Rain was in the forecast today, and I remembered to put my feet in plastic bags before I put them in the boots… but I didn’t realize until I’d already locked up my panniers that the plastic bags had holes in them. I have more bags in my panniers, but I didn’t want to deal with unlocking them and taking stuff apart so I could find them, so I decided to deal with the holes. They were small holes, and I hoped that maybe the rain would be minor enough that it wouldn’t matter too much.

Hit an ATM on the way out for some more cash to tide us over on the road, and then off… north. It was strange to be heading north. I realized as we rode up to the police checkpoint on the edge of Ushuaia that we couldn’t tell police we’re going to Ushuaia anymore… the thing that has been our goal for 100 days is a place we’ve *been* now. Now the goal is Buenos Aires, which isn’t anyplace either of us cares to go… but it’s how we’re getting home. And we’re both excited to be going home at this point, so we’re excited for that… but Buenos Aires itself, sadly, is just another city, and I think we’d both prefer to avoid it if we could.

But I was looking forward to the glacier, and hoping we could spot some penguins at the penguin beach, so it’s not all a slog back to a big city we don’t care about. There’s still some fun stuff along the way.

The breathtaking scenery down here was a most pleasant surprise at the end of our road… much of the area of Patagonia north of Ushuaia is just flat plains with the occasional hill… beautiful in their own wide-open way, but we were simply not expecting the alpine landscape and beautiful snow-capped mountains that awaited us at the end of the road. So we were happy we were able to see more of it as we left Ushuaia. 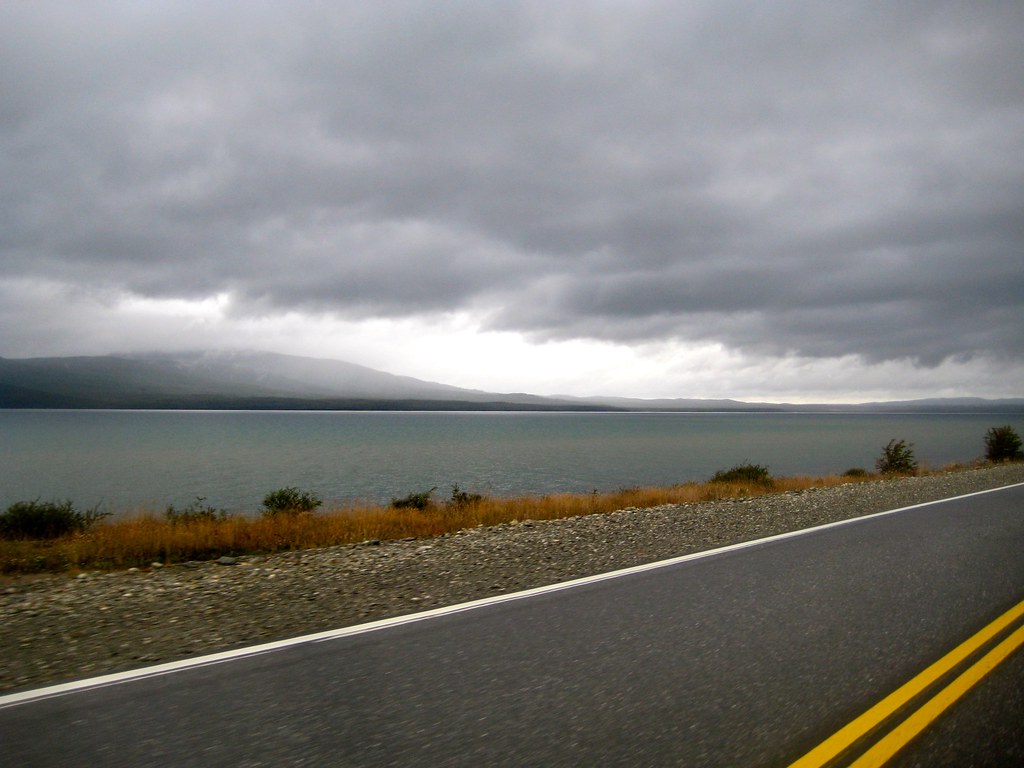 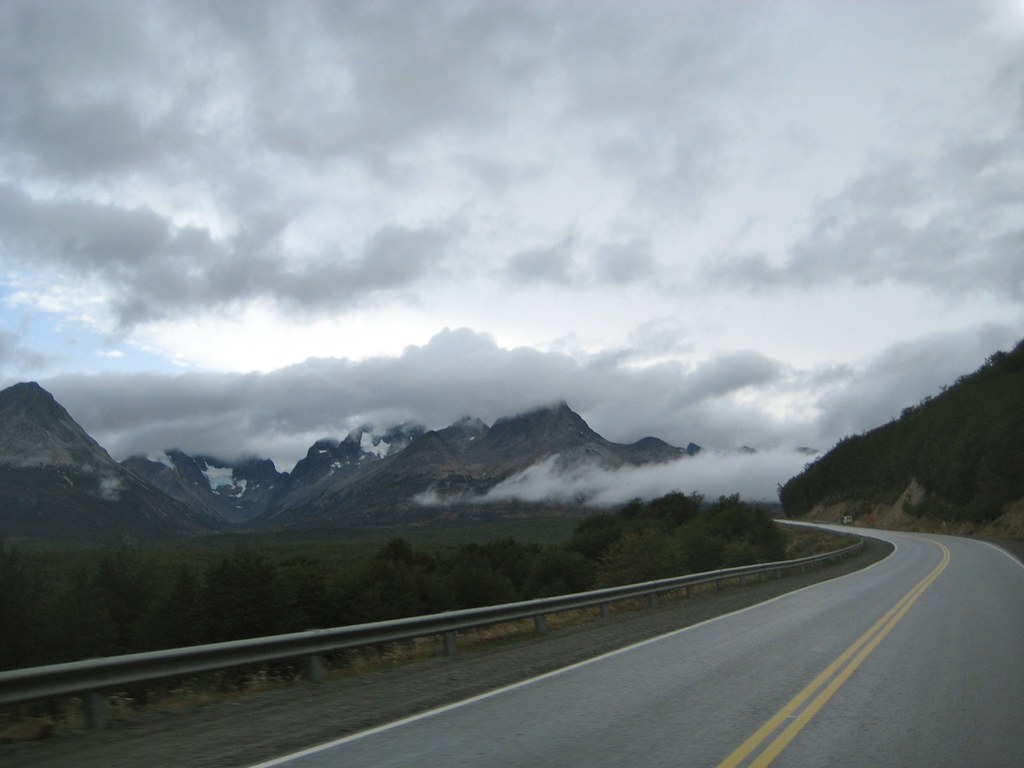 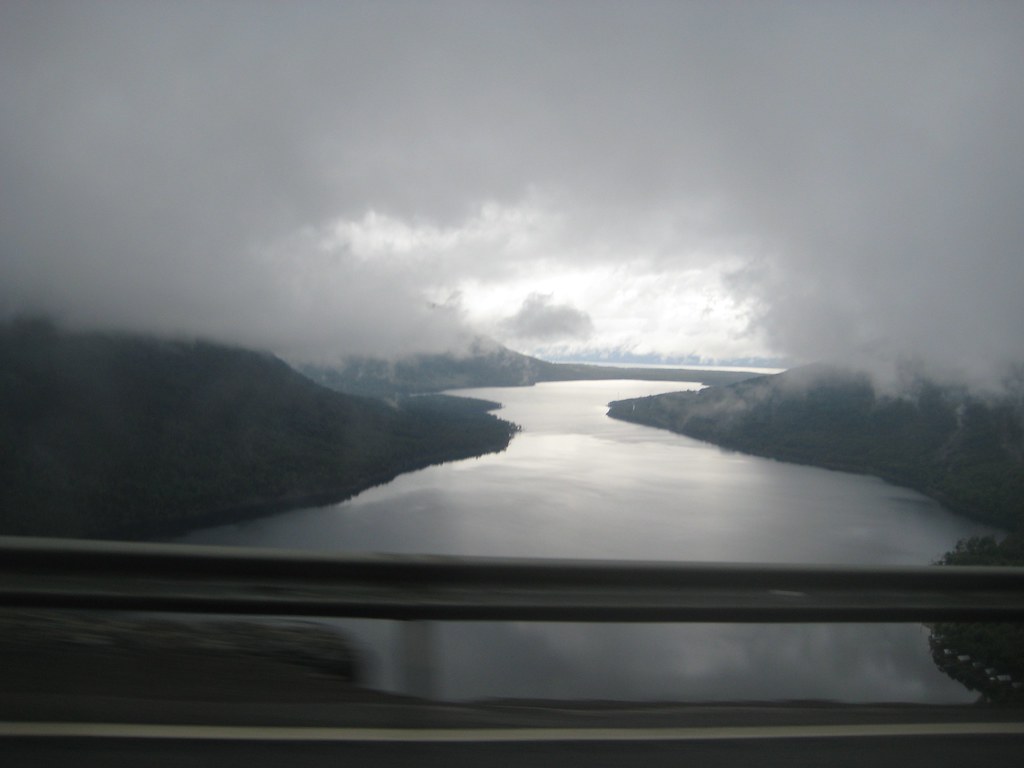 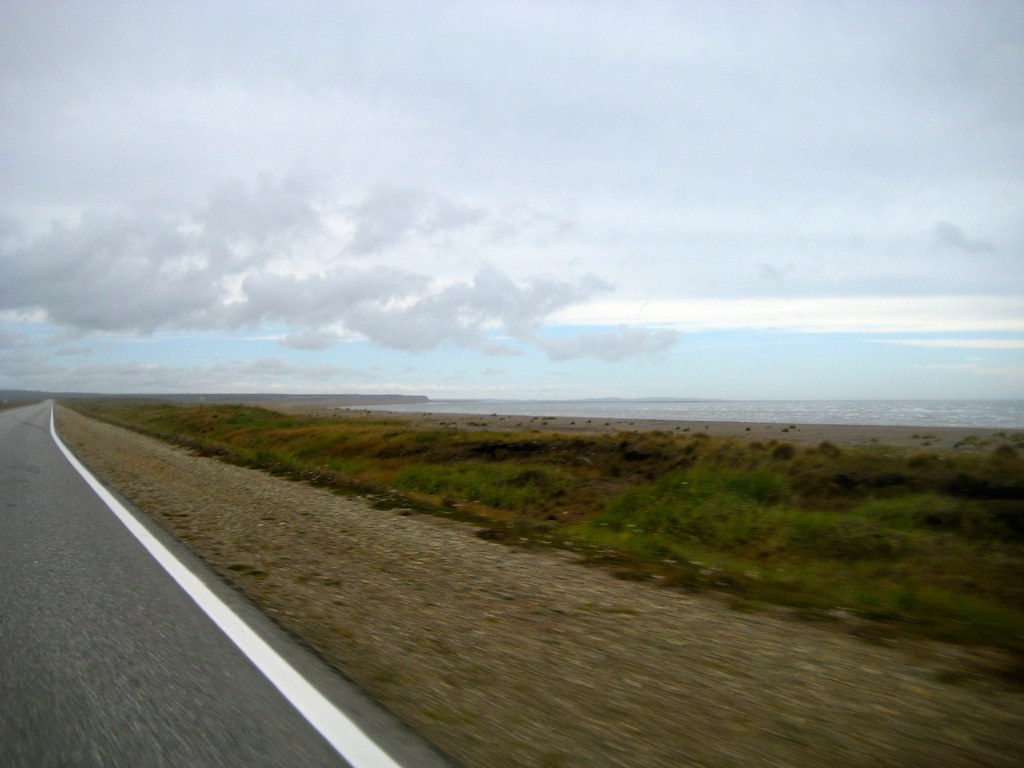 We enjoyed the scenery right up to the very mountain pass itself… and then we rode into a cloud so dense we could barely see 100 feet ahead of us. We’ve ridden into dense cloud cover many times now on this journey, but this time it was literally as sudden as riding around a corner and being confronted with a wall of cloud, completely unexpected. It was kind of surreal. And in just a kilometer or two, we rode out again, and could see more beautiful scenery under the cloud cover on the far side of the pass.

We did run into a little rain at one point, but it was barely enough to qualify as rain… just enough to make us damp, but not enough to make us totally wet. It only lasted for a minute or two, although there was pervasive drizzle for a decent amount of the route.

Alone, any of these things would have been fairly trivial. But together, it potentially adds up to too much time (especially since the road was still wet, so we don’t know what condition the dirt will be in) for us to get to Rio Gallegos before dark. Neither of us wants to ride in this region after dark because there are so many llama-deer (many dead on the side of the road, and packs of them hanging out near the road) and it’s too dangerous. And I think, for the moment, we’re still too far south to camp comfortably with our gear (the temperatures are too cold). So we agreed to ponder it when we arrived at Rio Grande, but I think we both realized we wouldn’t be able to do the leg from Rio Grande to Rio Gallegos today.

It was around 1pm when we rolled into Rio Grande, and the last 100km from Tolhuin had been a bit windy. My boots were soaked from the wet roads, and we were both a bit chilly. As always, the first order of business was to find gas. We’ve heard from two other sets of riders who have been here recently that Rio Grande has been out of gas, so we wanted to make sure there was enough gas for us to go on. There was, so then it was the question of how far we could make it today, or what to do next.

After discussing our options, neither of us wanted to take a chance with the next leg today. So it was into the gas station for lunch (since none of the restaurants are ever open at this hour) which was, unsurprisingly, more ham and cheese sandwiches and chips. And while neither of us had been particularly cold on the bikes, sitting in the gas station we both got very chilly. Was probably a good call for us to stay here.

We headed toward where we had seen a cheaper-looking hostel on a side road when we were through here a few days ago, instead of the expensive hotel where we’d ended up last time. We found it fairly easily (in spite of me getting turned around and insisting to Kay it was somewhere it’s not) and Kay went in to check. 200 pesos for both of us – HALF the price of the other place. The room is a bit of a downgrade from the types of places where we’ve been staying (i.e. the sink doesn’t even have a drain pipe, but instead just runs onto the floor and drains through the floor drain… and the entire bathroom is the shower… there’s no shower curtain, so if we shower, the toilet and *everything* else in the bathroom is going to get soaked). But it’s half the price.

The thing is, if we’d had this room in some of the places in Central America, or Colombia or Ecuador, I wouldn’t blink at it. It would even be fairly nice compared to some of the places we’ve stayed. But to be staying here paying $50 US for such a crap room, that’s comparable to some of the rooms we’ve paid $7 for in other parts of Latin America… it’s a hard pill to swallow. I really wish Argentina wasn’t so expensive (this part, in particular).

Chilled in the room for a bit, and then went out to walk around the town and see if there was anything to see. There wasn’t. Kay spotted a store that had camping-looking stuff in it, so we walked a bit further, turned around and headed back, checking out the store that had the camping stuff on the way. It was a teeny section in the back of an upscale department store (think Macy’s, but on a much smaller scale) and we didn’t really see anything we needed.

But just as we were heading out, I had a flash of brilliance… “I wonder if they have any waterproofing stuff for boots?” So I head back over to where I saw some spray bottle things to see what they had… and Eureka! They have spray waterproofing stuff! One of the ladies spoke a little English and recommended one of the products in particular to us, so we took it. Yay! If it works at all, I’ll be thrilled because my boots were portable puddles again today, with soaked socks – even in my plastic bags – even without “real” rain – just from wet roads. Bah! So waterproofing spray totally made my day. I just hope it works.

On the way back to the room, we stop by the wonderful bakery that had the delicious tasty treats last time we were in town (which just happens to be right across the street from our hostel… that’s how I spotted the hostel when we were here last time) and brought some back to the room to nom. And then, bah, Kay ate one that we were supposed to share and I was sad.

Kay’s note: because I’m an idiot…

Watched our last episode of Dr. Who that we have on the iPad (a two-part special that isn’t in any of the regular seasons) and then puttering around on the computer. Alas, our cheap hostel doesn’t have net – first time we haven’t had net in probably a week – so maybe we’ll get out of here at a decent time tomorrow morning.

Now I am busy anxiously waiting for my boots to dry enough for me to spray them with the waterproofing stuff. You’re supposed to let them sit for 24 hours after spraying, which obviously I can’t do… and I somehow think I shouldn’t spray them while they’re wet. We’ll see if my impatience gets the best of me and I spray them anyway. Even if the first coat doesn’t work 100%, the bottle is big enough that I can re-apply.

Keep your fingers crossed for the waterproofing stuff! It would TOTALLY make my day, week and probably the remainder of the trip to have boots that are waterproof again, especially with all the rain we keep encountering.