“Breadfast” was even worse than expected. We go to the restaurant but it’s closed, and we’re instructed to go acquire breadfast in the gas station seating area. So we go, and sit, and wonder how exactly this is supposed to work. How are they to tell the difference between people coming in to sit from the gas station and people wanting breakfast without… whatever else they’d buy?

We sit. Nothing happens. We watch others do the same. Nothing happens to them either. Eventually one ends up talking to an employee. He gets up, acquires his bread products from the glass cabinet that holds them, then goes back to his seat. Hmm… I must have missed something, because how does he get his coffee or tea?

I go to the cabinet. Noting that it contains the same bread products that it contained last night, and probably all day yesterday. I grab a selection for us, and stand in line at the cashier hoping that somehow he’s involved in the process because we’d be damn thirsty without some drinks.

I show him my receipt from the hotel, as instructed by the woman last night, and drinks are ordered.

The bread products are, indeed, from yesterday, and we only eat some because they all suck now. We’re not being picky… these are the light flaky things like croissants that simply don’t survive very long.

The weather, however, is beautiful. There were a few clouds when we got up, but they’ve burned off or moved on, and now it’s almost exclusively blue sky. The thermometer claims it’s 50 degrees although it feels more chilli than that. I’m hopeful that I’m just perceiving it colder than it really is. Dachary is convinced the thermometer is broken… she may be right. So we load up the bikes, or… start to.

Dachary loads her panniers and I decide that mine require further beating. So I wander off, find a brick, and begin to liberally apply it to the pannier. Last night we’d determined that the screws were still just fine, it was the pannier itself that required straightening where the screws emerged.

I beat it until my hands hurt, which wasn’t much, because bricks don’t seem to be designed with many shock absorption devices for ones hands. But, it helped somewhat. Now both top pucks make contact, although one only barely. I consider it the reserve puck… to be used in case the other one fails. 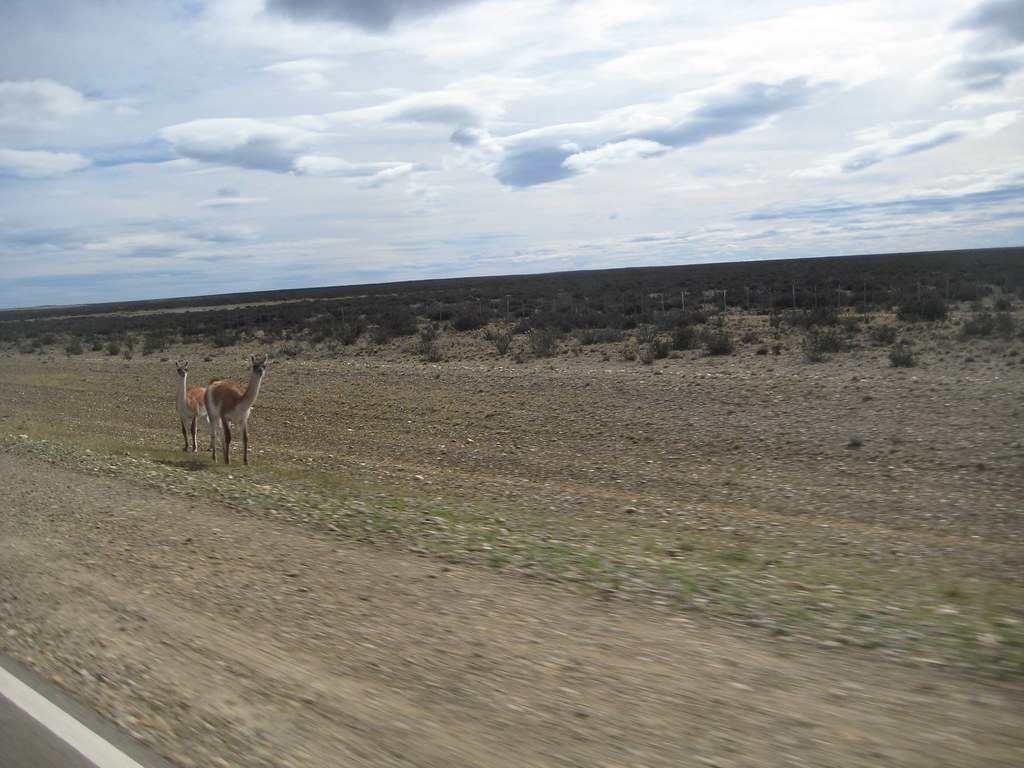 The we ride for a bit, passing more llamadeer, and i start futzing with my mirror when I hear Dachary ask if I saw… something. I didn’t quite hear. “Ostrich” she says. “Ostrich?!” I think. “On the side of the road.” she says. Ok… I know I was focusing on the mirror but how the hell would I miss an eight foot tall giant blob of black and white against a tan tan landscape? Damn. I’ve got to pay WAY more attention… A little while later I see some grayish birds maybe two and a half feet tall milling about on the side of the road… “Ostrich!” I hear… “Those are emu” I reply. And they’re surprisingly well camouflaged. The gray isn’t a solid flat color like on a seagull. It’s got variation, and their legs and neck are a nice gray too.

Apparently Dachary has never seen an ostrich in real life, and she’s definitely never seen an emu. I can’t remember ever seeing an emu in real life either, but i’d seen them on tv. I inform her that an ostrich’s back would come to somewhere near her shoulders, while its head would loom over her, and that they’re black and white. I think maybe she assumed that these were just females. Looking at the pictures as I write this I realize that female ostriches do look a lot like really large emus, only with white tips on the wings. Also, I’ve no clue why there are wild emu running around in Patagonia.

More llamadeer, a few more emu, and not a lot else. Routa 3 is really flat and this part of it is one of the most boring roads on the trip. But, every time we stop for gas, or a pee I excitedly tell Dachary “Guess what?” “What?” she says. “I’m not frozen!” “Hooray” she says. I’ve decided that today is a wonderful day because I’m not fucking frozen like yesterday. It doesn’t matter that the landscape is lame. I’m not frozen or soaking wet! The temperature isn’t actually much warmer (if any) but the lack of rain makes a huuuuuge difference.

There was, however one notable problem, well… three, on the way to our lunchtime gas stop. The throttle got stuck open… three times. At least, that’s what I thought was happening. The first time the revs started shooting up and there was still some forward pull from the engine. Shit! I grab at the clutch. I try switching gears, because I don’t know what else to do, and … that seems to do it. It calms down. Of course, I was right behind a big truck when it happened.

Next time it happened I’m behind another car, just about to pass it. And again … I’m noticing a trend here…

My barkbuster had gotten shoved way up when I dropped it in the mud the other day (probably saved my clutch lever) and I haven’t bothered to fix it yet because we’re not going to be on dirt or anywhere else I’m likely to drop it again.. I’ll get to it… but now I notice that the top edge of the plastic is pressing hard against the place where the clutch cable starts coming in to the lever. Hmmm.

At lunch we find that the gas station serves real, honest to goodness food! Holy shit. How wonderful. I point to the food on other peoples plates “Look! Real food!” After we order I keep interrupting the conversation with “We’re going to have a real lunch!”

Today is a good day. Even the crazy engine shit can’t get me down.

After lunch I take the leatherman to the Barkbuster, loosen it up, then have to karate-kick it down into place because we can’t push it. After it’s back in place we notice that the plastic slamming upwards managed to break the tension adjustment screw / tube thing in half. So, no more tension adjustment for my clutch.

My theory is that the first time the clutch was only mostly in when it got stuck and thus there was still some engine power. The other times I was about to pass, and while, at the time, I associated it more with the hard twisting of the throttle rather than the clutching, which is totally on autopilot at this point. No more problems after the tweak though, and the tension seems to be fine.

Eventually we make it to Rio Gallegos, where we’ve decided to stop for the night because the border is close and we don’t think we can make it anywhere else with a hotel. We pull into the gas station, hop off for a desperately needed pee and the ATM that happens to be there. We notice that the gas station attendants are shooing the customers away when they come. Not good. We’re gonna need that “gas” stuff. But then, a tanker truck pulls up, and parks over by the holes in the ground they pour the gas into! Oh happy day!

I confirm that no, they don’t have gas, then ask how long? “Medi hora”… I can wait medi hora, even if that is probably a bullshit estimate. We go in, take off our gear, and some gas station snacks (empanadas and cookies). Occasionally people notice the truck and try to form a line to wait for it, but the guy shoos them off. I take a picture of the tanker truck guy because I’m so happy he’s shown up, and how often do you get to see one offloading its contents? But after that he gives Dachary and me the evil eye every time we try and see if there’s any progress. 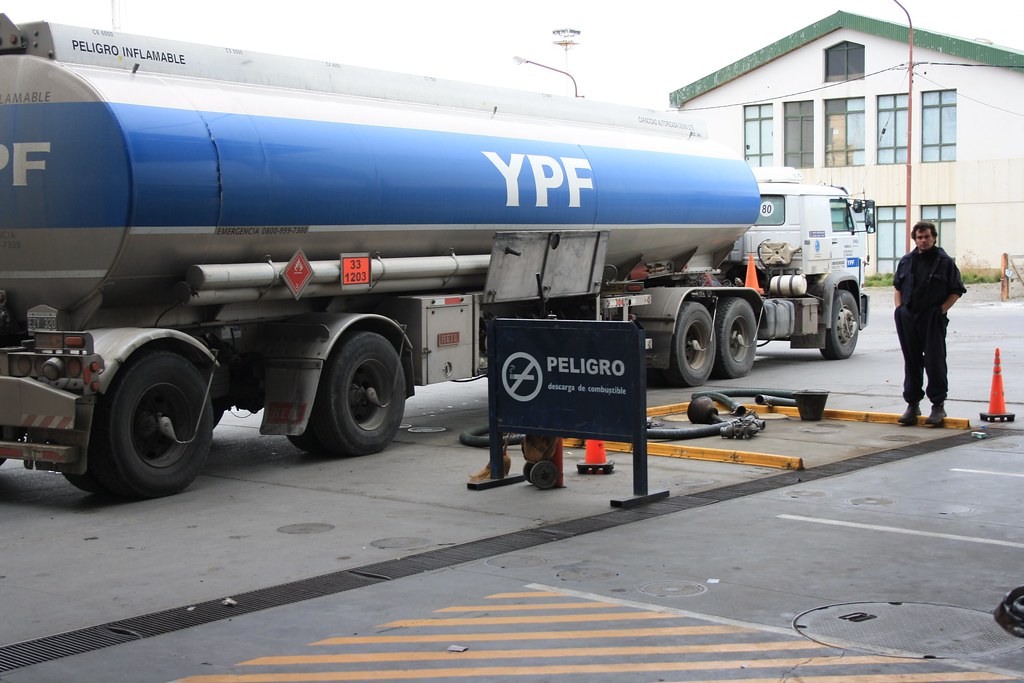 The whole time he’s offloading Dachary is chomping at the bit to get out there, but we don’t want to gear up, get in a line, and then get shooed. So, we wait, until the tanker man starts putting away his stuff (an hour after we got there) and a line starts to form, but doesn’t get run off. We throw on our stuff hop on the bikes and get in line about eight cars back.

It takes another half an hour, but eventually, we’re gassed up, and set off in search of a hotel, but drive past the whole city without seeing a one. Ok… Usually hotels exist where travelers can see them, because the locals tend to have places to sleep already.

We go in towards the center of town and see a building with HOTEL and contact information on the side. Pull up. It looks like a hotel. But there’s no-one at the desk, the desk is a bit dark, and the door is locked…but there are cars, and …. hmm. I wander around the corner to where Dachary saw another hotel sign. It points directly at a tiny house. That can’t be it. There’s a very large pink house looking thing beside it, which *could* be a hotel. I walk up to the door. This doesn’t look right. I ring the buzzer. An old lady opens the window beside me and informs me that no. It’s not a hotel. Not anymore. I apologize and ask if she knows where one is. “Centro” Which confirms, to me, that the one around the corner, is in fact, not a hotel… at least not anymore. While I was away Dachary deduced that it was now an apartment building.

Centro it is… We pass a fancy fancy looking place that we’re pretty sure we don’t want to pay for, but see nothing else. I go in, in hopes that either we’re horribly wrong or that they can lead us to somewhere more appropriate. I’m not wrong, but he does lead us to somewhere more appropriate. The Hotel Paris, which is only 225 pesos ($60 US) has good off-street parking, and WiFi. I say “Only” in the context of Patagonia where every hotel is “only” fucking expensive. But, the lady at the desk is nice and it’s not a town that looks to have many that haven’t gone out of business.

The room, however, is roughly 1,000 degrees inside. That’s ok, there’s a window and it’s already cool out. We track down dinner and luck out in that it’s 8 PM and thus we can find a restaurant that’s actually open.

I’m just pooped, and Dachary’s mentally pooped, so we decide to call it a night and get some sleep… with the window open.