We hadn’t slept in in a while and both really wished we could have yesterday so I fully encouraged the extra sleeping.

Eventually we got out of bed and loaded the bikes. I wandered around to the restaurant and asked the guy if they had breakfast, he seemed a bit confused and suggested the “machina” which I’m pretty sure was an instant coffee machine, and not, an instant breakfast machine. Thanks, but… no.

Dachary’s note: Last night was wonderful, I slept extremely well and really enjoyed being lazy this morning. Normally I’m eager to get up and on the road, but today I felt like being lazy and really appreciated Kay indulging me. I was in the best mood I’ve been in for a *long* time and it was absolutely worth losing the hour or or whatever of being on the road for being so happy.

We rode out, and the scenery quickly changed. North of Santa Isabel there were fences about 100ft from each side of the road, but between the road and the fence were lots of big bushes and small trees that you could use for cover if you wanted to camp. You wouldn’t be completely obscured, but good enough… Almost immediately south of Santa Isabel there was only scrub brush about one foot tall. If you were to camp here it’d be in plain view on the side of the road. Before, and after, we saw very few dirt roads to the side that weren’t behind locked fences, and most of the ones that were accessible had fences right along their sides as far as we could see. 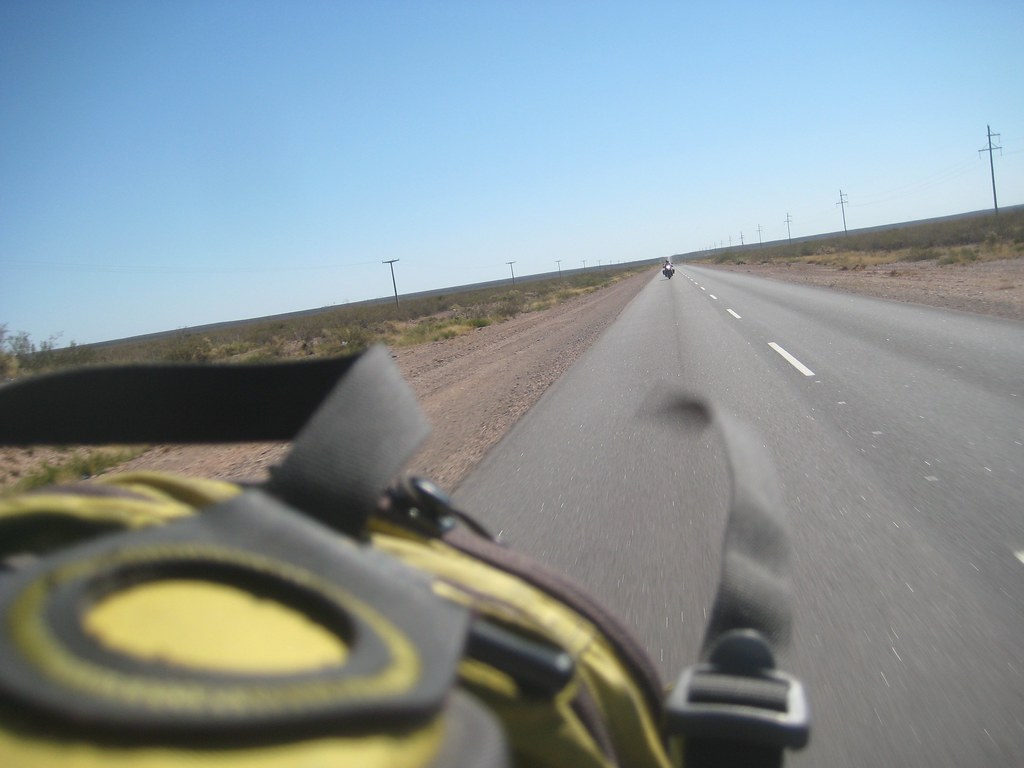 For a while, not much changed, and eventually we stopped for lunch at a hotel / restaurant next to a gas station in the middle of nowhere. It looked like it might be pricey, plus the whole captive audience thing but we were hungry. As we entered the door we saw a “WiFi” logo. Sweet. We go in. We sit down. We’re watched by four workers, and watched, and watched, and basically ignored for at least five minutes. 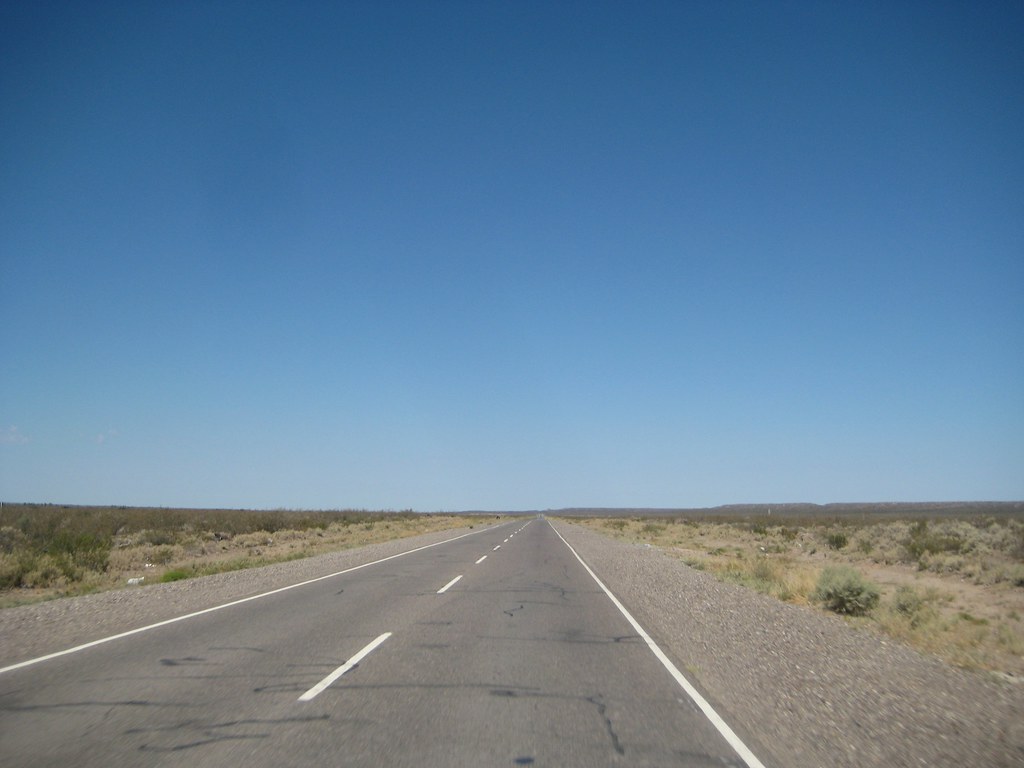 I walk up…. “um… is it only the buffet? or do you have a menu….” I know they have a menu, because it’s on display in front of the door… One of them comes out and shows me the buffet “These are hot. These are cold. You can eat as much as you want….” Really… Wow… thanks… Is that how buffets work? Then, she reluctantly hands me the menu, but just one.

I’ve opened thousands of cans of wet cat food in my days and I swear to you this shit tasted exactly like the cat food smells.

Dachary went with some of the potatoe-salad looking thing and her reaction was so strong, and immediate, that I swear I thought she was going to barf it out on the plate. They even fucked up the corn on the cob. I didn’t even know this was possible without burning it, but apparently it is.

We pulled out, saw a cone in the road, and a detour off the side of the road beneath a banner proclaiming the evil nature of fruit and a welcome to Patagonia… Patagonia?!?! WTF?! I thought… but… it can’t be Patagonia already! Promising we had no fruit, we were fumigated and on our way.

Ten minutes later we passed some tiny pizza and sandwich place and so wished we had lunch to do over. 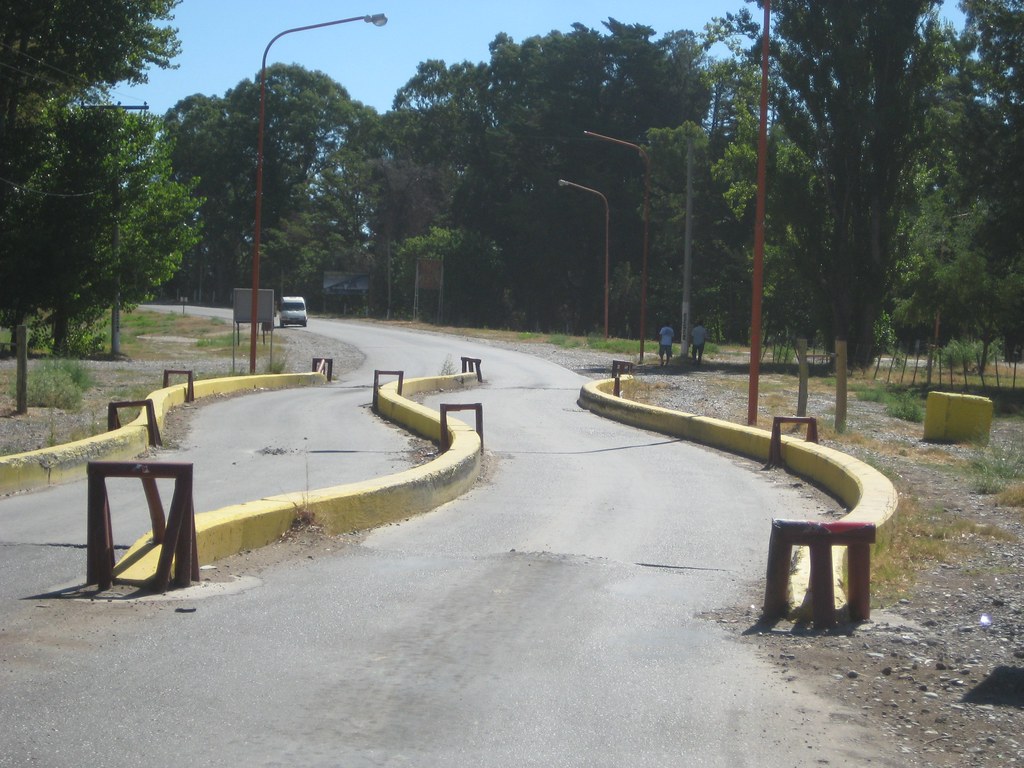 Towards the end of the day we found a gas station with about ten Adventure Motos: Transalps, Africa Twins, BMW GSs, etc. We filled up and no-one approached us. We turned around and pulled up alongside them. “Hey! Where you coming from?” He named some town just up the road. “Ahh, and where you going?” Just making a loop. They asked where we we were from and I told them. It didn’t seem to have any impact. “how many days?” I asked them “Today and tomorrow.” “ahh… right then… Adios!” It wasn’t that I thought they were posers or anything. But, no-one seemed to show any interest in us, or our trip, and they didn’t seem particularly interested in expanding upon themselves. So fuck it…

One thing they did mention was the name of a town down the road that was good. Everyone wants to know where we’re going NOW, like… tonight. They just don’t get that we don’t have a clue. “South!” I say. “No no. Tonight.” “I don’t know…” They think we’re just really bad at Spanish, which we are, but the truth is that I don’t have a fucking clue where we’ll be tonight. I say we’ll drive until it’s night and then look for a place to sleep. “Yes but where?!” they want to know.

I think that may be the big difference between people stuck in the corporate world and people who have set themselves free on their adventures. When you’re dealing with schedules and shit like that you plan. You worry about tonight… But, for us, tonight is largely dependent upon how the day progresses. Usually we look at the map in the morning and say “hmm… I dunno… maybe we’ll make it this far today…” But we don’t pay any attention to the name of whatever town that was, because we don’t care and we don’t even know if it has a place to stay or eat in it. We just go… Some days the road is fast. Some days it isn’t…. In South America there’s an increasing chance, every day, that we’ll simply end up in the middle of nowhere when night comes. And that’s ok… 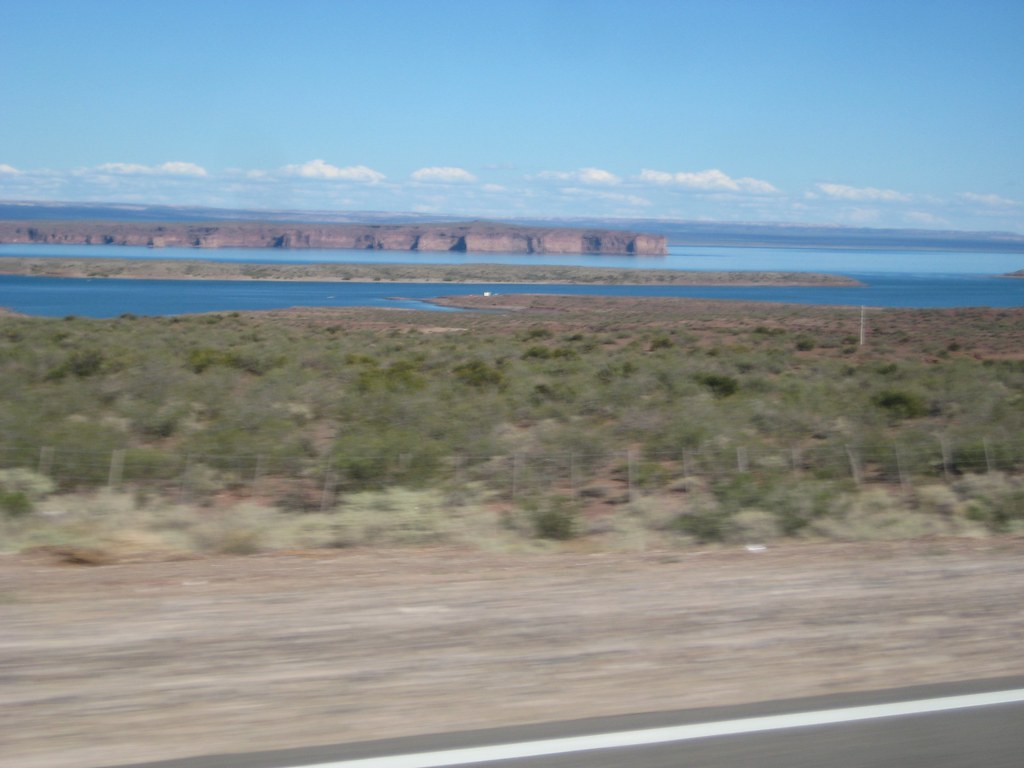 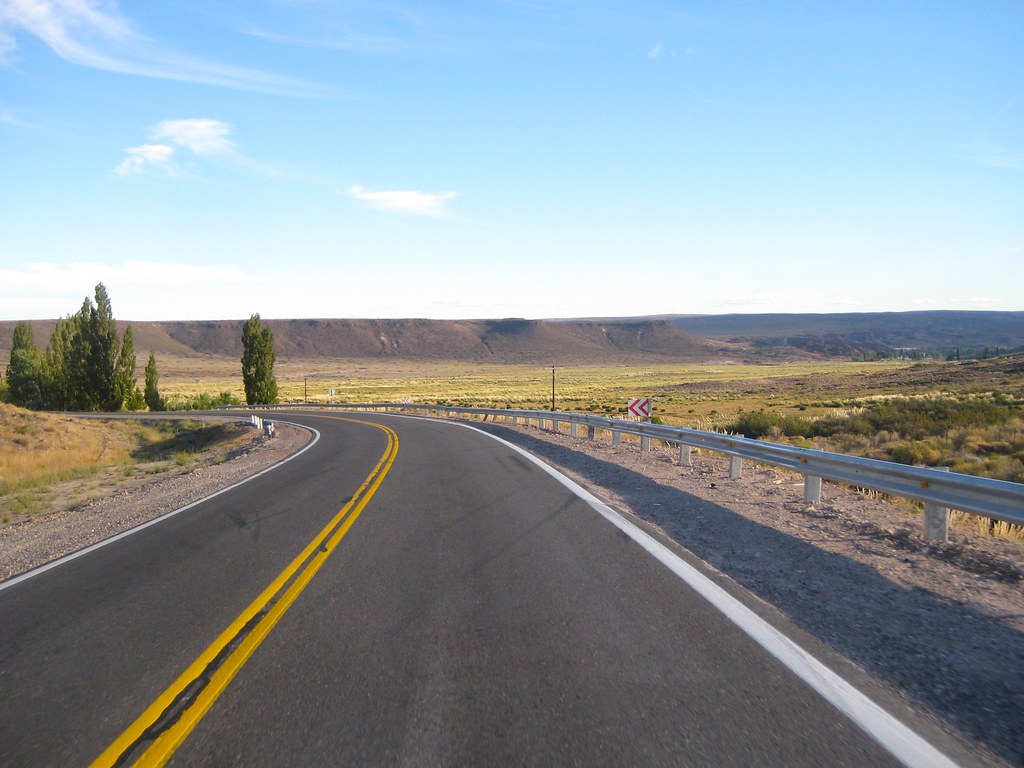 Just before the uninterested bikers a huge lake opened up to our left, and we followed its coast until we eventually made it to the town we think they recommended: ” Piedro Del Aguila”. As far as we can tell it’s the Fly Fishing capital of Argentina. People dragging boats everywhere. Lots of cars with dirt bikes with race numbers on them (not sure what the deal is with that). A nice park. A campground (didn’t see that until after we grabbed the Hospedaje with WiFi on the sign… wouldn’t have seen it from the bikes anyway). And a pile of restaurants all of which were closed. We eventually found one that was only technically open, and when we walked in the lights were off and upon asking if they were open, “no, not to go. for here.” the waitress had to walk off and ask someone else if they were open. Weird I tell you.

Back at the hospedaje we’ve got shite for upload speeds ( It has taken over half an hour to upload one picture at 1KB/s now) but we’re happy to be able to post to you. We’re uploading the backlog of posts since Santiago without pics.

Oh, before I forget. Today my odometer stopped working. Or, we think it did. It now only shows the trip meter. We’re not sure if the odometer is still counting behind the scenes or not. I hope so because what little resale value I had is quickly plummeting. Not that I want to get rid of the bike but still….

Oh oh… We passed through Neuquin today, and when we got to the Hospedaje we ended up chatting with some guys who had taken their bikes and their kids to the moto race today and they informed us that two months ago a BMW moto place had opened up there. It’s not even on the BMW site, so I’m not sure it’s an official dealer or what. But, the point is that there’s a place in Argentina to get your BMW looked at. Me? I’m crossing my fingers that Horse can hold out for another 5,000 kilometers. Which reminds me… I’m leaking oil now.

Starting minutes after leaving BMW Santiago I have: tail light that doesn’t indicate braking, gas light that won’t go off, neutral light that is on 90% of the time, and now leaking oil from the sump plug.

Bonus about the neutral light, though? I can totally drive off with the kickstand down now. The bike still thinks I’m in neutral and doesn’t stall.

And because there weren’t enough notes at the end of this post. Dachary has just reminded me of something that’s been going through my head the past couple days. At the start of this adventure I thought I could be one of those people that wanders around the globe for years on end (oh to be able to afford that). But, as the journey has progressed I’ve come to the conclusion that 90 days is just about right for me. I’m missing my comfy couch, my dog, and just… chilling. I think maybe It would be better if we had time to just hang out in a nice city for a couple weeks… maybe that’s the trick to making motorcycle trips last years; more time to stop and stand still. But even then… I like having *my* home. It’s a safe, and relaxing place I’ve carved out for myself in a neighborhood I love where I can find what I want or need without worry. Home is a good thing, and being away from it for a while really makes me appreciate it all the more.