We’d set the alarm for 7, and hit snooze twice, because we wanted to be up by eight, when we thought he was going to come by with the change, but we were both exhausted and would have really preferred more sleep, especially if we had of know no-one was going to come at eight.

Last night’s confusion over where or when we’d get the change for the room was quickly resolved through a lucky meeting with the guy and asking… “where? am I supposed to get the change?” to which he told me his boss would bring it. “Oh, when?” “11 o’clock.” “Ah. But I need to go…” “Hmm… let me ask this guy here if he can make change.”

So, we left, went back into the town we explored the previous night where we’d seen ATMs and a place that sold insurance. We doubted the insurance place would be open, since it was Sunday and a holiday weekend (we still don’t know what holiday) but it was worth checking. The first ATM had no money. The second ATM wouldn’t give me any money, and the third ATM brought up a screen asking me to make a choice as to what action I wanted to perform and directed me to press one of the nonexistent buttons. There was a keypad below, and zero buttons around the screen. But, this wasn’t some fancy new-fangled touch-screen kiosk. No, it was your typical ASCII arrows pointing to buttons that were supposed to be on the side of the monitor, but there were none. There wasn’t even a way to cancel and get your card back without using the keypad.

The fourth ATM, around the corner, was one that i’d seen a pile of people using the night before, and worked fine… once I realized that in Argentina you can’t withdraw more than 1,000 pesos (about $250) at a time, which sucks when you consider how long we’ll be here and how much everything costs here. Alas….

We drove on, finding, without surprise, no offers of breakfast. Our day continued through wine country where my neutral light magically came on. As I was currently maintaining my speed in fourth or fifth gear I was pretty sure I wasn’t actually in neutral, and that another electrical gremlin had appeared. As the day continued it turned off, turned back on, flickered, and generally misbehaved.

When I went into BMW Santiago I had zero electrical problems. They removed my entire tail light assembly when I pointed out that they’d broken the red plastic that covers it (most likely the people who washed it). And when they gave it back it wouldn’t go bright anymore. Not half a mile after I left my gas light came on (incorrectly), and now, my neutral light came on. I’m not saying they fucked it up, but it seems a mighty big coincidence to me that something would get fucked with my electrical system after they fucked with part of my electrical system.

Anyway… as lunch time came, and we were both starving, we found ourselves behind a bicycle race, and then in the midst of it as the leaders and the laggers had spread out a fair amount. Past closed restaurants, and uninteresting restaurants, to one we wanted to get to but couldn’t because the police wouldn’t let anyone turn around and go the direction we’d just come from (because of the race). Then into town where we were detoured away from the main street with all the shops (and food) and onto residential streets. Until eventually we were able to cross the main street (but not enter it) where we saw a restaurant on the corner and said THERE! , pulled over and ate. 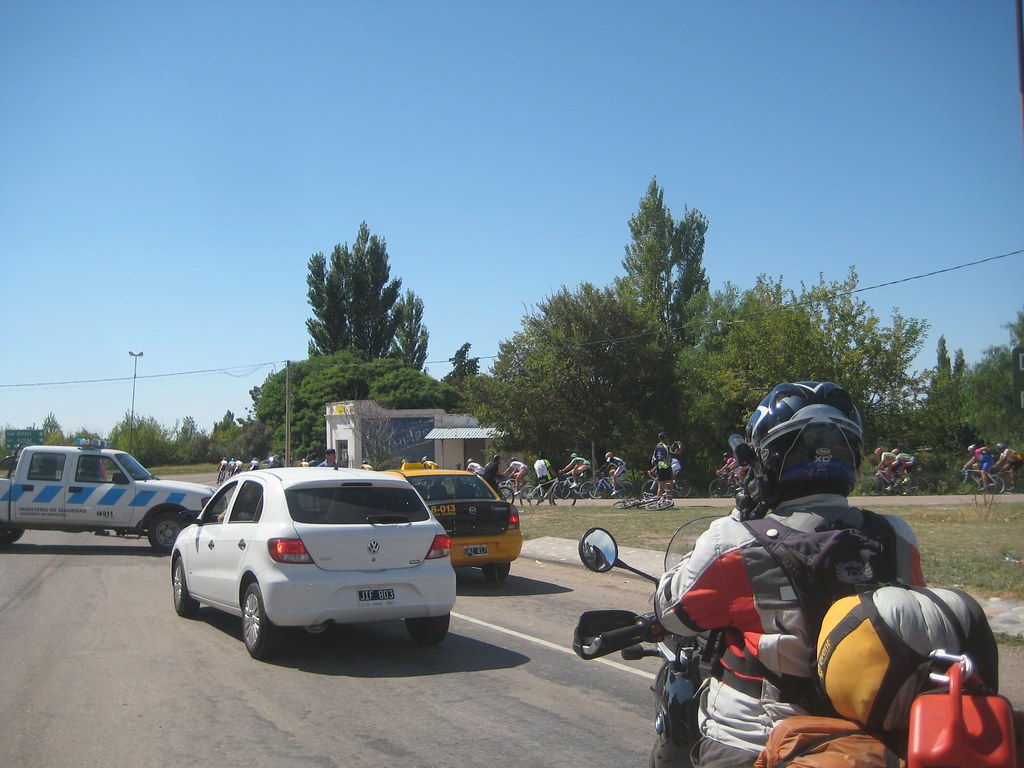 It was surprisingly tasty. I had ravioli and Dachary had some sort of battered and fried thin-steak which was oddly reminiscent of fried fish, but still quite tasty. To top it off, they had wifi which we used to pay some bills so that the dog-sitters didn’t find themselves in a frozen apartment. We still don’t know why it didn’t get paid automatically. 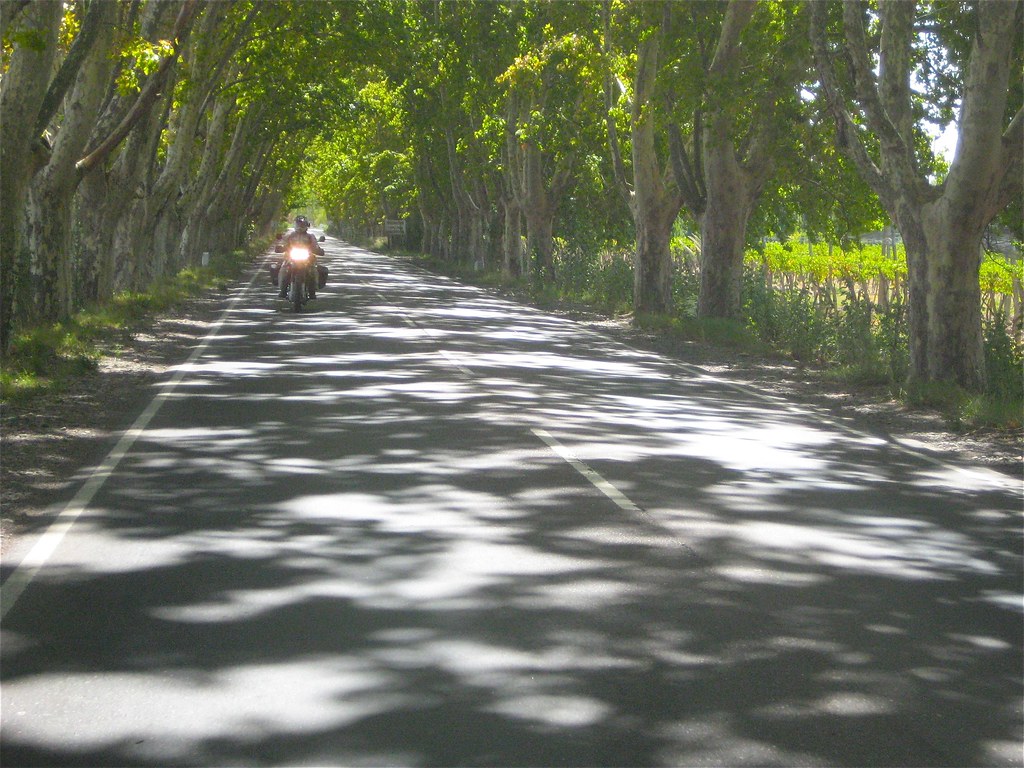 Wine country petered out into a vast open plain, with fences. Seriously WTF are they keeping in, or out?! It’s possible to camp on the side of the road, obscured by scrub brush and some short tree/bush things, and we were pondering the best strategy for hidey-camping in it when we came into a town (Santa Isabel) around 5:30pm to get gas, and chomp a couple ice cream bars while we contemplated what to do next. Food then camp? Maybe the next town for food? hmm… 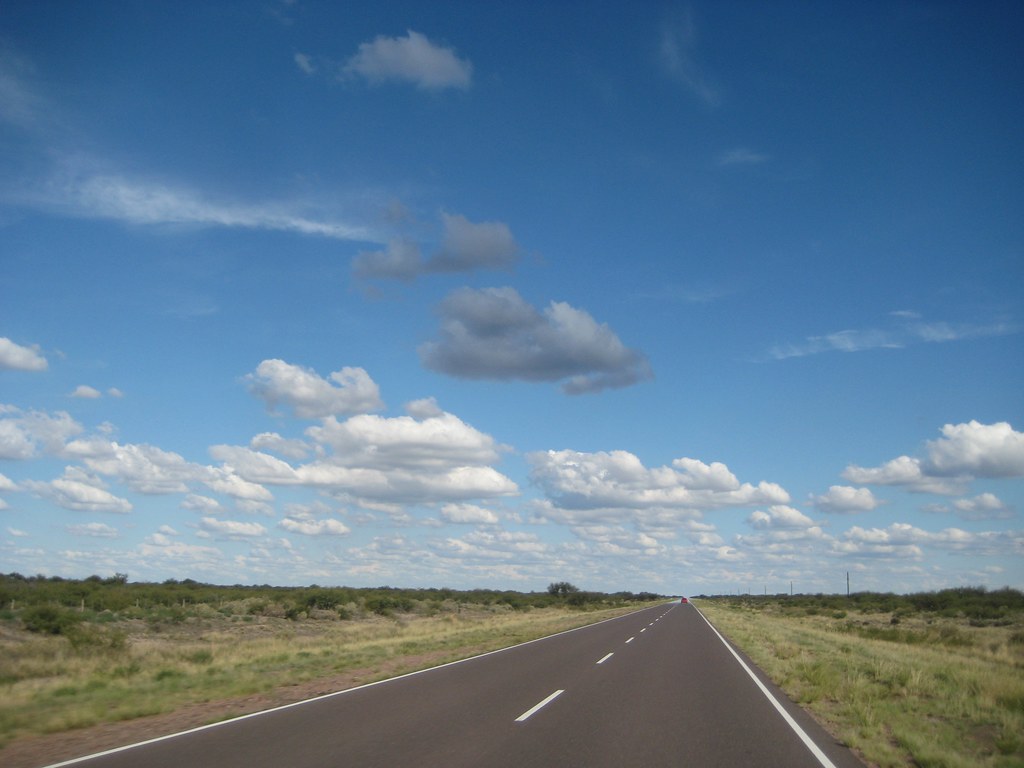 I highly recommend the “Cook” ice cream bars by the way. Very tasty. As we sat there chomping and contemplating, a guy came in with his kid and asked if he could take a picture of his child on the moto. “Sure” we said, “but be careful because it’s heavy.” He thanked us and we followed him out a minute or so later and got to watch him posing for a pic with his kid. It was cute, and we didn’t mind at all since he asked. 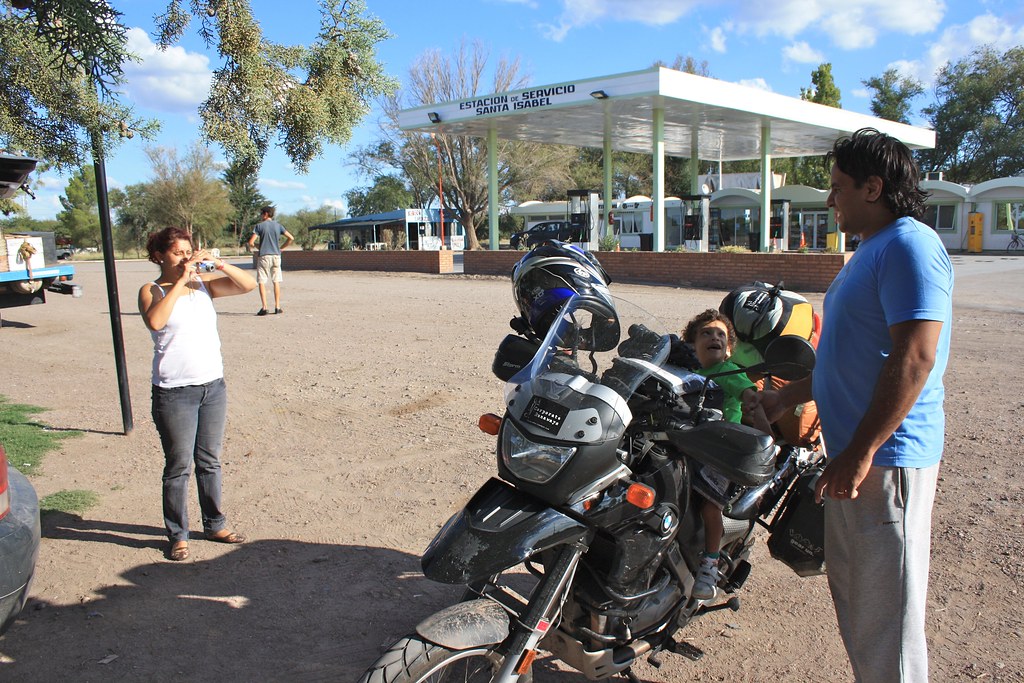 We’d decided to get food, then try and camp. It’d be tight with the remaining sunlight, but we should be able to pull it off. Some of the food places looked closed, but then we saw one that doubled as a Bus Terminal, so we said, “they’ll be open!” and they were… technically. We walked in, and sat down. One of the two employees saw us. We sat… five minutes went by. I went back to the guy at the front desk (just outside the dining room) and asked “Is the restaurant open?” “Yes.” he said, and I saw the woman behind the counter who worked it. I went back in and told Dachary that yes, it was open and not just being used as a seating area for bus people. The woman popped her head in the room behind the bar thing, then left. We waited some more, and some more. We contemplated the fact that I’d asked if it was open, but not specifically asked if it was open *for food*. We didn’t’ want to be obnoxious. We waited more. They definitely knew we were there…. Fuck this. If they’re not going to get off their ass to even give us a menu, or ask us to wait a few minutes then Fuck them. The service will probably continue to be crap.

We put our coats back on, grabbed our helmets and tank bags, and left. On the way out the guy was all “But… BUtt….Don’t you want food?!” or something like that. I don’t really know what he was saying and I don’t care. I kept walking.

We got on the bikes, crossed the street, went into a little cafe that we could see some people in, and had two delicious, and enormous, sandwiches. While they were being prepped an old guy gave us some helpful navigation info for circumventing the next large town while we all poured over the map.

We’d planned on camping, but the sun was starting to set, and I didn’t want to be rushing to get away from town and then hunting for a place in the dark. The cafe also had a Hospedaje so I asked the proprietor, how much (100 pesos, about $25 US) and went to see. He had been pretty obsessive about swatting flies in the restaurant (so many have just left them to multiply by the hundreds) and we had a feeling the place would be clean. It was. In fact, it’s one of the nicest rooms we’ve had on the trip. Smelled a bit like cleaner, but we can deal with that. Then he lit the burner for the hot water heater and the place smelled like gas for…well, it smells like gas still, but my nose is starting to ignore it.

We decided that since we had some light left we should tackle the wiring of my tail light, so we got out the wiring diagram, removed all the electrical tape, and starting reattaching the wires in different combinations. None of them made the light get brighter when the brake went on, and one of them made a spark, but didn’t blow a fuse. We didn’t replicate that combination. In the end we gave up and put it all back the way it was in the first place.

I have resigned myself to riding with the neutral light and gas lights on and am just crossing my fingers that the thermostat light doesn’t come on because I could royally fuck up my bike if it starts lighting up in error, and then it actually does overheat and I don’t have any way to know. Ditto for the oil, but that’s easier to check.

I love my BMW but I’m having issues with the “Unstoppable” marketing they have in all the BMW stores. It seems just as stoppable as any other bike by a decent manufacturer.