There was net, so, as per usual, we left later than we intended. Everything takes longer when there’s a net connection we’re free to use.

Breakfast, included in the room, was probably the lamest yet in Chile. We go to the “Comedor” which was just a normal room with tables set up in it, each one with a saran wrapped plate of sliced ham and cheese, and a couple common tables with hot water (for instant coffee or tea), a pan of cold scrambled eggs, and a thing of yogurt by each place setting.

One table was already occupied by about 7,000 ants, who were very grateful for the ham and cheese. We went with the table farthest from them as we don’t like eating with “their kind”.

The oil is still leaking, but the flow seems to be pretty slow overnight, so we head back into the Chilean desert, only this time it was somewhat chilly. All vents done up and contemplating, but not actually going for, the rain liners. Lunch rolls around and we’re all “MUST EAAAAT!” We pull into the first restaurant we see. It’s totally closed but without any signs indicating that. Bitches. We ride on and see a big “RESTAURANTE” sign. Yes, but wait, there are like four… big one that knows how to market and promotes its great view and fish, or the small one in front of us.

We go for the one in front of us. The Restaurant Brisa Marina. We order a cheese empanada each, as well as a normal lunch plate. We discover that the empanadas are deep fried. Then we discover that they’ve got a light flaky crust. Then we discover they’re fucking delicious and regret ordering normal meals too, because we could have just eaten heavenly deep fried empanadas. (They’re especially good with the included salsa, which is just the right combination of fresh with an undertone of spicy.) Sitting in the warm sun by the ocean, eating these delicious things, is wonderful for morale. 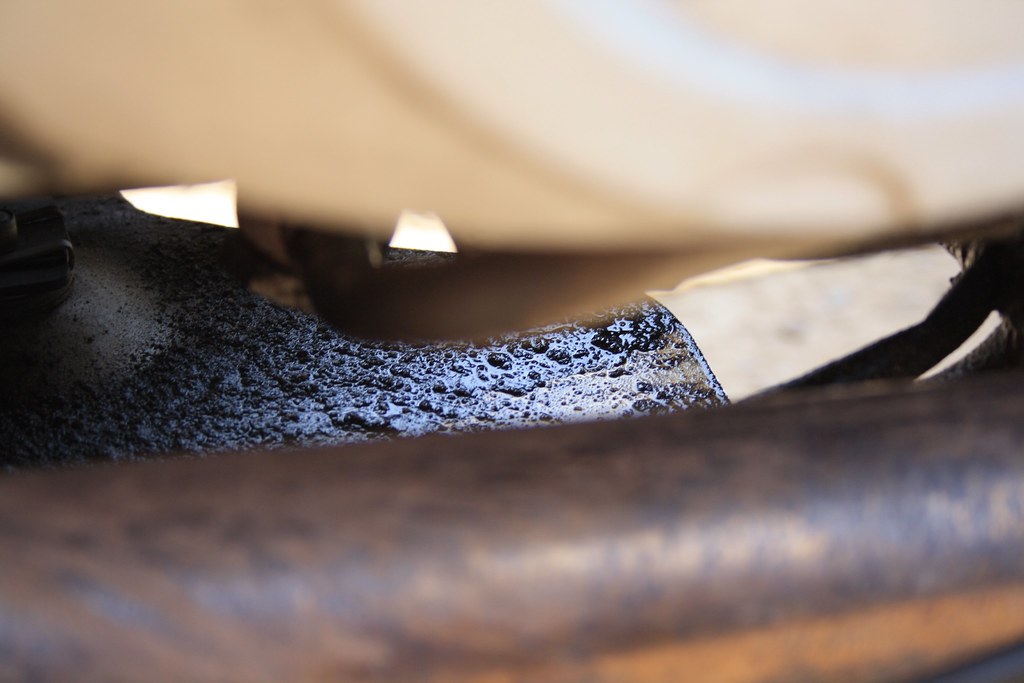 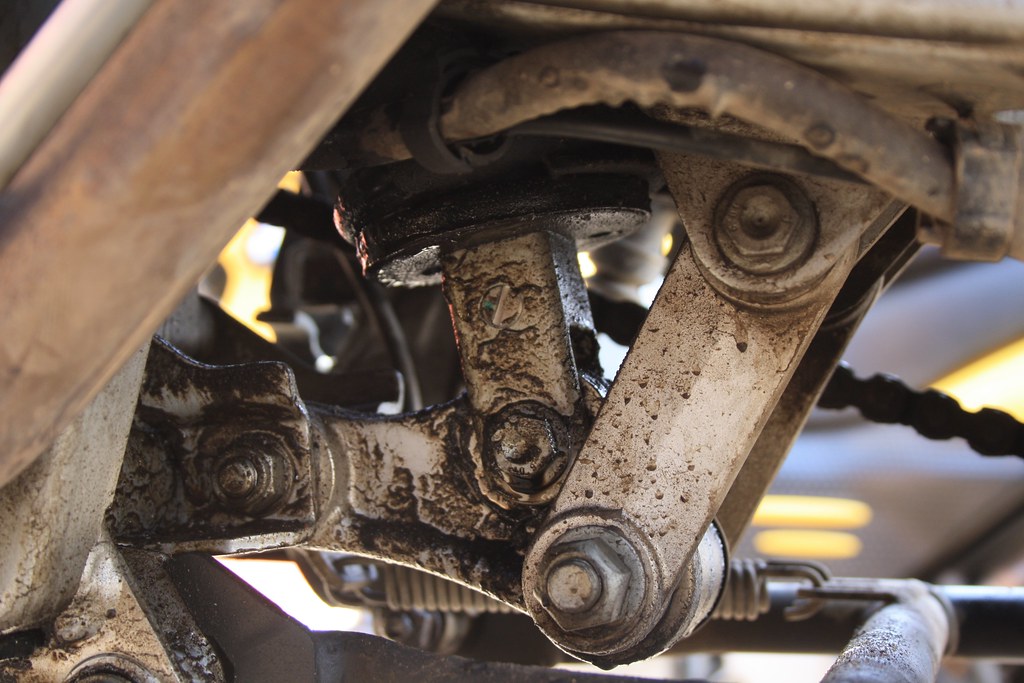 Back on the road and through more desert, until it’s time to stop for gas. When we see towns that are big enough to have gas, we always stop, even if our tanks aren’t empty, because we might be about to undertake a 170-mile stretch that has no gas stations (the longest stretch so far in Chile where we haven’t seen gas).

So we’re filling up at a gas station on the outskirts of La Serena when a white guy with crazy hair walks up wearing a RevIt Cayenne Pro Jacket and speaking English. He’s got a KTM parked in a spot that was obscured by a pickup truck when we came in. Holy shit. “We’ll come around as soon as we’ve filled up.” I say, and then we do.

Beto and his girlfriend Tracey are riding two up from Colombia to Ushuaia, and then possibly around the world afterwards. They’re trying to figure a route that doesn’t involve a carnet, which seems odd to me, but hey, if it’s possible it saves a bunch of money. Unfortunately they’ll have to skip most of Africa. 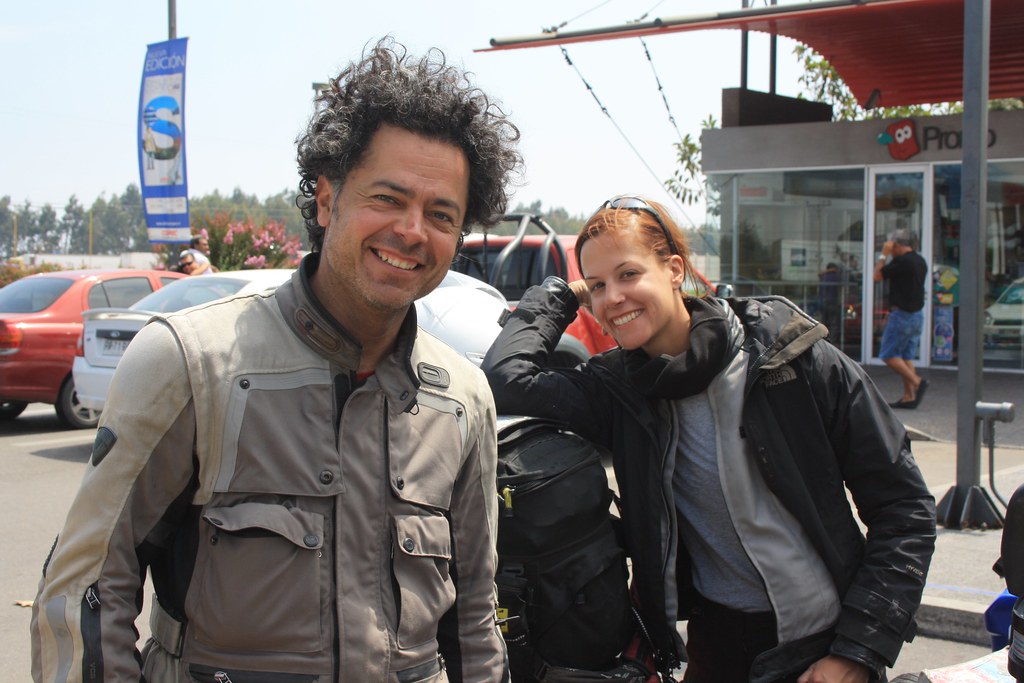 His KTM’s been holding up better than our BMWs but one has to wonder what a KTM rider does when their bike needs fixin’ on the road. It’s as modern and specialized a bike as ours, but with BMW there’s at least one dealer in almost every country (except Argentina for some reason).

There was a curious moment when someone mentioned his jacket and I pointed out that it was the Cayenne Pro, “…the precursor to the Rev’It Defender“, and he was all “But I just bought it new.” I’d apparently just popped some small bubble… oops. “It’s a great coat” I said, “I was considering it before I got this one one closeout. Plus it’s like $400 cheaper than the Defender ” I guessed. Turns out it’s $150 cheaper. I must have been thinking of the new Klim jacket… anyway…

We have a nice chat for a while, and then hit the road knowing we can’t make Santiago by nightfall, but figuring “Hey, we’ll just camp tonight.” The plan is to eat around six, then avail ourselves of the first good camping spot we see. Unfortunately, immediately after La Serena the road becomes a toll road with speed limits of 120kph, a divider, and an increasing population density which results in people starting to put fences up around everything. Mother Fucker.

We eat at a gas station / truck stop thing where we see a couple bikers we’d passed earlier, one of whom was riding a local cruiser and forced Dachary to slam on the brakes or get squished a while back. They made no move to talk to us. We returned the favor. We discuss the situation with the fences. We still want to camp, we’re just worried it’s going to be hard.

(Dachary’s note: by the time we get to the service station, we’ve been on the toll road for around two hours and the 120KPH speed limit is wreaking havoc with me. It’s around 75MPH, and we haven’t ridden that fast since leaving the US. So there’s the mental difficulty of going that fast, when we’ve gotten used to going so much slower for so long. Also? My lack of laminar lip is really hurting me with speeds this high.

I had the lip when we were riding interstate in the US, and the lip funnels the air up and over my helmet. But without the lip, my Z-Technik windscreen blows the air directly at eye level. So it pushes back on my helmet, pushing it against my forhead, and the wind also catches the peak of my helmet and pulls my neck up. I try to crouch down behind the windscreen, which helps, but by the time we get to the gas station, I’m fatigued and headachy, and my back, shoulders and neck ache from the wind. I just want a break. We normally wouldn’t stop for so long, and I wasn’t planning to eat at 5pm or eat at a gas station, but I wanted to sit down for a bit and I honestly could have been happy stopping for the night there.)

Back on the road shortly after 6, I spend the next half hour counting how many good places I see to pull off and camp either where we wouldn’t be seen or where we’re far enough from the road it wouldn’t matter. It seems to be about four per half hour. So, we’re ok but concerned it may decrease as we get closer to Santiago. “At 7:30 we’ll take the first *good* place we see. Ok?” Dachary agrees. Just after 7:30 Dachary asks “why don’t we try this exit.” I’m not convinced it will work out, but what the hell. We go…. hmm, no, not looking good. We pull over to turn around and i notice a dirt road to the left with a sign that says “Cemetery” … people don’t generally visit cemeteries at night, and sunset is not even 40 minutes away…. We go in. There’s an archway leading into a large rectangular courtyard with a dirt road leading to an archway in the far side, through which is the actual cemetery, but between the archways is just one short, tree-lined, dirt road with slightly overgrown open space on each side…

We think this’ll do just fine.

We set up…no not there… over… hmm prickers…hmm.. horse poo… err… here. Yes. We set up the tent. We move the bikes. Hmmm it still seems pretty light out. Check the GPS to see what time sunset is. “Oops. Sunset’s at 8:40”. We’re not sure when we got the extra 40 minutes but, whatever. I snap some pics, Dachary settles in for the night, and I wander off to find somewhere to poo….The ground is nigh-impossible to dig a hole in but, “oh, that’ll work”. 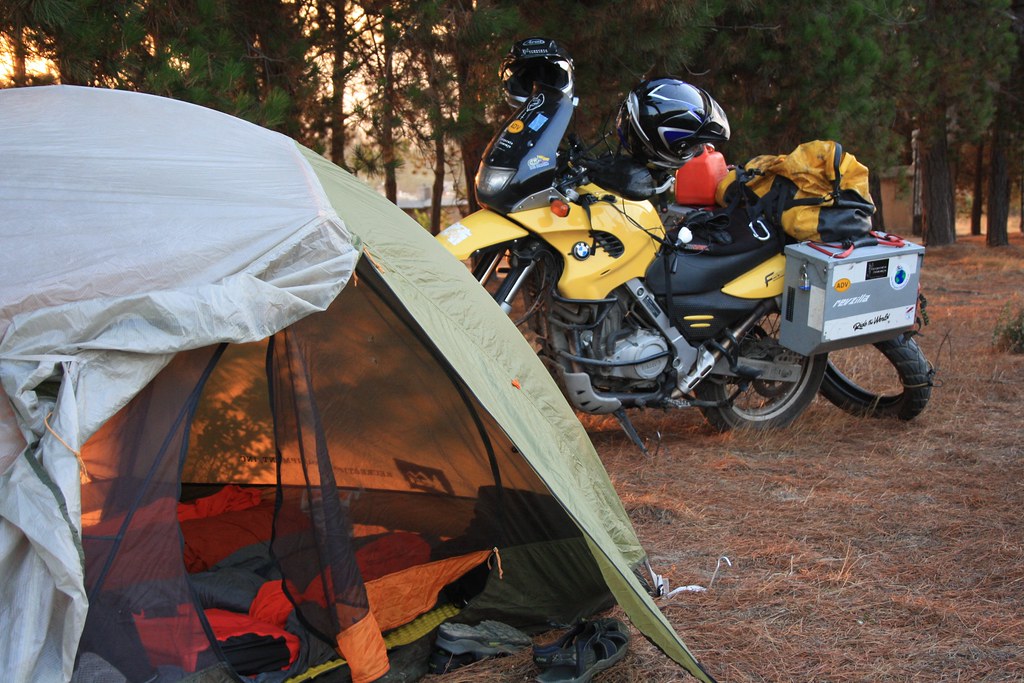 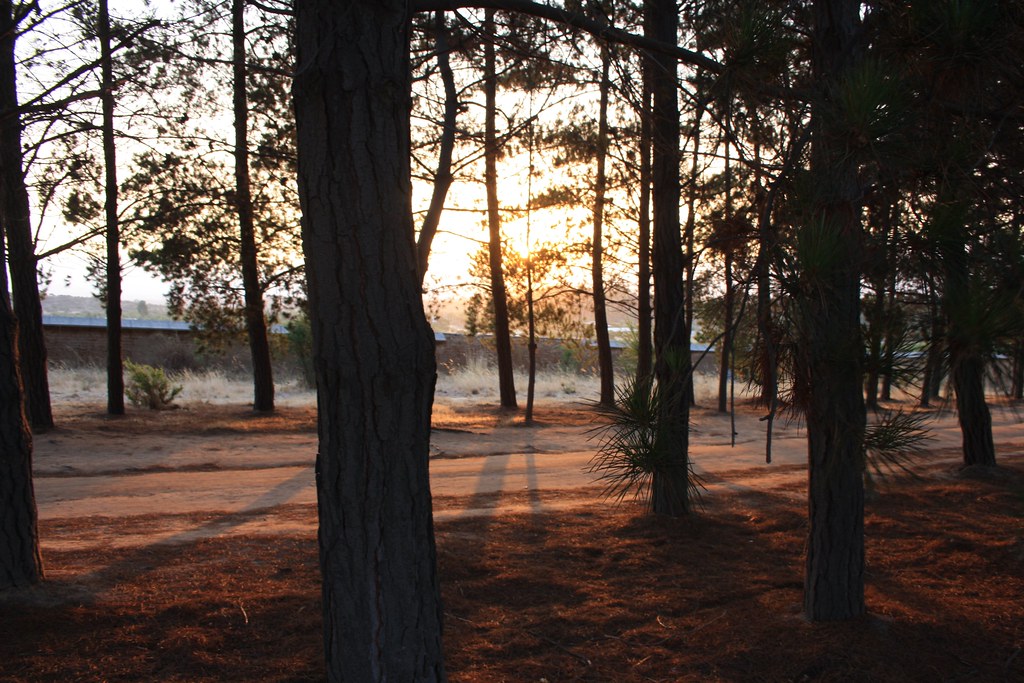 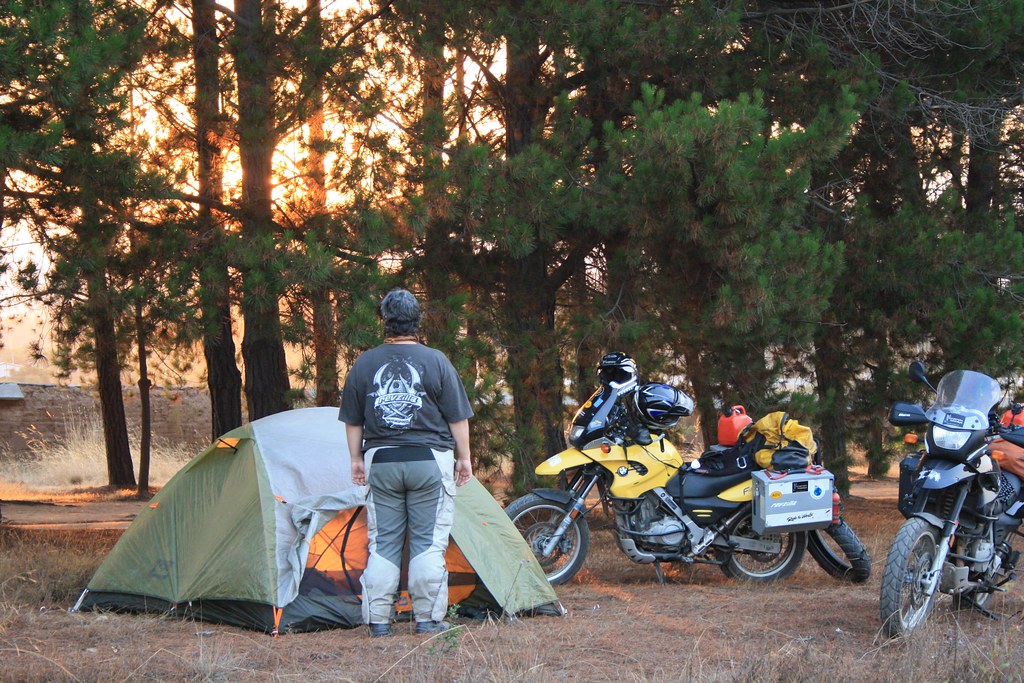 We hear car sounds. No biggie, there’s a road just down the… A car drives through the first archway. Dachary is pantsless in her sleeping bag. I have my pants around my knees and am shitting in a hole.

Fortunately the hole I’ve chosen is behind their line of sight. I wipe quickly, try to pull up my pants before standing up, then shove the toilet paper up under my rain liner (it’s slightly chill so I’m wearing that) and the trowel up my sleeve. I’m thinking the only way I could get more disrespectful is to actually shit on their family plot, so walking around holding a roll of toilet paper in plain view is probably not the best choice.

By the time I get to the tent they’ve gotten out of their car and gone into the actual graveyard. I climb into the tent, but leave my feet hanging out the door (shoes can’t come in) in case they come over to discuss how bad we are. For the next ten minutes we whisper to each other. We’re working under the belief that humans don’t like confrontation, or the unknown. By hiding in the tent we’ll be as non-offensive as possible (no big gringos wandering around their graveyard), and we’ll make it require the most effort if they do think about confronting us.

We wonder if they’ll call the cops. I’m voting they won’t.

I go back to my hole to get some extra wipes. ;)

Dachary starts unraveling the headphones for some Torchwood. I get out the iPad, check what’s currently loaded, turn around and…. she is sound asleep.

It’s still early, like 8pm, but she’s bushed. I read for a while until well after full dark then join her. No cops, and the neighbors are quiet.