Did I mention we lost another hour when we came into Chile? That’s two hours lost in less than 48. We woke up at 9 Chilean time. 7 our time, which is when we normally have the alarm set. Breakfast was included with the room, but we thought we were too late to get it. McDonalds. McDonalds works. Not the most spectacular breakfast offerings but not bad either. I head out and discover that Chileans have no appreciation for breakfast, if McDonalds is any indication.

Main menu item? Two small croissants (cold) and a cup of coffee. Alternately there is a ham and cheese sandwich (with coffee), and, of course, a small hamburger (with coffee). This was not good. I ordered four ham and cheese sandwich meals with orange juice because, judging by the picture and the croissants, they weren’t going to be big. Then, in case they sucked, I ordered two yogurts, which I discovered has a weird pronunciation that I’m still having trouble getting my mouth around.

Back to the hotel room I inform Dachary of the sadness that is Chilean McDonalds breakfast and we open the sandwiches. They’ve taken hamburger buns (the cheap ones) turned them inside out and toasted them. Then inserted a cold piece of ham and cheese. It was the most pathetic excuse for a sandwich I’ve ever seen. 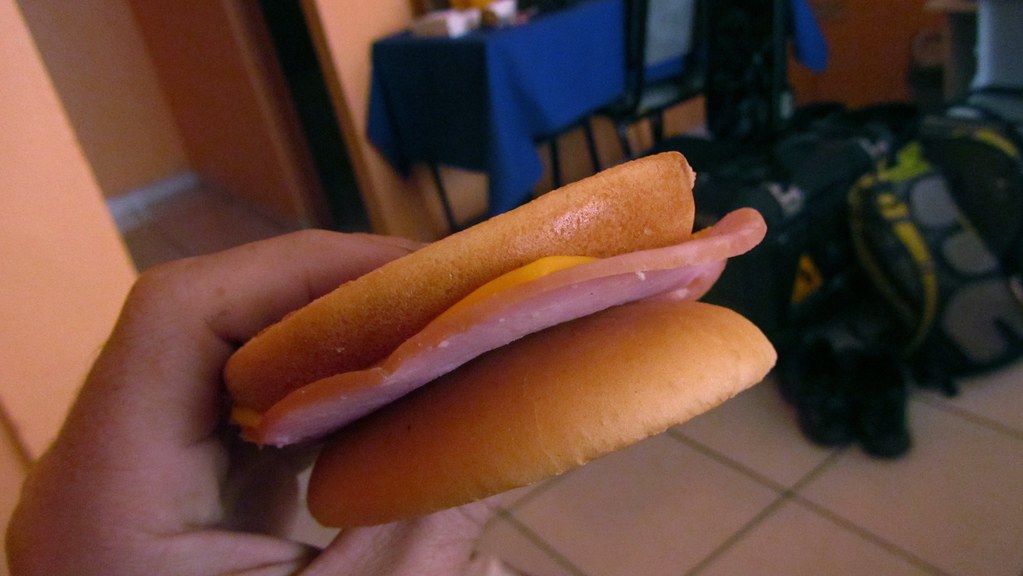 The yogurt parfait thing was exactly the same as in the US (way too sweet) but better than the sandwiches. Also, no hash-browns! And, still the worlds slowest McDonalds even though there was only one other customer.

Side note: the tables all have a metal loop under them with a caribener attached so that you can easily clip your bag to the table while you eat. I guess at some point in the past they’ve had trouble with people snatching bags from tables and running off while the owners are somewhat trapped trying to get their legs out from under the table.

Dachary finishes off some of her work and I get a post uploaded. We were too exhausted to do much of anything last night. Then just before the noon check-out we manage to get all our shit together and out the door. Not bad considering we woke up at 9, had breakfast and Dachary had work to do.

In the parking lot we discover Dachary’s bike needs a bit more air in the tires since our altitude has changed so dramatically, address that with the CyclePump (so loving that thing) and head out. Before going back into the desert we stop by a massive hardware store we saw (Think Home Depot) for new padlocks. I’ve lost one somewhere along the way and the other one is getting a bit ornery. I could fix the latter with some WD-40, which we have, but I still need another lock for the other pannier, because the built-in locks on the Happy-Trails panniers are as bad as the built-in ones on the Trax cases. Only one is working for reasons I can’t explain, and they get obstructed by the contents of the cases.

Anyway, in ask for padlocks, see only one choice… that can’t be right.. get an employee who leads me to a locked case of padlocks. Right… I buy a four pack, which is more expensive than two two packs back gives me one key for everything. Then it’s back to the desert, via a road that circumnavigates it from the north which Dachary found on Google maps. One wrong turn later and we’re free of it’s grip. 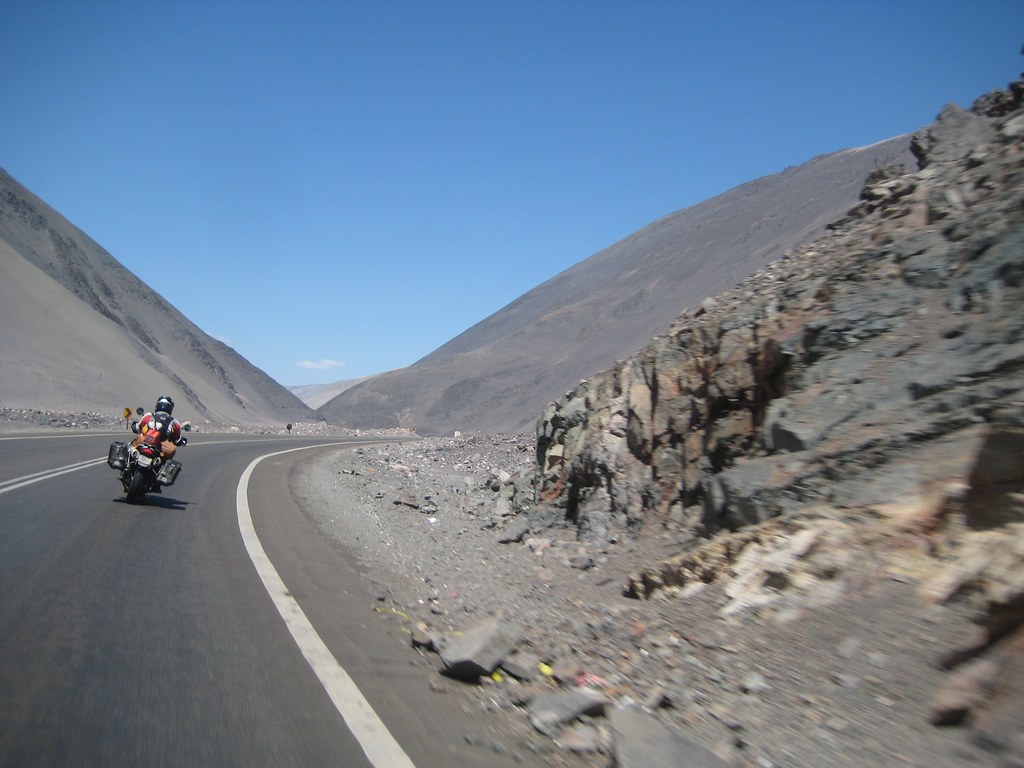 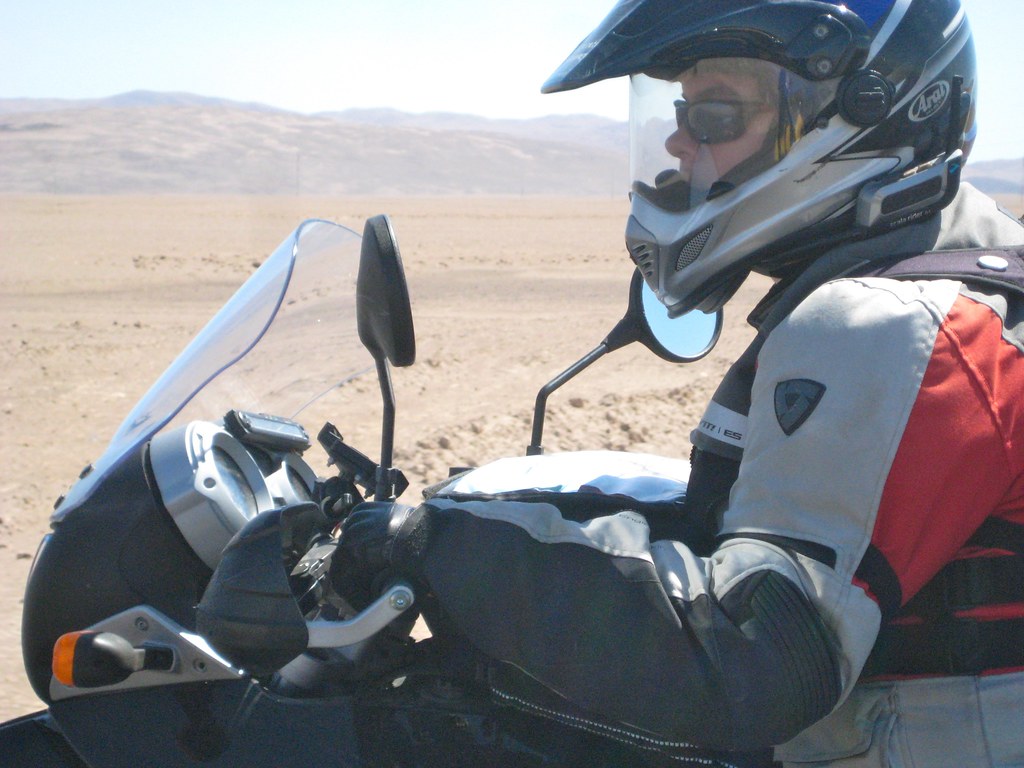 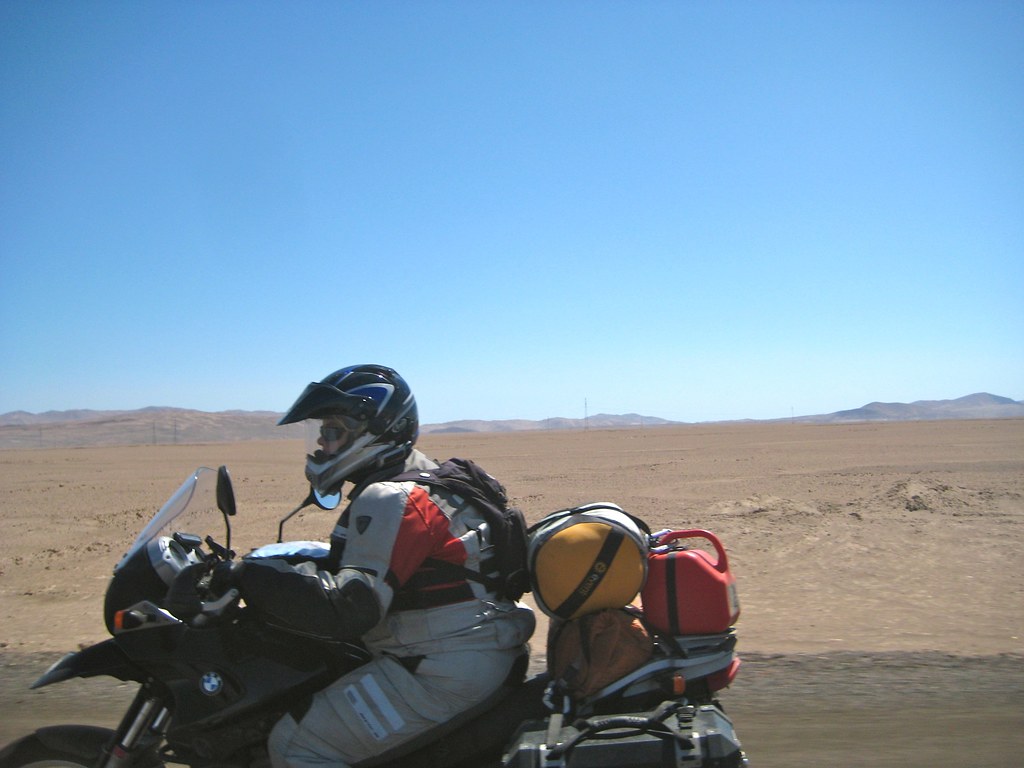 New rule: in Chile, you get gas when you see it, because the distances between stations can be pretty big and many of the towns on the map don’t have gas. Some towns, on the other hand consist entirely of one gas station as far as we can tell.

We stop for lunch at a sandwich shop by a customs checkpoint that doesn’t seem to apply to us. Where we notice a couple adventure bikes that appear to be from Brazil, the riders probably off in one of the restaurants and sandwich shops. I voted for the one with the nice, shaded chairs in the breeze where we we’re served a spectacular steak and cheese sandwich. So far the sandwiches have been crap, but this was just a simple baguette-like bread, with some cheese, and some sliced beef. It was great.

Eventually the riders come out from a restaurant across the street and I walk up to the first one as he approaches the bike sitting in front of us. I ask him where he’s from, “Brazil” he says and puts on a glove. “And where are you going?” “Brazil” he says and puts on the other glove. “We rode down from Boston.” he nods and gives me the distinct impression he doesn’t give a shit… right then. “Adios” I say as he’s starting to mount his bike. His companion has just walked by and shown zero interest even though there are two fully loaded adventure bikes next to his.

I walk back to Dachary and notice something. He and his friend may have been riding BMW R1150’s but his jacket said “HOG (Harley Owners Group)”, and while I hate to generalize, Harley folk and adventure riders rarely seem to see eye to eye in the US. There are exceptions of course, but…

We ride on, until around six clock we pull over at a gas station and decide that we should get rid of the shite Peruvian gasohol we’ve got in our cans and replace it with real gas. The logic being that real gas gets us more mileage, and when you’ve run out you want as much extra mileage as you can get. Unfortunately neither of us can figure out the God Damn Mother Fucking Piece Of Shit Safety Valve on the cans. The icon says to turn it around the neck in one direction to unlock it. You do, but it has no effect. You turn farther and it just breaks some spring. There’s only a teeny hole in the spout which looks like a breather hole, and I’ve no clue how any real amount of gas is supposed fit through it. Fuck it. I’ve spent twenty minutes in the past fucking with this thing and I don’t give a shit any more. I take out the leatherman and attack it with the blade, drilling a hole through the neck of the spout where there should have been a hole in the first place.

I finally get this working, and Dachary, who has been holding off from attacking hers in case mine no longer closes properly, discovers the secret to making it work. You have to push down, hard, on the turney piece in addition to turning, but there’s zero indication of that anywhere on the thing. If I have pulled the neck out and put the damn thing back in in the pour position I WANT gas to escape. I don’t need a fucking safety feature to protect me from gas escaping. That’s the whole point of putting the spout on pointing that way. Fuckers. At least it’s not one of those stupid ones with the Mushroom end for California’s rules. Those things leak constantly and the end is obnoxious.

We end up getting in a tiff over what to do next. Eat and stay (at the decent looking hotel), eat and ride, ride and cross fingers. Dachary doesn’t want to be the one responsible for us staying even though neither of us want to skip eating, and she doesn’t want to eat and then ride since we’d not ride for long. She gets upset and decides we’re going to skip eating and ride…. unfortunately this means we may end up with no food tonight because it’s a crap shoot if any of the towns will have a restaurant, and even more of a crap shoot if they’ll have a hotel.

I’m fine with just camping, but I’m concerned about missing dinner and she’s not talking much. We ride for nearly two hours and sunset’s coming soon. We come to a customs building where everyone has to stop, not just busses and trucks. We sit around trying to figure out if we’re really required to stop, but then normal cars are stopping and doing shit so we grab our customs papers, and with the help of an employee figure to take them to the window, get them stamped and ride out to the gate where they check that we’ve got something to show we’ve been inspected (they checked other people’s trucks but ignored us) and ask if that thing over there is a restaurant. It is. We go. It says open. We get off the bikes. It isn’t.

There’s another one next door. It actually is open. We order and while waiting for food I wander off in search of a hidey-camp spot because the sun will have set and it may be full dark by the time we are done eating.

One abandoned complex with a concrete wall we can drive through and a no-entry sign. Across the street is a mud-brick building with two and a half walls left. It’s off the main road about 200 feet and we could probably set up camp behind it. Then, there’s a road behind the concrete no-entry wall…. hmm… it curves around back, down a hill, past an obstruction that’d stop a car but not a moto, and into a big open field with trees and a river. Yeah baby. Hills on two sides and only visible by the back of some shacks at the top of the hill. Coming down here is not doable in a car, which no-one has, and no-one seems to have motos here either, so it’s actual work on foot, and not a wander over out of curiosity thing.

I inform Dachary of the choices. Neither of us like the abandoned concrete structure, and there are dogs who keep running in there and being all barky and guardy. 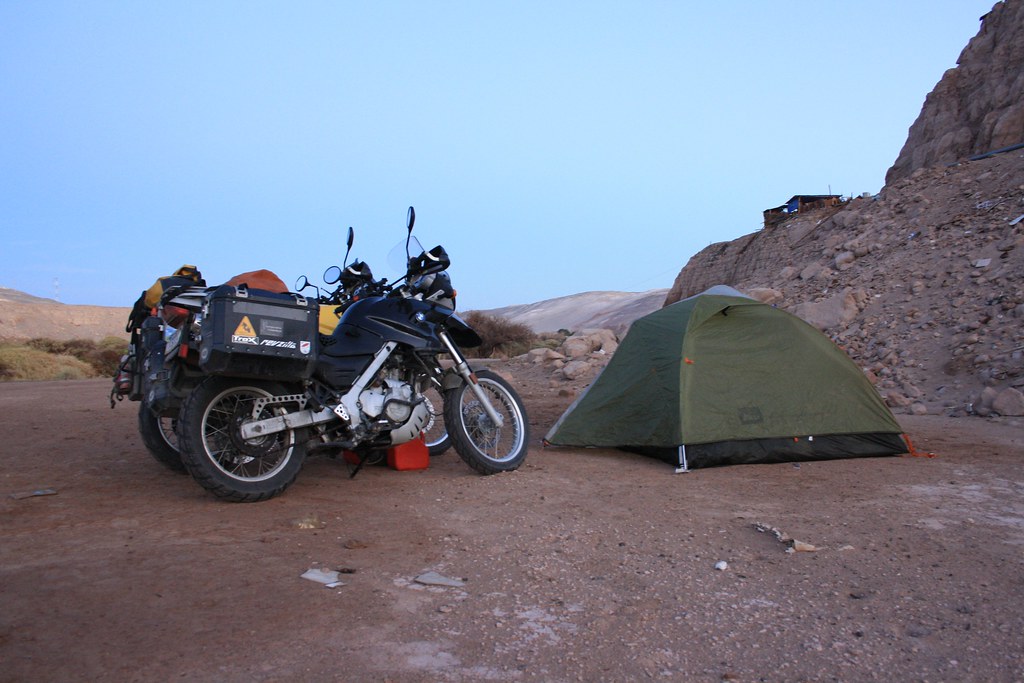 We eat our delicious pork quickly, and pull out, and down the hill. It’s nigh-perfect. We set up camp and dig a hole for… “waste” as full dark comes in. The stars are incredible. Neither of us is Bad-ass Boy-Scout enough to dig a depression in the sandy ground for our hips so it’s a little hard but… We leave the tent-fly off for a while and make love under the stars, then watch an episode of Torchwood before falling asleep.

Well, Dachary falls asleep. I lay awake for a while, not yet in the mindset of being comfortable hidey-camping and worrying about annoying someone by being here, just enough to keep me awake, but not enough to actually consider taking action.

Side note for those of you who say don’t bring camping gear, here’s exactly why you should. Sometimes there’s no hotel, and you don’t want to ride hours in the dark to the next “town” that probably won’t have one anyway. Chile, by the way is as full of excellent camping spots as Peru was. In Chile especially there are lots of hard packed dirt roads leading off of Route 5 that seem to go nowhere. Just pull off on one of those, drive a half a mile, or more, from the road, and set up your tent. Sometimes they curve around behind mounds that’d hide you too, but mostly your tent would be visible but not worth the effort. That’s actually our plan for nights when we don’t specifically need a hotel for some reason like getting posts up to you guys, or doing laundry, or things like that.