We’re both exhausted, but wake up a bit before the alarm and Dachary has a *splitting* headache. The kind where you have to tell people to talk more quietly because it hurts too much to hear them at normal volumes.

When she does get up to go to the bathroom it’s both exhausting and dizzymaking and the cough is making an appearance. She doesn’t have a cold. It’s the altitude. The plan was to go to to Potosi and then to the Salar de Uyuni, but Potosi is at least another 300 meters higher, and that’s enough to require more acclimatization, when she’s obviously not made any progress on acclimatizing to 3,800 meters even though we’ve been at this altitude for two days now.

She wants to go though. She knows that the thing I’ve most been looking forward to on this trip is riding around the dirt roads of Bolivia near the Salar. When people asked me what I was looking forward to seeing, I’d say The Salar de Uyuni in Bolivia. But, to do that with Dachary in this state would not only be stupid, and dangerous for her, I would feel horrible about having put her through it.

The idea of trying to ride a bumpy dirt road, with a headache that bad… nevermind the volume of the bikes or the bouncing of your head with the extra weight of the helmet. That would be agony. Add in the fact that she keeps getting dizzy from walking across the room. No. No, this is not right.

I try and convince her that we need to just head for lower altitudes via the most direct means possible. She feels horrible. She doesn’t want me to miss the one thing I’ve most been looking forward to. I tell her she’s far more important and I won’t regret skipping it for a moment. Plus, the Salar I’ve dreamed of, and the surrounding landscape, was during the dry season. I’d do it in the wet because I’m here, and how often do you get the chance, but I’m not a big fan of riding in mud, and I suspect that the roads are going to be half mud, half wet sand, half who knows what… A lot of work, for two people who are getting exhausted by minimal amounts of effort, who are ready for bed half-way through the day…

Just imagine, you’re weaker to begin with (best case scenario), and then you go on muddy roads. You’re pretty much guaranteed to drop the bike in the sloppy bits, then you pick it up and you just want to stand there for ten minutes from the exertion, then repeat… Except, for Dachary, throw in the dizziness, occasional coughing, and a headache somewhere between bad and splitting.

Eventually she agrees, and we head south. But, before we can do that, we have to address the fact that the lock on one of her Trax cases has decided it won’t unlock. This particular lock has always hated me, and I could never get it open. When Dachary tried to use my key last night but it broke off in the lock, fortunately leaving a stub that we extracted with the Leatherman. This morning, it doesn’t want to work with hers either and we don’t have another spare, and this key also undoes the locks that attach it to the bike so we’re kinda concerned. I vote for giving it a careful attempt, and then removing the lock (easy to do when it’s open). We could pry it open but it’d surely fuck something up.

Eventually she does get it open, removing the lock works, but makes it unable to lock (obviously). So she sets about trying to fix the lock, and realizes it’s the tab that the lock turns into a hole, not the locking mechanism itself. She bends the tab the right way and voilla. Fixed lock.

We say goodbye to the DJ’s outside of the hotel, and while we do I notice that I have mild pins-and-needles in both arms from just standing there. Altitude’s not happy with me. Forty minutes later we’ve made it through two miles of traffic and, with the help of a local, one blue string lane divider (don’t ask), and dodged three oncoming busses in our lane. We decide that even though there are a couple things we’d like to pick up in a town the size of La Paz the traffic is insane, the drivers swap lanes relentlessly, and we want to get out of here as fast as possible.

Side note: no-one in La Paz appears to own a car. Instead there are Nissan Caravan’s filled with seats that ride around, with a person whose job it is to yell the destinations out the window to anyone within hearing range, or just in the off chance that there will be someone in hearing range. If someone likes the destination they run up, and the yeller handles the door and the luggage. There are approximately four of these vehicles for every human in La Paz. They constantly block the right lane and foul the left as they pull in and out of it.

After a while you build up a few rules for dealing with cities with no signage. If everyone is suddenly going right. You go right too. If you suddenly cross a major road heading in the right general direction, you take it. If it crosses a road that’s even more major you might want to take that too unless it’s going in the opposite direction you need. Things like that. Somehow we end up on the right road heading south out of La Paz.

We make it like 70 kilometers from La Paz and stop for lunch at the first place we see, which is notable in that it took like three small towns before we found somewhere to eat. There was nothing. It was weird. Anyway. We don’t think this is even a town. It’s just a place with two hotels that both have restaurants in them. We go in, and get a delicious lunch of roast beef ribs preceded by corn soup, and followed by bananas in a little yogurt. It’s the “menu de dia” and it was all delicious and exactly what we needed. Turns out the guy speaks a little English, and we ask him if he knows of any towns along our way that might also have hotels. “No. None” he says. He used to travel that road a bunch and doesn’t remember any hotels along the way.

The problem here is that we could probably find something at the border (he agrees) but the border is on top of a mountain, and we want to go up in altitude for the least possible time, and definitely don’t want to spend a night there. Especially since we’re guessing it might be close to 5,000 meters. We don’t want to camp in Bolivia because it’s quite chilly at this altitude. How chilly? We drove through an area with clumps of snow still clinging to the shadow side of little grass tufts. Nights would be damp and very uncomfortable. Our gear doesn’t do sub-freezing temperatures well.

So, Dachary suggest we call it a day early so that she can do some work that’s almost late for one of her clients, I can change my tire, and we can rest. It’s a good idea, and much as I really want to not stop so early, it’s the logical decision. Especially in light of the timings for the ride that the guy has given us (Riding down the mountains in the dark is bad).

So we go across the street to the other hotel. Room is 100 Bob (about $15) but mediocre at best. Come back, ask the guy about a room at this hotel. Turns out he’s not just the waiter, he’s the receptionist for the hotel, but he’s full up. When Dachary goes to pay later he tells her that if the place across the street doesn’t have any rooms to come back and he’ll see if they can “fix up” a room for us. We don’t think it was anything funky, we think he was just being helpful and probably had a room that wasn’t currently in a state for people.

So, across the street, pull the bikes in to an inner brick courtyard and set to changing my rear tire. It really was a good idea, because we almost never stop early. But I fear how tired this’ll make me. It goes pretty well though. We’re getting fairly good at it, and the tire has about 12,000 miles on it, so one good squeeze with the BeadBreaker on each side, plus some squeezing with the hands is all it needs to loosen it up, but when we pull out the tube we both think… “oh shit” 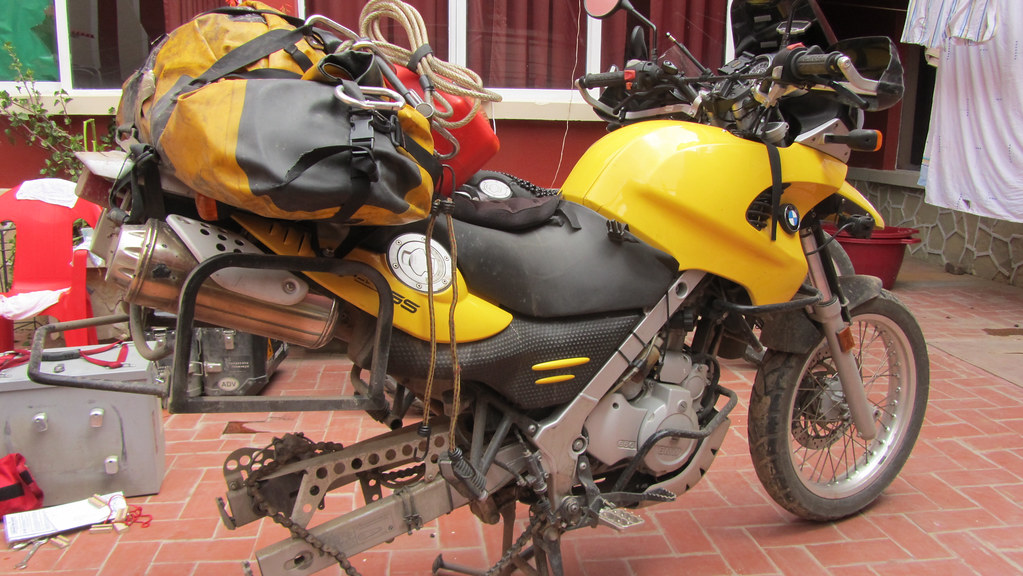 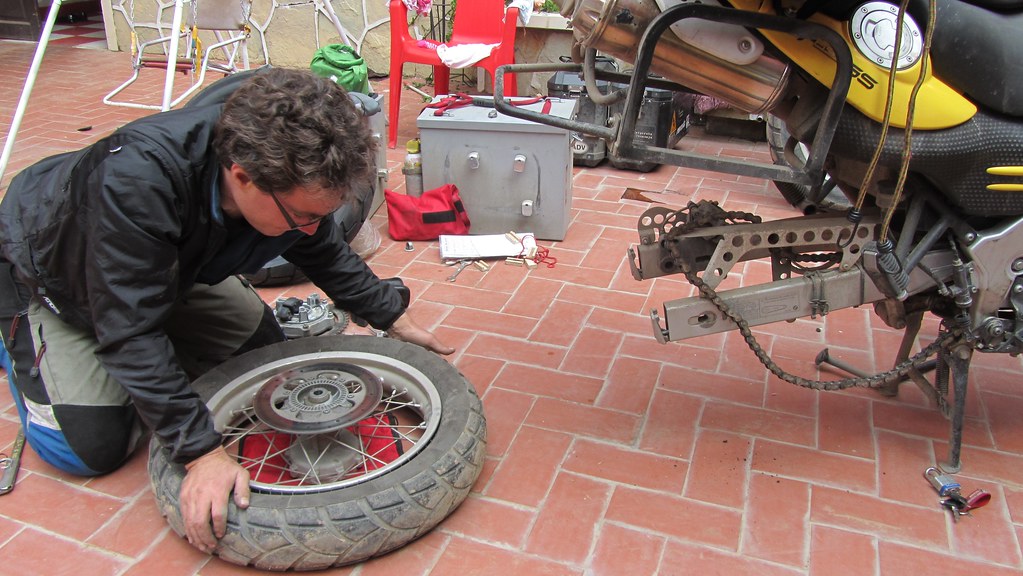 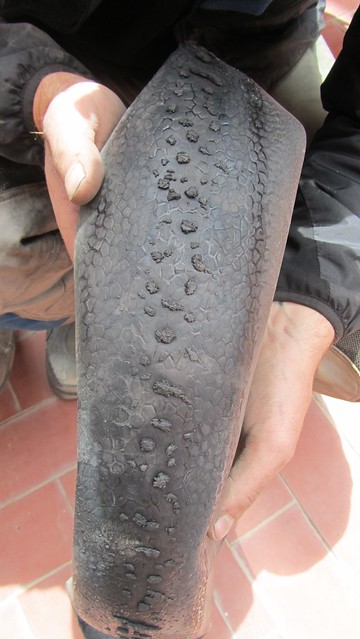 All those little bits? We feared they were bits of the tube, but no, they’re bits of the tire’s carcass. We’re not sure where exactly they came from, but I suspect it had something to do with the day a couple months ago when I unknowingly rode with the pressure at 25(ish) instead of the normal 33. Probably heat build up and such… But the little pieces flake off the tube with a little pressure, so Dachary sets to giving the tube a manicure while I start putting the new tire on. 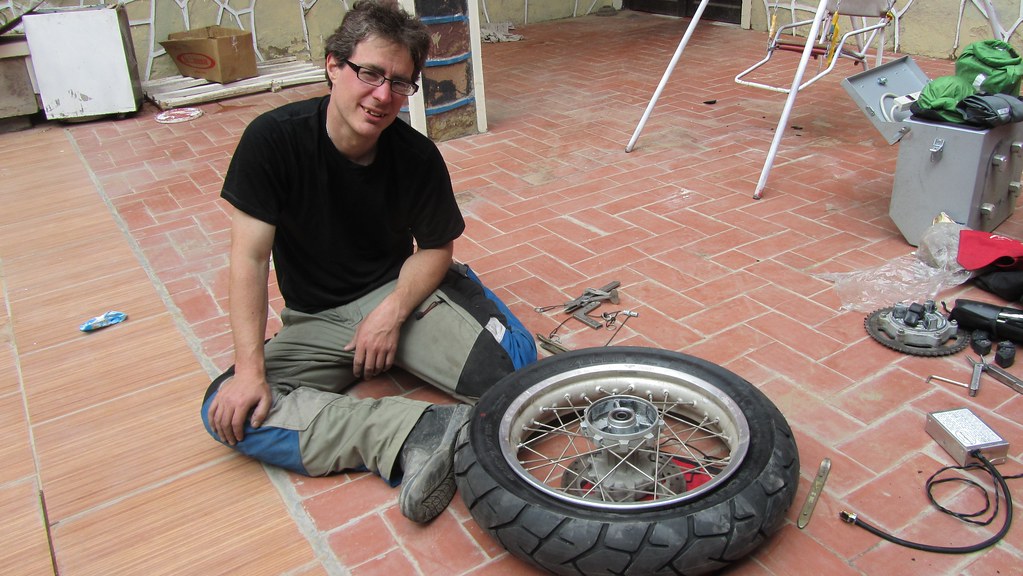 Tire on, tube cleaned, tube in, a bunch of pulling with the tire irons, hook up the CyclePump, add a little goop to the side that’s going to need to come up the farthest to set the bead and….. holy shit. We’ve done this four times now and have never had the bead set so perfectly. Maybe it’s that this time it’s a Metzler Tourance tire and the other tires were Michellin Anakees. Usually it takes a lot of time and sometimes a bit of luck to get it the same distance from the rim the whole way around, but this time it slides into place perfectly, and we barely needed to over-inflate the tube to do it. (Note: three days later and the tube’s still doing fine) 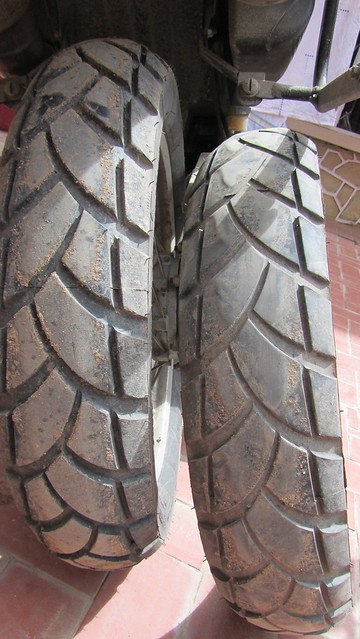 I must say the BeadBreakr and CyclePump are two of the best purchases we made for this trip. I can’t recommend them highly enough.

We get the tire back on and just as we’re checking the chain tension the rain that has been threatening starts up. Light drops at first, but we know the real stuff is not far behind. Adjust Adjust! Tweak tweak! Wrench Wrench! Pack Pack! As we’re pulling our panniers up the stairs and into the rooms the real rain starts in.

Back in the room Dachary avoids work, and we read for a bit. Then down to dinner, a little more avoidance, and eventually I coerce her into doing it by withholding sex. Seriously. But, you can’t blame her. Would you want to write newsletters about house buying and mortgages while you were on a trip like this? Ugh. It is so sad that she’s had to carry around a book about home buying this whole time.

It should be noted, that Dachary is not-so-secretly hoping that one more evening at altitude will be enough to acclimatize her so that we can go do the Salar. She really doesn’t want to let me down. I don’t believe for a minute that her symptoms will have subsided by then to the point where she’s up for that, but she’s a stubborn one. And, I love her.