Day 1’s casualty was Kay’s glasses. Day 2’s casualty was my boots. I’d gotten the Rev’It Rival H20 boots just a couple of months ago from <url =“http://www.revzilla.com/">RevZilla. I called up Neil at RevZilla who spent nearly 40 minutes on the phone with me measuring the calf-size of boots and we decided the Rev’It boots would be my best bet. We didn’t know it until today but it turns out women’s calf muscles extend lower than mens, which makes them wider at the top of boots, and explains why it’s so hard to find an adventure boot that fits a woman well. Anyway, they were great – up until a few weeks ago.

In prep for the trip, we’ve been doing a lot of mini-trips around the area. A few weeks ago we rode down to Rhode Island and rode around with some ADVRider folks in Arcadia and Pachaug. I’ve only been riding for about 7 months, and my inexperience combined with the stock Trailwing (Deathwing) tires on my bike = me falling in the mud a lot (and cracking two ribs). The boots stayed waterproof on this, their initial foray into wetness, and I didn’t think twice.

Fast forward to a week or two later when I tried to don my boots to ride the bike to a friend’s house for Thanksgiving. I couldn’t get the left boot to zip up properly. I fussed with it for a few minutes and then handed it to Kay, who was able to work the zipper up and down a bit past the problem spot. It seemed like the zipper was working in so I put it on and rode out. Zipper was even harder to zip on the way home, but I just figured there was some dirt in the zipper from its immersion in mud and thought it would work its way out.

When I put on the boots yesterday, I realized there was a spot where the zipper wasn’t zipping properly. Today, I unzipped the boot completely and tried re-zipping it to get the teeth re-aligned. It wouldn’t go. An even larger portion of the zipper was borked. We manhandled it past the trouble spot and through the hard part just above that and decided to give RevZilla a call and see if they could help us, since we didn’t have time to wait around for a warranty repair. More importantly, we didn’t want to get stuck south of the border with boots that wouldn’t stay closed properly (or at all). 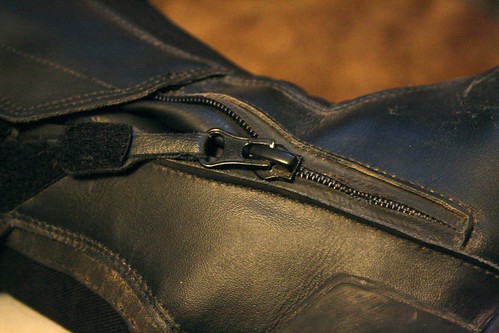 See those tiny zipper teeth? Ridiculous idea on something that’s going to be down near the dirt. We’re both 100% against the idea of getting motorcycle boots with zippers now – particularly zippers with fine teeth.

I spoke with Chris at RevZilla, who gave me the contact info for Rev’It and offered to help expedite the repair. Unfortunately, even an expedited repair would mean I wouldn’t have riding boots for several days, and we didn’t want to wait around in the cold cold north, in costly motels. We didn’t want to spend the cash, but I made a decision to go to RevZilla since Philly was on our route and see if they could find me another pair of boots. Of course all of this calling around took time and it ended up being after 10:00AM (when Rev’It’s offices opened) before we finally hit the road.

Got to Philly at around 1:45 and the staff at RevZilla were just as awesome in person as they have been on the phone and on ADVRider. There we met Chris who had helped me on the phone, Patrick who helped me try on pretty much every boot they had in my size, and Anthony who does the video/is an owner (the owner?) at RevZilla. Patrick’s family owns property in Costa Rica and he’s ridden as far as Panama and into the Darien Gap on an F650 (he’s hardcore!) and was able to offer us lots of helpful advice.

First though, we had to get the boot off. At some point between putting them on and riding to Revzilla the zipper had come open all the way from the bottom. It took Kay pulling with a Leatherman to get it to move, and then the zipper pull came completely off.

In the end, the pair of boots that fit me best (i.e. fit over my calves, but also fit really well) was the Dainese Visoke D-WP Boots. Sad for me, they were expensive and I hadn’t planned to buy new boots – but they fit so well. Actually, they were the only ones that fit properly at all. And they’re so comfortable. And they kept me nice and warm even in the low 30s we were riding through for much of the day. Of course, we totally forgot to take a picture of me surrounded by opened boot boxes.

Stood around and chatted with the guys at RevZilla for a while and I still can’t say enough good things about these guys. They’re real riders who actually care about their customers and I can’t recommend them highly enough. They’re taking care of the warranty exchange for me on the Rev’It Rival H20 boots (which I’m gonna turn around and sell when I get home – anyone need a pair of boots?) The guys came out to check out the bikes and Anthony took a couple of pictures with us – all three of them were really cool. 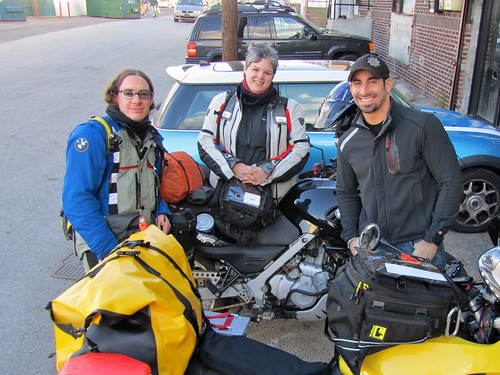 Hadn’t had lunch yet and by the time we left RevZilla it was 3pm. Anthony had recommended a Pork Shack around the corner for lunch but they closed at 3 so we had to make due with the IHOP across the street. Not the most exciting cuisine, but warm food relatively cheap. By the time we got back on the road it was close to 4PM. We rode until around 5:30 to get to the Days Inn hotel we had chosen for the night (because it had WiFi and wasn’t exorbitantly priced) in Aberdeen, Maryland.

Day 2 tally: 242 miles. Milford, CT to Aberdeen, MD. Again, a short day, but we spent a while at RevZilla (and getting off the interstate in Philly) and hit the road late because of all of the calling around. If the attrition continues at this rate, we’ll be broke sometime in Mexico – gotta stop having these expensive malfunctions! But it was lucky we were near RevZilla and they were open. I am loving the new boots and hopefully the unexpected expense doesn’t set us back too far in the long run.

Goal for tomorrow: break 300 miles! (We’ve done around 400 comfortably before, but the cold, the wind, the fact that the sun sets around 4:30pm and all of the delays have been costing us mileage. We want to get south where it’s warmer, damnit!

Side note #2: Today’s unsung hero was the 5-function digital meter we got from Aerostich. It includes a battery voltage meter, which we were able to watch while riding and determine when our heated gear was drawing too much power. In stop-and-go traffic, there’s less available voltage and having the heated gear cranked could prevent the battery from charging properly. With the meter in place, we could keep an eye on our voltage and turn down the grips/jacket as needed to keep our batteries happy.

Side note: #3 We’ve mentioned RevZilla before, and we’re proud to be sporting their stickers and shirts now.