It’s that time again. Time for the Corporate Runaways to set out on another adventure. It’s another little one this time; just 6–8 thousand miles around the US.

First though, let me back up and set the stage. In our last adventure we headed north to Nova Scotia: one of us on the Ural, the dogs in the sidecar, and one of us on a BMW F650GS.

It was… an educational trip. Mostly we learned how much it sucks to be wet day, after day, after day, after day…. We also learned that while the dogs love riding in the sidecar, we felt bad about keeping them in such a small space when you’ve got the sides rolled down to keep them dry for days on end.

So, as Dachary mentioned in a quickie post we flew out to Flagstaff AZ, made a mad dash back to MA in an untested 1981 Diesel VW Vanagon. She caught fire once, and let us know we’d made a great decision. Since then Dachary’s been working her ass off, with a little help from me and Kevin (one of my coworkers) to modernize Sally (the van): propane heater (so we don’t freeze at night), modern fridge (duh), and a 140w Solar Panel to power the fridge, the heater’s fan, laptops, and anything else. There’s a thread detailing the work over on The Samba if anyone’s interested. 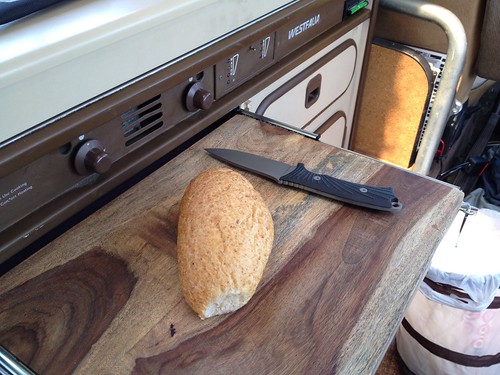 Now, with Sally’s camping systems mostly modernized we’ve set out for this year’s Overland Expo, which happens to be back in Flagstaff. Week one we’re just making miles. Weeks two and three we just don’t know. We may spend a week wandering around the Southwest before returning to Flagstaff to have one of the few experts on these old beasts do a little work on her over the weekend. Week three… well, we’ll figure that out later.

The trip started off pretty much as expected. The plan was to leave “first thing” in the morning, so we finished packing, running our last errand, and leaving town around 2:30 PM.

Now, Dachary had made it clear to me that at a certain point each month there would be need for regular showering. So, we stayed at a campground, that was well… the owner was a very nice lady, but it was basically rows of gravel with RV hookups beside a freeway. There were technically some trees, but the bathrooms were clean. Fortunately, the internet had prepared us, and we made the call that we shouldn’t try pushing it any farther that night.

Sunday we started fretting about Sally’s lack of power. She’s never been a speed demon, but she seemed to be having extra trouble maintaining speed up hills, and it felt like it was just getting worse. By Monday, we put that together with the ka-thunk sound we got every time we removed the gas-cap and realized there was probably some fuel starvation going on.

Our internet comrades on The Samba helped us figure out how the system works, and set us to checking our “fuel expansion tanks” upon which we would find the vents that probably needed unclogging. Unfortunately, after thoroughly soiling my shirt scooting around under the van in a Taco Bell parking lot I found myself unable to find them.

More clarification from the internet folks and it turns out we simply don’t have any, and it’s anyone’s guess where our tank is venting from or what’s clogging it. The whole tank will have to be removed to find out I think.

In the meantime, the advice was to simply drive without a fuel cap.

Proved pretty effective too. Sally got a lot of her old oomph back. Still the slowest thing up the hill, but not crazy slow.

Fortunately, we’ve got a pretty decent supply of that… and duct tape. So here’s the problem:

We settled on these 3 ingredients :

We duct taped the top of the water bottle over the opening so that the Tyvek(ish) couldn’t get pressed against it and make a seal. Yes, it’s highly unlikely that that would be an air-tight seal, but we didn’t feel like taking any chances. We also notched an edge of the bottle top so that it wouldn’t form a seal if it’s top got covered. 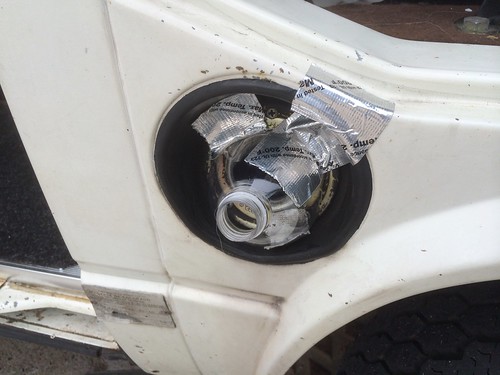 Then, we covered it with the Tyvek(ish) which went up into the inside of the door jamb and left an air vent for venting. 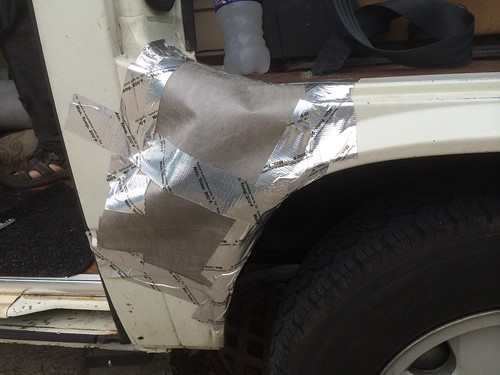 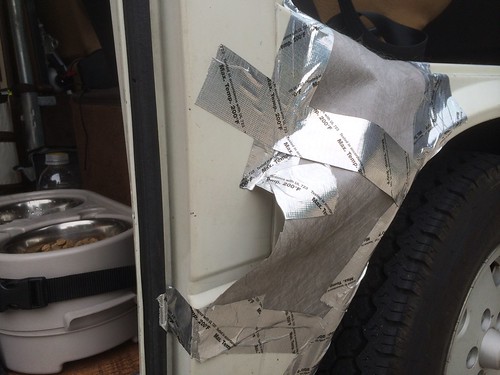 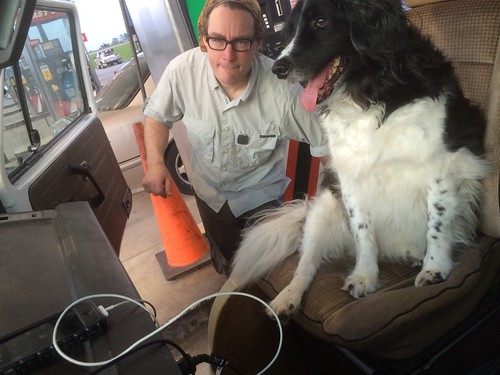 It was suggested (correctly) that this would cause a Venturi effect that might actually suck water in. Later that night in what’s just about the worst downpour I’ve ever seen we were able to confirm that yes, our bodge worked, and yes there appeared to be a Venturi effect, but the bottle top kept out the few spatters that made it back up the vent. 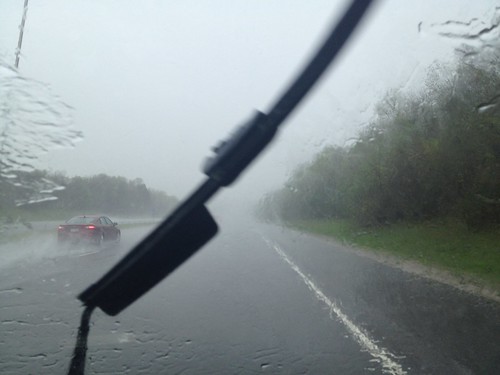 (it was much worse than this)

We spent the last couple nights in truck stop parking lots (they have trucker showers), but last night kind-of sucked because it was about 80°F when we went to sleep, our roof vent leaks (we bodged that with more Tyvek, but nothing sticks to the inside of the roof, so that was interesting), and started off keeping the side windows closed to keep the water out, before saying “Screw it, we’ll risk the moisture” and opening them. Southeast Asia may prove problematic for Dachary, but the 12v fan helped a lot, despite its attempts to drain our battery. I swear the fridge uses less power.

In the mornings though, we wake up to a candy-colored Ben Dog 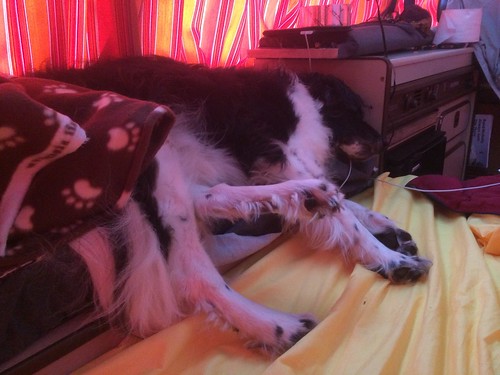 Today we forgot to put away a pack of Beef Jerky when we went in to a restaurant for lunch and Ben ate it all, which is bad because the FDA thinks it’s got a tendency to cause Kidney failure in dogs, sometimes… maybe… they’re not really sure, and the advice is basically watch you dog, cross your fingers, and hope.

So, it’s half-way through Tuesday, four days into the trip, we’ve had our first van issue, and there’s <= 6.2% chance we may have fucked our dog. Also, my lunch kinda sucked, but Dachary’s was tasty.

Post Script: As I wrote this we passed through the 3 corners of Oklahoma, Missouri, and Kansas. The speed limit promptly jumped to 75MPH to which Dachary responded “Fuck You” because we have no hope of going 75, even downhill.

Then a couple people in a BMW pranked a hitch-hiker with a guitar, pulling over ahead of him like they would pick him up, then pulling out once he started to run to catch up to them. Some people are dicks. We’d have picked him up, but the dogs would have attempted to eat him, and we’re not dicks.