The tour of Arenal Volcano was scheduled to pick us up at our hotel at 7:50 and would involve three hours of hiking so we took off in search of breakfast a bit late (as per usual) headed for the Burger King because it was barely 7 and Central America doesn’t really do well with the getting up early thing. Unfortunately, the Burger King was at the far end of town (a tiny town but still) and was closed (fuckers), but the restaurant next door was open and we powered our way through breakfast and hurried back to the hotel, where, three blocks away, we saw a tour van pulling down our street. “oh shit. Want me to run?” … I did. It was our van, and i caught them before they left without us. They were ten minutes early, we ran into the room, grabbed cameras, forgot deodorant and hat (me) and Off (Dachary) and hopped in the van.

Four pick-ups later (one very long as people took time checking out of their hotel) and we were on the way to the volcano. We’d resigned ourselves to not actually seeing the volcano and during this time the tour guide made a couple comments that illuminated the reality of the situation. He mentioned he hadn’t seen it in two months, and that he was so excited last night when the sky was clear because he hoped we’d have a chance to see it, but of course it was cloudy again when he woke up this morning.

Just as we entered the national park though, the clouds broke, and the volcano was revealed in all of its glory before us. It was such a significant event that he had the driver pull over the van so that we could climb out and take pictures right then because it might just go right back into the clouds. I’m happy to report, that it did not. Normally the clouds are down as low as the tree in the middle of that photo. No exaggeration. We really had no clue what we had driven past the day before, and over the next couple hours she began to re-sheath herself in clouds. We saw Lago Arenal from the Eastern end. We saw birds, both common, and rare. And three kilometers of beautiful rain forest, that was only hindered by our constant need to watch our footing. Our tour guide was great. He picked out lots of birds we’d never have noticed, a viper that was nearly invisible, and really knew what he was talking about. Plus, we didn’t have to hike around for hours in our gear, and we got to meet a cool couple who used to live just down the road from us in Cambridge, MA. Sadly, we neglected to give them a card so we’ll probably never encounter them again, but along the way we had great discussions upon how best to prepare the local wildlife. The tarantula preparation discussion was quite involved and eventually we decided that they should be deep fried with a thin batter, pepper, and lemon (served rather ala calimari). We figured that a tarantula hair plucking machine (akin to a automatic chicken plucker) would be a great idea that would make you a millionaire if only you could convince people to partake of the deep fried delicacy. In the meantime, they should be served with hairs intact under the batter.

If you want to do Volcan Arenal yourself it’s definitely possible. It’s $10 US entrance fee for the national park (easy to find), and there are bathrooms and a place to park your bikes just before the trail heads. I think they hand out photocopied maps of the trails too if you don’t have a guide. But, for us, the guide and the ability to hike in pants and normal shoes was worth it.

Also, we found out that the lava you see in all the pictures really isn’t lava. It’s glowing rocks expelled during eruptions which fall down and break apart into a stream of tiny glowing rocks, that from a distance look like lava. If you want to see it it’s recommended that you don’t bother with a tour. Just wait for a clear night when it happens to be erupting, hop on your bikes and ride to the observation bridge / deck thing, and watch for free, because that’s all the “lava” tours do. It turns out that many of them simply park you next to the bridge we crossed coming around Lake Arenal – we’d already seen the observation point. We pondered heading out there tonight to see if we could spot any glowing rocks, but alas, she has clouded over again and it’s impossible to tell there’s a volcano there anymore.

We were back in our hotel by 12:30 and had the rest of the day to chill (literally… in the AC) find food, write up posts, do a little work, find more food and ponder sleep.

Our Tag Line for La Fortuna? “There’s a volcano RIGHT THERE!!!” And this is why… 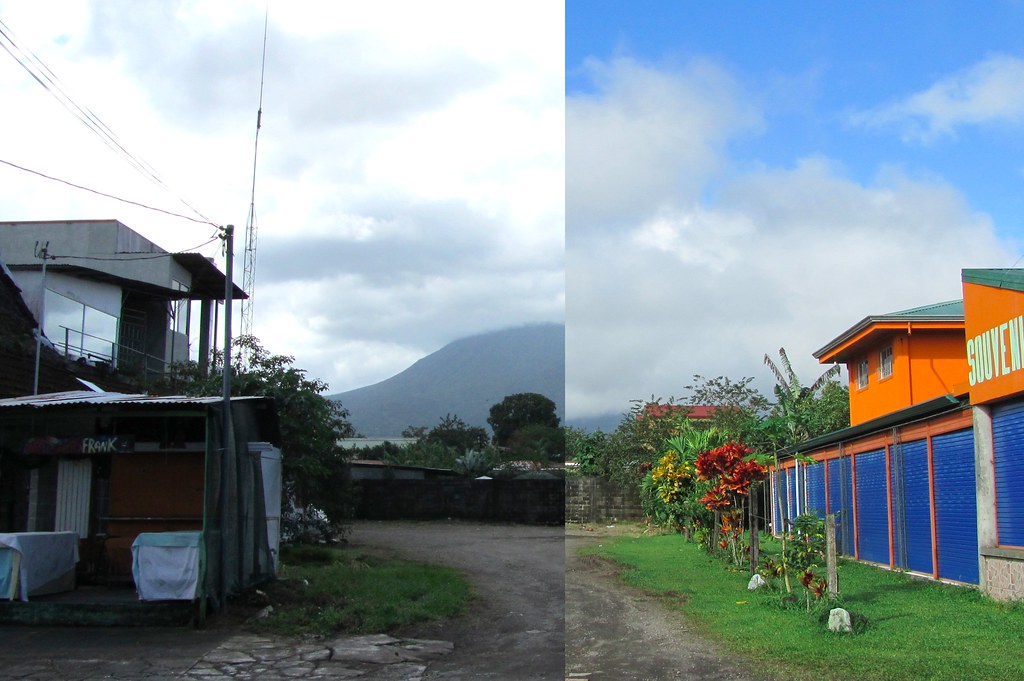